Senua’s Saga: Hellblade II developer Ninja Theory have insisted their use of AI voice acting is only for “placeholder content.”

A developer submits a recording or text of what they want said, along with tone, accent, and numerous other factors. Then, a library of 20 professional actors and hundreds of “common” voices help produce a “performance” which can be adjusted as needed. Text-to-speech can also be used.

Altered AI CEO Ioannis Agiomyrgiannakis stated “I never believed in human replacement,” and compared the technology as something to assist, like a car helping you move faster or a forklift to carry more. “What we are making are tools that allow people to do performance by themselves.”

“People in the gaming industry use us for prototyping. When you have a dialogue, you have a level of imagination. But when you take the dialogue to the voice actors, it comes back and doesn’t sound as dynamic as you wanted it to,” Agiomyrgiannakis explains.

“So there’s a gap between how the writer imagines the dialogue, and how the dialogue plays out. We provide an intermediate step where they can prototype the dialogue and have a checkpoint before they hit the studio,” Agiomyrgiannakis pitches.

News.com.au admitted that trained voice actors may be insulted that a voice director would rely on an AI to tell them what they want, rather than utilize their skill and expertise in their field. Sarah Elmaleh, who voiced Lizzie Carmine in Gears 5, shared her scorn, and how “line reads” — the director saying the line exactly how the actor needs to copy it — is a last-ditch effort, as it results in the performance sounding “dead on its feet.”

“Great dialogue doesn’t just come from the mouth, it comes first from the heart. Mouth-to-mouth is good for CPR, bad for acting,” Elmaleh quips. Roger Clark, Arthur Morgan in Red Dead Redemption 2, felt that while “humanity cannot be digitised,” he admitted when AI could imitate a real person’s performance and authenticity “then we’re in real trouble.”

Cissy Jones, Delilah in Firewatch, insisted that “a synthetic performance is soulless by definition,” and would be devoid of the “creative spark” and “emotional immersion that gamers and broader audiences deserve.” Even the 20 professional voice actors who submitted their voices to Altered AI reportedly kept their anonymity to prevent scorn from others in their profession.

Just 24 hours after the original report, it seemed Ninja Theory had caught some flack. In reply to one Twitter user asking “Hey @NinjaTheory, are you actually considering replacing human voice actors with AI?” Ninja Theory revealed the AI voice acting was merely a placeholder.

“No. For clarity, we use this AI tech for placeholder content only to help us understand things like timing and placement in early phases of development,” Ninja Theory claimed. “We then collaborate with real actors whose performances are at the heart of bringing our stories to life.” 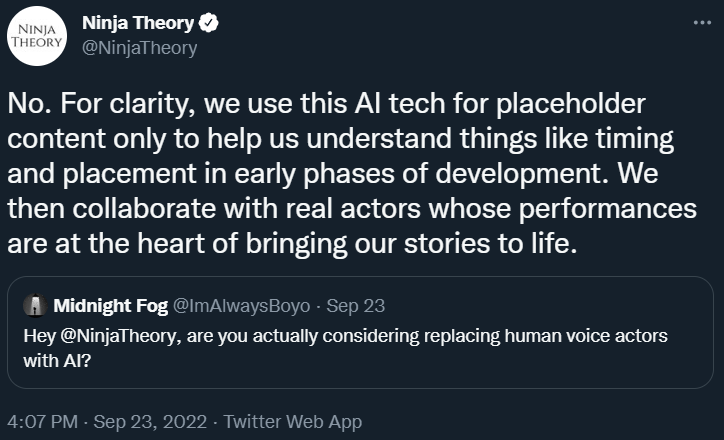 It can only be assumed Ninja Theory utilized AI that mimics professional actors for more than timing, as Agiomyrgiannakis explained with the aforementioned performance prompts. News.com.au even noted in their report that Ninja Theory cast their own video editor Melina Juergens as Senua in the first Hellblade, after her voice fit so well even in a prototyping stage.

Even after Ninja Theory attempted to quash potential outcry, others have continued to discuss the role of AI in creative endeavors. Luke Skywalker was added to The Mandalorian, James Earl Jones as Darth Vader will continue after the actor retires, art is being created through services such as Stable Diffusion, and Deep Fakes continue to add actors and actresses into impossible roles.

NEXT: Rumor: The Joker From ‘Batman: The Animated Series’ Is Joining ‘MultiVersus’ And Reportedly Being Voiced By Mark Hamill