Fans of the long-running  Street Fighter series suspect that Reuben Langdon, the actor who had been providing the voice for Ken in recent entries, was replaced due to his views on politics. 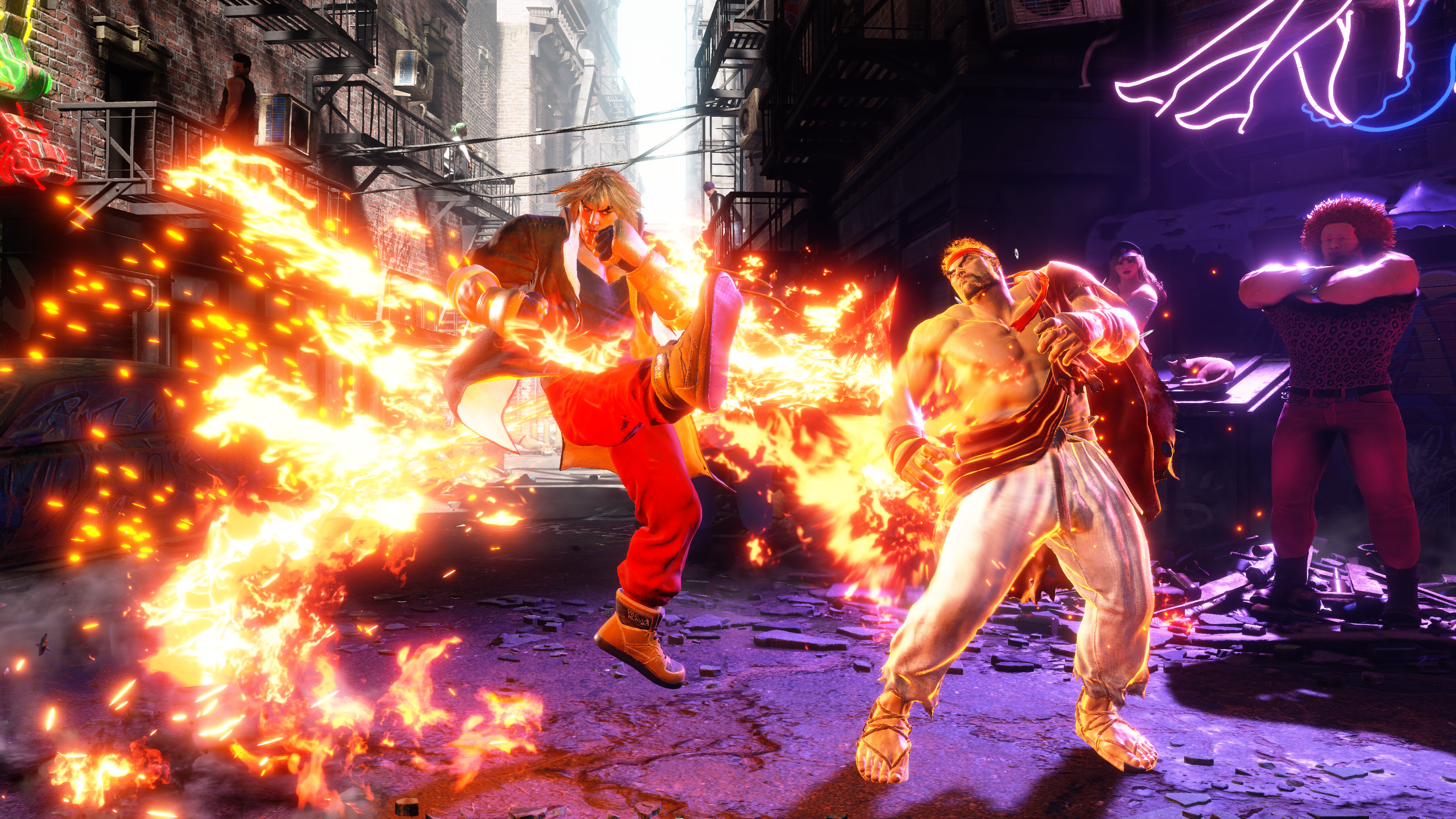 After the reveal of Ken Masters, David Matranga — Shoto Todorok from My Hero Academia and Dante from the Devil May Cry series, amongst others — revealed he was voicing the character.

“Been holdin’ on to this one, brimming with excitement for a while now. I’m the voice of Ken Masters in [Street Fighter 6],” an elated Matranga announced, before proceeding to thank Capcom USA as well as Localization Manager Andrew Alfonso and voice over studio New Generation Pictures. 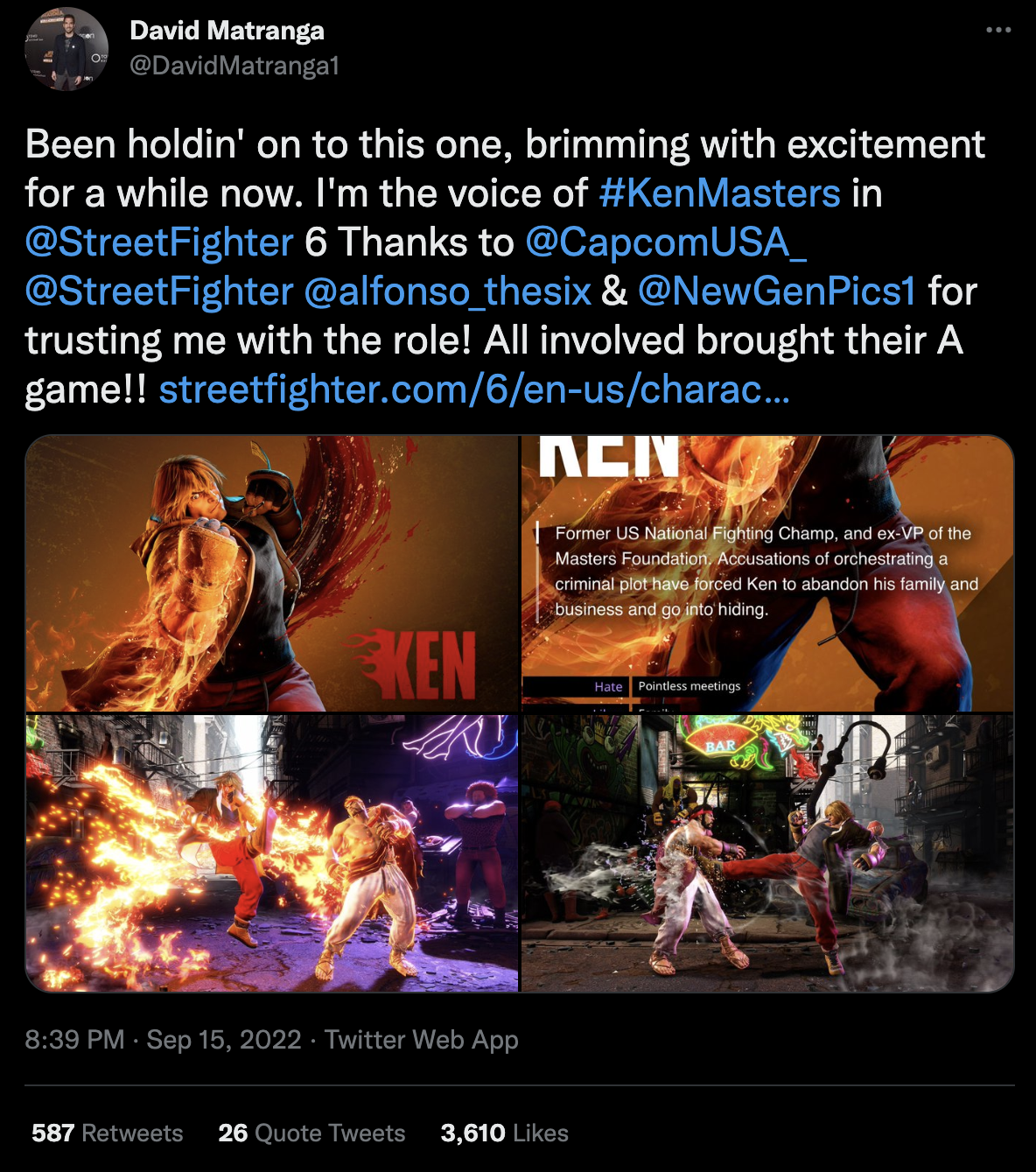 He began with some heavy commentary on recent events however. “We are going through an amazing transformation on the planet right now. Many difficulties will lead to Chaos and tragedy but in the end it is the over coming of these hard times that will make humans shine once again. #SF6” 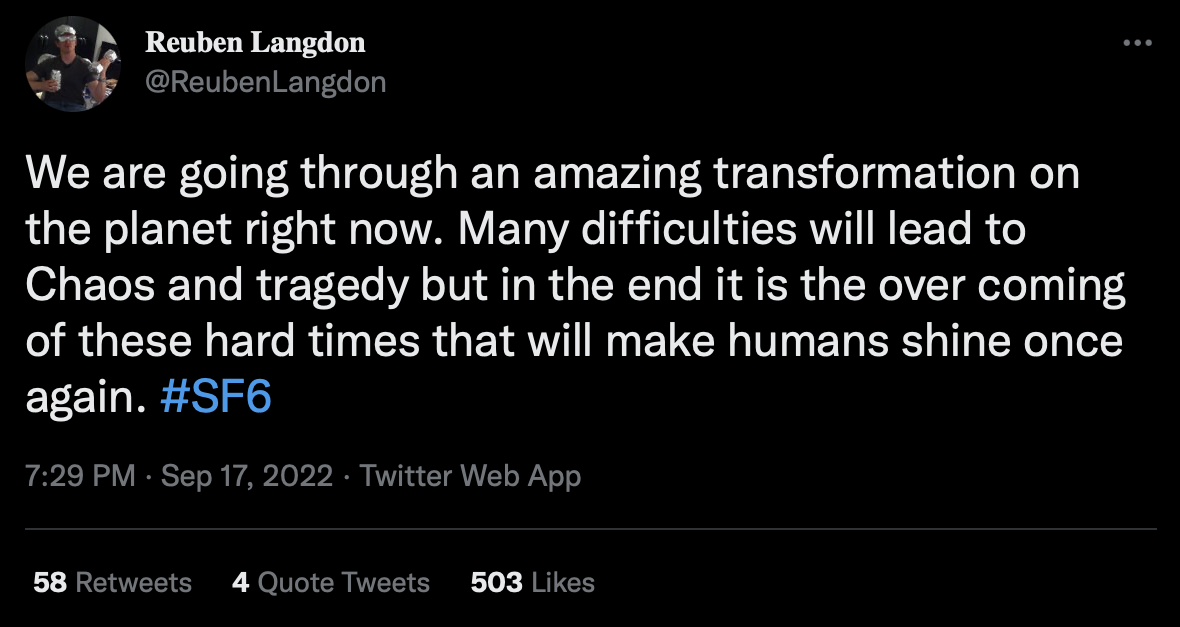 Focusing on the game, Langdon added “I am sad to no longer be the voice of Ken because he is a character dear to my heart. There are many lessons here in this situation.”

“I tried my best to be epithetic to people on all sides but I must be myself no matter what and continue on my own journey,” he lamented. 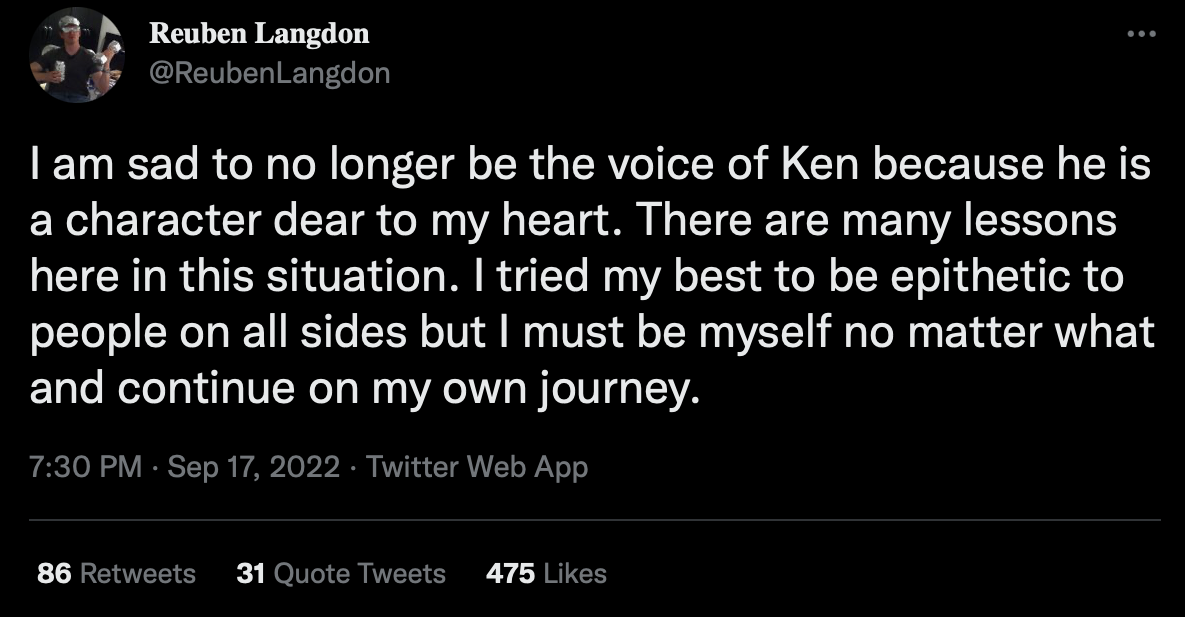 “I do not own Ken, he is property of Capcom,” Langdon further declared. “I am happy to have added my essence to the different versions of him over the years, I was not the first Ken and certainly not the last.”

“Hopefully the next actor will take the character to the next level and the audience will continue to love the Legend that has become Ken Masters. Shoryuken!” concluded an optimistic Langdon.

Voice actors for established character being replaced can generate discussion; even more so when long-time actors are the ones being replaced. It may be plausible, however, this surprising replacement may have been prompted by opinions expressed by Langdon on social media; opinions some may deem controversial.

In 2019, for instance, Langdon caught some flack after supporting and praising the work of fellow voice actor Vic Mignogna, who had lost work over sexual harassment allegations, and also entertained the idea of hosting a panel with him. 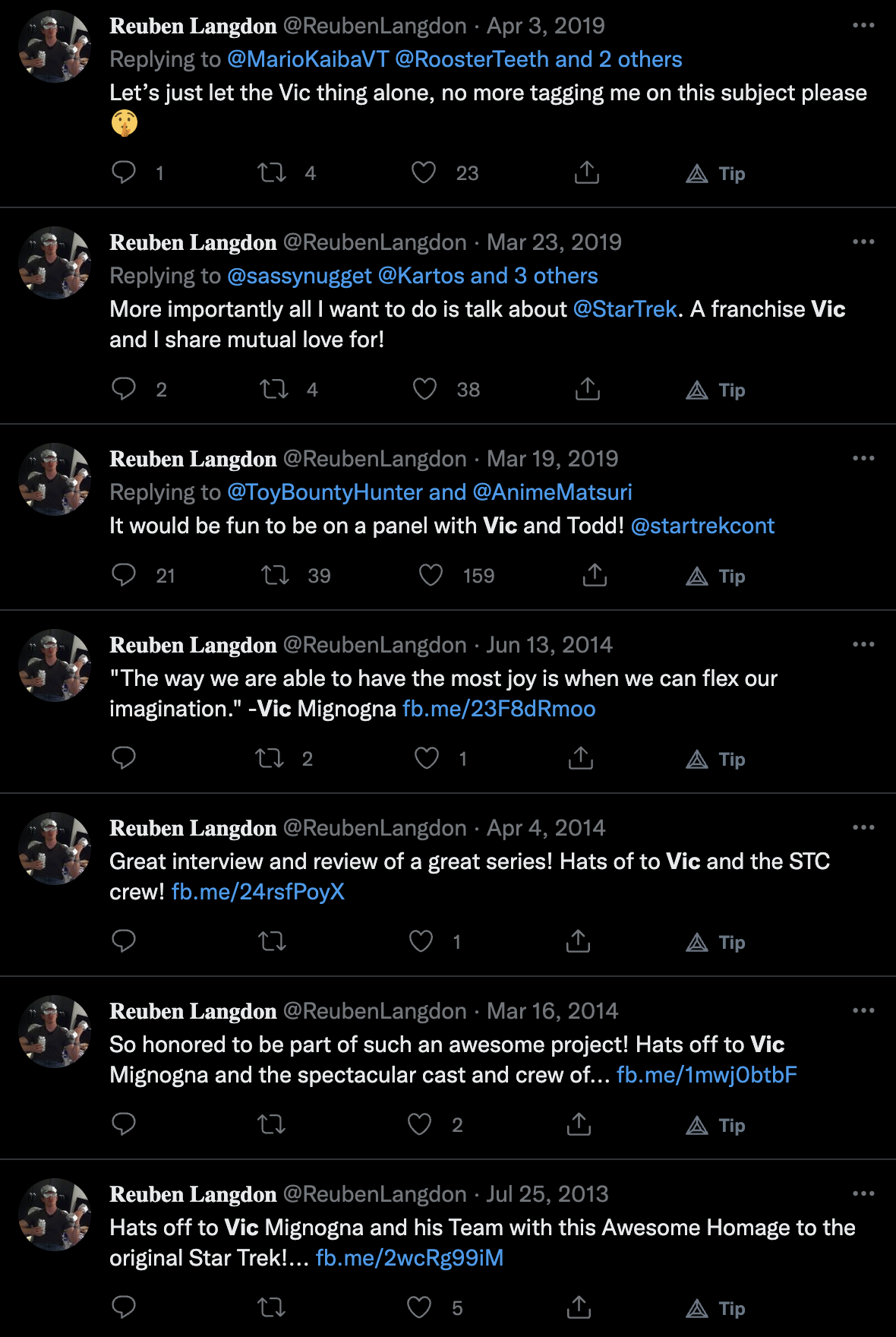 More recently, Langdon has drawn the ire of the social media mob by expressing his political beliefs on Twitter — particularly when tackling subjects like the January 6th Capitol Hill protests and the draconian mandates imposed during the COVID-19 pandemic.

“‘Censorship is to society what cancer is to the human body. Those who burn books today burn bodies tomorrow,'” wrote Langdon on the 1-year-anniversary of the Capitol Hill protests, citing the words of 19th century German poet Heinrich Heine.

Under the same thread Langdon initiated, the voice actor asked for proof that then-President Donald Trump actually incident people to start a riot and storm Capitol Hill on January 6th;  even condemning Trump as a “con man” and labelling protesters as “A-holes.”

“Show me proof where Tump said storm the capital and I will apologize. Now trump does know how to stir the pot and get people riled up. He is a con man. But it’s a small group of A-holes who did the damage. Now we has to suffer with the loss of our freedoms?” 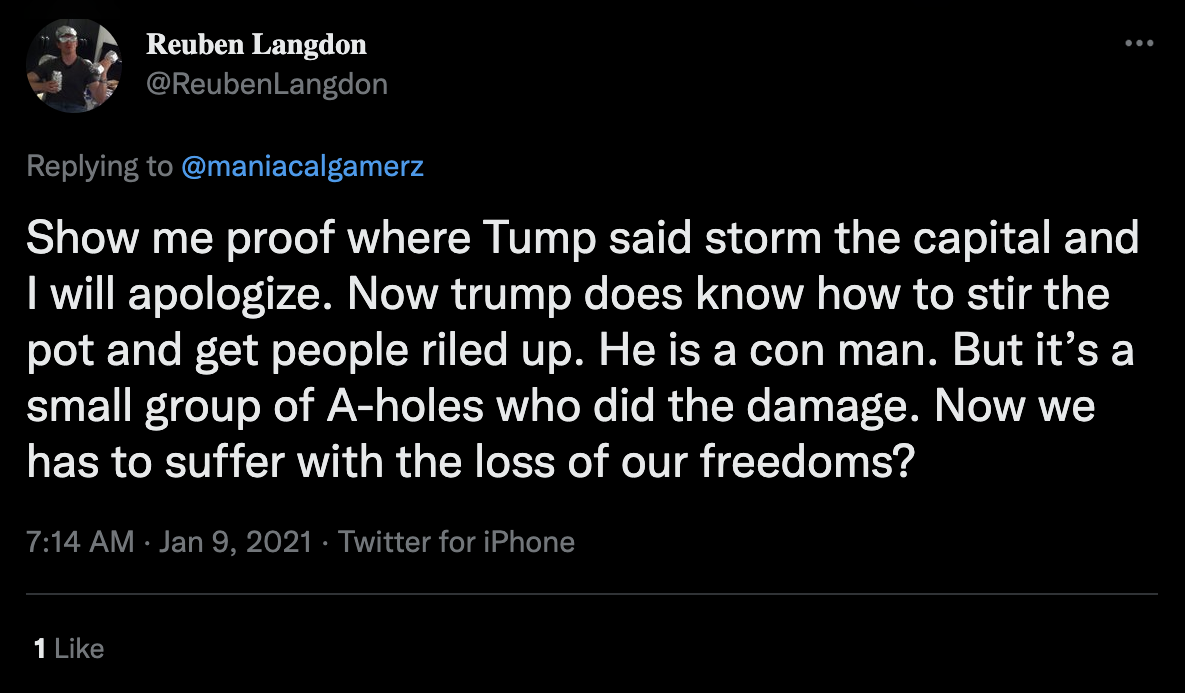 Responding to a tweet that mentioned a recent study conducted in Sweden that concluded Pfizer’s COVID-19 vaccines could alter the vaccinated individual’s DNA, the voice actor declared, “These are not new studies, They were coming out almost a year ago. ”

“Nice to see people finally talking about it publicly though,” he added. 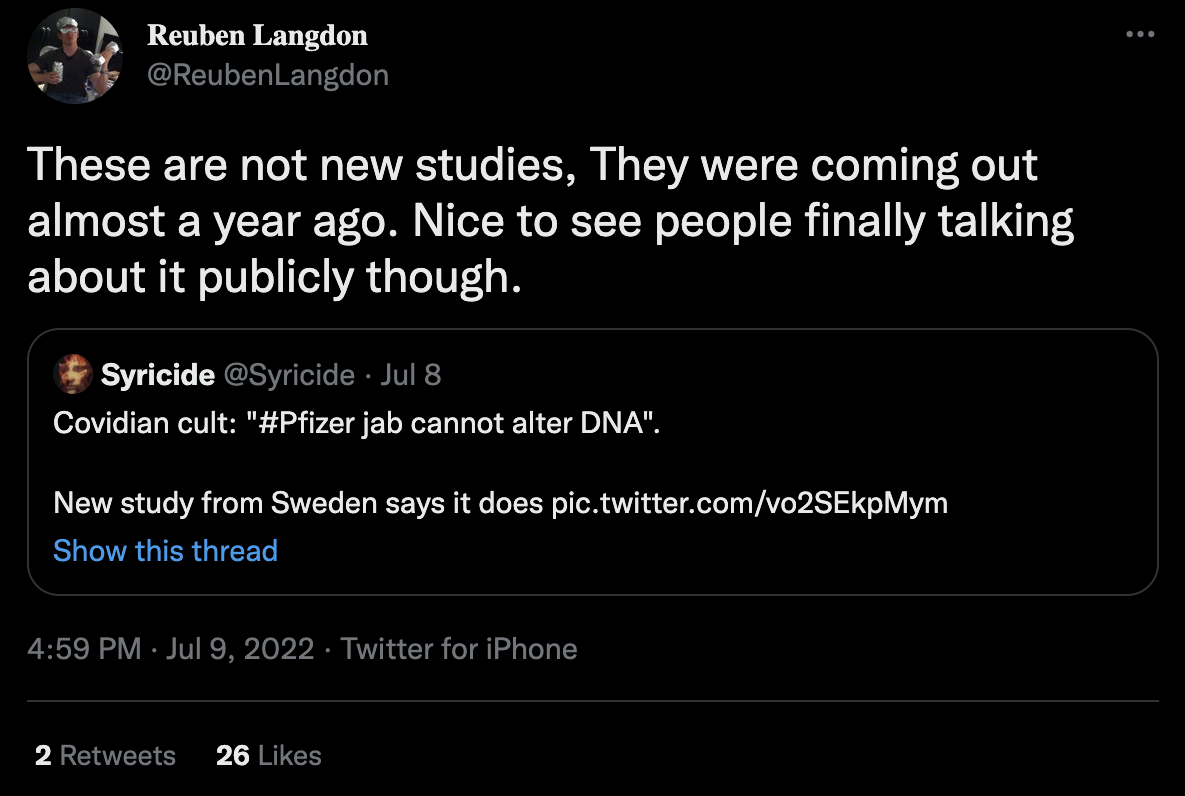 Doubling down, Langdon proceeded to share a link to an article published by The National Pulse that covered a new  study conducted by the New England Journal of Medicine.

The aforementioned study, titled “Duration of Shedding of Culturable Virus in SARS-CoV-2 Omicron (BA.1) Infection,” concluded that unvaccinated individuals remain contagious with the virus less time than those who are vaccinated against COVID-19. 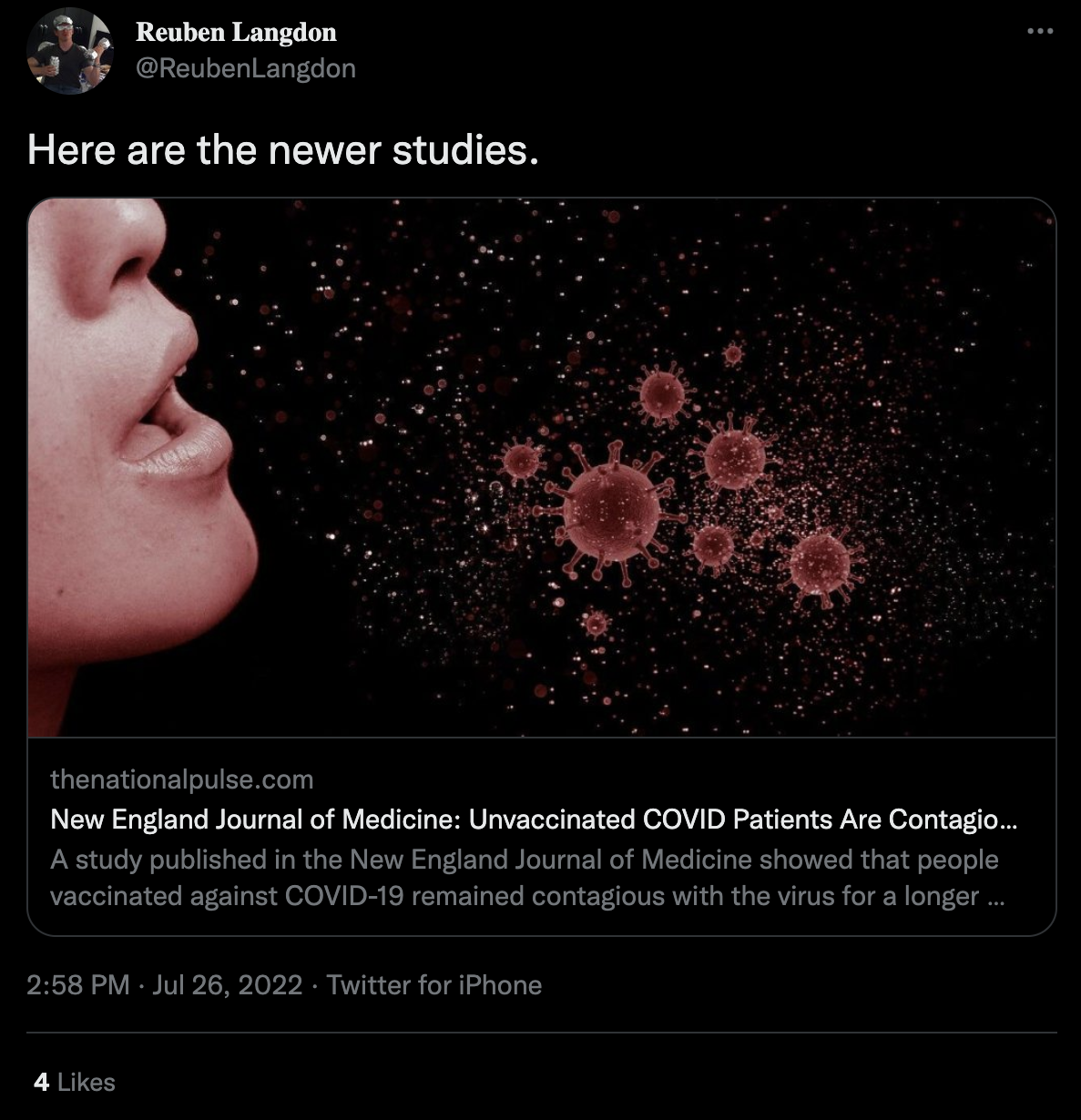 “As the so called leaders of the world try to bend the agreed upon laws of the land, they expose their true agendas,” asserted Langdon as he questioned the fact that hundreds of U.S. Marines were denied their religious exemption requests that would have prevented them from receiving the COVID-19 vaccine and risked being discharged.

He went on, “Don’t be a pawn in the control game. Know your rights, and own your sovereignty.” 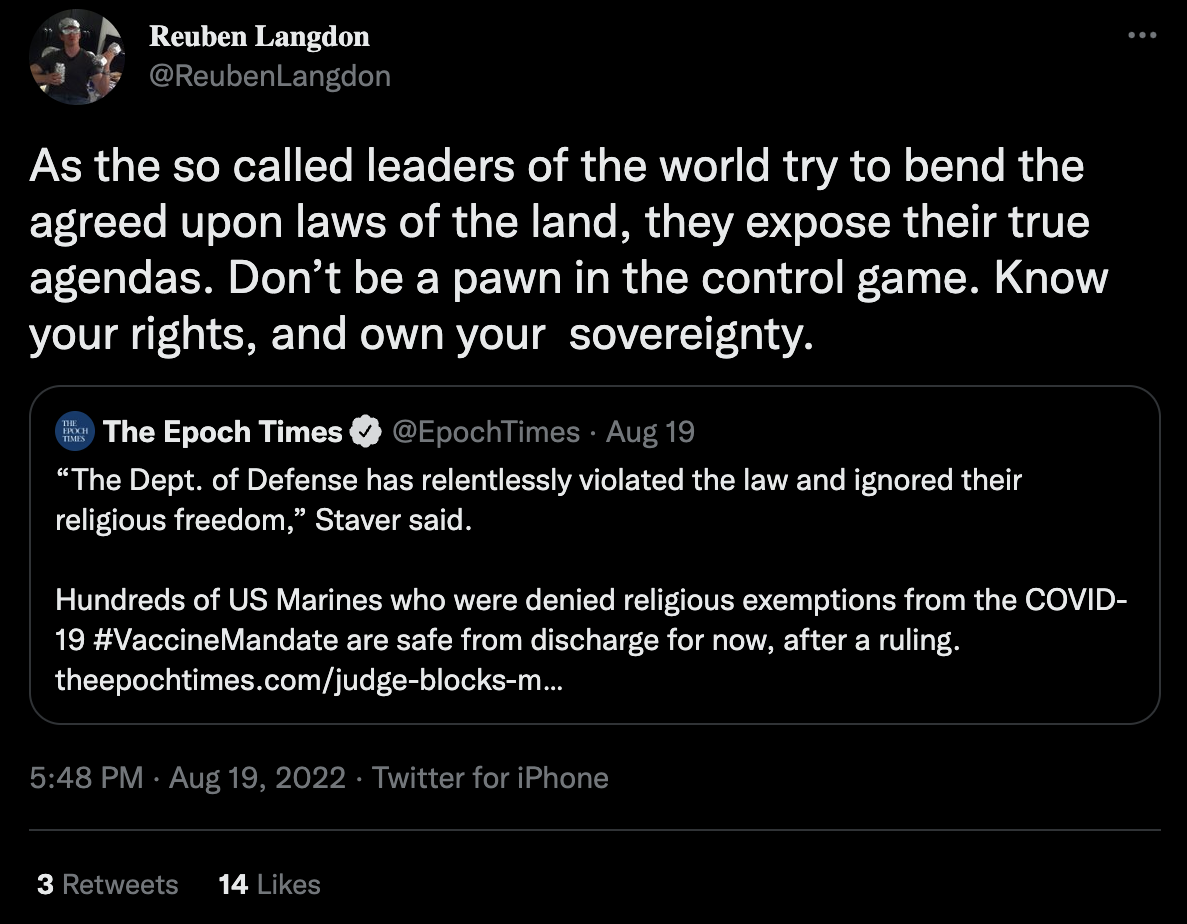 Just last week, the voice actor took to social media to, once again, fervently condemn censorship in all of its forms, sharing the testimony of Tawny Buettner during a recent San Diego Board of Supervisors meeting, a pediatric nurse who was fired for questioning the hospital’s mandates; noting that several cases of children allegedly suffering from myocarditis after they were vaccinated were not reported to the Vaccine Adverse Event Reporting System.

Censorship is a cancer to society! https://t.co/NEKSAjTxio

A fair share of users took to social media to speculate on the reason behind Langdon not returning to reprise the role of Ken in the upcoming Street Fighter title; noting that it may have been the voice actor’s views on politics that made Capcom replace him. 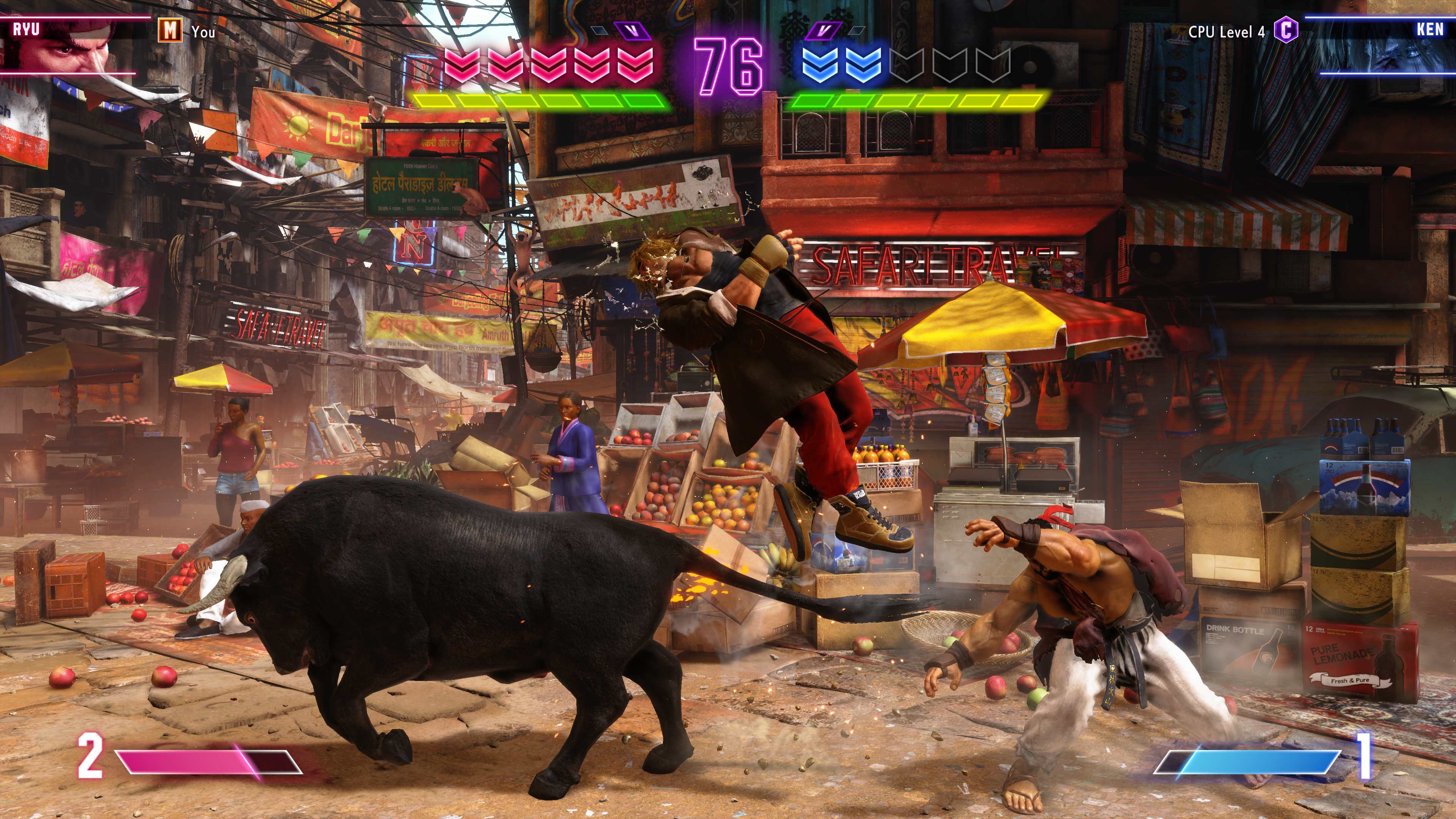 “Its sad that you get recast for having opinions different than the mainstream, but actual PREDATORS like Daman Mills are welcome with open arms in the english dub industry,” wrote one frustrated user, adding, “As well as VAs who openly attack fans. Its ridiculous.” 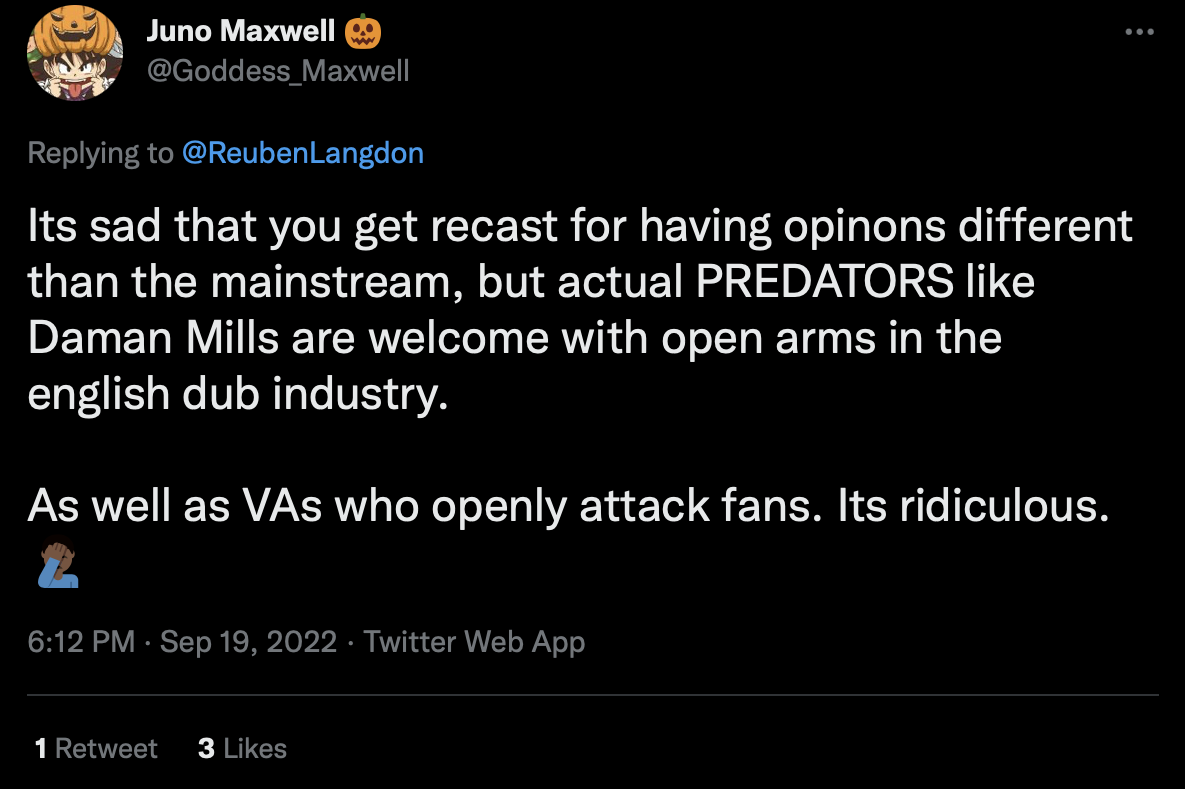 “Well, this is really sad,” lamented @KOHEIYA2. “I was actually really looking forward to the game, but now I’m not so sure. It’s awful for someone to lose their job over political opinions.”

Twitter user @Revolthell asserted in disappointment, “That sucks you’re not in SF anymore because hearing you say SHORYUKEN was so awesome.”

“I understand many find your views outlandish but if you’re ever replaced as Dante I’m out,” the user concluded. 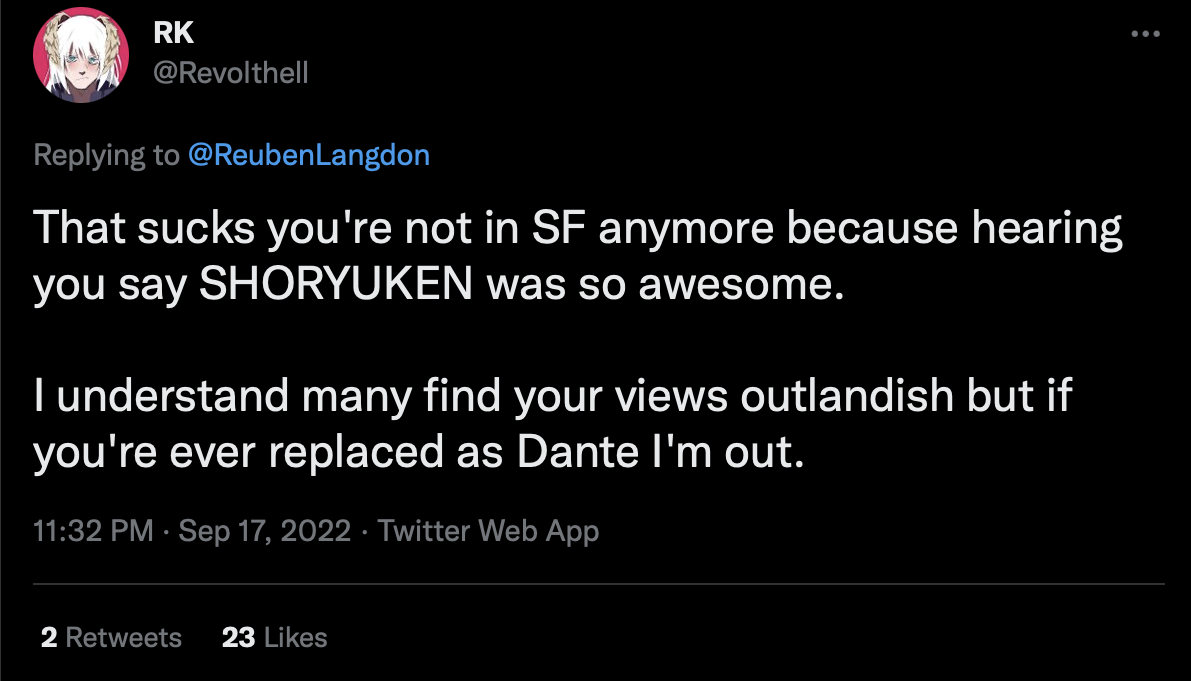 “I’m sorry, dude. I hate that we ended up in a place where entire industries are gatekept by politics…” declared @SpaceCorgi08.

Another user disappointed in Capcom’s decision to replace Langdon tweeted, “I will not be purchasing SF6, [Reuben] has been the voice of Ken for many years now. This is imo pathetic you can’t even have your own opinion and express yourself. SF6 could kiss my a—e.” 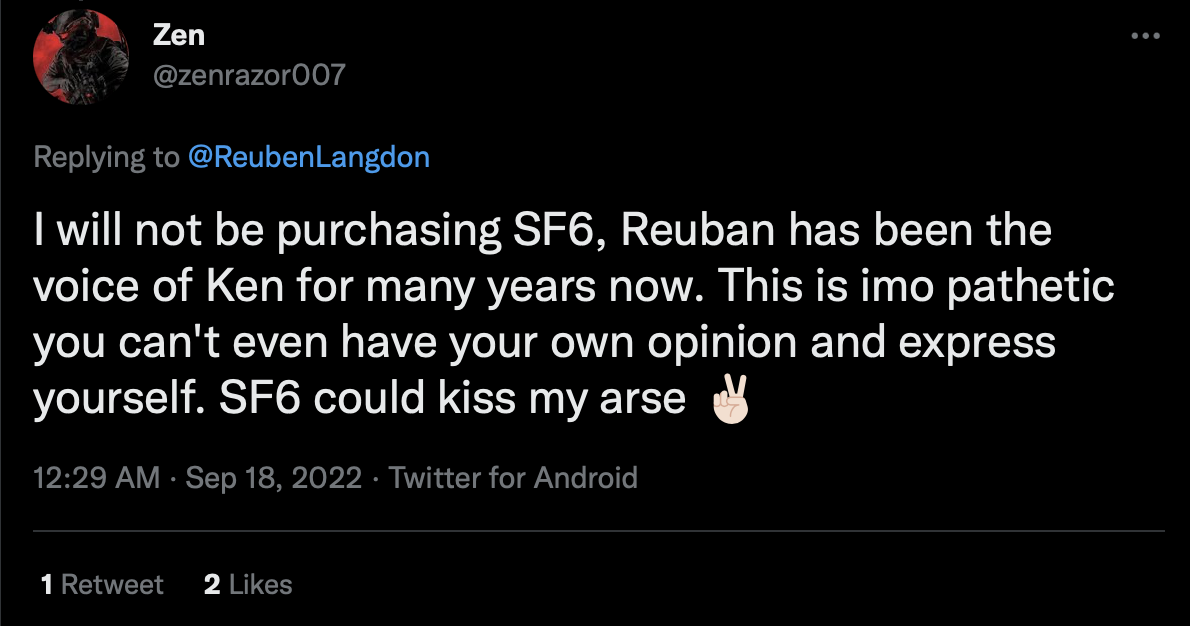 “It’s a damn shame that you have lose your role for petty reasons,” lamented @Mikedot12, before throwing some support behind the voice actor. “But as they say: When one door closes, another one shall open.”

The user concluded saying, “Hope to hear your voice again in another noteworthy video game project!” 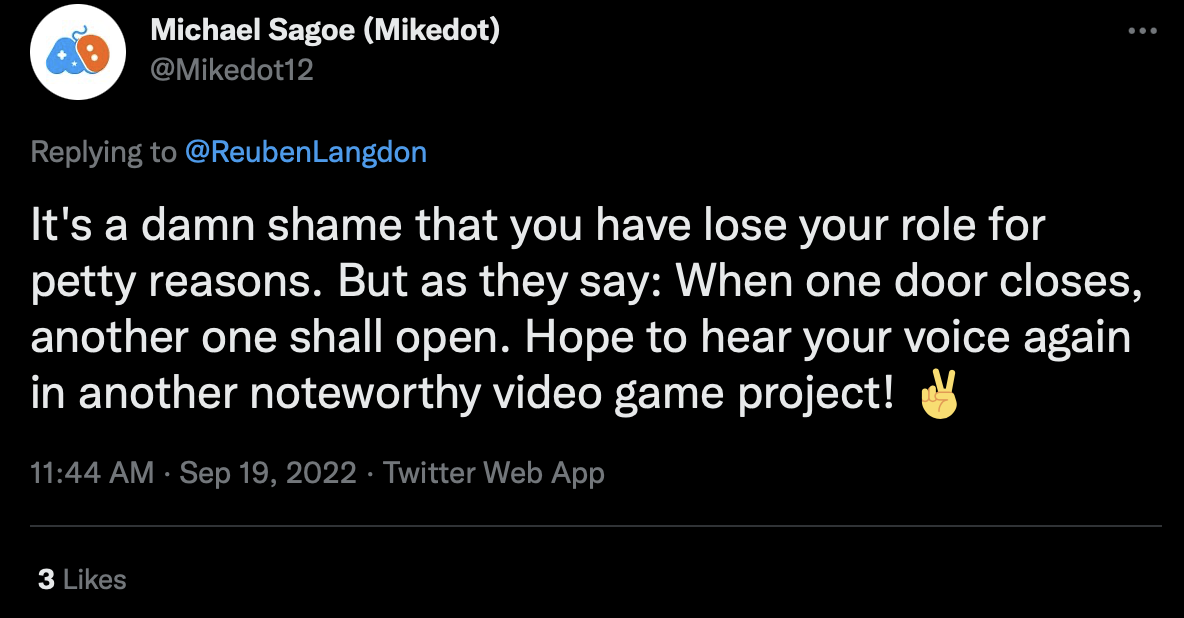 In spite of fan speculation, the only real indication of the developer taking this course of action can likely be attributed to 2020’s Capcom ransomware leaks. Supposed internal documents were leaked online, revealing business strategies that had been touted as “politically correct.”

Specifically they dictated to game designers on how to avoid controversy, such as avoiding sexism, offensive stereotypes, positive LGBTQ representation, and avoiding content offensive to specific regions and cultures. This arguably manifested in the censorship of slightly racy dialogue in Resident Evil 4 VR, with the initial leaker claiming this was requested by “OculusVR and with the approval of CAPCOM.” 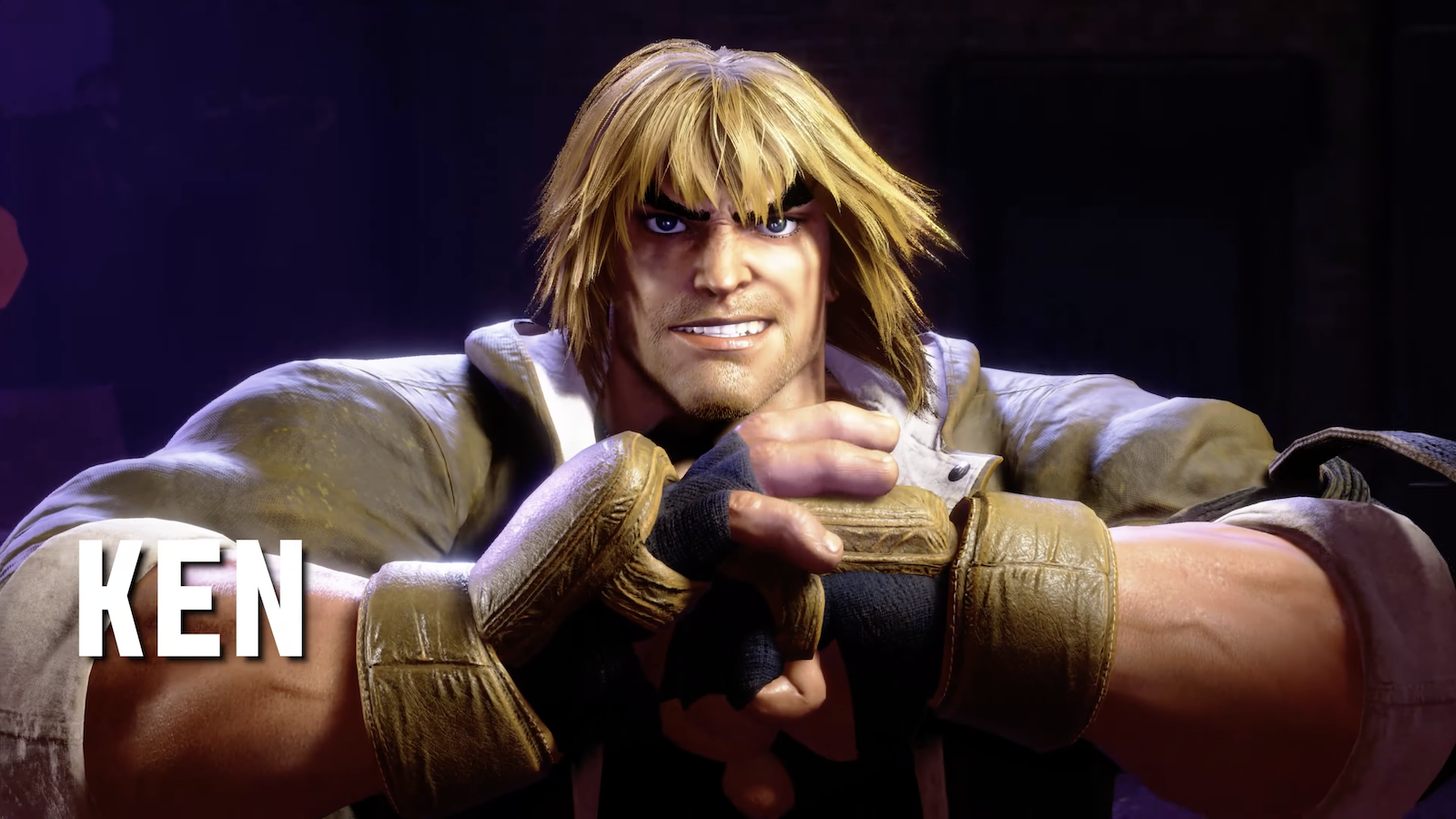 Reuben Langdon actually addressed fan speculation under the comment section of an tweet by Niche Gamer, linking to an article that suggested Capcom had cut ties with the voice actor over differing political views.

“Everyone is always looking for a fight…right Vs left, jab vs no-jab, what if it was more complicated? …not so black and white?” the voice actor proposed.

He added, “You brought up some good points, but there is always more to the story…one day perhaps the world will know?” 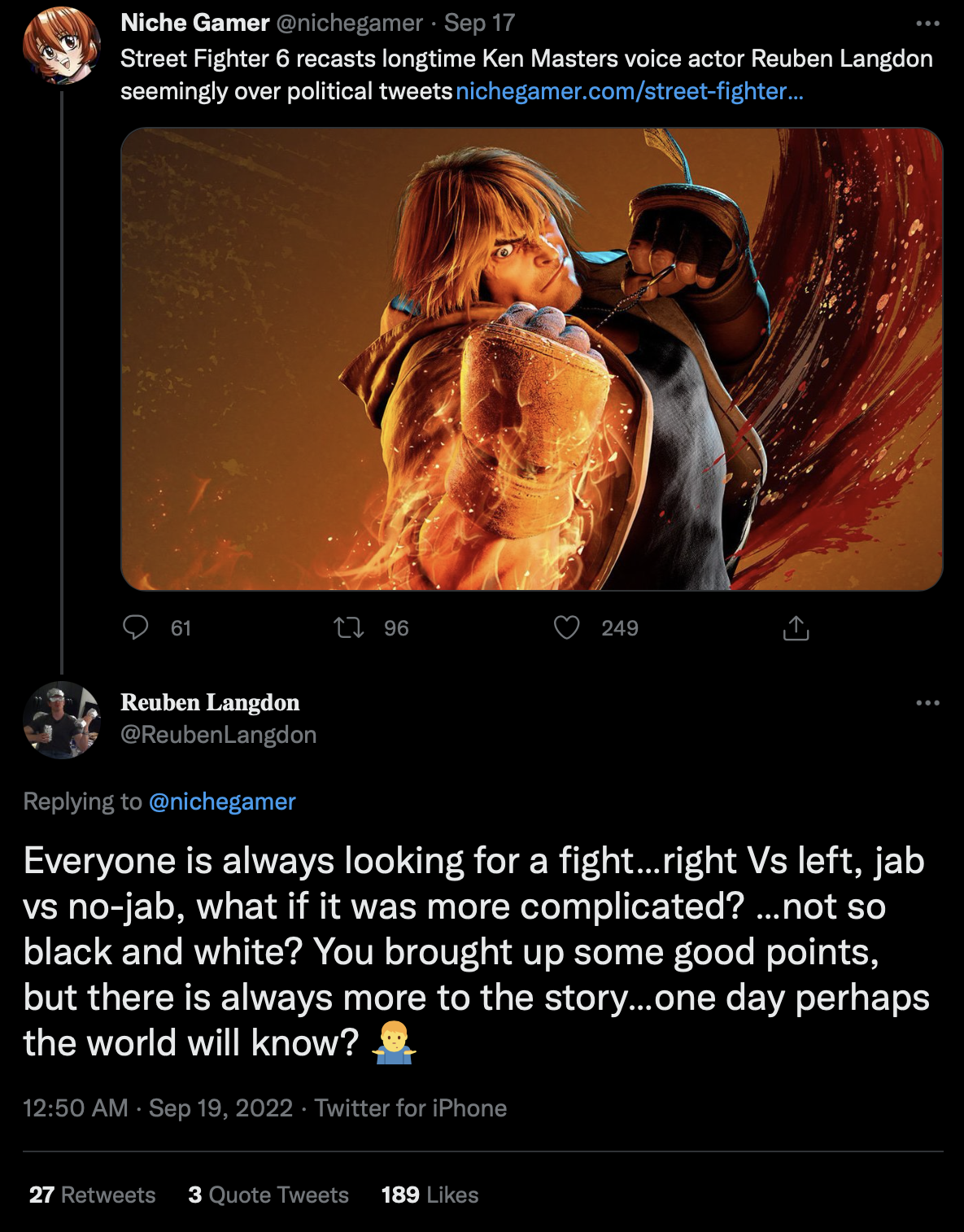