It seems grudges run deeper and are even saltier than the Dead Sea, as the recent announcement by Anime Matsuri and Vic Mignogna that they have partnered to open a new dubbing studio has drawn outrage from the voice actor’s usual critics. 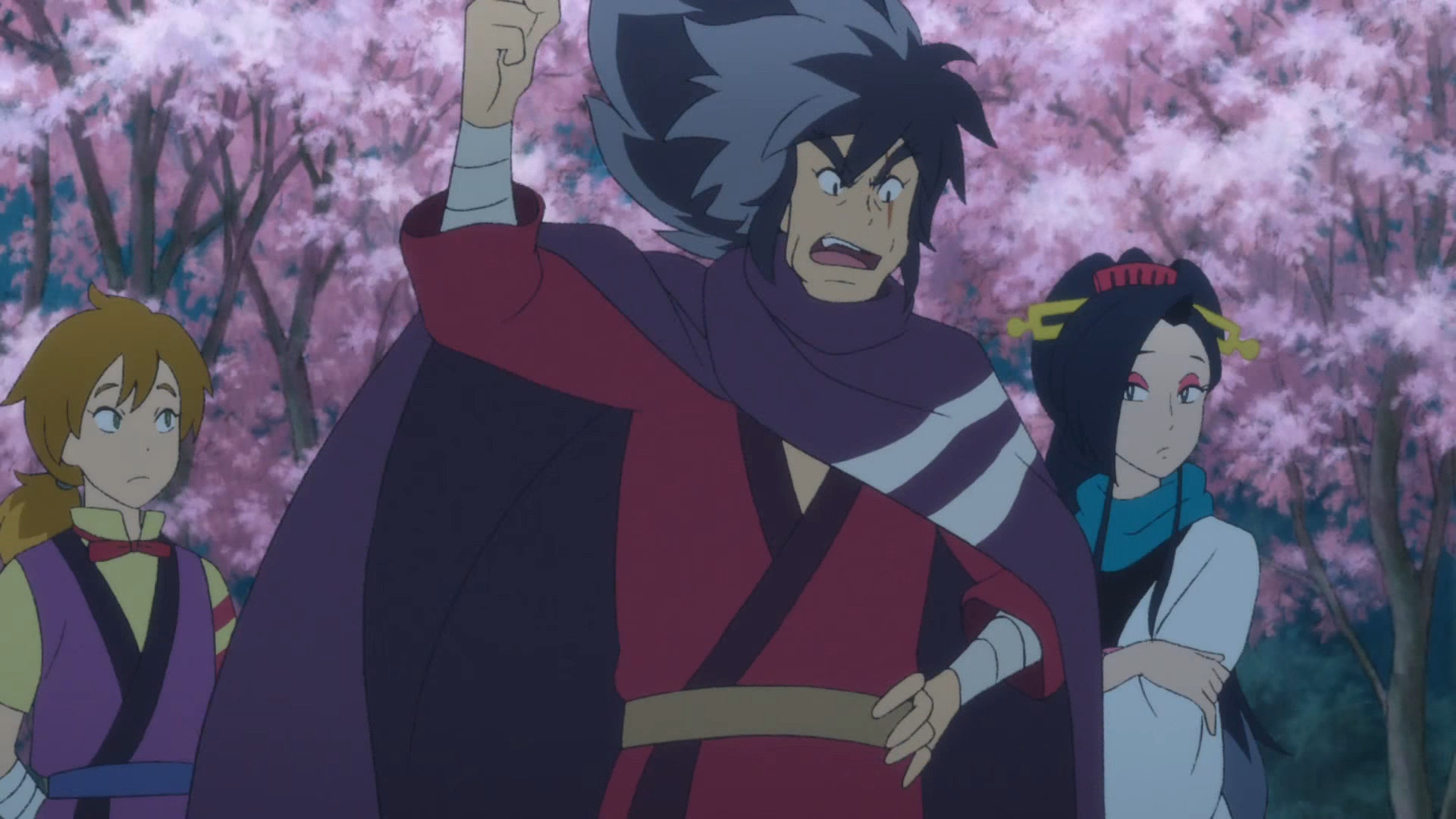 Established in November 2021 and officially revealed by Anime Matsuri and Mignogna via a special livestream on July 17th, the new studio has already begun recording content, with their first confirmed efforts being the English-language dubs for two Nippon Animation films Zip Shimezo and Genbanojou. 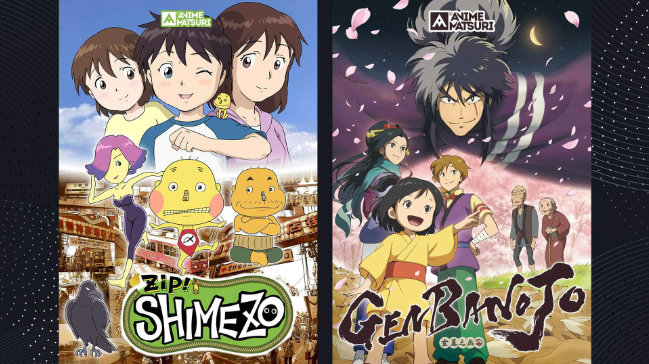 Alongside Mignogna, the live stream revealed several additional voice actors who had signed on to contribute their voices to the two dubs. 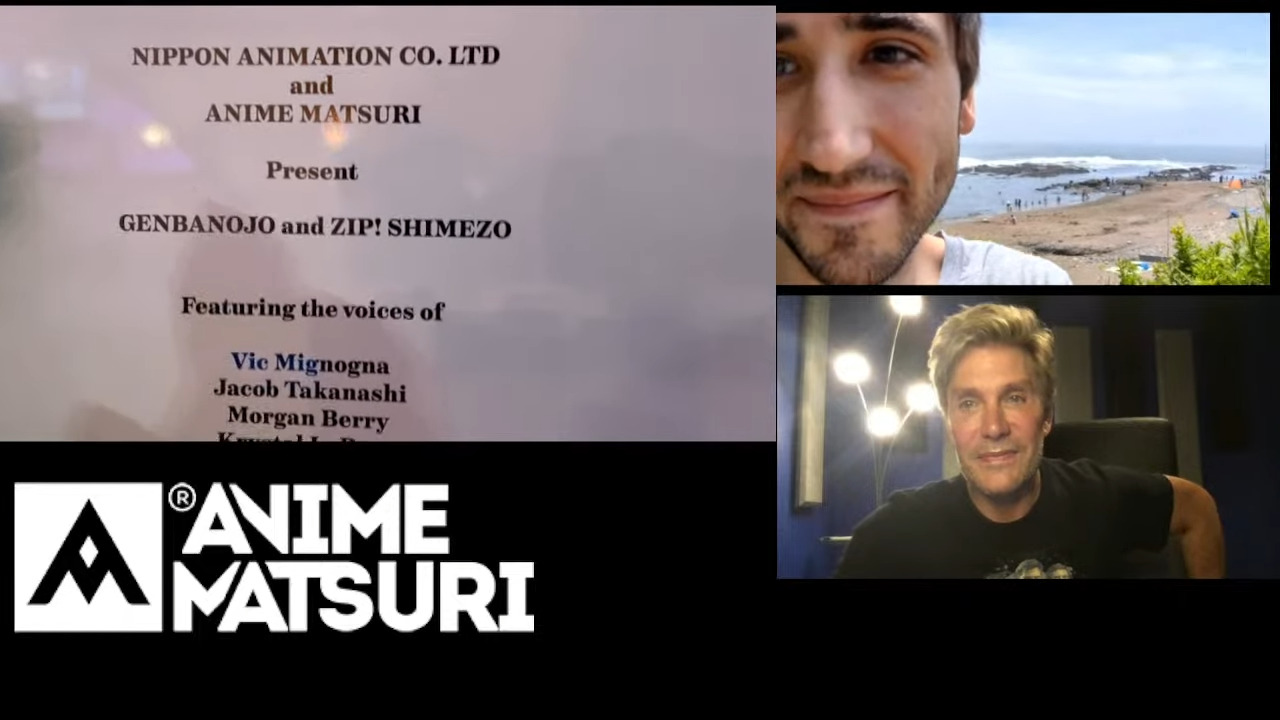 Unsurprisingly, this announcement drew backlash from a number of Mignogna’s detractors, including many of those who supported his black listing from the anime industry following his being accused of sexual misconduct by fellow voice actors Monica Rial (the current voice of Bulma in the Dragon Ball franchise) and Jamie Marchi (Rias Gremory in High School DxD) in 2019.

The outrage-fest was kicked off by Twitter user @TopTierDubClips, who near immediately after the live stream publicly declared, “The idea of Anime Matsuri creating a dubbing studio to dub obscure old anime out of spite that Vic was blacklisted from the industry doesn’t surprise me. But I’m appalled and astonished anyone reputable would even want to take part in this.” 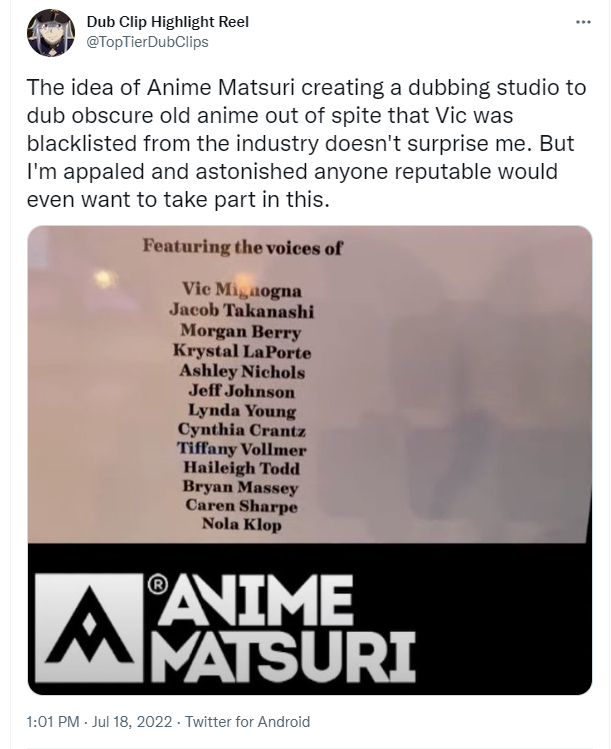 In response to this tweet, prominent proponent of the #KickVic campaign Lauren “Renfamous” Cooper opined, “Well that’s a surprising and somewhat disappointing list of VAs who signed on with the Anime Matsuri/ Vic Mignogna pervs incorporated dubbing studio”.

@TopTierDubClips post was then retweeted by former Channel Awesome content creator Kaylyn “MarzGurl” Saucedo, who added her own thoughts regarding Mignogna’s return to voice acting.

“A Voltron of bad people coming together so Vic can return to anime was the only way we knew it was going to happen, so that’s not surprising,” she wrote. “That other VAs are on board with either AM *or* Vic is extremely disappointing. Vic is the ADR director, & this debuts at [Anime Matsuri] in >2 weeks.” 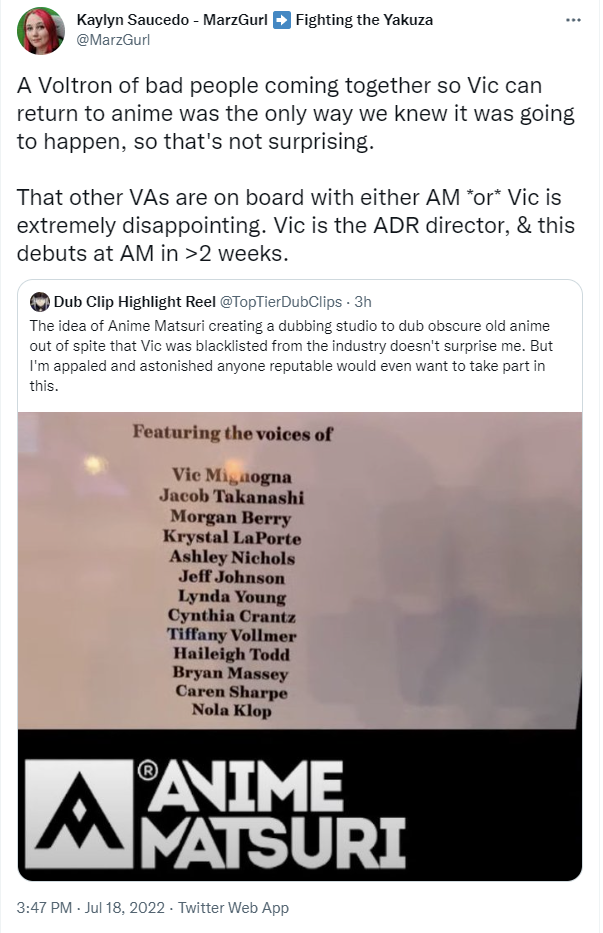 Saucedo then proceeded to set her sights specifically on Klop, taking note of a tweet made by the voice actress in which she voiced her own excitement regarding the project by writing, “STOKED to announce I’m the voice of Chiyo, Hana’s sweet but sassy great-grandmother in the upcoming English dub of Genbanojo, a beautiful anime movie from Nippon Animation based on a Japanese folk tale! It’ll premiere with a Q&A after at Anime Matsuri on July 29th!”.

“At least one voice actor does not seem to take issue with this,” began Saucedo before proceeding to take any of Klop’s attempts to limit her own harassment as a tacit admission that the project was being mishandled.. 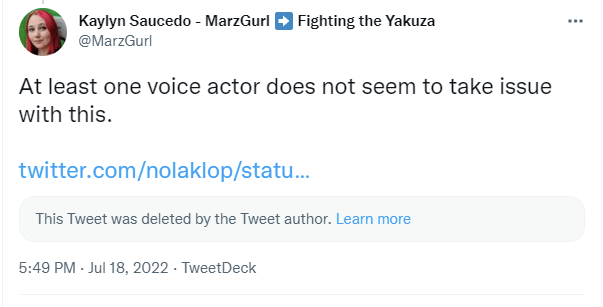 In reply to user @MrBlackofSB, who shared a screen shot confirming that Klop had blocked their account and accused “she knows”, Saucedo asserted, “That doesn’t seem good.” 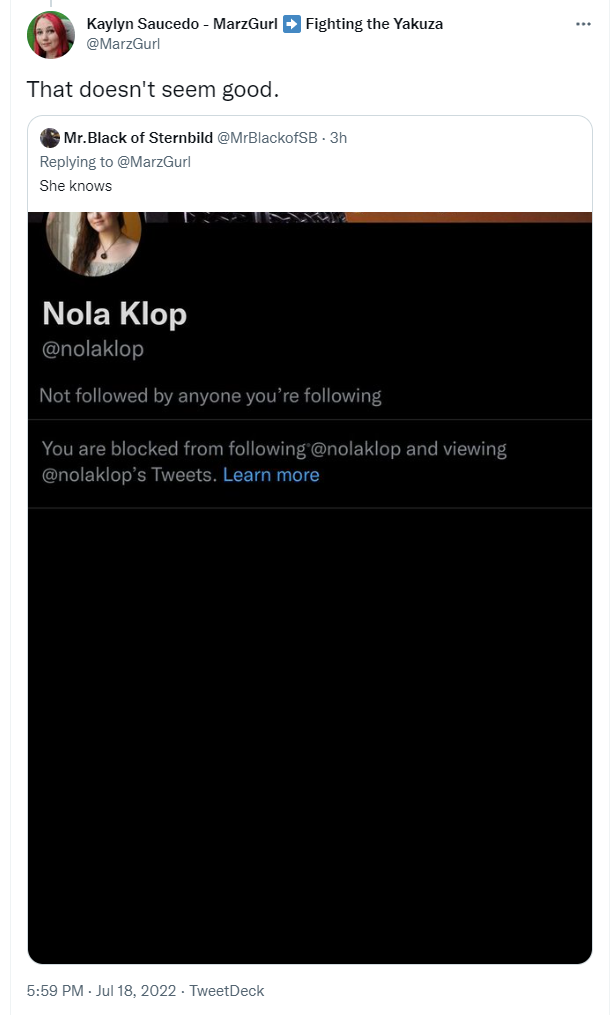 Informed by @MrBlackofSB that Klop had hidden a reply authored by themselves where they had asked, “Are you aware that the ADR director for this is a known sex pest who tried to sue his victims into silence? Just thought you might wanna know,” Saucedo stated, “THAT doesn’t seem good.”

Met with the reveal that Klop’s tweet had been deleted, Saucedo further attempted to stoke the fires against Mignogna and Anime Matsuri by writing, “Aaand now the tweet’s gone. What the F–K is even happening.” 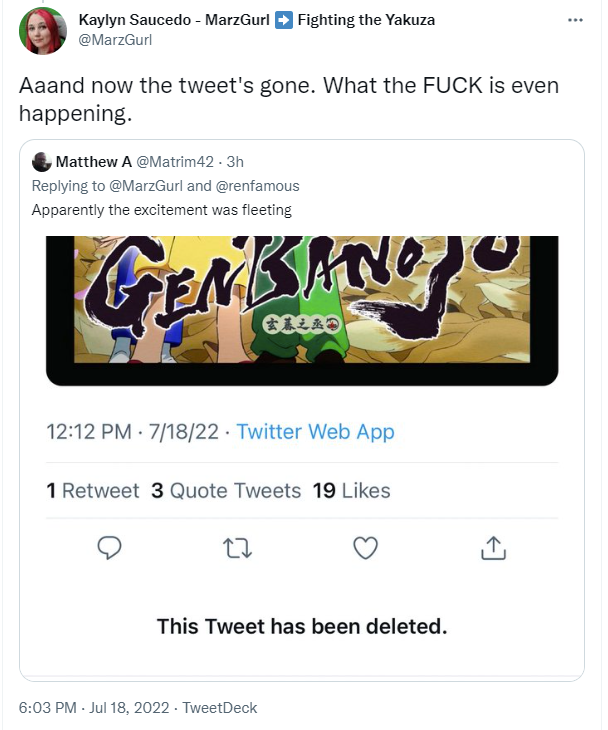 Retweeting a reply from Twitter user @Black_D_Gamer1 to @Renfamous’ above tweet, which saw the former state “As you can see right here, the copium is already strong with the amount of people, who fail to understand the voice acting industry isn’t going to be gatekept, by the left-wing clique, for much longer. I’ll expect the usual suspects to start sabotaging deals for Anime Matsuri”, Saucedo lamented, “See, it’s already become a right-versus-left dilemma.”

“It’s already a culture war for these dudes,” she proposed. “Rather than, ‘Uh, just these specific people are just kinda s—-y…?'” 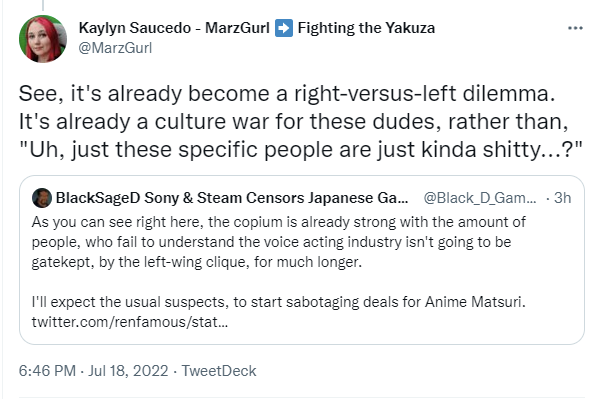 She continued her thread by dismissing, “I’m just looking at these two licenses, and it just looks like ‘The Most Okay-ish Anime’.”

“What’s the plan after the Anime Matsuri screenings?” she asked. “Distribution? I do think they’ll sell a stack to chuds who feel they have something to prove to the libs, but what about after them?” 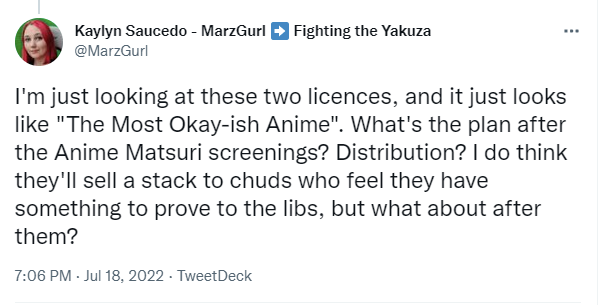 Saucedo then added, “Because this is the Internet you are right to take things you hear anonymously with a grain of salt. But a source tells me AT LEAST ONE of the voice actors in this project was led to believe another actor was opening a new studio and would be the ADR director. They were misled.” 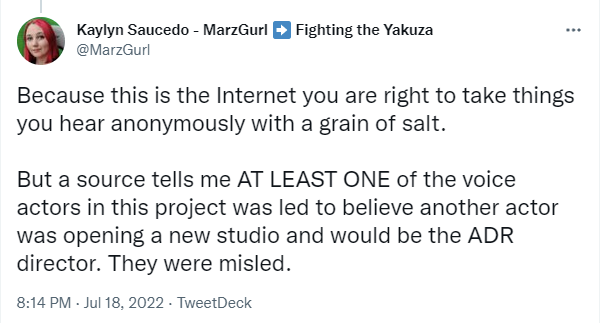 “I cannot speak for every single member of this cast,” she wrote. “But yes, in the case of AT LEAST ONE of them, Anime Matsuri pulled the wool over their eyes, in MULTIPLE layers. It was super deceptive and shitty. I would love to give more details, but I need to wait until I hear approval.”

“Long story short, as per usual, the REAL bad guys of this story are Anime Matsuri and literally anyone who has been associated with them in the past,” Saucedo cocnluded. “It’s crazy we keep having this conversation about them. Of COURSE it’s their fault.”

Saucedo’s tirade eventually gave way to an interesting exchange between herself and Rial, beginning when the latter replied to the thread’s opening tweet and exclaimed, “The list certainly makes blocking easier!”

“I’m pretty upset that I was mutual with some of these people,” wrote Saucedo to the voice actress.

“Same but I have no patience for anyone willing to associate with someone like that,” said Rial in turn. “Especially after they saw what me and Jamie went through. I went down the list and blocked. Healthy boundaries are necessary.”

Speaking of, late that same day, Marchi declared, “What a great day for a mass blocking spree!”

Interestingly, though vague, Berry also appeared to respond to the backlash.

Taking to her personal Twitter account, the voice actress detailed, “A lot can change from the time you record a project to the time it premieres. And sometimes we have no clue who we’re going to be working with at the time. We’re not given a full list of all the people involved. Freelance work is unpredictable”.

However, not everyone involved with the series was as ostensibly ashamed of being attached to the projects as Berry.

“Announcement!” tweeted the aforementioned Takanashi. “I’m super excited to share that I will be providing the voice of the protagonist Genbanojo in the English dub of… Genbanojo! There will be a premiere and Q&A at Anime Matsuri this July! This is my first anime protagonist role! AHHHHH!!” 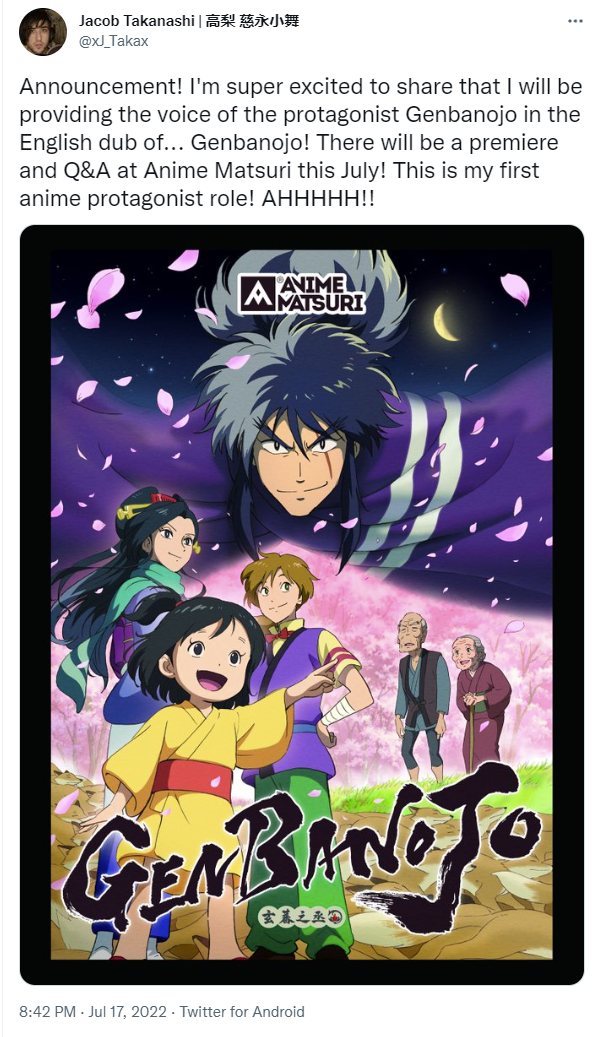 What are your thoughts on the reaction to Vic’s new venture with Anime Matsuri?  Let us know in the comments and social media.

NEXT: Release Date Confirmed For Second Season of Don’t Toy With Me, Miss Nagatoro