In the strongest suggestion thus far that the Disney Plus series is nothing more than a platform for its writers to use to work out their own personal hang-ups, She-Hulk: Attorney at Law appears to have modeled the uniform appearances of the series’ ‘incel’ antagonist group, Intelligencia, on the recognizable visage of popular YouTuber Doomcock. 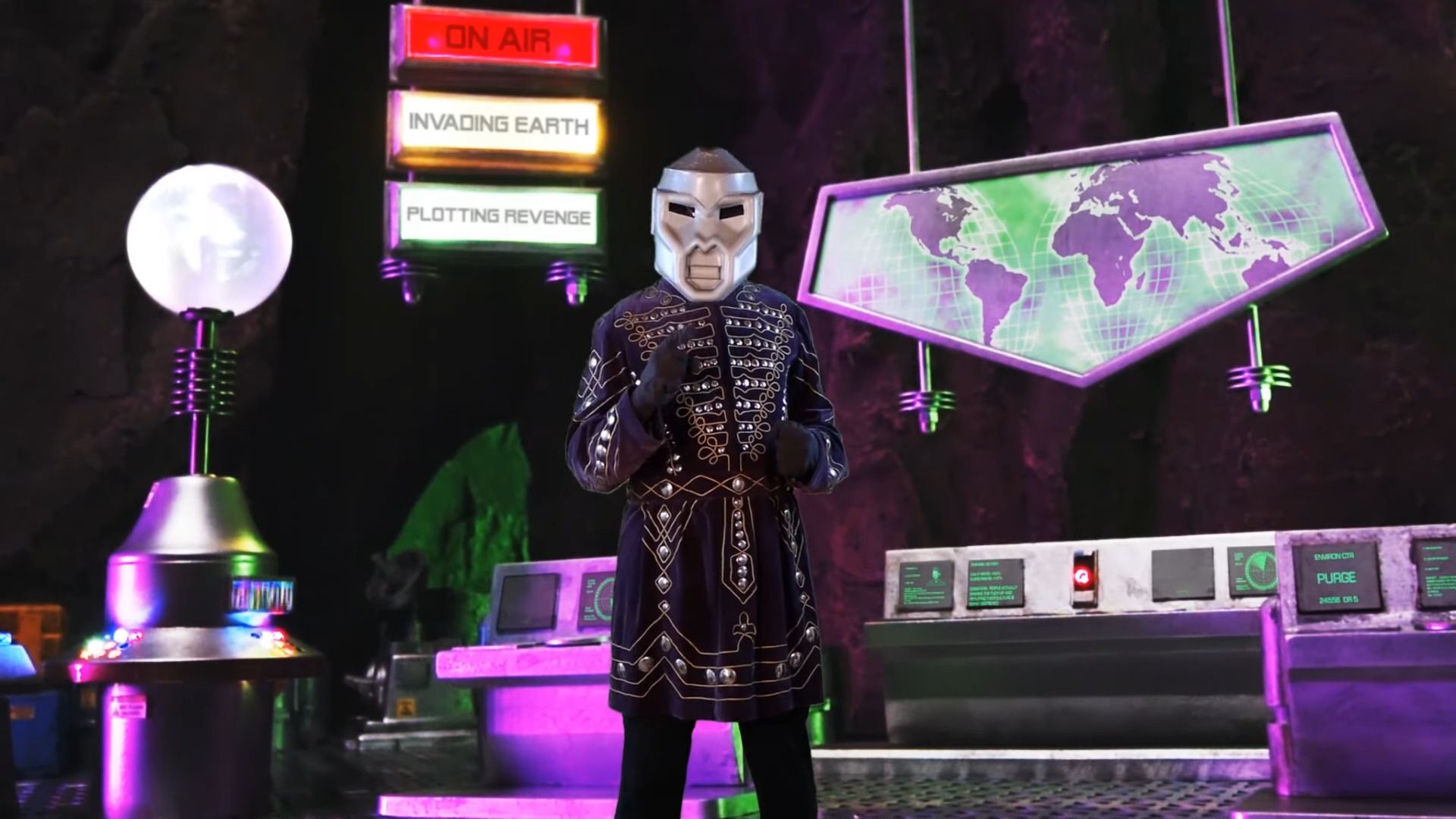 Introduced in the series’ sixth episode, Just Jen, the Marvel Cinematic Universe’s incarnation of the primarily-anti-Hulk super villain team is depicted as a forum exclusively full of angry men who have gathered in their shared hatred of She-Hulk. 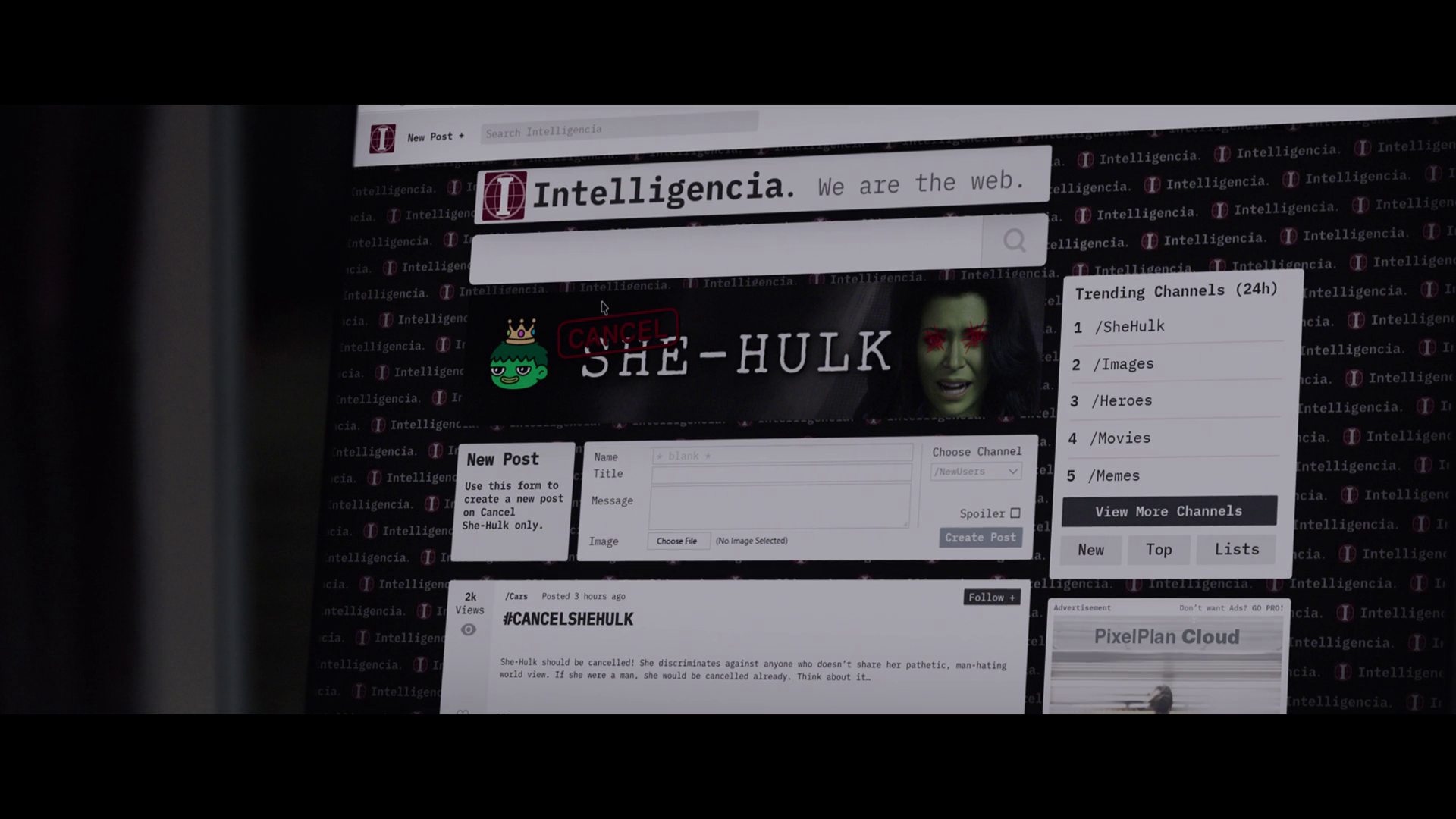 Shown making the worst quality ‘anti-She-Hulk’ memes possible – very much composed of the writers’ failed boomer attempts to parody contemporary memes using a format last popular in 2009 – and issuing death threats towards the Jade Giantess on a Reddit-like website, the Intelligencia’s hatred of Jen is shown as being based on nothing more than the fact that she’s a woman. 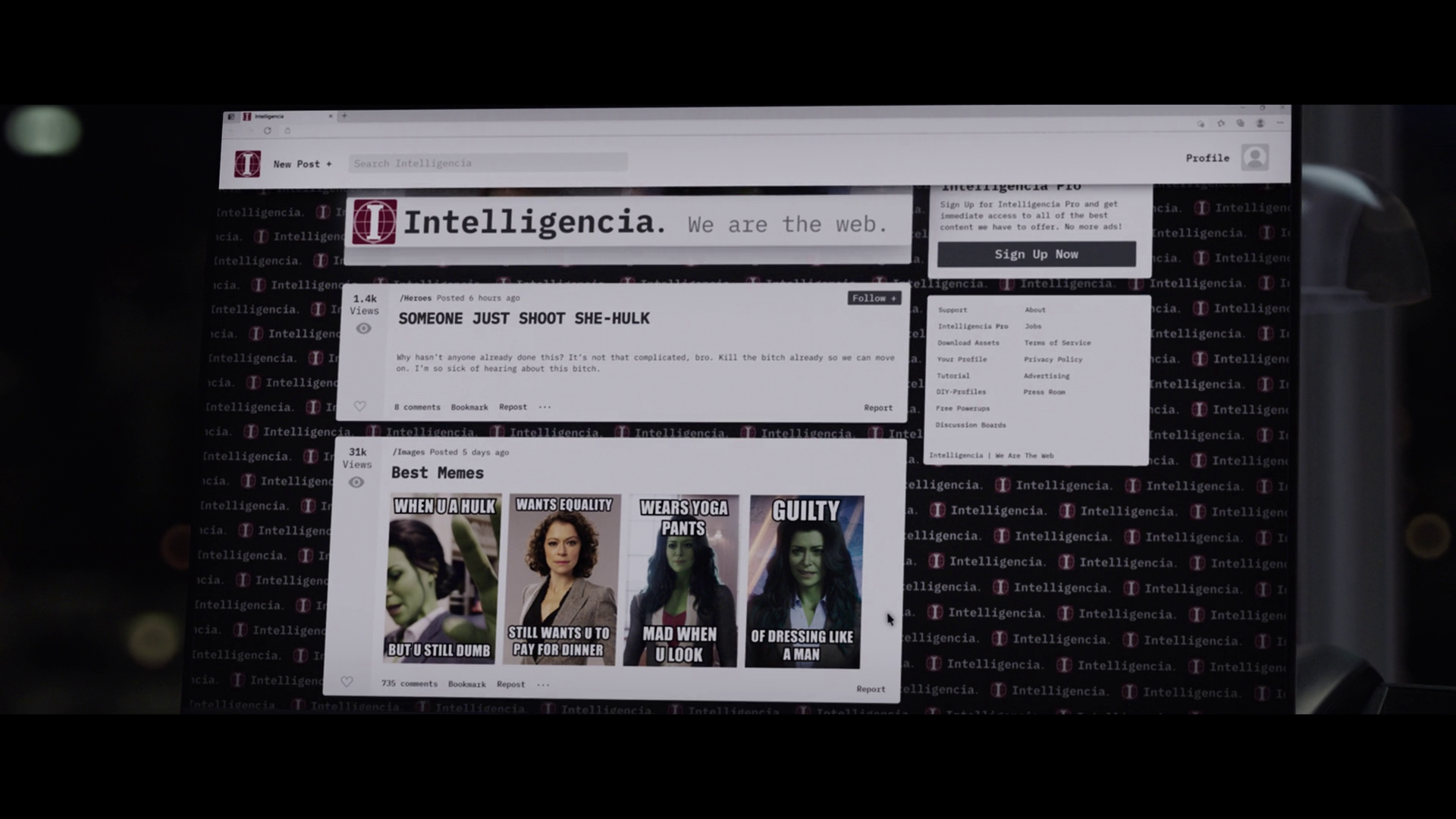 RELATED: ‘She-Hulk’ Star Jameela Jamil Says She Wants To “Engage With Critics So I Can Learn” Following Twitter Spats Over Series’ Quality

Though the group has been for the most part kept to the shadows, outside of their agent Josh being seen manipulating She-Hulk’s heartstrings as part of the group’s machinations, the Intelligencia finally made their ‘debut’ alongside Daredevil in the series’ latest entry, Ribbit and Rip It.

Following what is essentially an entire episode surrounding the Devil of Hell’s Kitchen, the series’ latest episode draws to an awkwardly-stumbling close with Jen’s attendance of the awards gala where she has been nominated as Female Lawyer of the Year – though this disappointingly turns out to be an admittedly patronizing ‘participation trophy’ award rather than a genuine accolade. 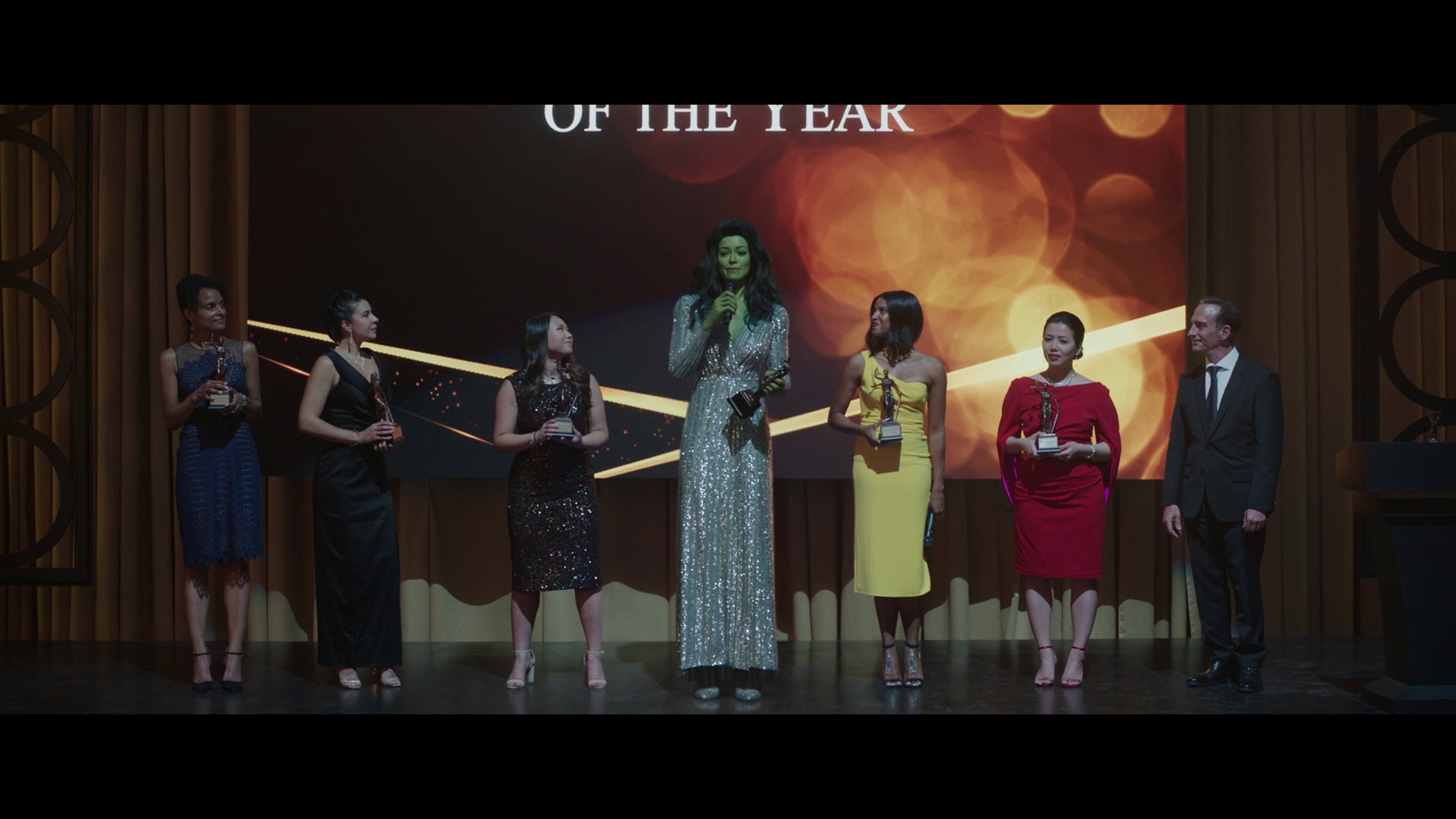 Eventually invited up to the stage along with her fellow ‘Female Lawyers of the Year’, Jen takes the opportunity regardless to deliver a customary acceptance speech, thanking her parents, her friends, and her co-workers for their support throughout the ups-and-downs of her career.

However, it is mid-way through Jen’s speech that the Intelligencia reveal themselves to the public at large. 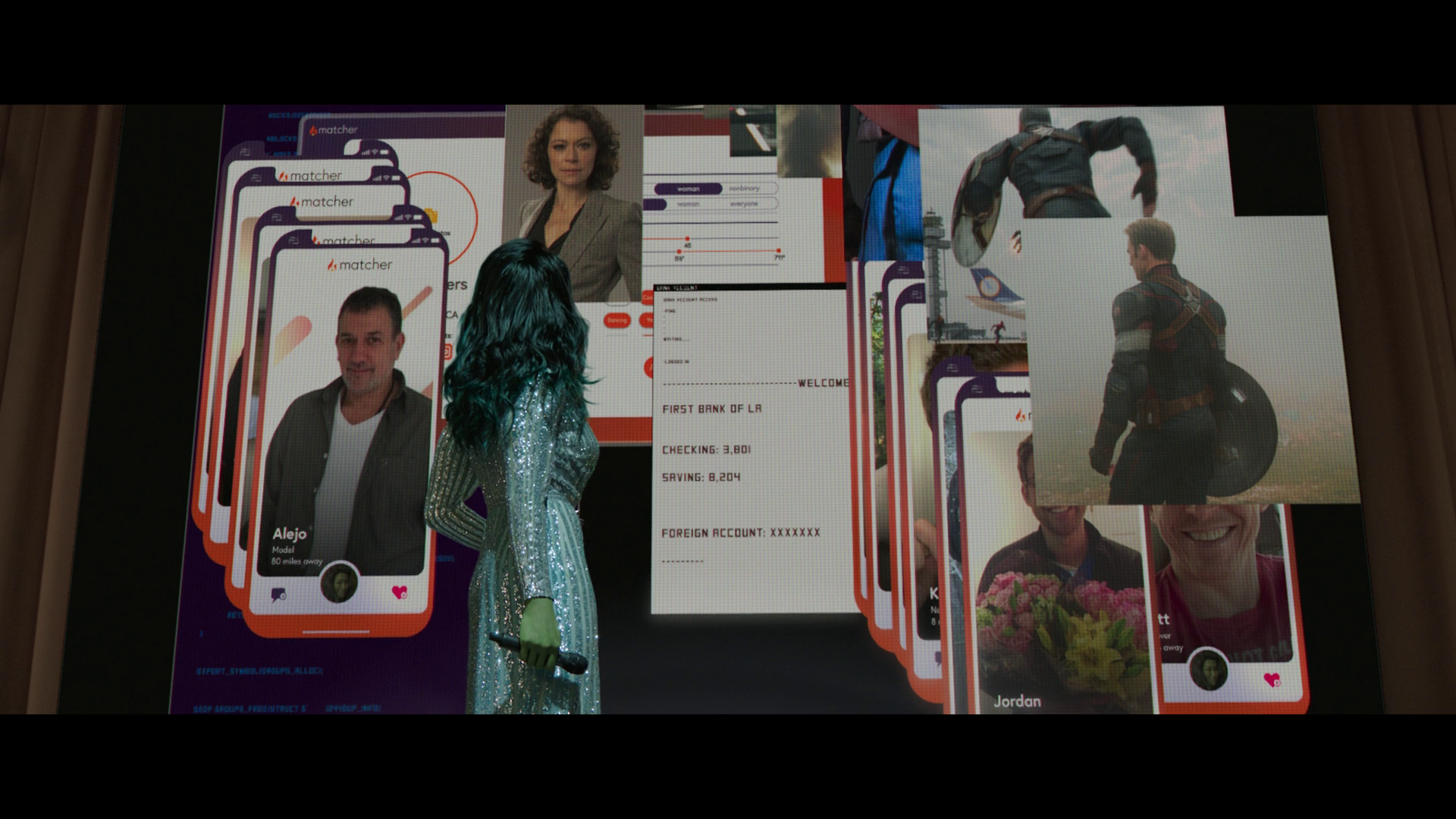 RELATED: ‘She-Hulk: Attorney at Law’ Episode 7 Review – Jennifer Gets Ghosted By A Manbaby, Goes To Therapy

“Do you want to know who She-Hulk really is?” asks the group’s voice masked leader, Hulk_King, as the group hijacks the award ceremony’s audio visual set-up.

“This is the truth, as presented by Intelligencia” a voice booms out across the reception hall as two masked men appear on screen. 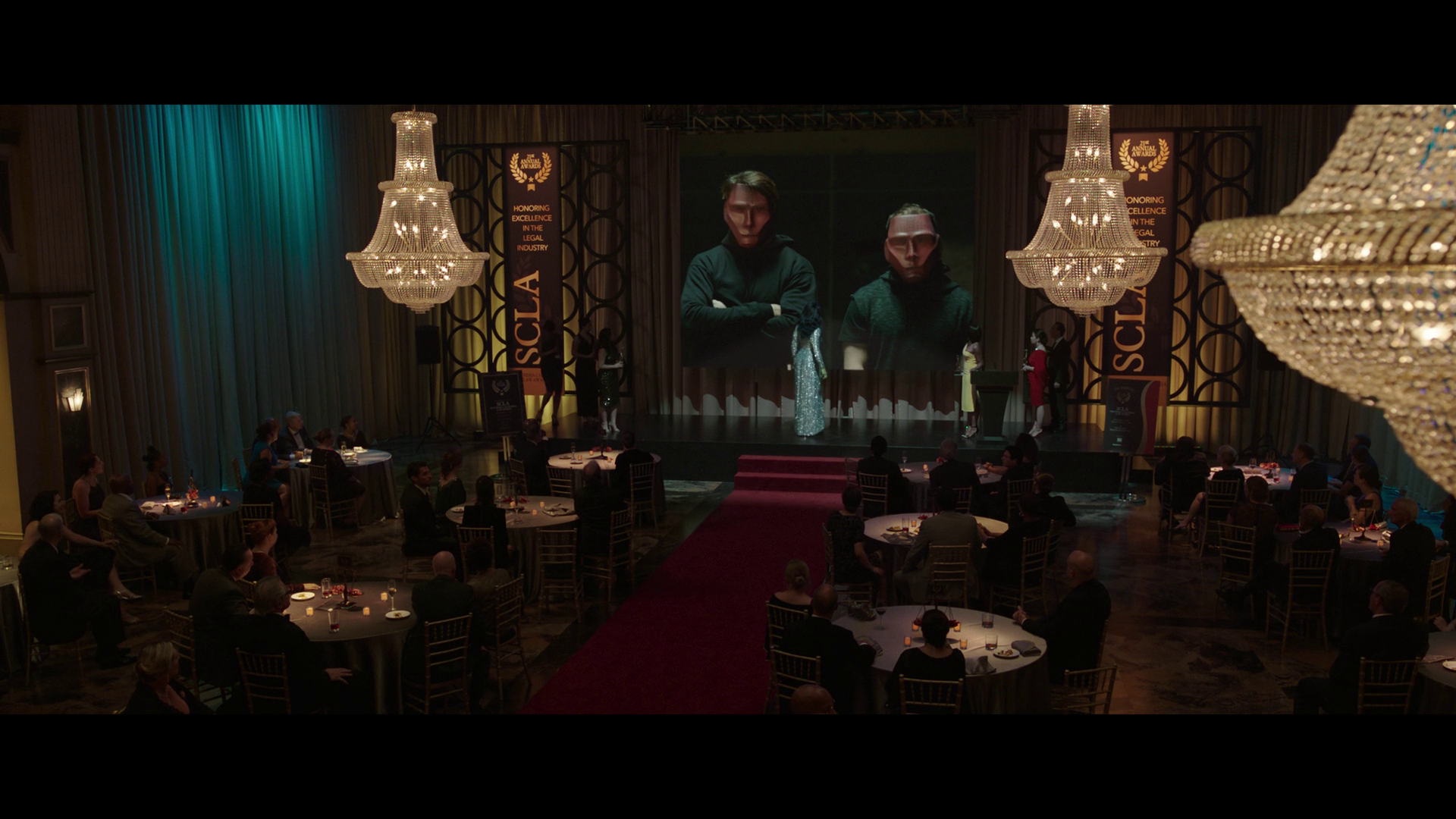 “And she’s a slut!” he finally exclaims as the group’s main ‘weapon’ is deployed – a sex tape, recorded without Jen’s permission by the aforementioned Josh. 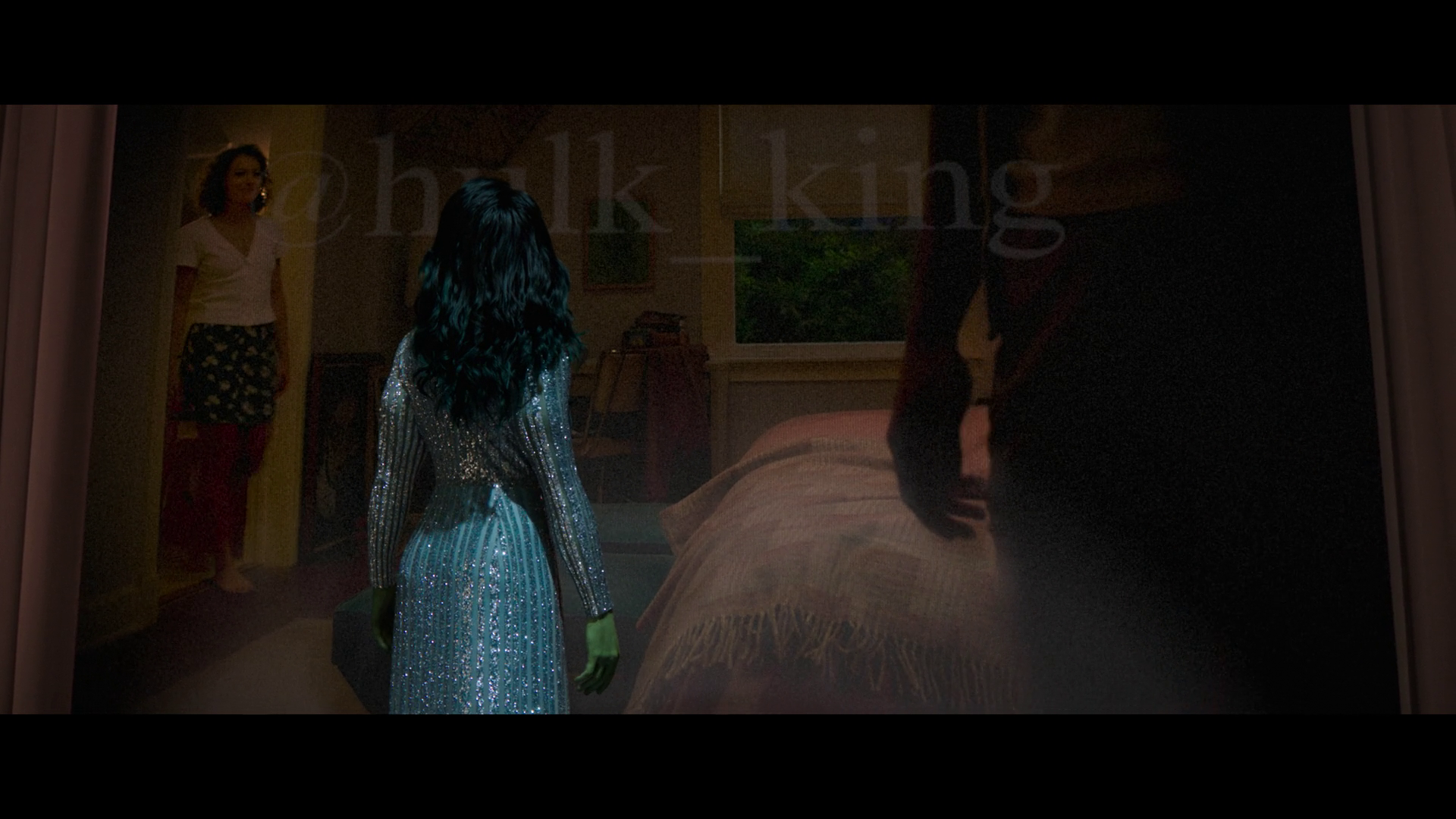 Staring up at the screen in horror as her personal escapade is broadcast in front of those closest to her both personally and professionally  – including her parents – Jen proceeds to ‘smash’ the hall’s giant television monitor, in turn causing those in attendance to flee in terror and panic.

However, just then, She-Hulk realizes that she is being recorded by one of her sleazy Tinder dates, Todd Phelps, in service of providing the Intelligencia with more negative material related to her super-powered alter-ego. 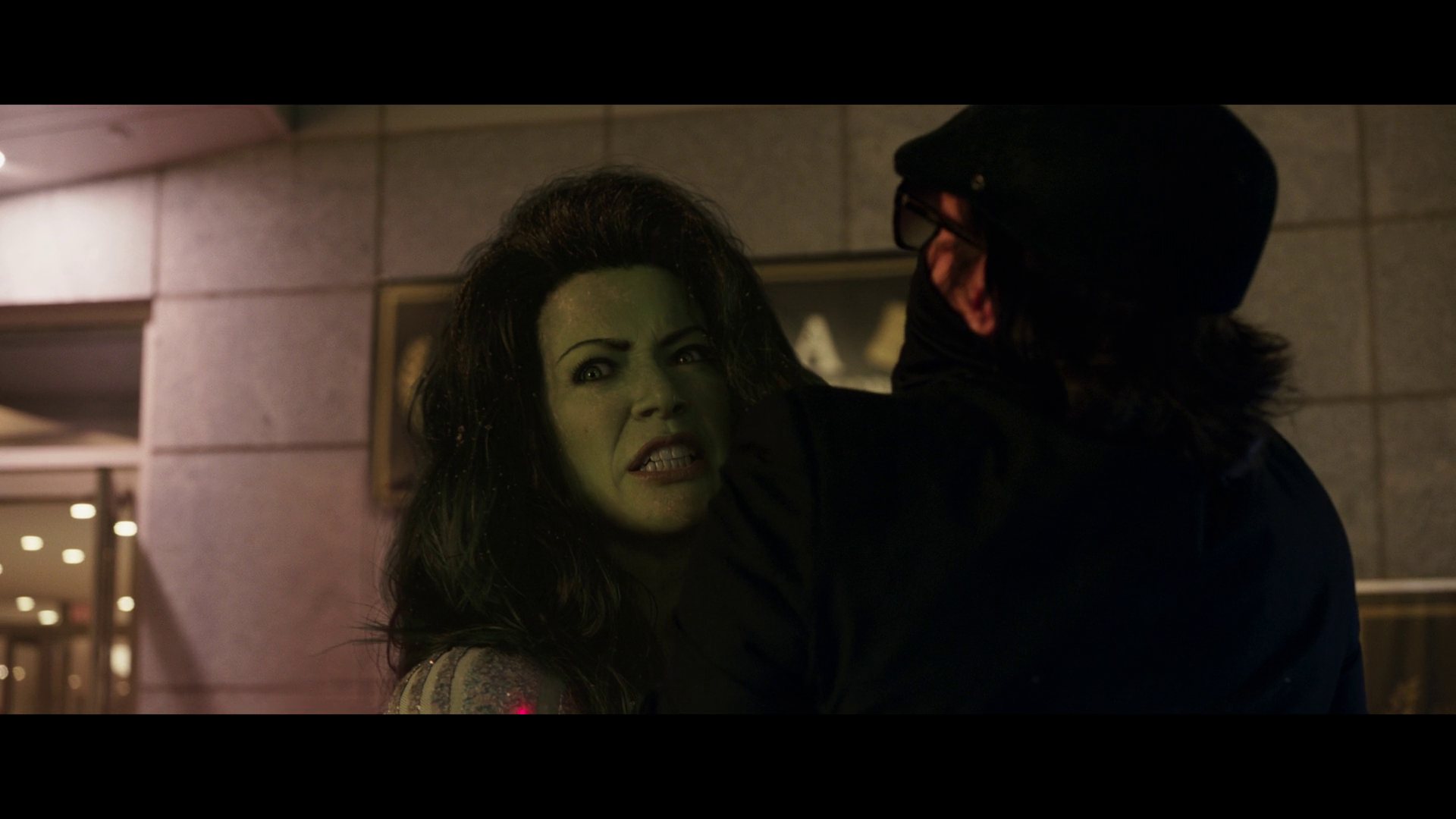 Losing herself to her emotions, Jen flies into a rage and proceeds to chase Todd out of the building, all the while smashing to bits anything that stands in between them.

Ultimately, the episode draws to an end with Jen, lifting Todd up from the ground by his collar and surrounded by anti-Hulk security, realizing that her outburst has played directly into the Intelligencia’s plans. 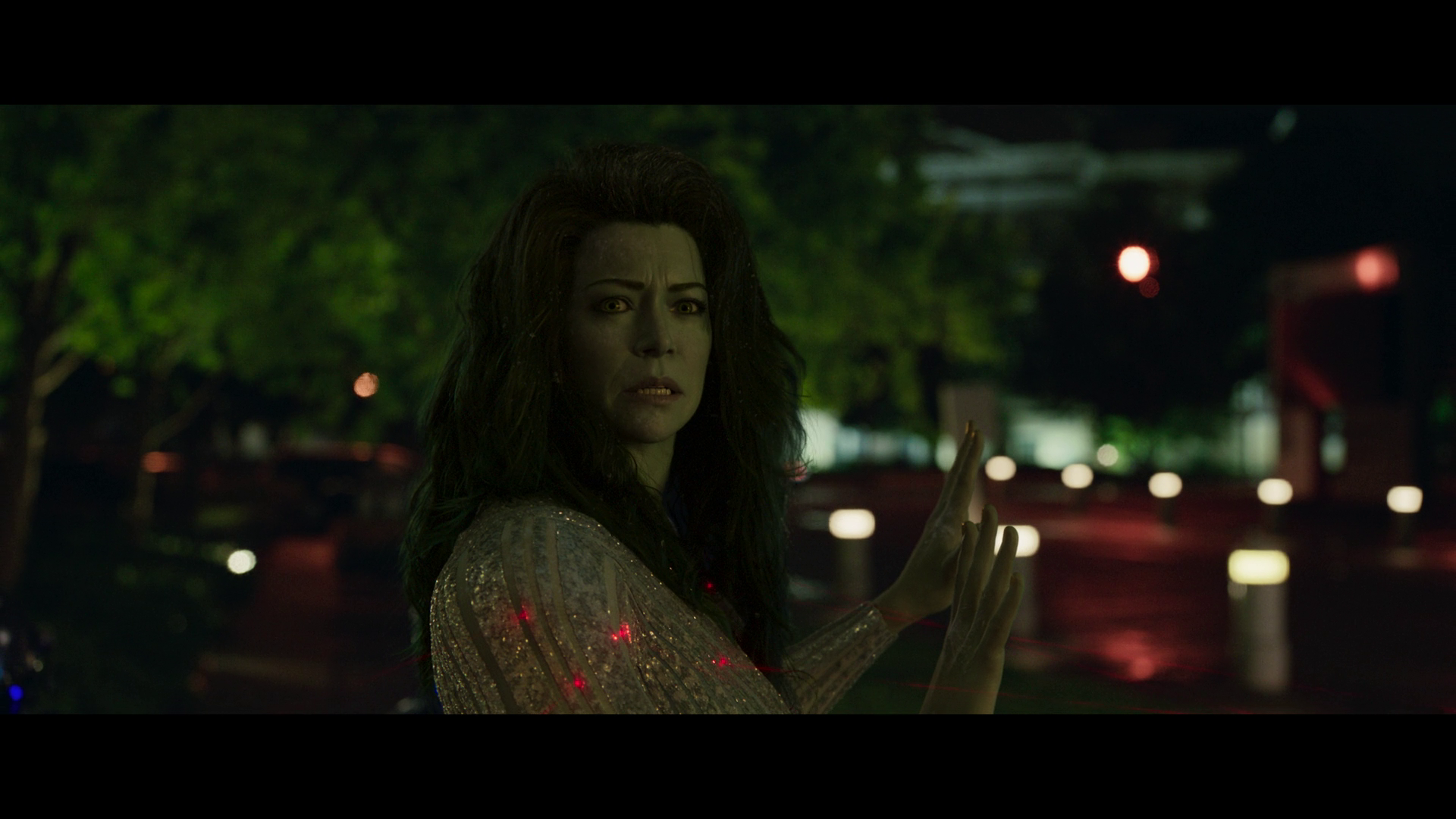 Clad in robot-like angular masks that emphasize the general bone structure of a human face and speaking through a voice modifier that drops their pitch by a few octaves, it appears that either these angry strawmen had their disguises inspired by the notable YouTuber or Marvel and Doomcock have found themselves involved in one  of the most insane coincidences in the history of media production.

In fact, these similarities were so widely perceived that the entire situation was quickly raised to Doomcock himself, who in turn responded via his own channel.

“Essentially, if this is intended to be a shot at me – and I think there’s a pretty good chance this is the case – it’s a fake take on Doomcock and that’s what I find offensive,” asserted the metal masked man.

“In simply speaking out and doing my best to defend the literature and myths of the recent past, Doomcock has become a target for those in Hollywood,”he further explained. 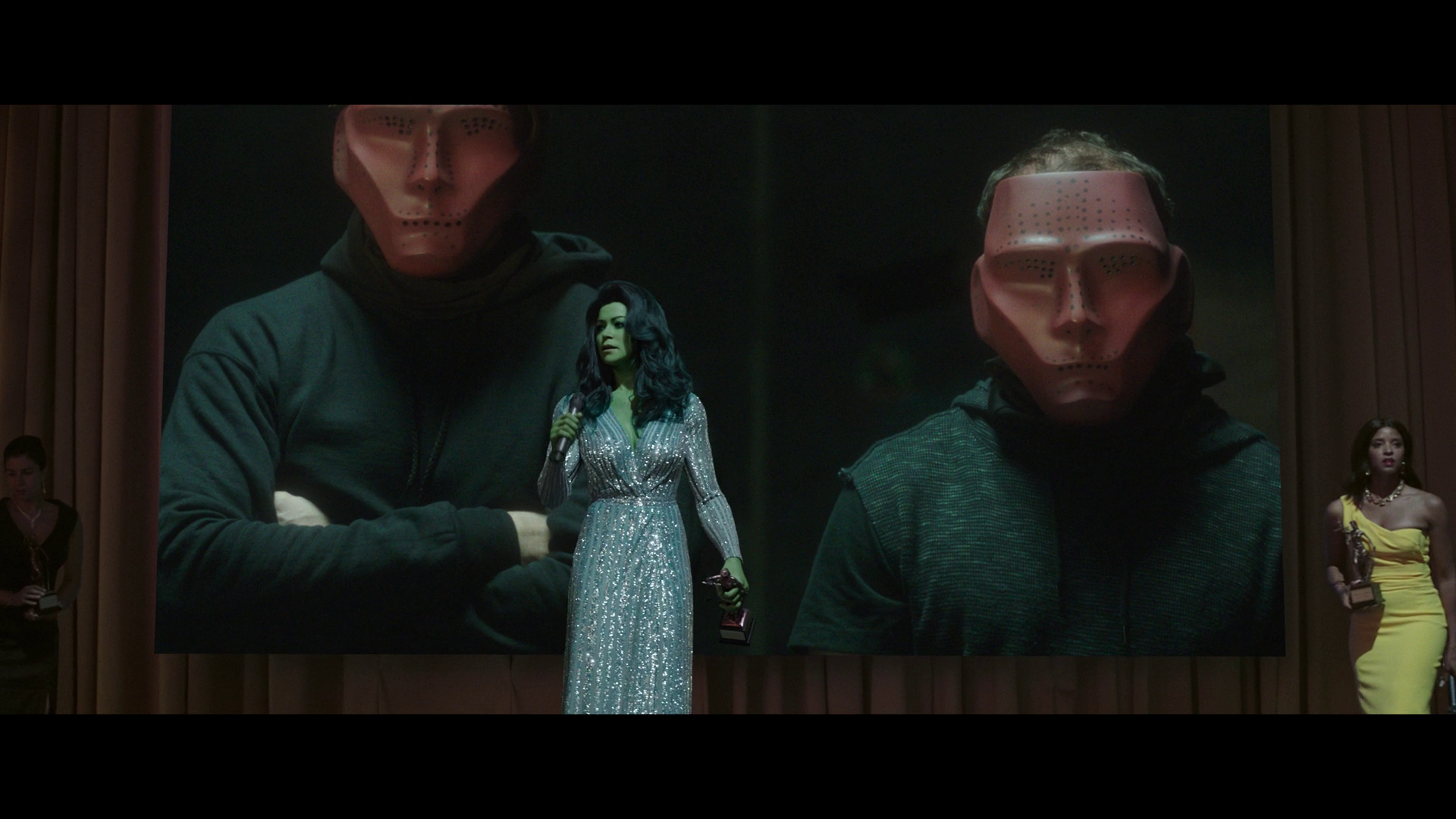 Yet, rather than find his targeting disparaging, Doomcock offered a surprisng counter of optimsm.

“And this means one thing, my friends: we are winning,” he concluded. “If Doomcock bothers them this much, it means we finally have their attention.” 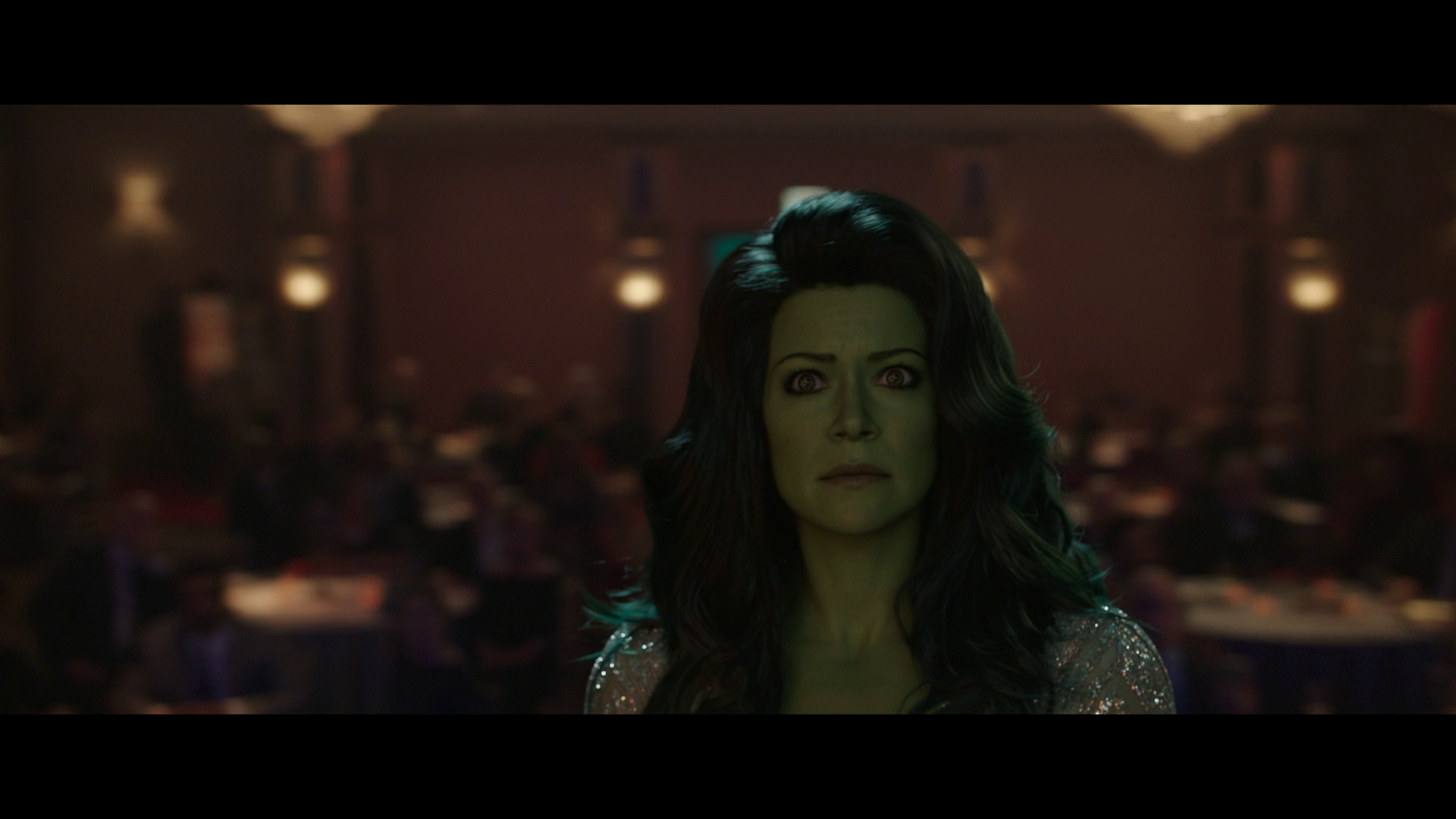