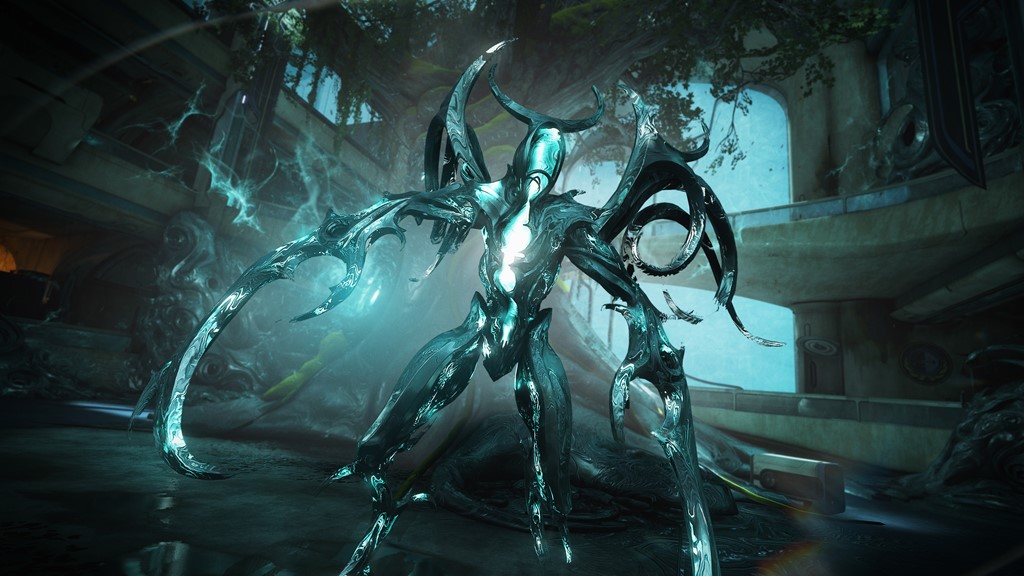 Del Arroz opened, “they won’t even leave your video games alone at this point, but they never would. These corporations have been pushing this crazy agenda on everybody in entertainment, at your work, you can’t get away from it, and it’s intentional. They want to just program your minds, so that you will accept all the weird LGBT-fetish-whatever as something that’s like a full-time occupation.”

Del Arroz claimed someone had been banned from the game “because the Warframe developers, I guess, want to promote weird grooming stuff.” To drive his point home, he shows user Ninja_Ras_Frog’s support ticket on the official Warframe support website.

Therein, Ninja_Ras_Frog didn’t understand why he had been suspended, decrying, “Um, played this game for years now. Many people I have helped and constantly helping others… I get a sudden account ban when trying to log in?… What did I do wrong? No notification or warning about what was done? How can I rectify this situation? A lot of my time and I’ve put money into this community. Please.” 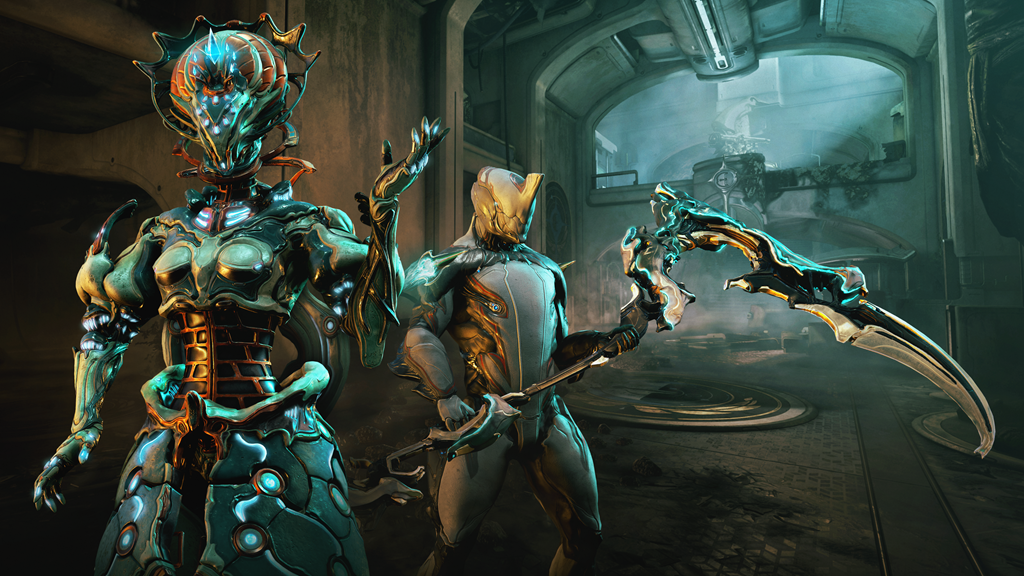 Moderator [DE]Paolo replied that “After an investigation,” it was determined Ninja_Ras_Frog had violated the game’s Terms of Service and End User License Agreement. “Warframe has a zero tolerance policy towards the propagation or endorsement of hate speech; use of these terms have led to the permanent ban of your Warframe Account.

The offending text, presumably from the game’s chat log was as follows: 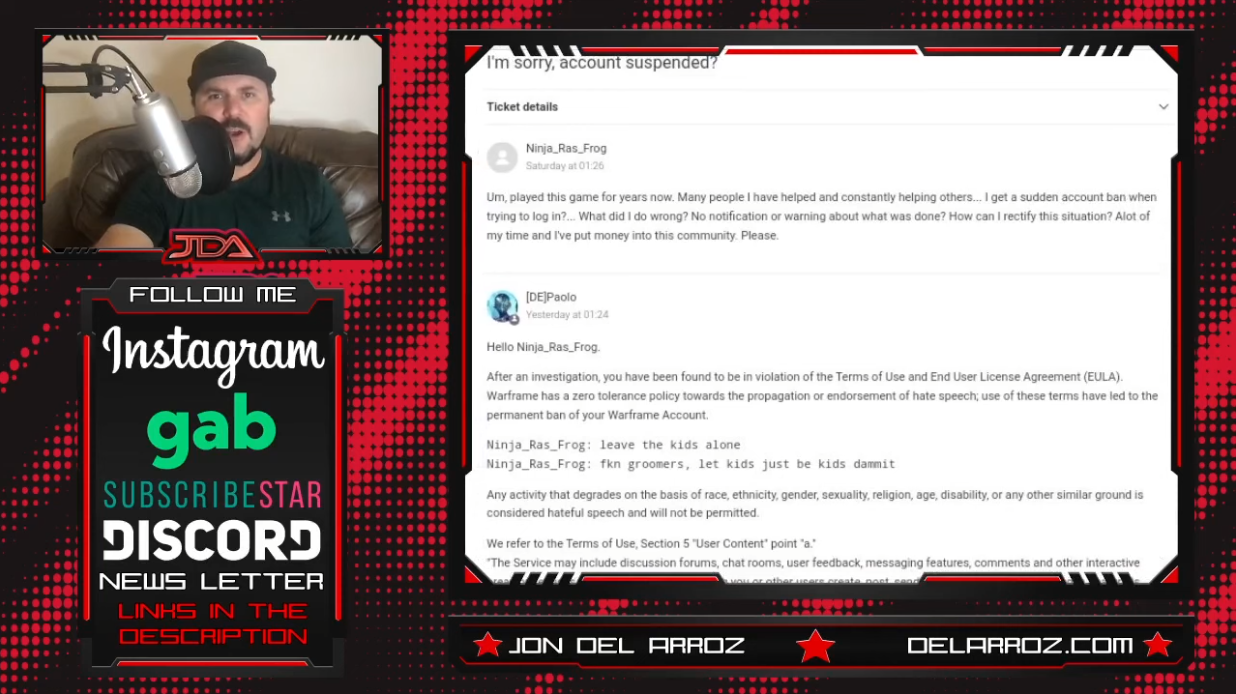 “Any activity that degrades on the basis of race, ethnicity, gender, sexuality, religion, age, disability, or any similar grounds is considered hateful speech and will not be permitted,” the moderator dictated.

Ninja_Ras_Frog insisted, “This was taken out of context to try and paint me as anti LGBTQ and was made in response to chat about doing adult fetish activities in front of, and the sexualization of children. It was a statement made not towards any specific person either.”

“Are pedophiles protected under those rules?” the banned user inquired. “Is merely using a word in it’s proper definition hate speech? A permanent ban also seems excessive considering I’ve never even been chat banned before in the over 3 years I’ve been playing. I’ve always been welcoming in my playtime to all types of people and players.” 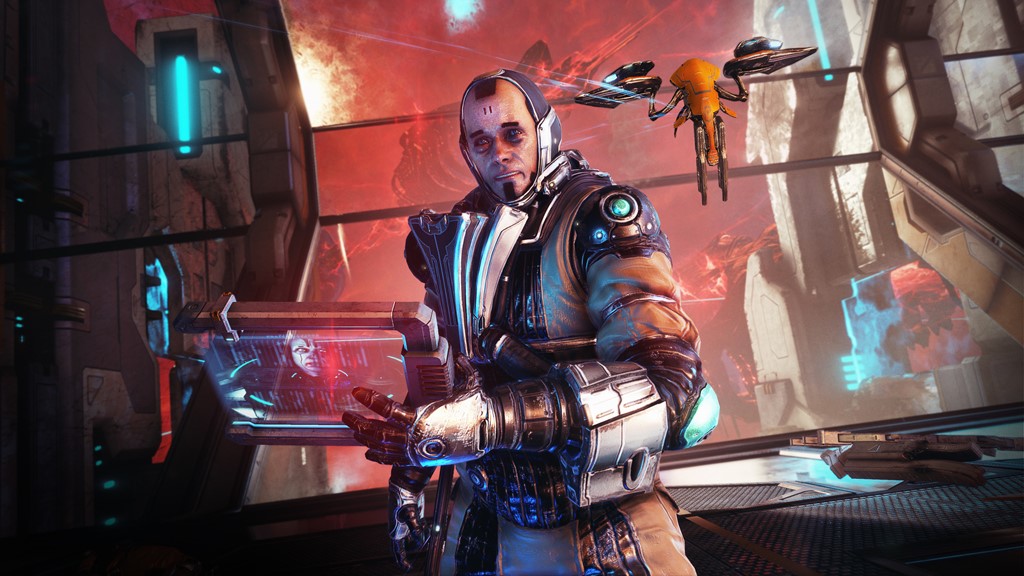 “Thank you for replying back! We truly do appreciate you desire to continue playing,” the Warframe moderator prefaced. “However, as was mentioned previously, your account was suspended for the propagation or endorsement of hate speech in-game which is a clear violation of the Terms of Use/EULA and Code of Conduct.”

The moderator reiterated Digital Extreme’s zero-tolerance policy regarding hate speech. “We’re very sorry but your account will remain permanently suspended and we will not be able to assist you further in this regard.” 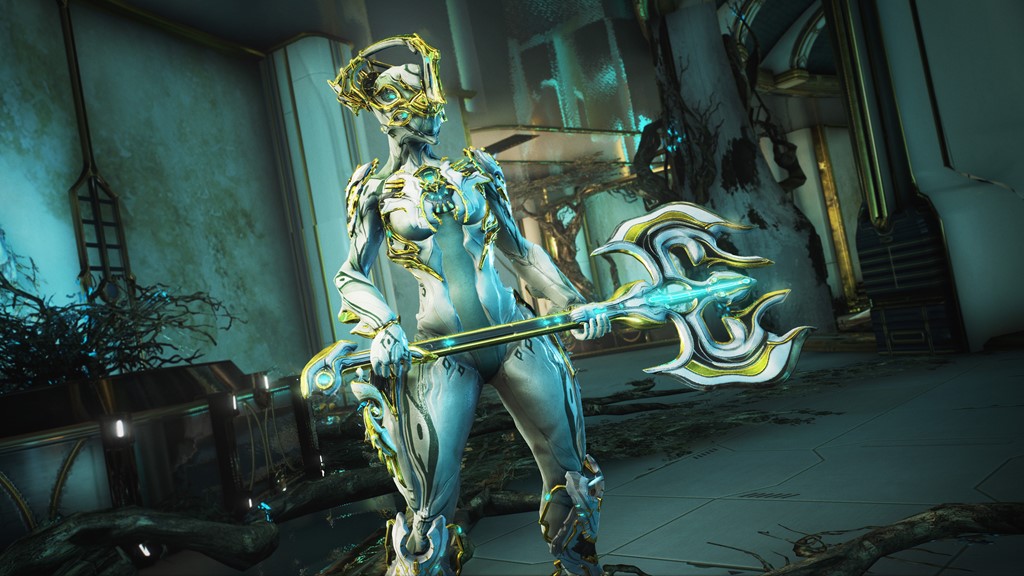 It appears the moderator, and those who reported Ninja_Ras_Frog, felt the “groomer” comment targeted the trans and LGBT community. In recent months, the term has been used by some who are critical of allegedly explicit books discussing LGBT matters being available in schools, as well as transgender strip-teases and parties allegedly aimed at children.

While the use of the term “groomer” is meant to evoke overtly encouraging children to have an interest in a subject they wouldn’t otherwise care about, it evoking sexual grooming of a minor seems to be intentional. It is, however, unknown if the other users were banned for their comments. 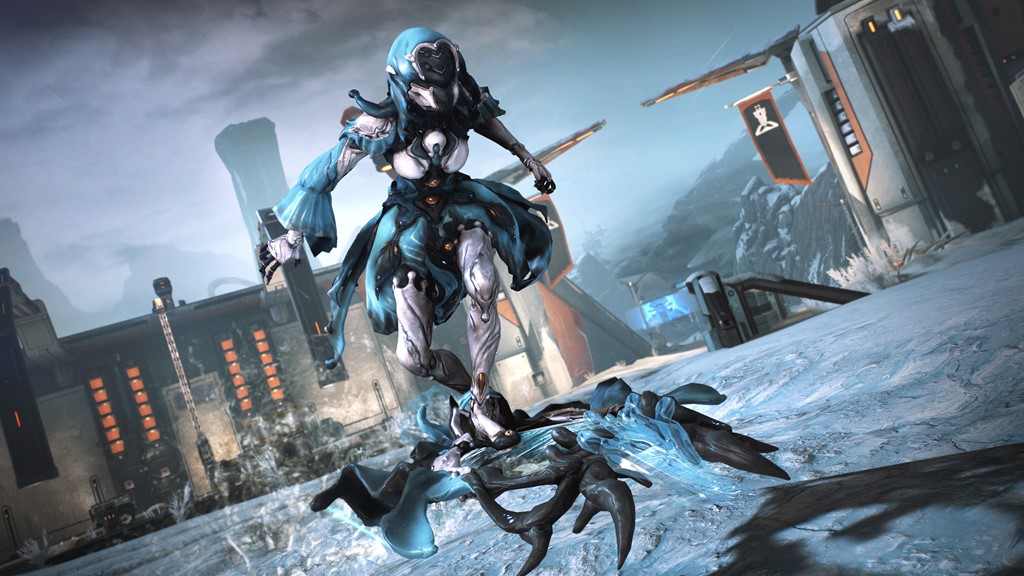 Along with Del Arroz accusing that Warframe developer Digital Extremes had acted with “disregard” and outright hatred for their players, once they identified Ninja_Ras_Frog as a “political opponent,” he felt the ban was unwarranted.

“So if you’re talking out against people putting sexual content in front of children, that’s hate speech. Are you waking up to how far these people are going at this juncture?” Del Arroz pleaded.

He went on, “Now, Warframe has a zero tolerance policy for people speaking out against that, which means they want you to accept people talking dirty, sexual content in front of your children. That’s what they’re trying to push at this point.”

“They have zero tolerance if you’re not just totally fine with that. That’s f—king crazy,” Del Arroz despaired. 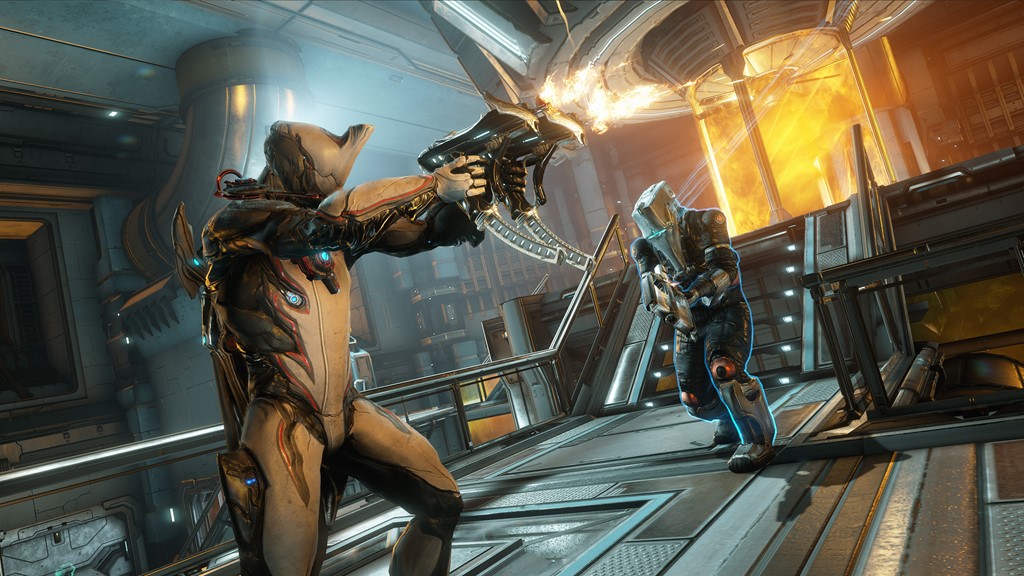 Del Arroz also highlights how in the terms [DE]Paolo quoted (Section 5 “User Content” point “a”) players agree not to share certain user content, including that deemed “obscene, pornographic, indecent, lewd,” and “suggestive.” This was despite the conversation prior to Ninja_Ras_Frog’s posts being “Nasty sexual contents, and there are kids present, and that’s exactly what’s going on.”

“That’s OK apparently, there’s no zero tolerance on that. Those people are there, they’re not banned.” He continued to mock the moderator’s patronizing tone, alleged defending of pedophilia, and refusal to review the case. 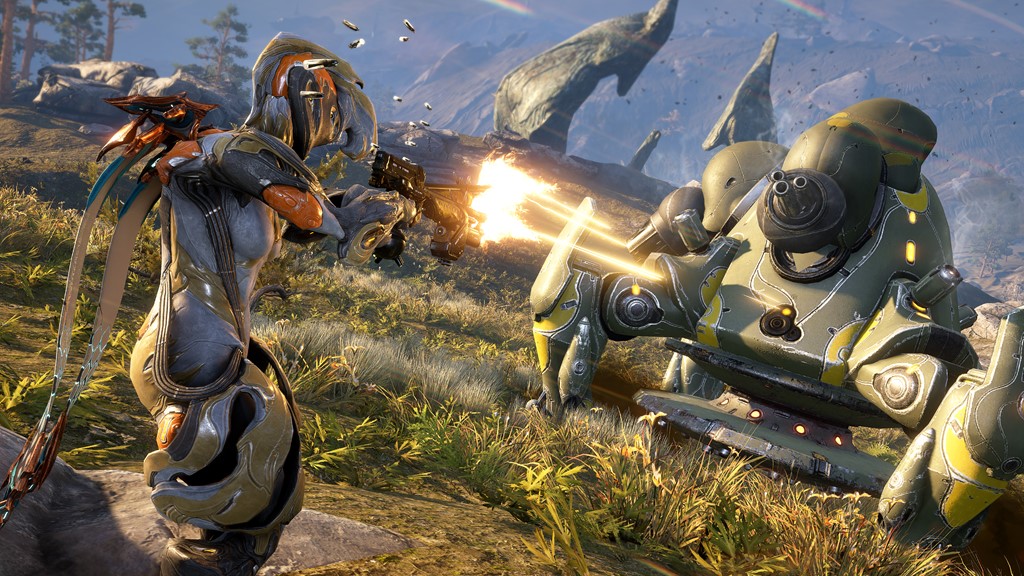 “This is exactly what happens in a non-Christian society,” Del Arroz asserted. “When you have no possible way, no possible path towards being able to do what you want, no possible path towards just being a part of any community, because you don’t agree with their weird, sexual politics, is what it comes down to at the end of the day. That’s more important than anything else to these people. Every single time.”

“Their game, their community, keeping their profits — all of that is thrown out the window ‘cuz creepy sexual politics are what’s important. It’s so freaking weird.” He continued to argue this came about due to Christianity being “removed from society,” and their values such as sexual purity is where freedom “starts,” along with redemption. The lack of the latter being what the moderators and other LGBT advocates allegedly showed. 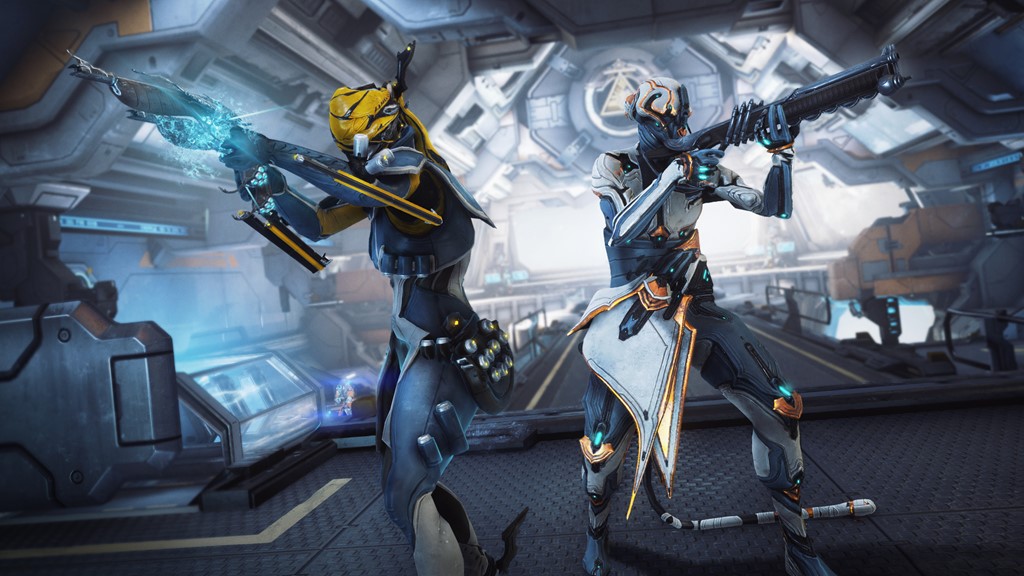 Del Arroz finally showed screenshots of the alleged context of Ninja_Ras_Frog’s messages, though the first image had half the text cut off, and the user’s comment about leaving children alone is not present. Rebuilt based on Del Arroz’s own commentary, the alleged messages read as follows: 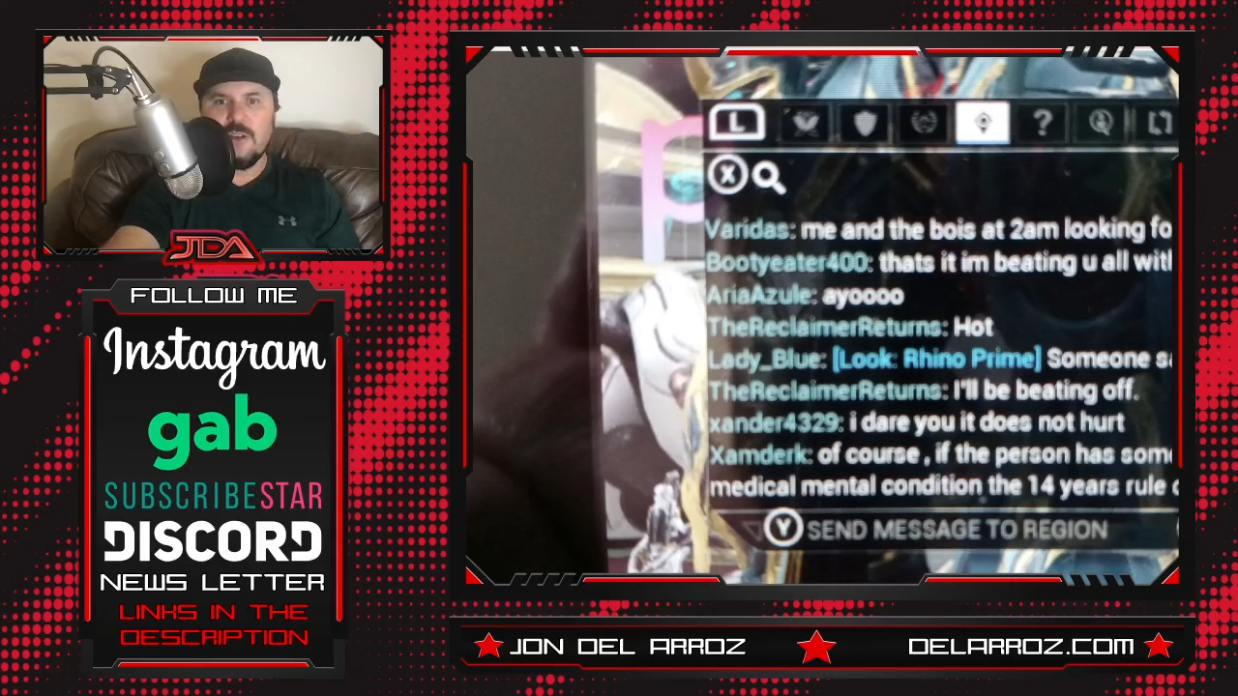 TheReclaimerReturns: I wasn’t jacking off in public I swear! There was a squirrel in my pants!
MGR_Raiden: I got a cell with Buffalo Bill
Divulge: Cuhhh
AriaAzule: lolsoup
HenryNada2: But as always on Latin American countries, outdated marriage laws let you get away with it-
Ninja_Ras_Frog: straight to jail, right away. right to jail
Varidas: soup 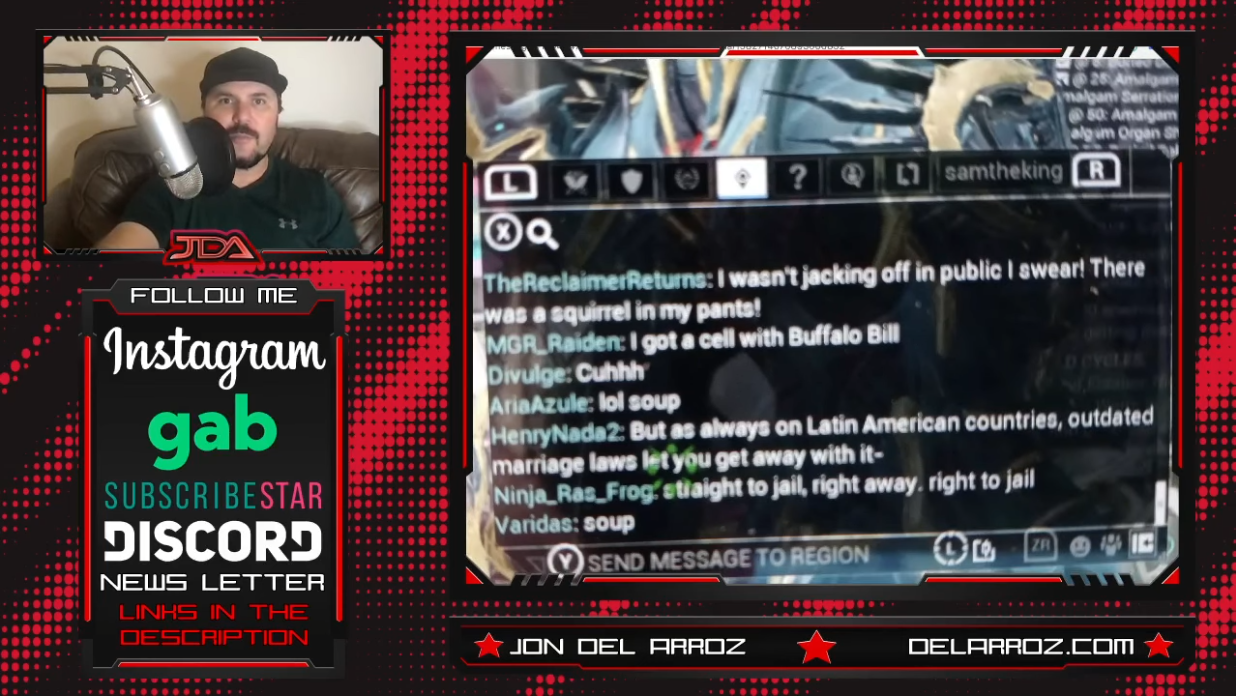 MGR_Raiden: I’d say you all need god, but god’s hella dead.
Xamderk: im a d—k but not so much like before:
TheReclaimerReturns: *a—burger*
HenryNada2: All this “I’m the authority, maximum influence” thing is a joke btw? but some of y’all take it way too seriously.
Lady_Blue: cult cult cult
Space-idiot: Anyone using Profanity tonight is getting a report idc
Demogorgons1: hello
Bayhaelan: gg 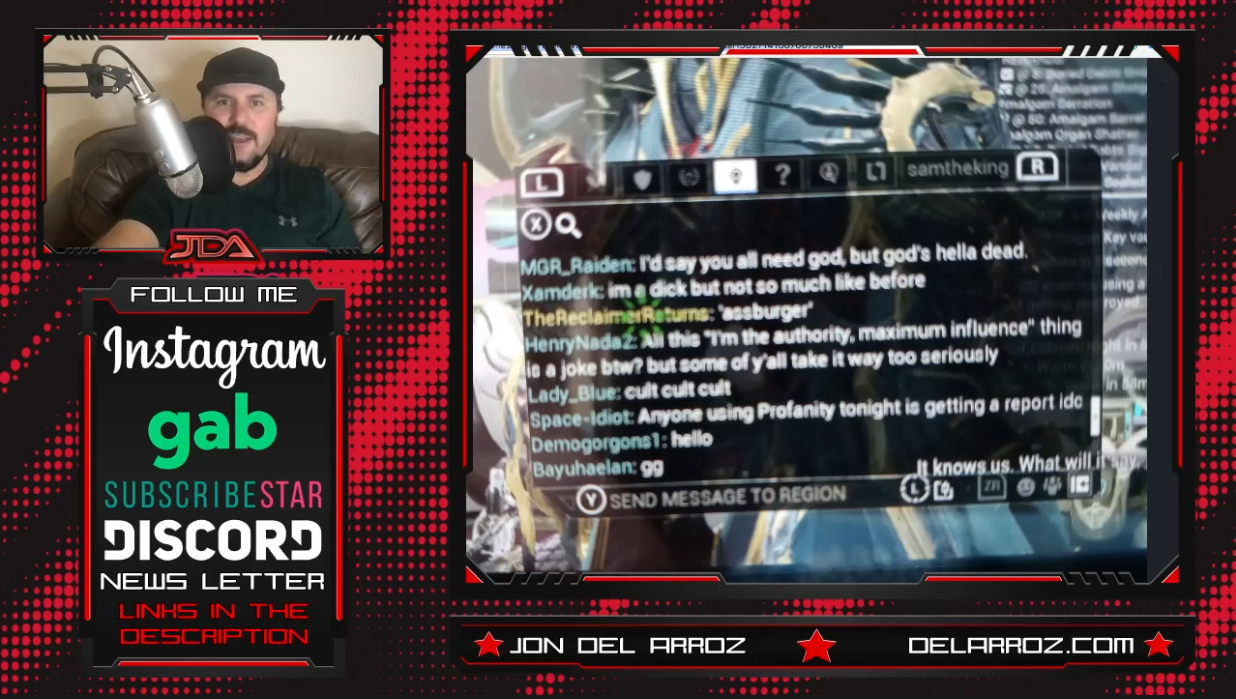 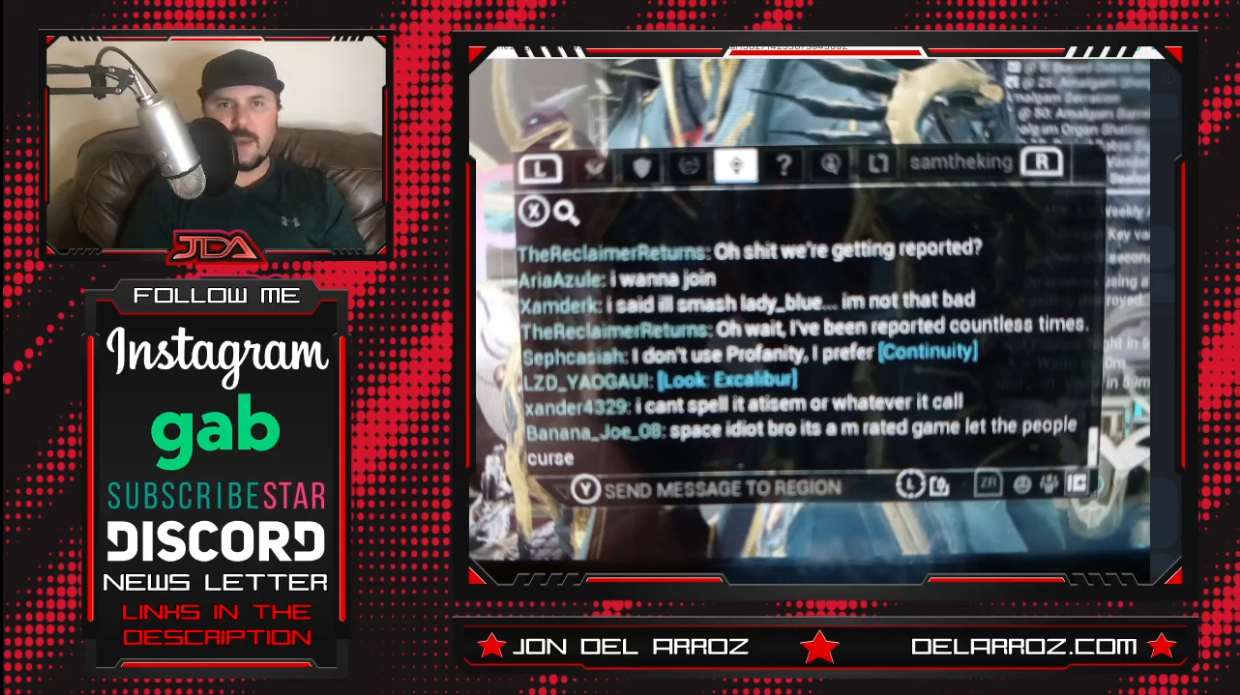 As Banana Joe highlights, Warframe is rated M for Mature by the ESRB, and 18 by PEGI. Yet, the game’s terms stipulate vulgar language is to be avoided. “So all these people are talking lewd, they’re being profane, which is ‘in clear violation of the terms of use and code of conduct’, as they say: ‘totally good to go!'” Del Arroz mocked.

“This guy’s like ‘hey, let’s not do weird sexual fetish things because there’s gonna be children present, we’re not OK with that, that’s what we don’t want in our society’, he gets the ban hammer for being the rational adult in the room, who’s not a sicko! And that is really tragic,” he concluded.

NEXT: ‘She-Hulk’ Director Kat Coiro Says Production Team Wanted To Make The Series “About A Woman Navigating Sex But Also Something That Everybody Can Enjoy, Including Children”