Black Panther: Wakanda Forever is not only attempting to change how Namor’s name is pronounced and how he receives his name, but it also appears the film might be changing what his name means entirely.

In a recently released clip for the upcoming film, the character that Marvel Studios is marketing as Namor tells Letitia Wright’s Shuri, “My enemies call me Namor.” Actor Tenoch Huerta pronounces the word, “Nah-more” instead of how it is traditionally pronounced as “Neigh-more.”

Producer Nate Moore explained the decision to change the character’s pronunciation in an interview with Phase Zero.

He noted, “Namor, I would say, he’s obviously given that name also by someone in the film so it’s not even something that it is from him. But there is certainly a way that a Spanish speaker or even a Mayan speaker would say Namor versus a way that an English speaker or somebody who is a little bit more Western in slant might say Namor. And we thought that was just interesting.”

“It’s reality that people face and it felt more genuine than having everybody to pronounce it correctly, to be quite honest,” Moore elaborated.

Moore’s explanation along with the clip also reveals the film is changing how Namor receives his name. Instead of receiving his name from his mother, Princess Fen, when he is born, he’s now receiving the name from his enemies. 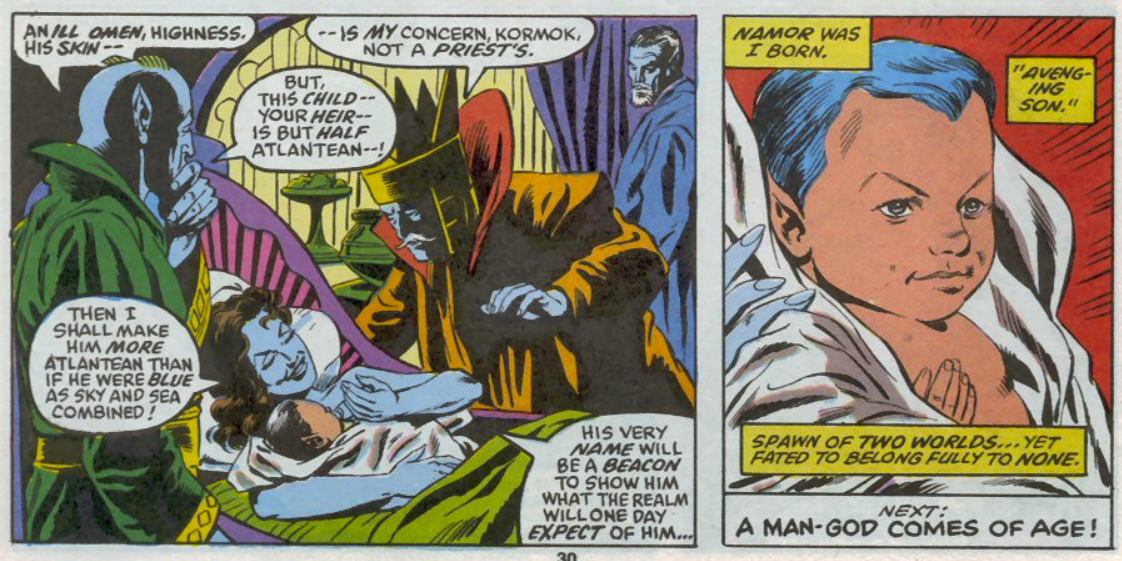 The Saga of the Sub-Mariner #1, Marvel Comics

As detailed in the panels above, his name means “Avenging Son.” This is not a new meaning. It arrived when the character was first introduced to comic book readers back in Marvel Comics #1 in 1939.

As you can see below, the panel reads, “And so Namor, the Avenging Son, faces the surface men of the world, in what promises to be mortal combat!” 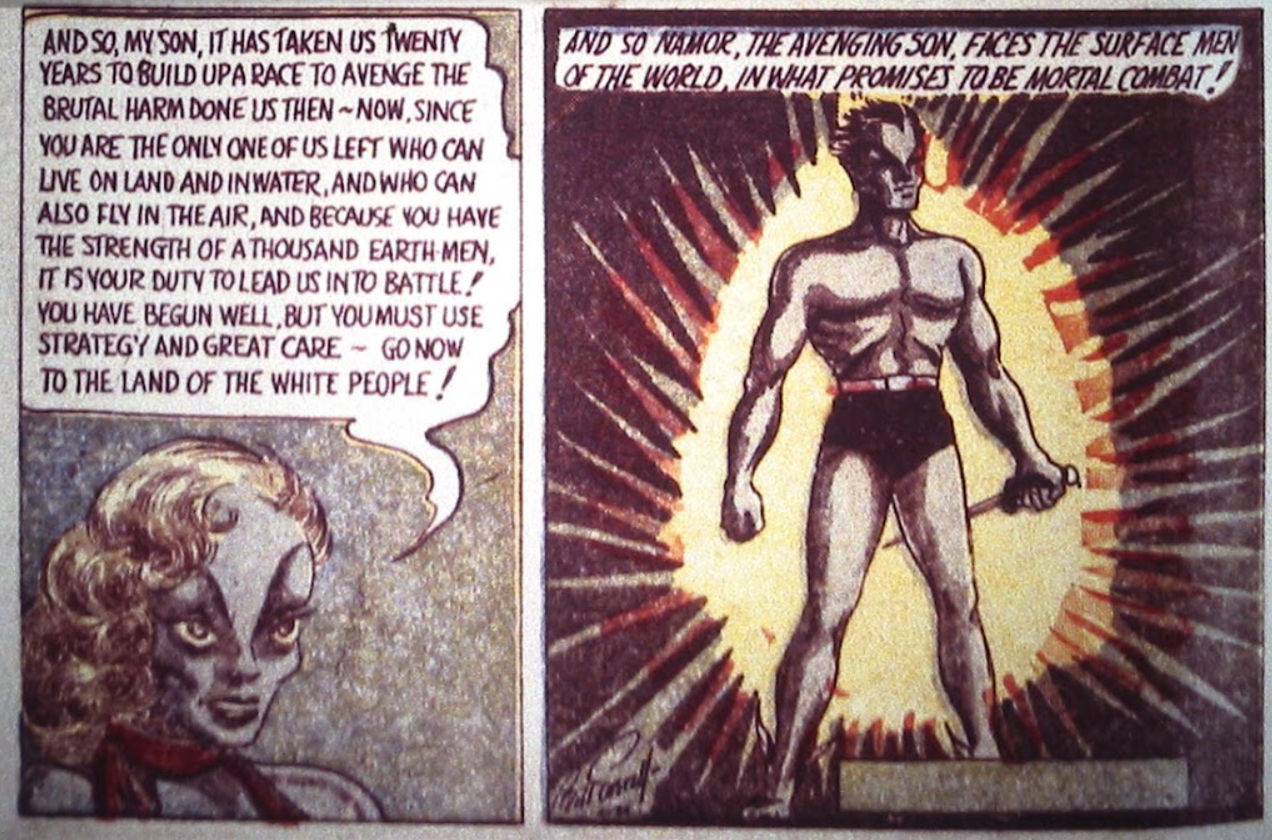 If this still isn’t enough evidence, in The Saga of the Sub-Mariner #2, it’s made abundantly clear when Namor tells Dorma, “My name means ‘Avenging Son’!” 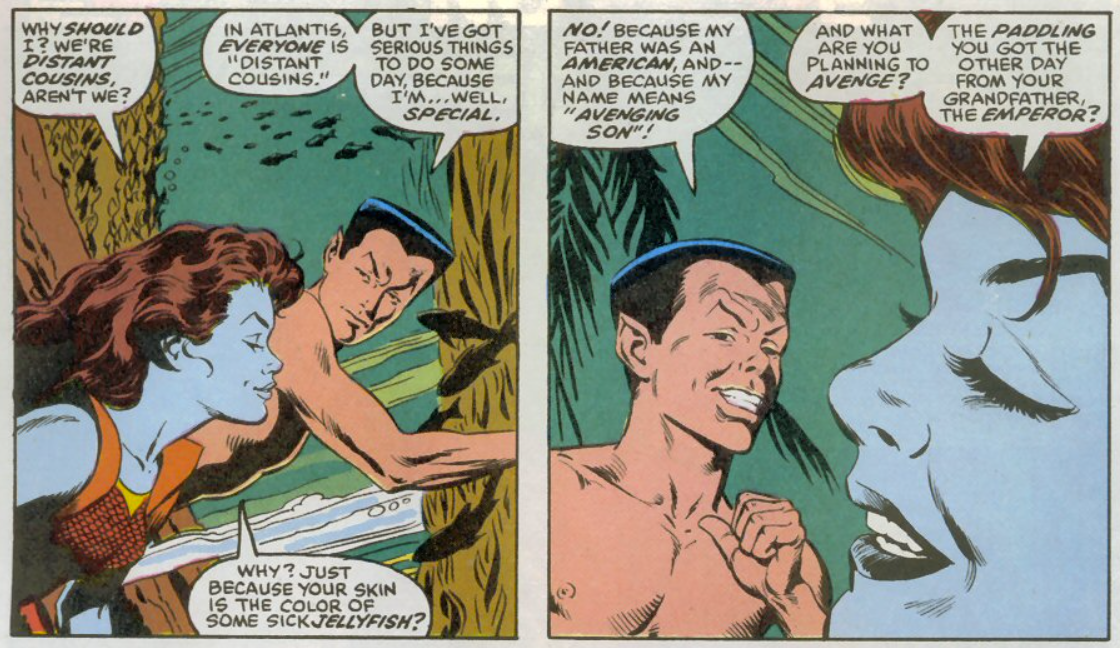 Saga of the Sub-Mariner #2, Marvel Comics

This apparently is no longer the meaning of his name according to Victoria Alonso who told Deadline in Spanish that Namor is “El niño sin amor” or the boy without love.

She then added, “Por eso le dice Namor. El niño que creció sin amor. Namor.” That roughly translates to “This is why he’s called Namor. The boy who grew up without love.”

#WakandaForever EP Victoria Alonso on the meaning of #Namor : the boy who grew up without love pic.twitter.com/MrvFqcL0Fz

As you can see in the panels above, it’s hard to imagine that Namor grew up without love. His mother, Princess Fen, clearly loved him dearly. Not only did his mother love him, but he also drew the attention of the Atlantean who would become his primary love interest, Dorma.

The Saga of the Sub-Mariner #2 reveals, “How often back then, other eyes must have watched me…their tears mingling with the salty sea, as I cavorted with Byrraah, Merrano–and now even a girl-cousin. Poor Dorma. One day I would realize she was the love of my life…”

The Saga of the Sub-Mariner #2, Marvel Comics

And by the off chance, Alonso is referring to Namor’s conception, well that doesn’t make any sense either. In Marvel Comics #1 it’s revealed that Princess Fen fell in love with the unnamed naval commander that would later be revealed to be Leonard McKenzie. The two even got married and Namor was their son.

Princess Fen tells Namor, “Well, as time went on, the commander and I fell in love, and were married by their own ritual ~ and all the while I was giving secret information back to our people…..” 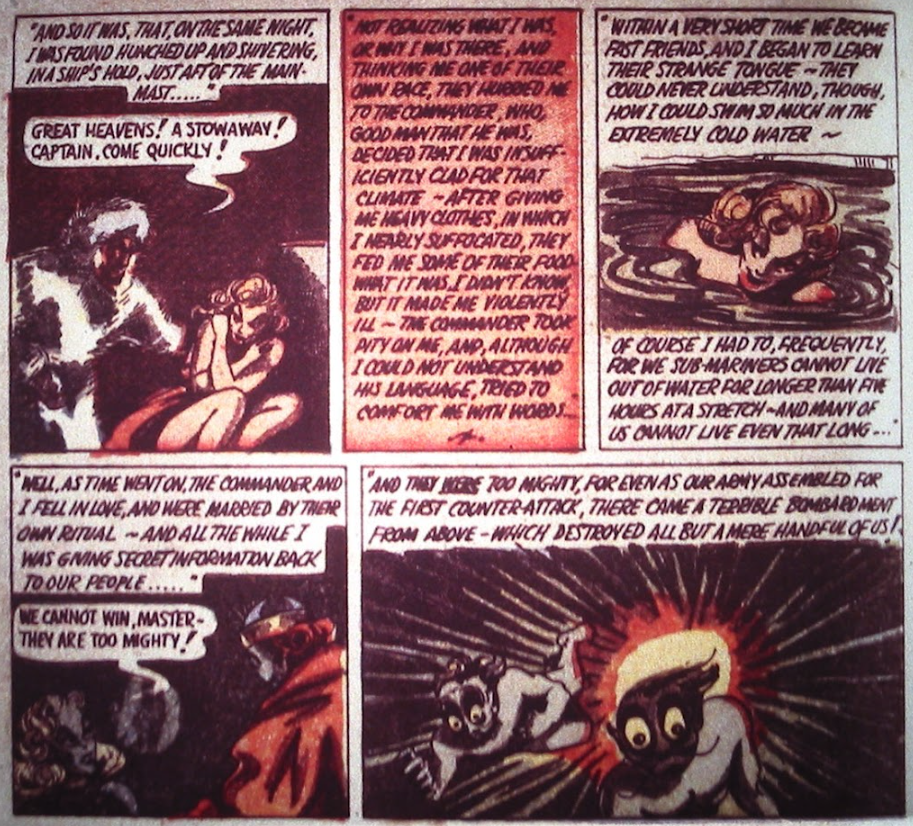 If what Alsonso is claiming is how they are defining Namor’s name in the Marvel Cinematic Universe, it’s another example that the character they are promoting as Namor for Black Panther: Wakanda Forever is not actually Namor, but just a character using the same spelling of his name given it’s not even pronounced the way it has been pronounced for almost a century.

This character has a drastically different backstory, he’s not an Atlantean. He’s from a civilization called Talokan instead. His character design doesn’t even resemble Namor from the comics. His mother doesn’t give him his name, instead his enemies do, whoever they are. His name is pronounced differently, and now his name doesn’t even mean Avenging Son.

What do you make of Victoria Alonso’s and Marvel Studios’ new meaning for Namor’s name?