Director James Gunn, now that he and producer Peter Safran are firmly in power as lead executives of DC Studios, addressed fans about things to come but he left a few salient elements out.

“Opened up Twitter at the end of a long, creative weekend to see the many tweets to #SaveLegendsofTomorrow & #ReleaseTheAyerCut & fan support for other DC projects over the years. The majority of these requests were enthusiastic & respectful,” Gunn tweeted. 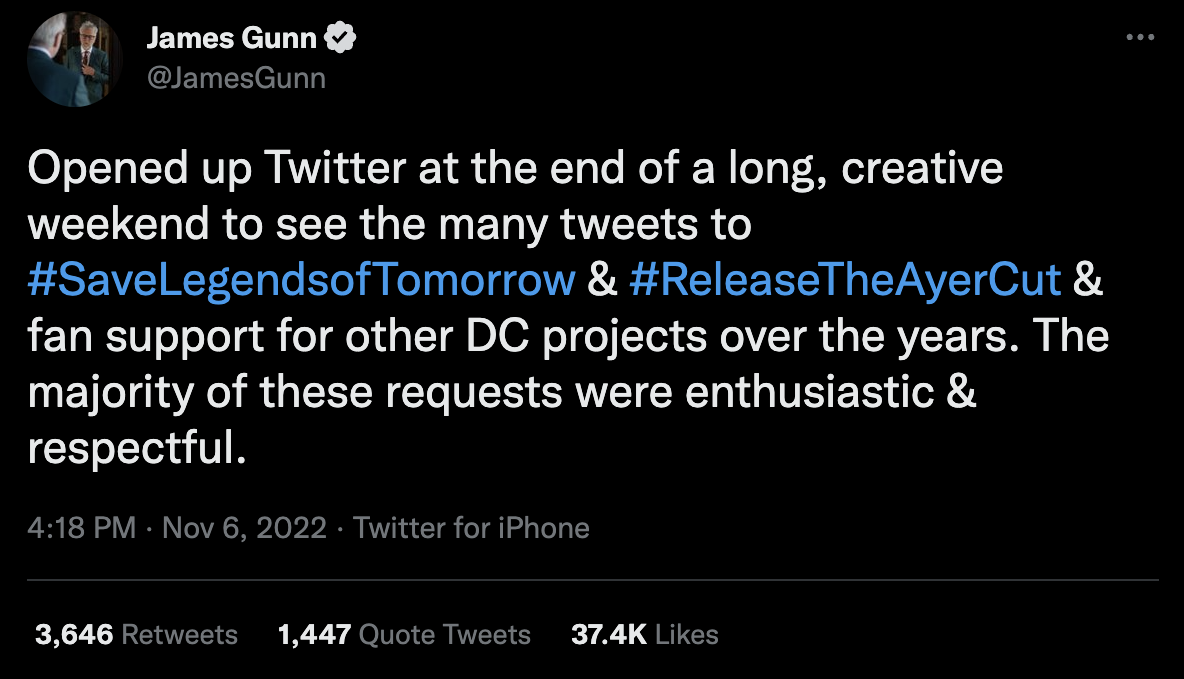 “As the new (& first ever) CEOs of DC Studios, Peter & I think it’s important we acknowledge you, the fans, & let you know we hear your different desires for the pathways forward for DC,” he added.

“Although our ability to interact on Twitter has been lessened due to the workload of our new positions, we are listening & open to everything as we embark on this journey, & will continue to do so for the next few years,” Gunn’s thread continued.

“But all our initial focus is on the story going forward, hammering out the new DCU, & telling the Biggest Story Ever Told across multiple films, television shows, & animated projects,” revealed Gunn.

“We invite all of the DC fandoms from across the multiverse — and everyone else as well — into this new universe. We can’t wait to reveal more,” he concluded.

Conspicuously absent in Gunn’s long Twitter thread is Black Adam and its stars Dwayne Johnson and Henry Cavill who it is strongly believed are playing a role in “the Biggest Story Ever Told.” Nothing leads us to suspect the contrary but the worm could suddenly be turning again behind the scenes.

Gunn hasn’t mentioned the film yet now in theaters and Johnson hasn’t congratulated him so far for getting his new job. Rumor has it the reason is they are “butting heads” over DC’s creative direction according to Cosmic Book News.

The supposed issue might stem from Shazam!, a film co-produced by Johnson and Peter Safran that almost featured Black Adam until Johnson and his Seven Bucks Productions decided not to introduce him the way he originally debuted — in the pages of Fawcett Comics’ Captain Marvel line.

Johnson has long seen potential in The Man In Black as a solo act and vetoed the motion to start him out as a villain in another franchise. This decision may have caused some friction between him and Safran creatively while also dragging Gunn and Seven Bucks co-owners Dany and Hiram Garcia into the mix.

They pled to keep Shazam and Black Adam separate for the time being and won, putting a heavier onus on Safran as an executive. A source told TheWrap, “Safran needs to win over all the other filmmakers…and Dwayne Johnson’s thinly veiled disdain for Shazam means he probably isn’t loving the idea that his boss is now the guy that produces Shazam.”

The Seven Bucks team also labored hard to bring Henry Cavill back and he is at risk of being cast aside again. He, however, is keeping an open mind.

Quoting an IGN interview, Cosmic Book News adds that Cavill remarked, “I have not met James yet. I’m looking very forward to meeting him. He’s clearly a very, very talented man, and I cannot wait to sit down and have long, long conversations with him. I’m very excited about him being there and very excited about any future opportunities we can work together.”

A Man of Steel follow-up is reportedly in early development so Gunn may likewise be as open to working with Cavill as he is to revisiting other aspects of the early Snyderverse — like David Ayer’s Suicide Squad.

Gunn referred to the Ayer Cut in his first tweet and the hashtag campaign aiming to have it released. Things look positive on that front when you take into account Ayer quote-tweeting Gunn’s initial posting.

“Beautifully said James. DC is lucky to have you,” he commented to which Gunn responded with a heart emoji.

While this doesn’t confirm the Ayer Cut of Suicide Squad is going to be finished and released, it’s certainly a hint Gunn — director of the 2021 follow-up — could consider the idea.

NEXT: Scott Eastwood’s Famous Father Convinced Him Not To Appear in James Gunn’s The Suicide Squad