Giving credence to previous whispers that the Daywalker’s upcoming Marvel Cinematic Universe debut is shaping up to be nothing short of a disaster, a new set of supposed plot leaks has suggested that not only will the upcoming silver screen reboot of Blade feature a plot which reads like the most basic of Young Adult novels, but also – in modern Marvel fashion – serve to set-up a female successor to inherit the title hero’s mantle. 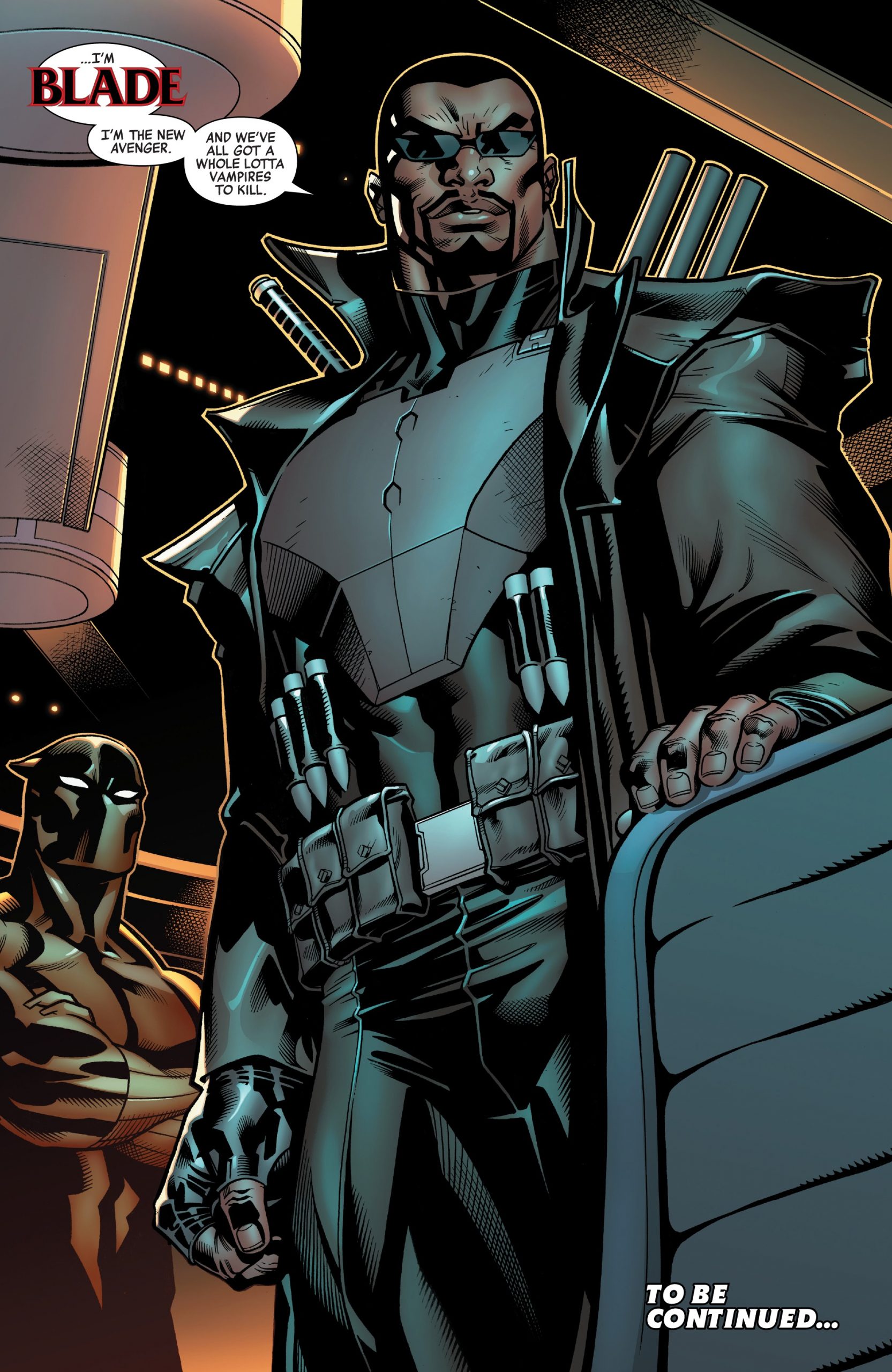 First shared to 4chan’s /tv/ board on November 29th, the alleged leaks claim that the film will begin in “1920s New Orleans” and open on “Blade’s pregnant mother Tara Brooks, who visits Dr. Deacon Frost for treatment only to discover that he is a vampire preying on outcasts like her.” 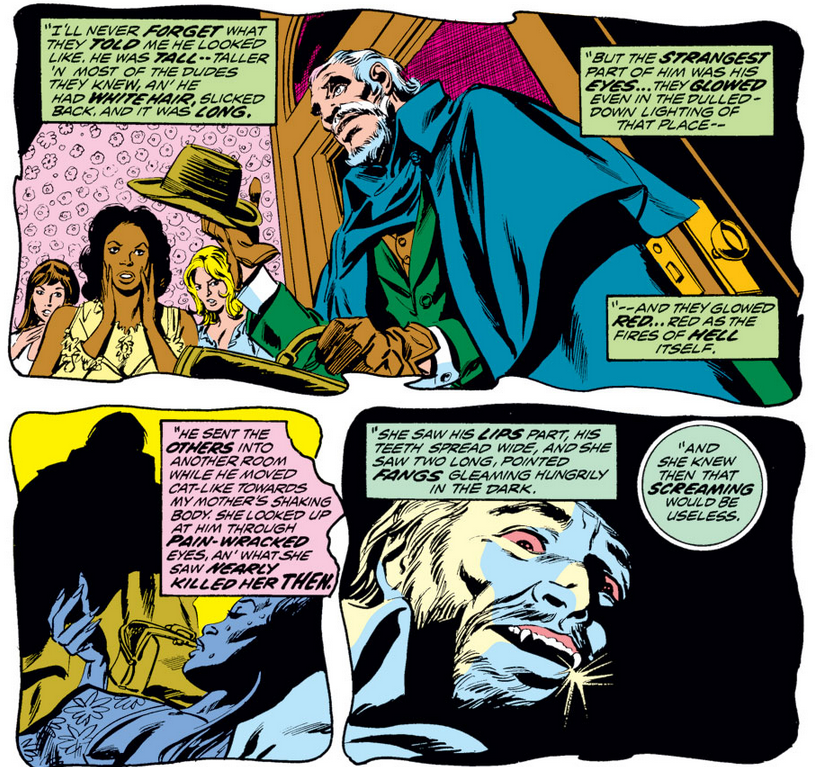 From there, the film will suddenly skip ahead 50-years to the 1970s to find “vampire hunters Rachel Van Helsing and Hannibal King infiltrating a vampire gathering.”

In typical movie fashion, the pair are soon found out, only managing to escape a gruesome fate thanks to the timely intervention of Blade (Mahershala Ali). 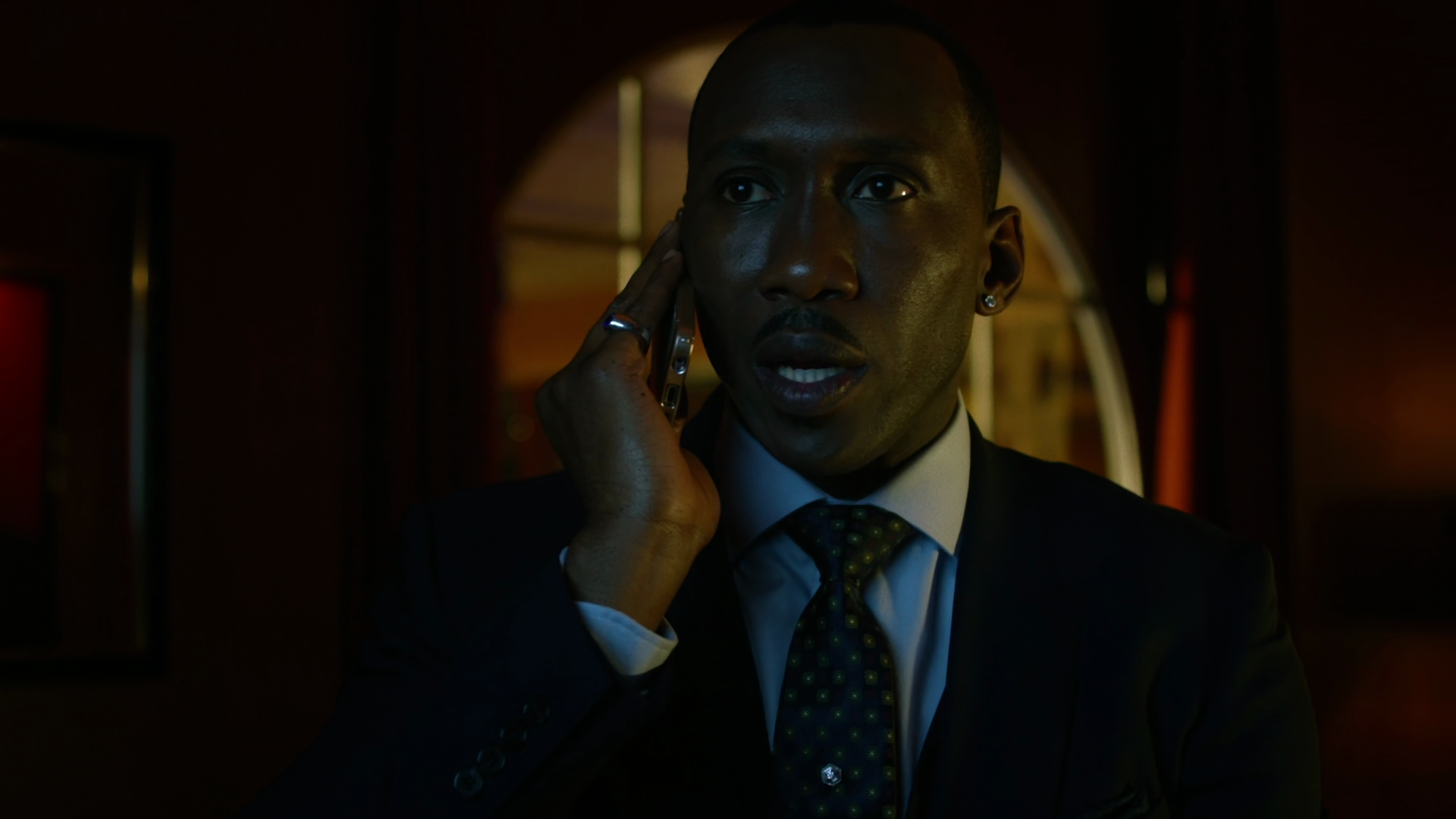 In the aftermath, Blade is approached by “Quincy Harker and his enforcer Taj Nital,” the former introducing himself as Van Helsing and King’s employer.

Explaining that he has taken to hiring mercenaries to help him in “retrieving a weapon that the vampires are after,” Harker then extends a contract invitation to the hunter.

Initially, “Blade refuses” the offer – that is, “until he finds out the weapon is with Frost.” 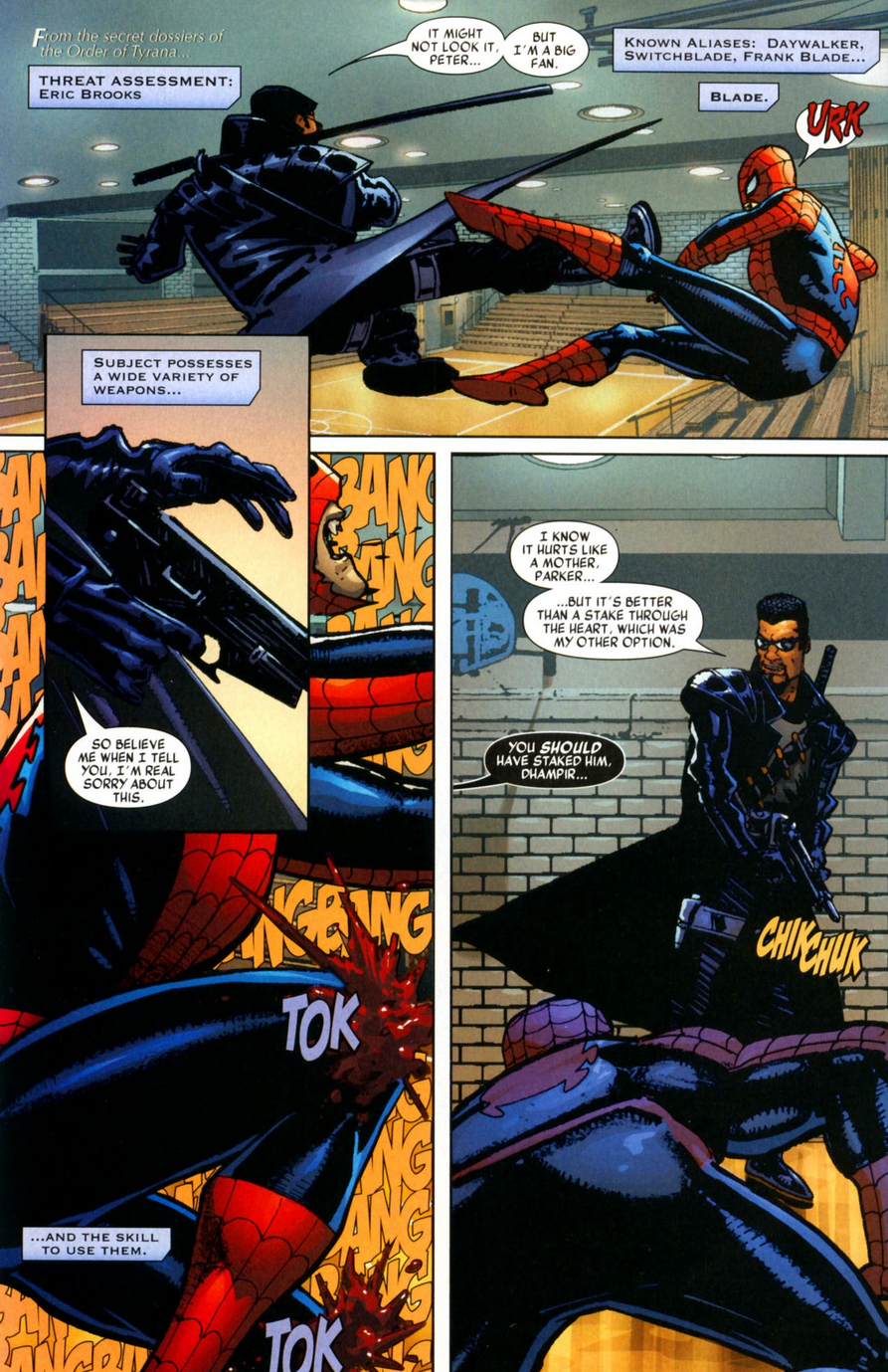 This mention of Frost then triggers a flashback for Blade, who proceeds to harken back to the 1920s and recount how “Frost fed on Tara and left her baby, Eric, die in the streets, but a prostitute found and raised him until his vampirism manifested and she abandoned him.”

Skipping ahead a few years, Blade’s trip down memory lane then turns to the fateful day of his adolescence where “young Eric tried to save an elderly blind musician from a vampire attack only to learn he was a legendary vampire hunter, Jamal Afari, known as “Blade” for his silver sword.” 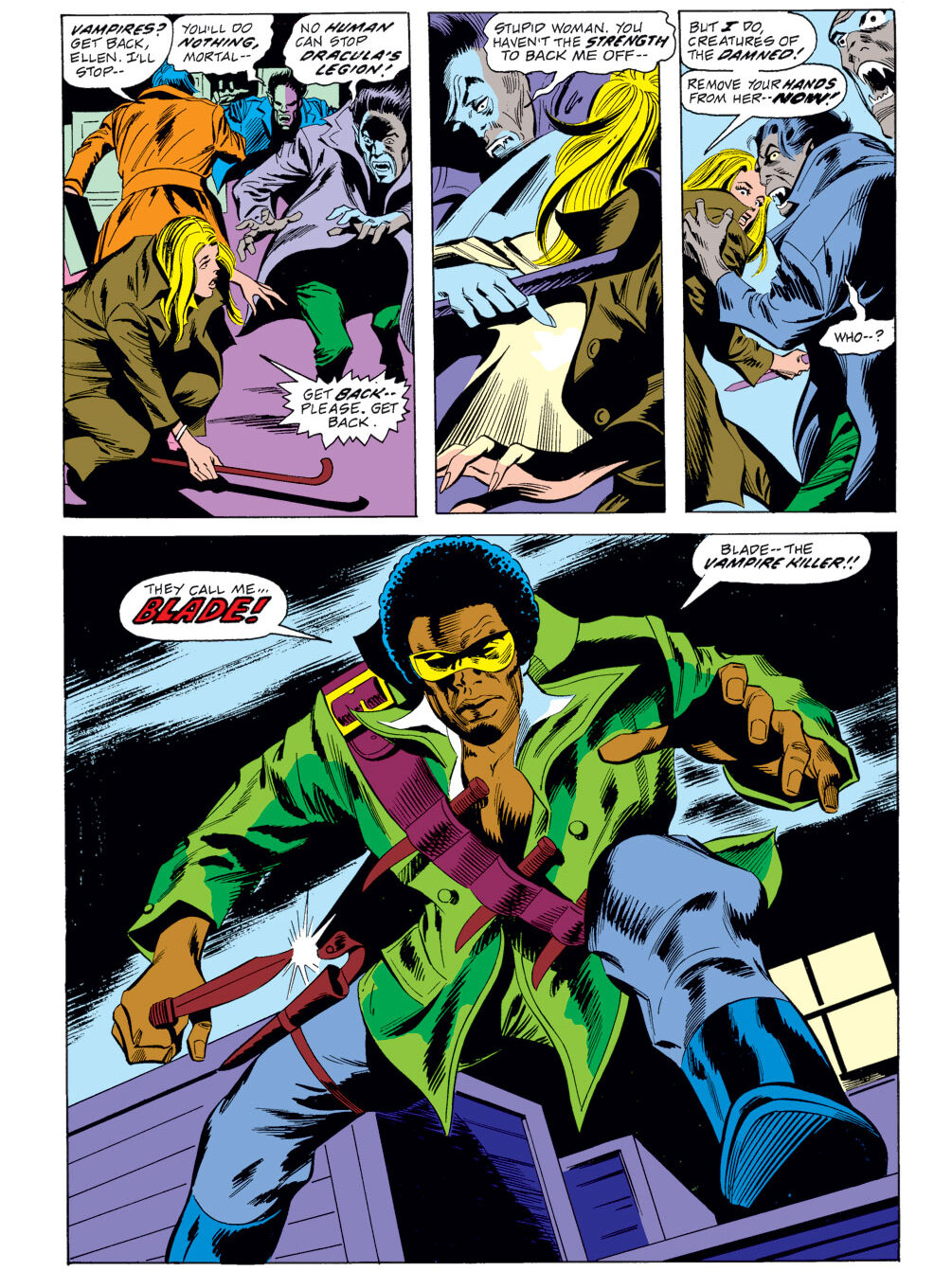 After learning that “Eric was a vampire immune to sunlight,” Afari then “adopted the boy and trained him” until he “eventually became the new Blade.”

Before the flashback ends, audiences are treated to one final bit of foreshadowing, as it is shown that “during his adolescence, Eric fell in love with Saffron Caulder, the daughter of the singer at the club where Jamal performed, but Jamal forbid the relationship.” 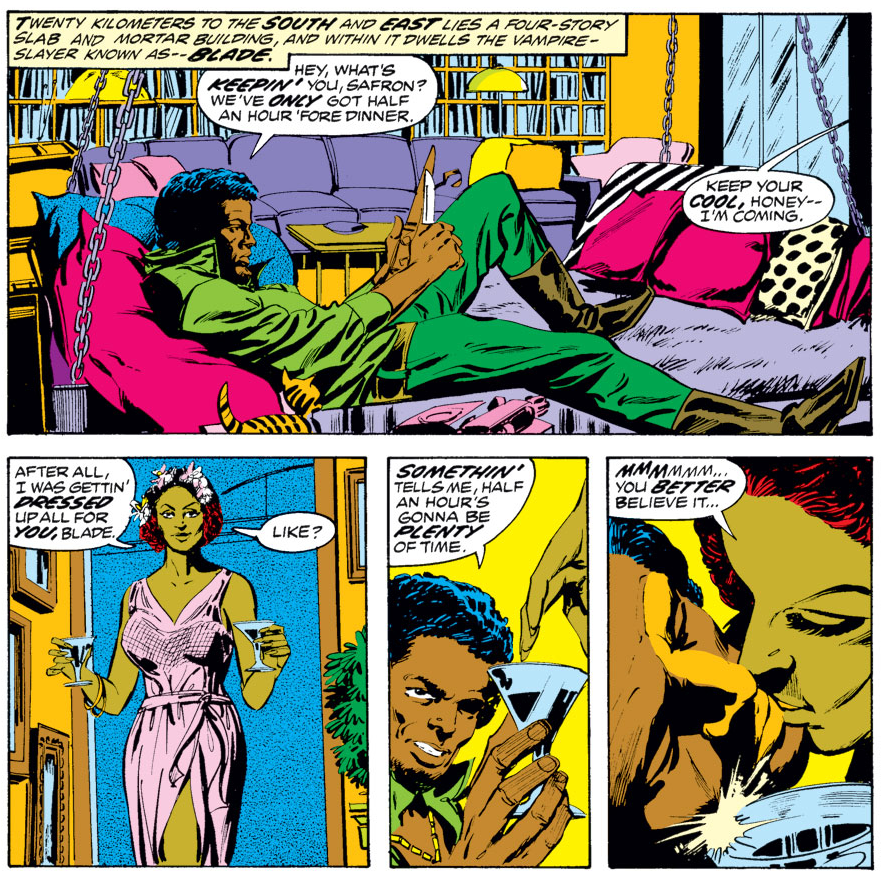 Returning to the present day, the film finds Blade, Van Helsing, and King, undertaking a “raid of an underground lab” on behalf Harker.

However, after making their way into the heart of the facility, the trio are stunned to find that Frost’s “secret weapon” is not an item, but rather “a teenage girl who is a Daywalker like Blade.”

After freeing the young girl, Alex, from her restraints, the four are soon set upon by “rival vampires who oppose Frost’s genetic experiments,” to which they respond by successfully fighting their way to freedom. 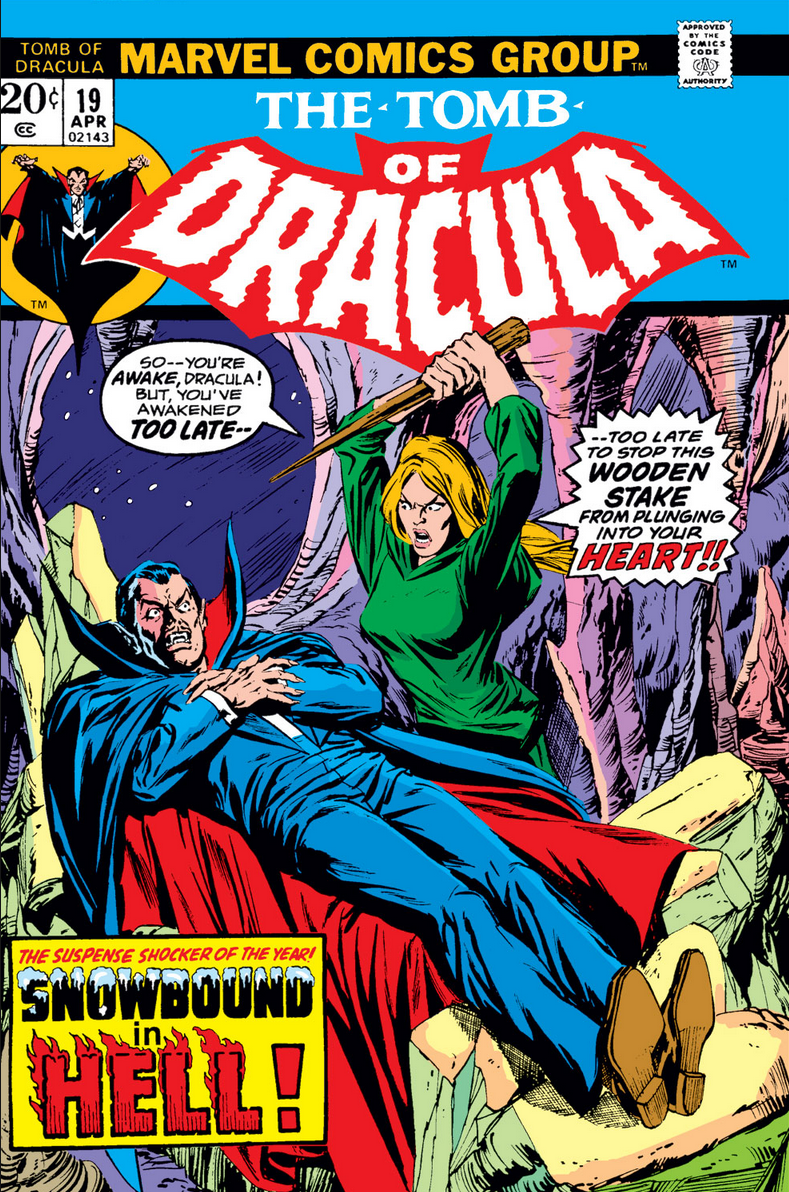 Rachel van Hel Sing prepares to plunge a stake into the heart of Dracula on the cover to Tomb of Dracula Vol. 1 #19 “Snowbound in Hell!” (1973), Marvel Comics. Art by Gil Kane and Tom Palmer via digital issue

Cue another flashback, this time to Eric’s time fighting alongside Afari, where it is explained that “Jamal and Eric once confronted Frost and seemingly killed him, but Jamal was bitten in the process, and he killed himself rather than turn.”

Further, it is explained that “Frost had genetically altered himself to control all the vampires he creates, and kept several as slaves, including Blade’s mother, forcing Blade to mercy-kill her.” 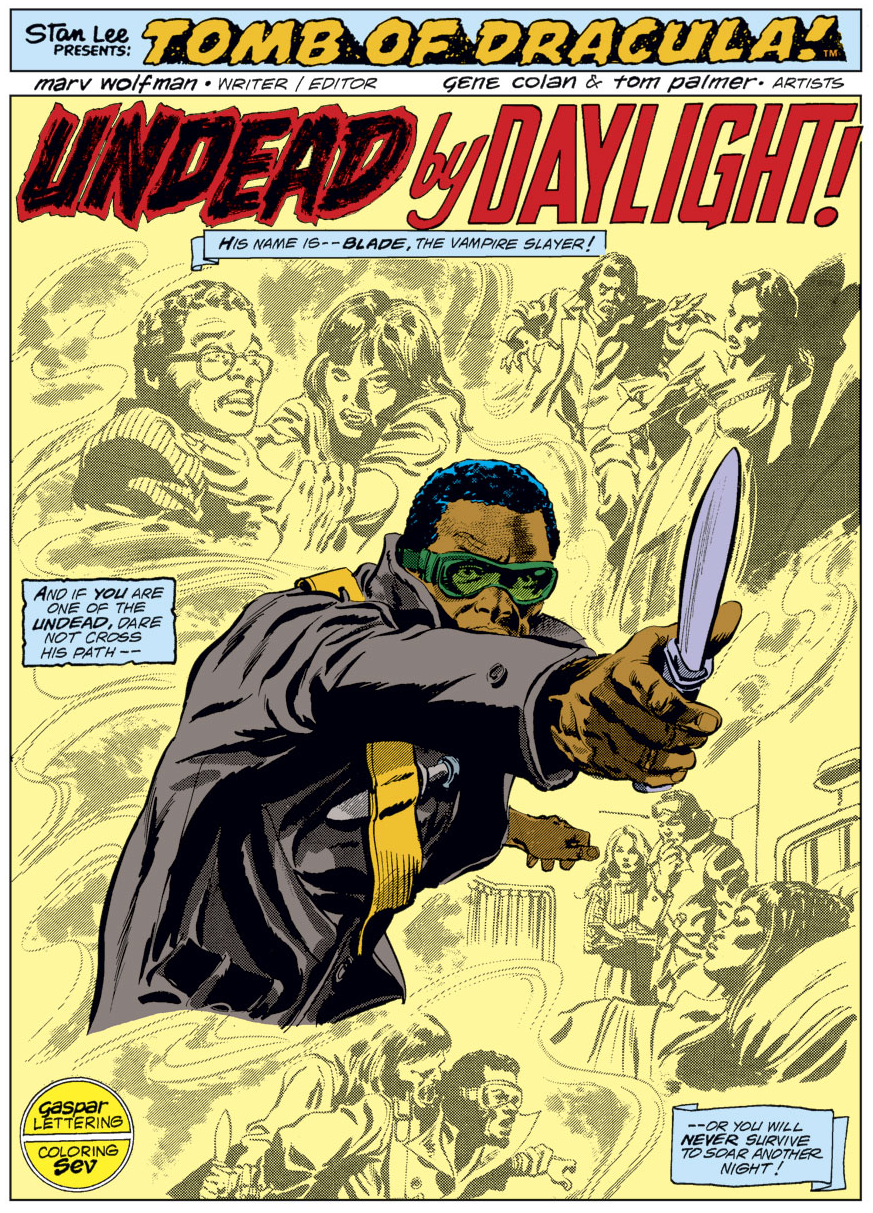 Jumping back to the present, Alex, understandably in fear of her life and unfamiliar with her rescuers, near immediately “tries to run from the hunters,” only to run into another group of “vampire assassins.”

Luckily, Blade is not far behind, and with his help, Alex is able to fight off her would-be killers. As the dust of battle begins to clear, Alex then “recounts how Frost tortured her”, to which Blade responds by “promising to protect her”. 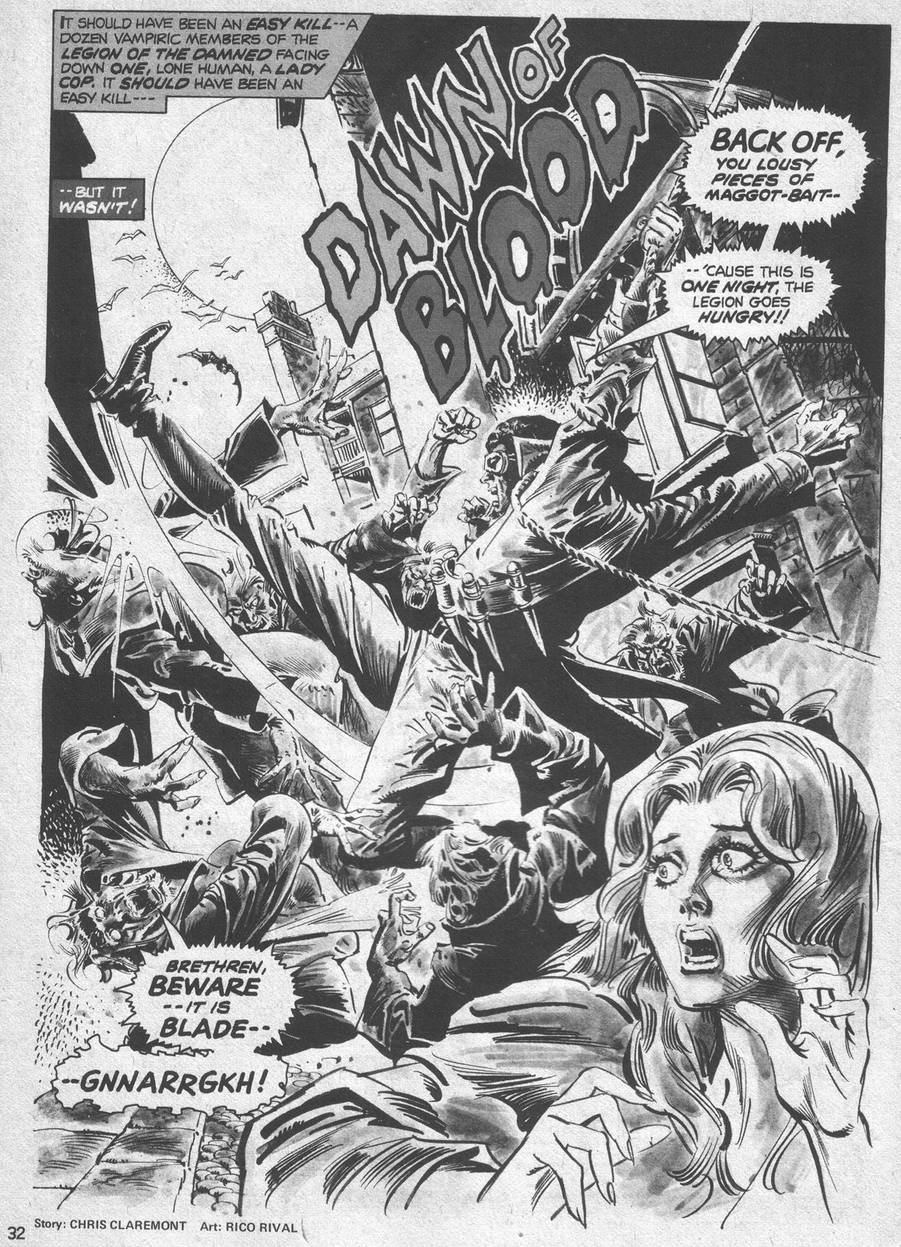 Dusting themselves off, Blade and Alex next make their way to “the Harker estate so Harker can help her,” but upon their arrival, “Harker double-crosses them and announces that he must kill Alex.”

The reason for this heel turn, the financier reveals, is his discovery that Frost seeks to harness the pair’s Daywalker mutation in order “to turn his followers into Daywalkers as well, so Harker decides it’s too dangerous to let Alex live.” 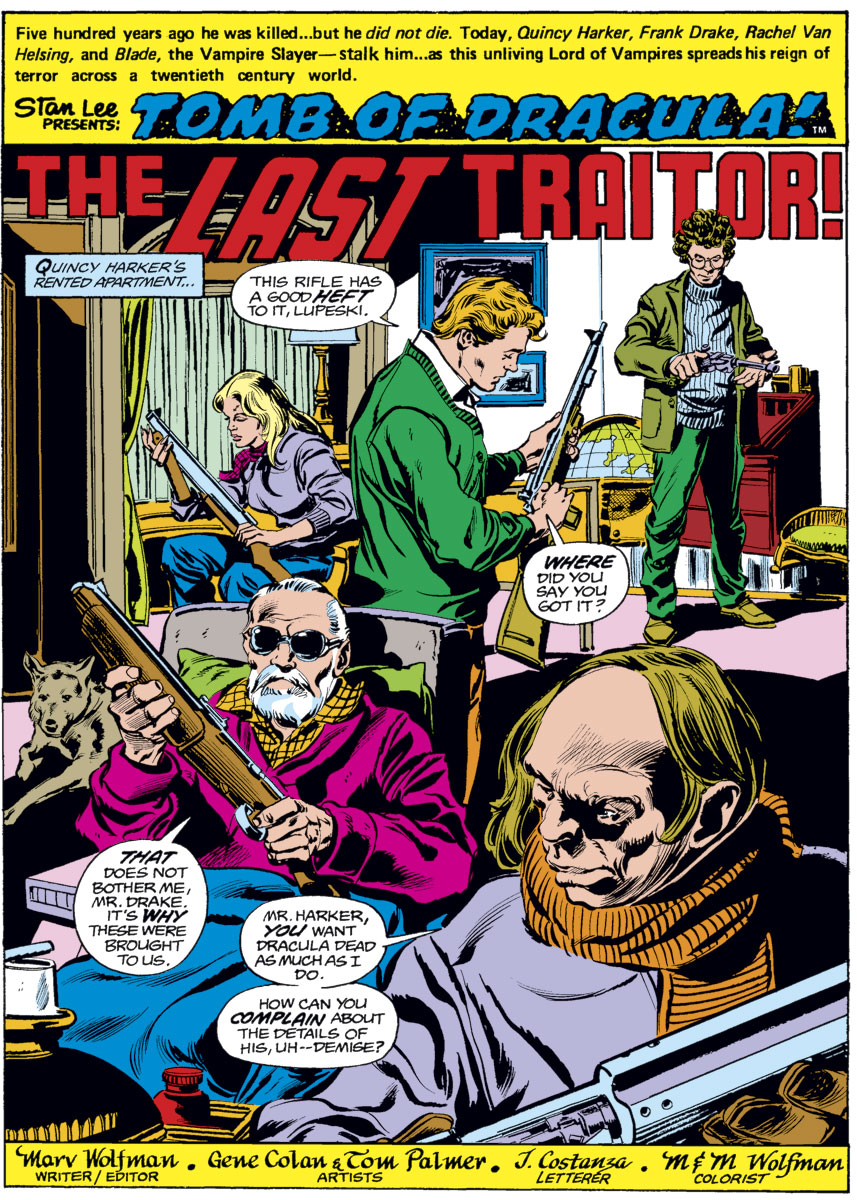 Of course, “Blade objects”, but alas is quickly “overpowered and captured by Nital.”

In typical villain fashion, Harker then informs Blade that Alex is actually his daughter, conceived on the last night he and Saffron spent together before he set out on his mission. 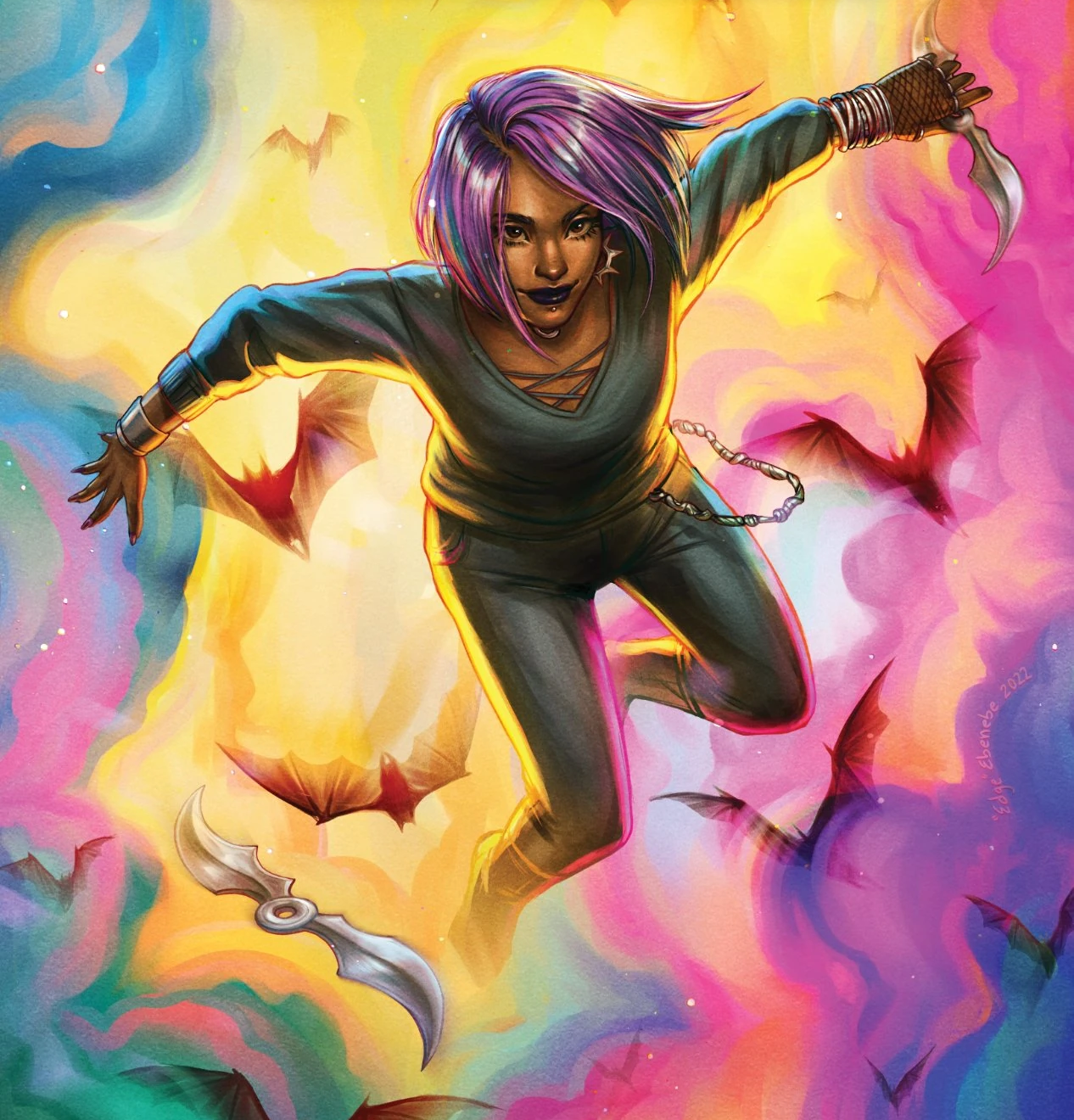 Though all seems lost, Van Helsing and King choose that moment to reappear in dramatic fashion, swooping in to free Blade from his restraints and “rescue Alex before Harker can kill her.”

Notably, this escape also sees Blade meet Nital in combat, a clash which ultimately ends in the death of the hired hand. 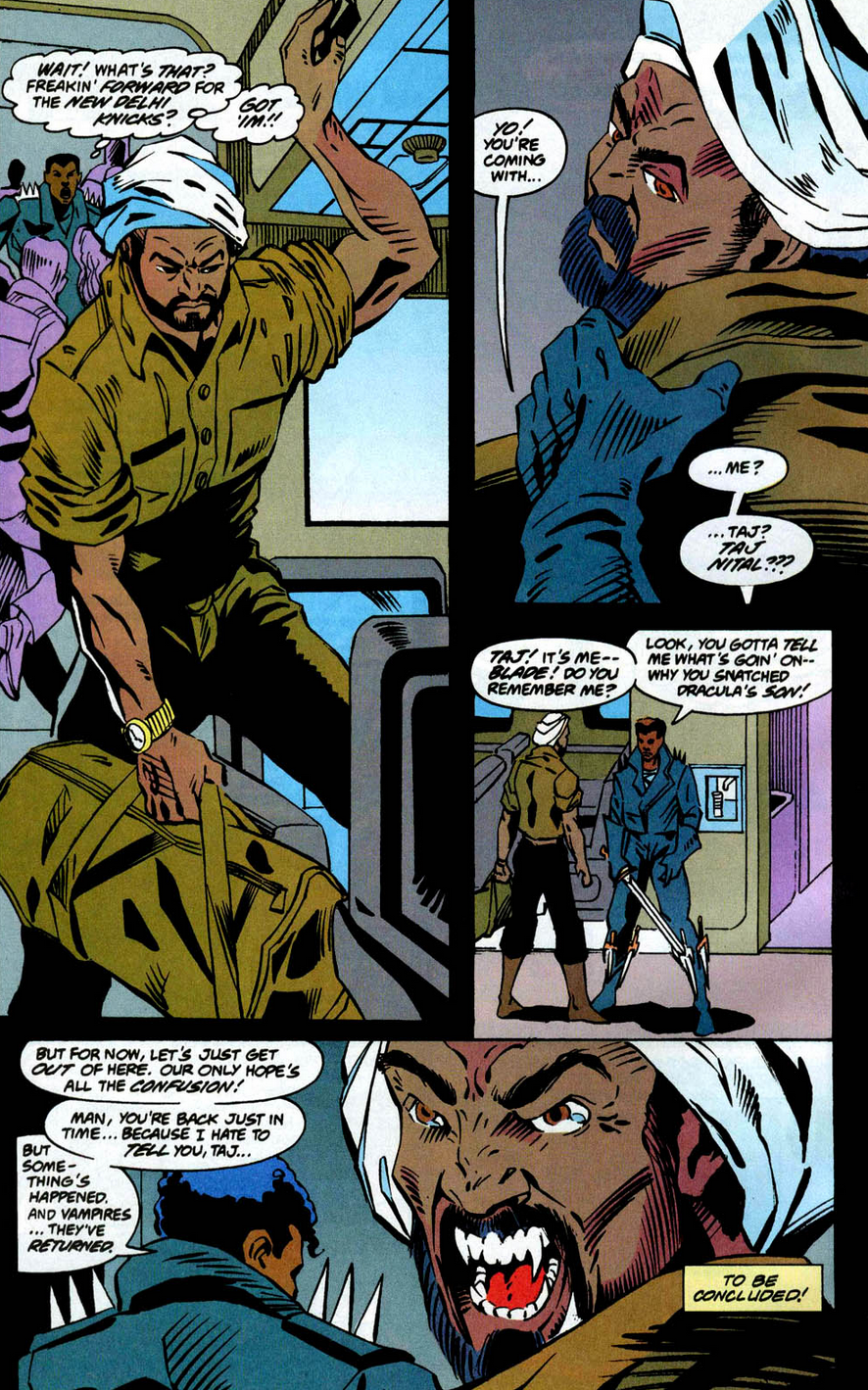 Suddenly, King begins to lure Frost and his followers to the team’s location, to which “Rachel realizes Frost turned him during the raid and King is now under Frost’s control.”

Unfortunately, this realization comes too late, as Frost has already zeroed in on his desired prey. 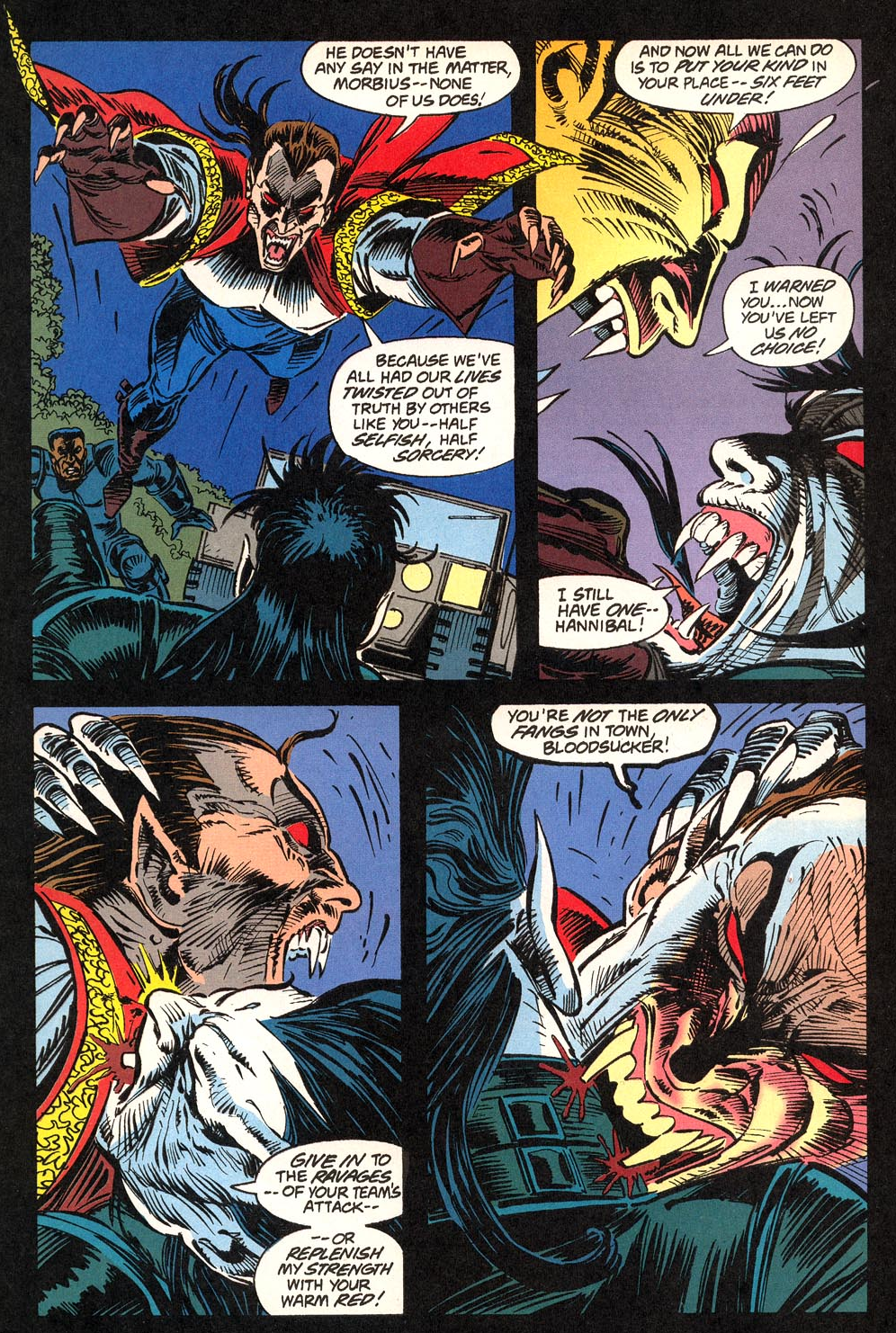 Meeting the heros face to face, “Frost reveals that he killed Saffron and abducted Alex to extract her DNA, and tortures Blade about taking all the women Blade loves.”

Adding injury to insult, Frost then “kills Harker and prepares to transform his followers into Daywalkers.” 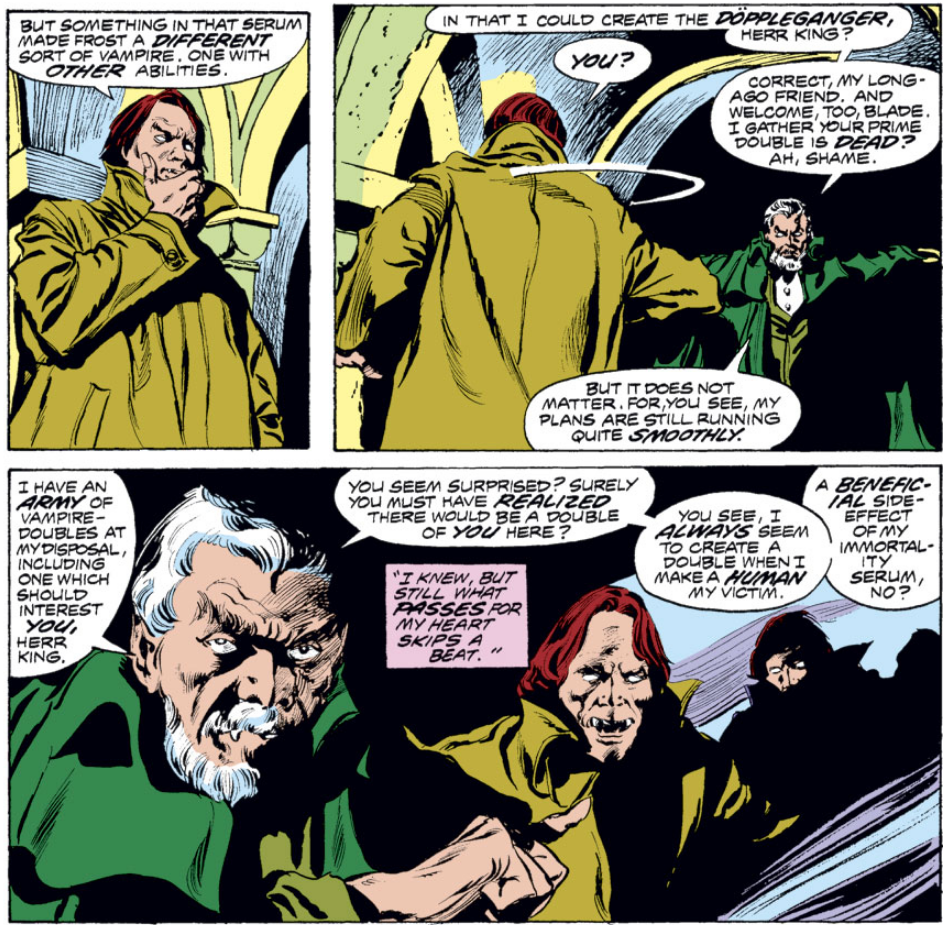 Yet, before Frost can follow through on his plans, “the rival vampires arrive and a threeway battle begins.”

During the melee, King “overcomes Frost’s control and sacrifices himself to destroy Frost’s followers while Blade fights the rival vampires and Van Helsing rescues Alex.”

In the midst of this carnage – all of which will be completely bloodless, as Kevin Feige’s declaration that Deadpool 3 will be the only R-rated MCU entry indicates Blade will do all it can to score PG-13 approval – the Daywalker eventually comes face to face with Frost. 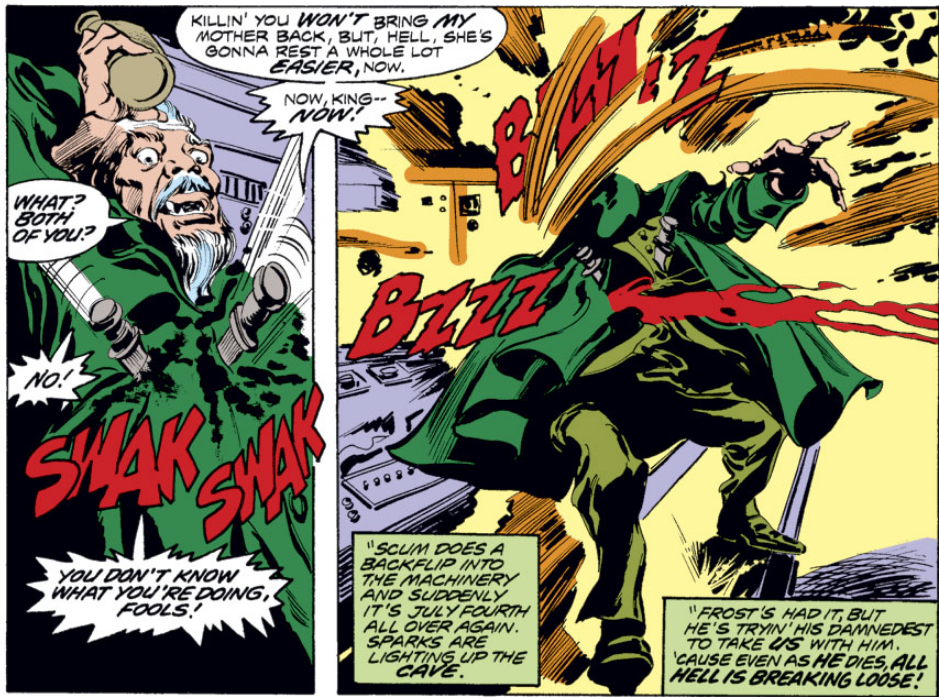 But ultimately, Frost proves too much for Blade, and the hero eventually finds himself on the brink of defeat.

However, he is rescued at the last second by Alex, who “stabs Frost with the sword.”

This interruption allows Blade the chance to “expose them to sunlight,” which in turn destroys Frost once and for all. 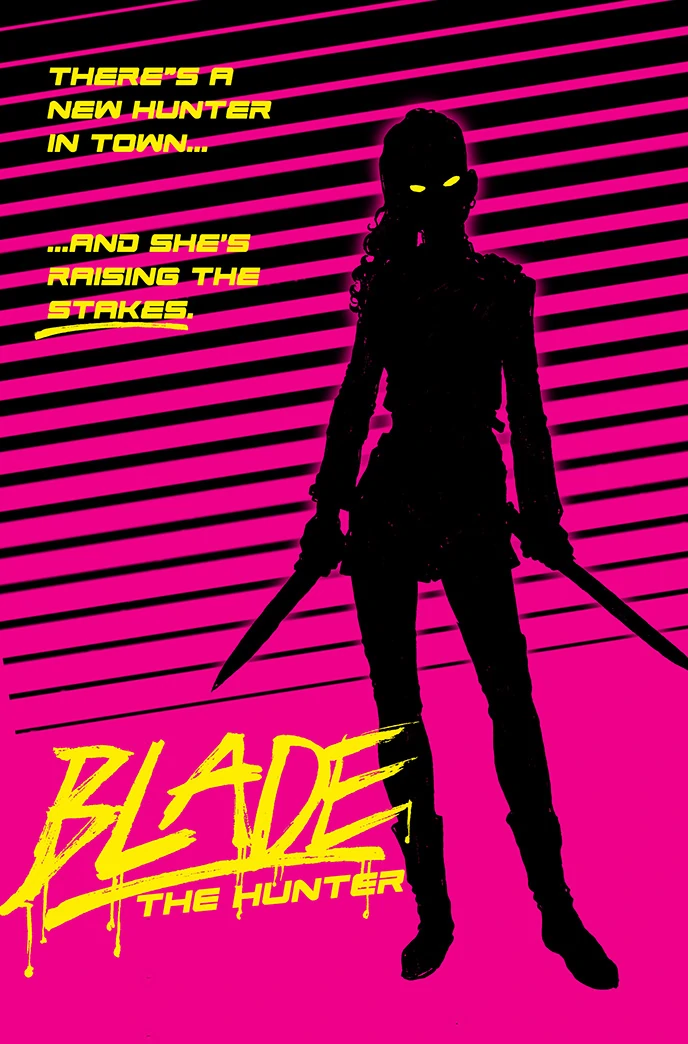 As the film begins to wrap, Blade’s “Van Helsing takes over Harker’s operation while Blade and Alex leave together, with Blade telling Alex he is her father and taking her as an apprentice, telling her one day the sword will be hers.”

Finally, the movie is said to end “with a flashforward to present day with older Blade and adult Alex still hunting vampires.” 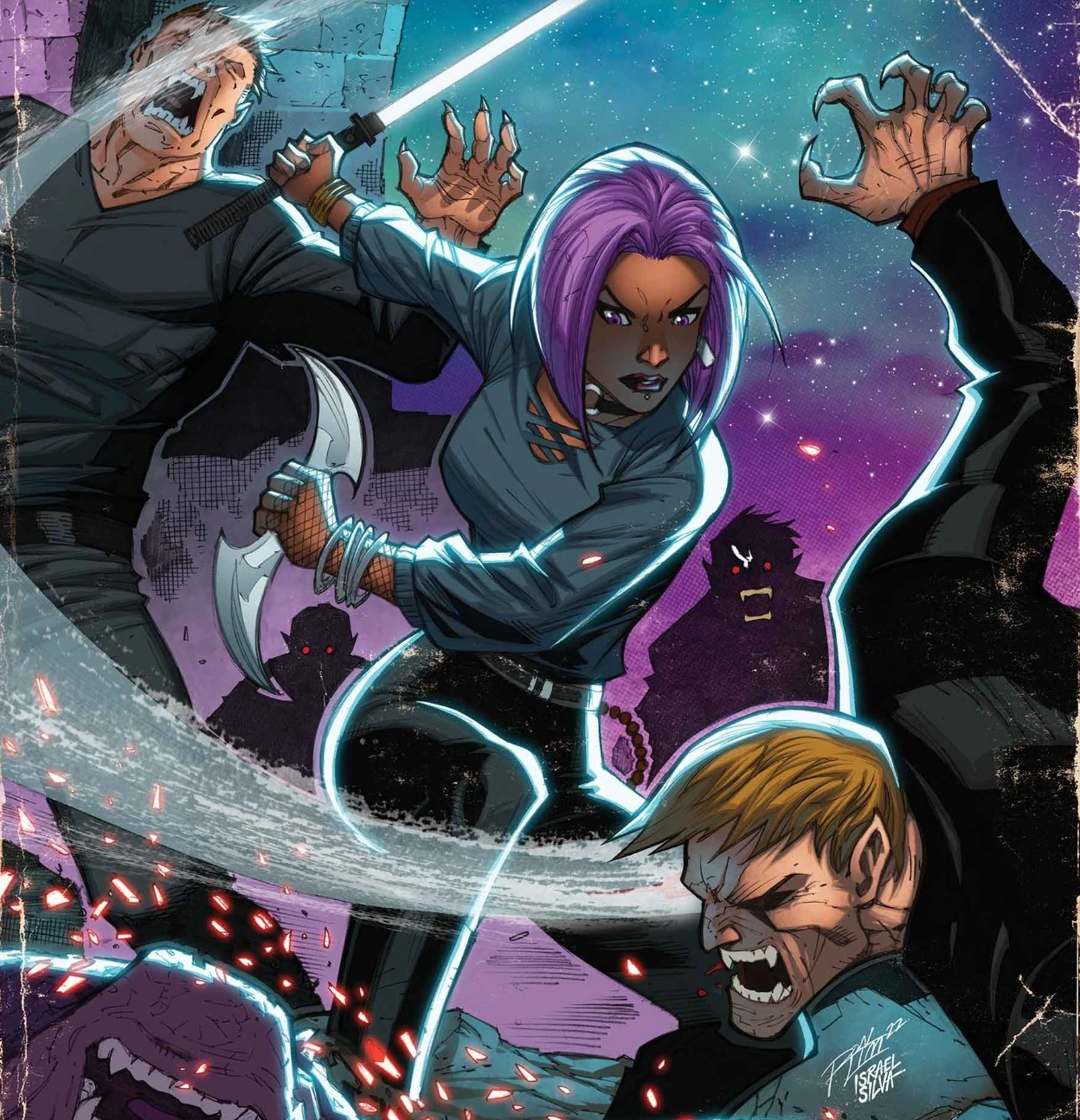 Interestingly, though this is only the rumored plot of the MCU’s take on Blade, Marvel Comics will begin publishing a thematically similar miniseries, Bloodline: Daughter of Blade, in February 2023.

“Brielle Brooks is a good kid, no matter what her teachers say – it’s not her fault she’s developing vampiric super-powers and the undead want to brawl!” reads a solicit for the series. “And as if problems at school aren’t enough, Bri’s got a wild ride ahead of her – she’s about to discover that she’s the daughter of the infamous vampire hunter and Daywalker known as BLADE!” 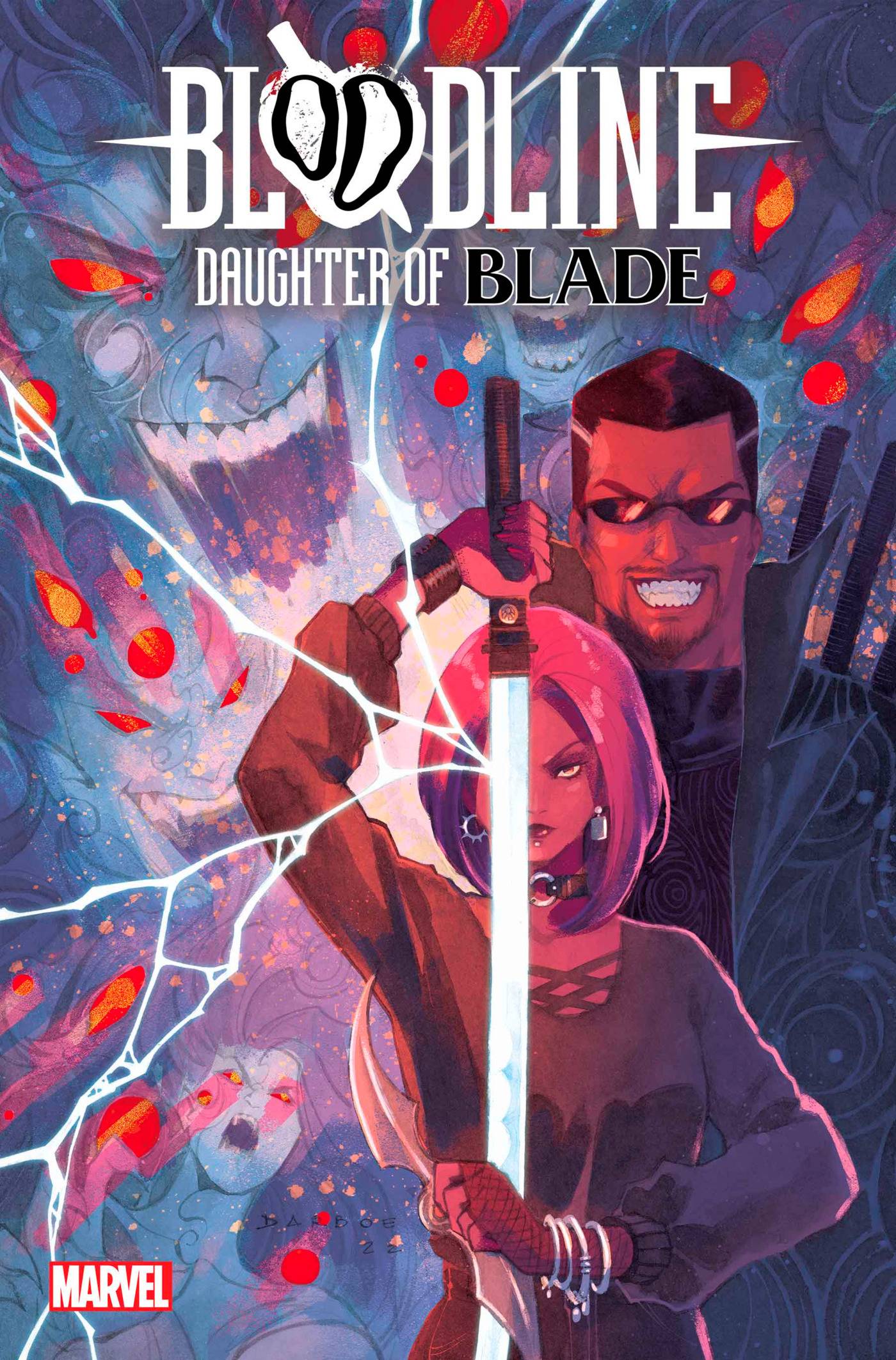 NEXT: Marvel Studios Producer Considers It A “Red Flag” If Prospective Writers Are Fans Of Original Comics, Prefers To Hire Someone “Who’s Out Of The Culture”