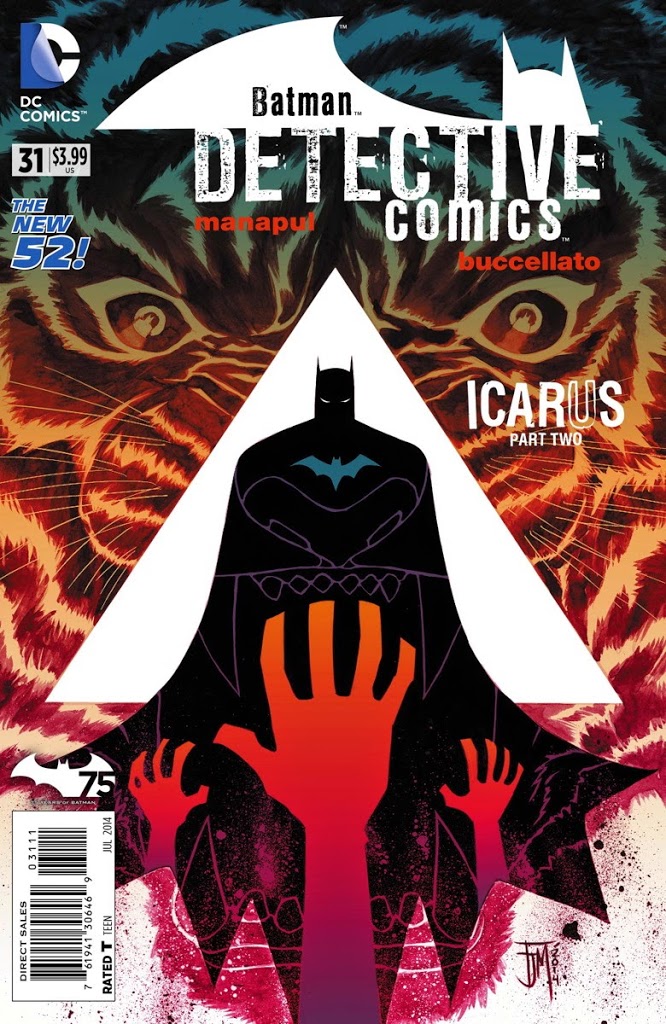 Manapul and Buccellato begin Icarus Part Two smack dab in the middle of a crime scene at Wayne Manor. The reader is finally introduced to the title story line “Icarus” an addictive drug that cost the life of the investigating detective’s (a familiar face) partner six years ago.
Batman, now has a mystery on his hands, and creates an excellent opening for Manapul and Buccellato to embrace the detective in Detective Comics, which they do fabulously. The two do a remarkable job of displaying Batman’s ability to recreate the crime scene and visualize the crime as it happened. The use of panels within panels and the placement of Batman’s face above the panels really hit home his ability to visualize the crime.
The story progresses with an interesting compare and contrast between our police detective and a drug dealer, named Ash. Both are attempting to pursue the source of the Icarus narcotic, but both take different paths. Our detective attempts to interrogate a few of our street thugs from last episode, while Ash is working the streets looking for a supplier. Both paths lead to completely different results, with one being a complete shock, but a very pleasant surprise that really reinforces the Detective aspect Manapul and Buccellato are aiming at.
Detective work often leads to venturing into the dark and dirty areas of Gotham, where action is bound to occur. The creative team doesn’t disappoint when Batman follows a lead taking him to the inside of a loading container. This is no ordinary loading container but is filled with peril. The ensuing fight is a warm welcome and excellent climax to the buildup. The combination of the reds and blacks do a great job of portraying not only the violence in the scene, but also the intensity and willpower inherent in the Dark Knight. The intensity is also enhanced with the sheer number of panels with a total of 14 on one page really giving readers a blow by blow of fists smashing into heads and knees crunching into stomachs.
Manapul and Buccellato fleshed out the intriguing story line, but still kept many secrets close to the chest. They did an excellent job using the frictional relationship between Bruce Wayne and our ‘friendly’ detective to drive the story with Bruce giving some sound advice “Follow the Evidence”. Advice our hero does an excellent job of following.