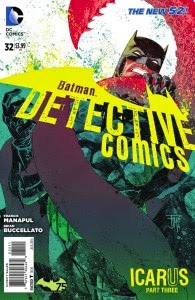 Francis Manapul and Brian Buccellato keep the story moving in Detective Comics #32: Icarus Part Three. Batman is in detective mode after his lengthy fight with Sumo. He even helps out our friendly or not so friendly Detective Bullock with an anonymous tip. As expected Bullock isn’t thankful at all; he is rather upset and decides to take it out on the rest of his investigative team.
The contrasting nature between Bullock and Batman is definitely a theme Manapul and Buccellato are pushing. Batman, uses his detective skills and finds leads, while Bullock bullies and orders his fellow police officers around to do the job, he should be doing!
The book shifts drastically into an emotional scene with Annette and oddly enough Batman attempting to console her on a pier. The scene is very strange, although it definitely creates a bond between the two and hints at where Manapul and Buccelatto are going to take her in the future. The scene doesn’t really engage the reader in the emotions it is attempting to harness; mainly it seems too contrived.
Following the rather lackluster sequence with Annette, Manapul and Buccelatto get back to pushing the story along and giving the reader a taste of mystery with the introduction of Wayne Enterprises employee Jeb Lester and his mysterious friend. Unlucky for Mr. Lester, Bullock actually appears to be doing his job. The mystery or Mr. Lester and his friend will have to be solved another day, since Batman is on the trail of “The Squid”.
Unfortunately, Buccellato and Manapul forego direct interaction with Alfred and instead use him as plot device to triangulate “The Squid’s” location. They do make up for it, with some comedic relief from screw-up Johnny and his antics. The comedic relief sits beside a wonderfully drawn action sequence, where the World’s Greatest Detective has to deploy all the tricks in his utility belt, and even suffer a not so subtle entrance from our favorite Kings! The dialogue through this entire sequence is absolutely wonderful and does a great job of foreshadowing the cliffhanger ending.