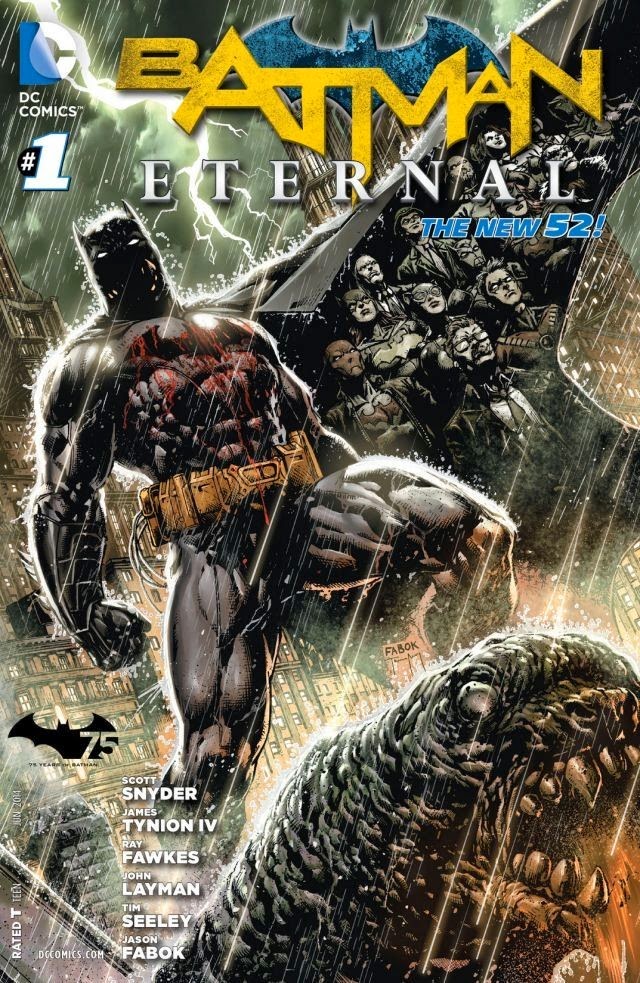 Writers Scott Snyder and James Tynion IV start off with giving us the ending! An ending with no context triggers readers’ imaginations, wondering exactly how billionaire playboy, Bruce Wayne, has found himself in this situation. The crowning achievement of the opening page is Jason Fabok’s use of an iconic depiction that brilliantly captures the gravity of the situation. Bruce Wayne is in dire straits.
Switching gears, Snyder and Tynion IV, introduce us to Gotham and how lively it is especially at night where “there’s some shade of light coming at you.” Fabok does a great job of contrasting the Gotham, the reader sees at the end to what it is now in the present. If the magnitude of the story wasn’t already setup on the first page, Fabok cements it on the second.
Following a brief introduction of one Jason Bard, Snyder and Tynion IV kick the book into high gear, with an intriguing action sequence involving a villain named Pyg, one whom this reviewer has never heard of. He seems to use some type of serum, although it is rather unclear what exactly it does. One point of contention in the sequence, is the super suit Batman seems to be occupying resembles something Ironman would use, not Batman. Not only does Batman have an Ironman suit but he seems altogether massive, there is one panel where he is running side by side with Jim Gordon and his biceps are the size of Gordon’s head!
Snyder and Tynion IV take a short break from the action, to paint a bleak picture of the GCPD in the form of Major Forbes. They quickly return to Jim Gordon, where Snyder and Tynion IV use Fabok’s art to toy with the reader a little bit, having the reader see in the art contradict the words they see on the page. Not only is the reader duped, but so is Batman.
The result leads to a great show of emotion by Jim Gordon, he is shocked, in disbelief, and emotionally distraught. The bizarreness of the sequence let Snyder and Tynion IV use Gordon as an audience surrogate, or let him address exactly what the reader is thinking. He says exactly what the reader is thinking and questions the validity of the sequence. Unfortunately, he is the only one. This sets up an ominous ending, demanding the reader to discover the Grand Design!