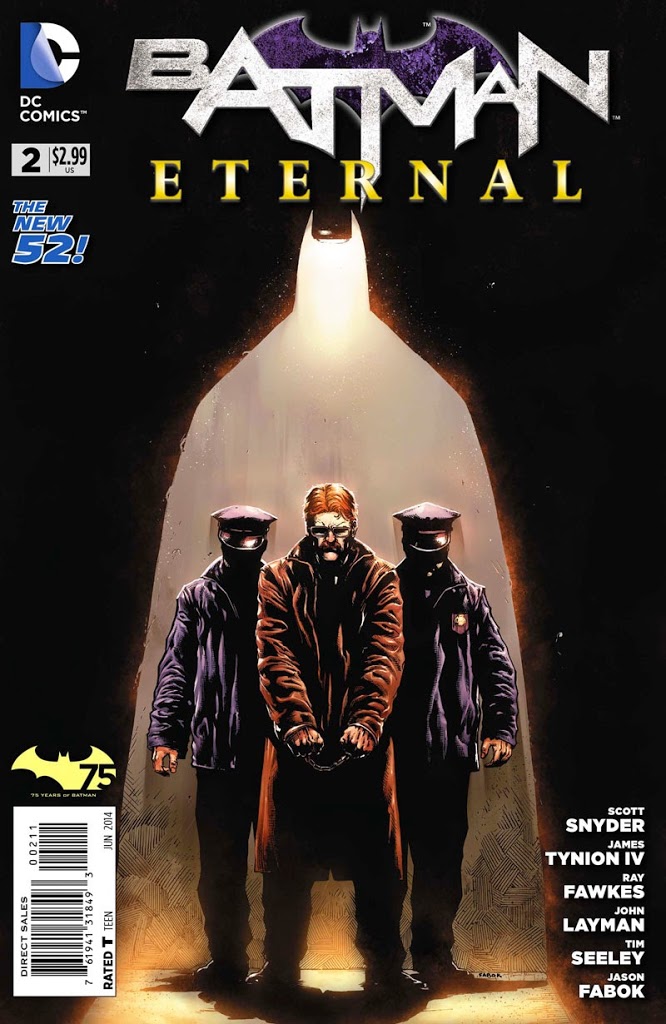 Scott Snyder turns up the suspense in his second outing in Batman Eternal. The reader wants to know who this villain is. He definitely is not an outsider, but a man with deep connections to the political power circles that lead all the way to Mayor Cady’s desk. The need to find out who this man is keeps the reader’s attention while Snyder and Tynion IV continue to bring Gotham to life.
A host of characters are introduced from Vicki Vale breaking the news of Jim Gordon’s arrest in Batman Eternal #1, to Batgirl, Batwoman, Red Robin, and Lucius Fox among others finding out about the horrific train incident. Meanwhile, Batman is on detective duty interrogating Jim Gordon, who is still shaken and perplexed. Jason Fabok puts Gordon’s emotions to ink, showing him beaten down by the number of dead victims dead, but at the same time struggling to comprehend what he saw and what the recording displayed. Gordon looks into his hand visualizing and knowing the gun was in the henchman’s hand.
Snyder and Tynion IV keep the suspense flowing with a heinous monologue by our mysterious villain, who compares Gotham to the Garden of Eden where fruit is ripe for the picking, and a power structure that would test Adam himself let alone the Mayor.
The theme of introducing the cast continues, but instead of the heroes it appears the reader gets a glimpse into the villains. This reviewer was not familiar with either of the two villains introduced, one with a green suit and eyes with skulls for pupils and the other a ghastly being whose name is revealed as he sears the flesh off an inmate in Arkham.
In a novel-like transition, the story returns to Batman and he continues to investigate the subway incident. However, he has company, none other than Catwoman. The sequence calls the book for what it has been so far, tense. Catwoman is able to break the tension in an entertaining scene where she flirts with Batman, who is not having anything to do with her advances!
An interesting note, Fabok seems to have toned down Batman from the previous issue where he was raging on steroids. He is intimidating and solid, but not Hulkish in his features. Catwoman is done to a tee, from the whip around her waist to the goggles on her head; she is both lithe and muscular, what a reader expects out of Catwoman.
Finally, Snyder and Tynion IV reveal the villain they have been building the reader up for the entire time, and it does not disappoint. The war for the soul of Gotham has just begun.