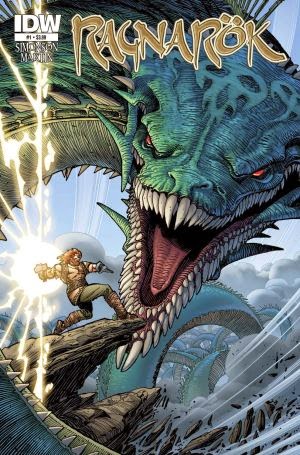 The gods have been slain and the world has been cast asunder. Thor, the mighty son of Odin is defeated by Terminus, the glorious offspring of Earth. This is the world Walter Simonson casts the reader into.
The story follows Brynja, a Black Elf assassin, on her assignment to kill a dead god. Simonson’s first introduction to the character is very intriguing and he switches up gender roles. Brynja is a female assassin, who leaves her husband and young daughter behind to pursue what she hopes will be her last mission securing the future of her family especially her daughter.
The story is familiar to many other hero stories and has many characteristics of Joseph Campbell’s Hero’s Journey. Brynja leaves her family and sets off on a journey. She makes a deal with a villainous character with high reward and high risk upon completion or failure. Her journey requires her to gather mercenaries as she travels across the deserted world to confront and kill a dead god.
There is a reason why the tale of the hero is so popular– it can be extremely enjoyable, and Simonson does an excellent job of doing just that. He also spices it up with a little bit of mystery. The sequence of Brynja accepting her contract is extremely mysterious and adds a level of the unknown to what appears a very straight-forward story. Simonson ups the mystery even more when Brynja’s daughter, Drifa, experiences an all too real nightmare. The only problem is the writing can be a little too in-your-face with quotes like “We are there.” And “I have gold.”
Simonson really shines in developing an immersive world. Although much of it barren, it has areas where the world comes to life. Whether it is in the ruins where Brynja is meeting her mysterious and sinister boss or at Kliffborg, the Fortress at the Edge of the Worlds, there are many places to explore. Simonson’s artwork not only explores geographic expanses but captures the realm of fantasy through the different types of creatures and animals he introduces. Brynja’s mount is the most prominent: a horse with an elongated snout and teeth as sharp as razors. All of these details from the geography to the animals to the characters themselves create a very beautiful fantasy setting.
A fantasy world is not complete without magic, and the panels where Brynja is casting her spells are very intriguing especially since Simonson had the words of the spell outline one of the panels; it is an added touch that heightens the fantastical elements. Laura Martin’s coloring is up to snuff and she shows her ability to contrast timelines allowing the reader to easily transition from the first few pages to the introduction of Brynja and her family.