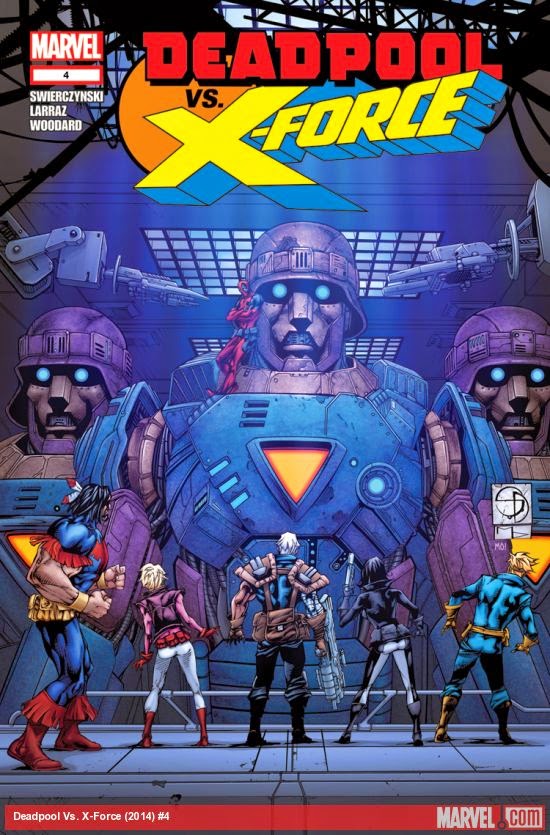 The laughs continue as creative team Duane Swierczynski and Pepe Larraz finish up their four-book miniseries. Deadpool has rescued Adolf Hitler, enemy #1 of time travelers extraordinaire, and is protecting him with an all-new super-gun. The panel describing the gun is hilarious! It is a spoof on television commercials telling you to “Call Now!” Letterer VC’s Joe Sabino uses a bunch of different fonts to conjure up the voice of Billy Mays. And he guarantees “It KILLS them forever!!”
While Deadpool is off erasing wannabe saviors of World War II, Cable and the X-Force are busy cleaning up the mess Deadpool left behind during the Revolutionary and Civil Wars. It all seems too easy for the X-force. Cable uses his telekinetic powers to give the British back the tactical advantage. All seems as if they have triumphed, but Deadpool and Talbot have other ideas!
Pepe Larraz creates a warped world where the Nazi’s have won with the use of powerful Panzer-Sentinels decked out in a new flag combining the Nazi swastika with blue and red stripes, a warped version of the American flag. The Panzer-Sentinels are fearsome to behold with skulls for faces and large eyes; a true terror that has even Cable scared. Colorist Nolan Woodard adds to the fear by giving the Sentinels’ skull faces a pinkish color with green glowing eyes. Larraz and Woodard not only create fear with their Panzer-Sentinels, but they also add amusement on the very next page with a young Adolf Hitler throwing a temper tantrum. Adolf’s hair covering his right eye with his feet flailing in the air is downright comical. One of the most villainous human beings to walk the earth has been reduced to a mere child crying out for attention.
The action sequences are also wonderful to look at. Deadpool begins unleashing his Time Gun MachineTM vaporizing a woman and her parents. Her parents are blasted into skeletal form as their skin and bones begin disintegrating into the wind. Warpath rips an eye out of one of the Panzer-Sentinels and the mechanical and electrical parts come spilling forth. Woodard highlights the electrical wire giving it a bright white color, contrasting it against the looming shadow of the Sentinel. The panel highlights the combination of Larraz’s artwork with Woodard’s colors. However, there are some minor hiccups. For example, in the following panel Warpath appears to have five flailing appendages as he is thrown to the side.
Swierczynski ends the story beautifully keeping the humor alive and paying tribute to Deadpool’s first ever appearance in New Mutants #98. However, Swierczynski relies a little too much on Cable’s telekinetic abilities to bring the story to a close.