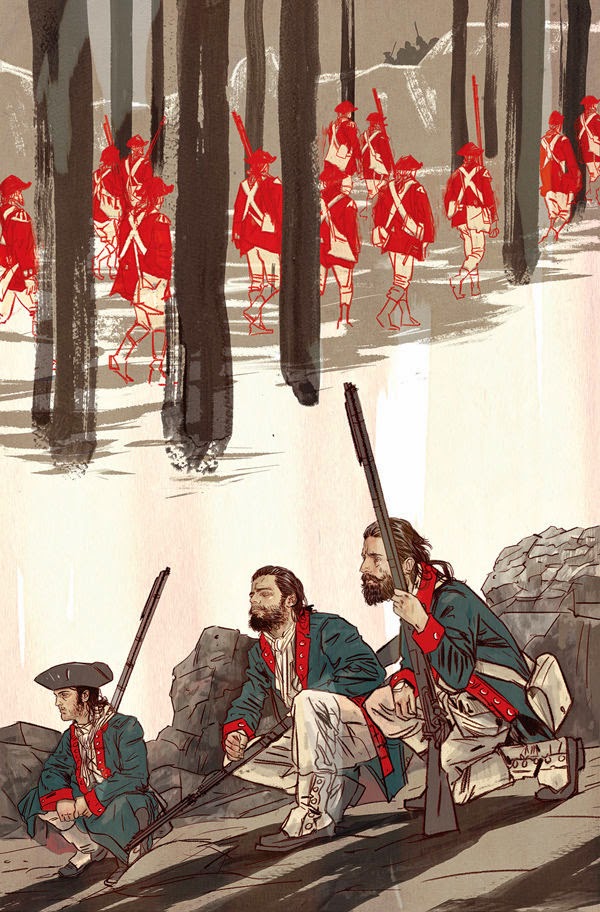 A young New Hampshire boy comes of age during the Revolutionary War. Is it good?
This is the premise of Rebels #1 written by Brian Wood with artwork by Andrea Mutti. The story follows a young man by the name of Seth Abbott as he is taught the ways of a woodsman and hunter by his father and later details one of his first major encounters with British Redcoats that sets him on a path with a famous Virginian general.
The beginning of the story has a pretty good hook detailing a hard-working childhood with a stoic and reserved father figure that quickly transitions into a teaching sequence filled with suspense. However, the story quickly becomes filled with exposition once it transitions to an older albeit still young Seth Abbott. There are entire pages detailing everything from character and geographical descriptions to historical context and information about the setting and a lot of it is pure overkill. Wood doesn’t need to tell us Ezekiel Learned is like a brother to Seth. him; he should allow the artist, or at least the story he is telling us, show it. Let’s see them act like brothers with each other in both their actions and their words. This is just one example that happens repeatedly throughout the book.
Continue reading at Adventures in Poor Taste!