The United States has been attacked by a terrorist. The White House is in flames and smoke is billowing from its crevices. Images of 9-11 flash before your eyes as you remember being glued to your TV trying to figure out what just happened.

This is abhorrent. There is no discussion about who perpetrated the attack let alone a decision by the United States Congress declaring war. It is a pure knee-jerk military reaction that results in the slaughter of millions.

After the initial attack, the book jumps forward twelve years. The United States is still in Canada with an occupying force of advanced robots. A survivor of the original attack on Ottawa is hunting for food when she is spotted by one of the many American robotic dog patrols. The dog informs her she is not authorized to be where she is. This is a clear example of an occupying force putting curfews in place and limiting free travel. The scene reminds me of East Berlin during the Cold War.

The Soviets constructed a massive wall and placed machine guns in towers throughout its length. They did this to ensure citizens could not escape into West Berlin. They wanted to control the movement of citizens and let them know who was in charge. The same is being done in [easyazon_link identifier=”B00ZAC8FIW” locale=”US” tag=”bounintocomi-20″]We Stand On Guard[/easyazon_link].

The most libertarian aspect of the book is when Amber, our protagonist, runs into a group of Canadian freedom fighters. They describe the entire war as based on resource control, specifically water. Sounds like a familiar war the United States waged in Iraq. 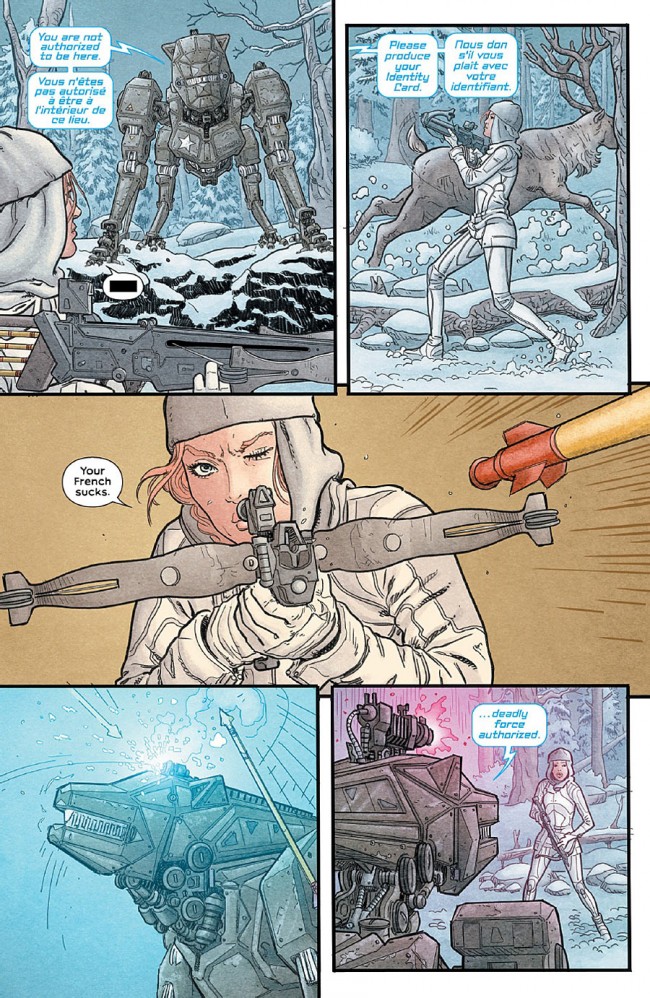 Brian K. Vaughan also describes who these freedom fighters are. Much like the heroes of the Revolutionary War, they are everyday civilians. One was a famous actor, another was an industrial engineer and they have come together to defend their land against an invasive and tyrannical opponent. They are willing to sacrifice their lives to protect their land and secure their freedom. It is inspiring.

Despite this inspiration, the freedom fighters are not perfect. Towards the end of the issue, the book puts the freedom fighters in a tough spot with a huge moral dilemma. An American soldier kills one of the fighters. He then surrenders. The group is faced with either executing him or torturing him. They don’t discuss any other options. The result is Amber executes the American.

There is a big problem with this situation: an execution without a trial. The group makes a rash decision in the heat of the moment. They are not able to rationally try the man and determine his guilt.

However, the actual action of executing him is in line with libertarian thinking. Economist Walter Block argues for the death penalty, “We have seen that in the libertarian philosophy, the death penalty is justified for those whose crimes rise to a sufficient degree of severity. Surely, there are heads of state whose evil deeds many times eclipse such a level. Thus, it would altogether be justified to end their lives by violence.” Though this soldier might not be a head of state, he is part of the military and is actively engaged in the use of force (he did just kill one of the Canadian freedom fighters). His crimes could result in death through retributive justice as well.

How Libertarian Is It?

[easyazon_link identifier=”B00ZAC8FIW” locale=”US” tag=”bounintocomi-20″]We Stand on Guard #1[/easyazon_link] stands out as an excellent piece of libertarianism. It depicts the horrors of an overaggressive government gone wrong. It shows the loss of life and complete destruction of a bustling city. It provides a critique on the folly that is the Iraq War. It portrays the evil of registration systems and curfews. It also describes how far people will go to fight for their freedom. People will sacrifice their lives in order to be free. There is one area where it does take a minor misstep. The freedom fighters hastily execute a captured soldier. While the execution can be debated in libertarian circles, it is my opinion that the death penalty is a valid sentence. However, they did not attempt to try the man for his crimes nor discuss alternative sentencing outside of execution and torture.