After discovering the Emperor’s lies regarding Padme’s death and uncovering the knowledge that his son destroyed the Death Star, Darth Vader begins the dirty work of bringing to heel the Son-tuul Pride, a Rodian led smuggling ring, to curry favor with the Hutts. Could Vader have an ulterior motive for taking down the Son-tuul Pride?

[easyazon_link identifier=”B00YFWK1VM” locale=”US” tag=”bounintocomi-20″]Darth Vader #7[/easyazon_link] begins with Vader retracing Luke’s travels on Tattoine during [easyazon_link identifier=”0345341465″ locale=”US” tag=”bounintocomi-20″]Star Wars Episode IV: A New Hope[/easyazon_link]. It is unclear as to the purpose of the journey and Aphra even questions Vader, “What are we looking for?” After six pages, it is still unclear what Vader is looking for. He does come to the conclusion that Luke is strong with the Force, but lacks training. I guess he hadn’t realized that after combating him on Cymoon 1 or when he was hunting him down during the Battle of Yavin.

There also seems to be a continuity error when Aphra makes note of Imperial activity on Tattoine, “Your lot were acting covertly here? Still a little twitchy when the Senate was just fresh in the ground?” It has been twenty years since the Galactic Senate was dissolved. However, she could be referencing the Imperial Senate which would not have been dissolved when the stormtroopers were on Tattoine. Either way it appears to be a mistake.

After these first six pages, the pace of the story really begins to pick up. Writer Kieron Gillen introduces us to the planet Son-tuul in The Outer Rim. It is a planet run by the ruthless Son-tuul Pride. They do not accept failure and keep a safe full of the heads of those who have failed. The leader even uses the heads as treats for his caged rhinoceros-like beast.

The setting is fantastic for a Vader-led assault on the Son-tuul Pride. Salvador Larroca uses some inspired artwork as Vader makes his entrance. It is eerily similar to a political spoof of Barack Obama with the rays firing above his ahead. Larroca transforms the rays into stormtrooper laser blasts streaking above Vader as he charges into the compound. There is a hilarious use of Vader’s Force power that had me whispering to myself, “Oh, shit!” 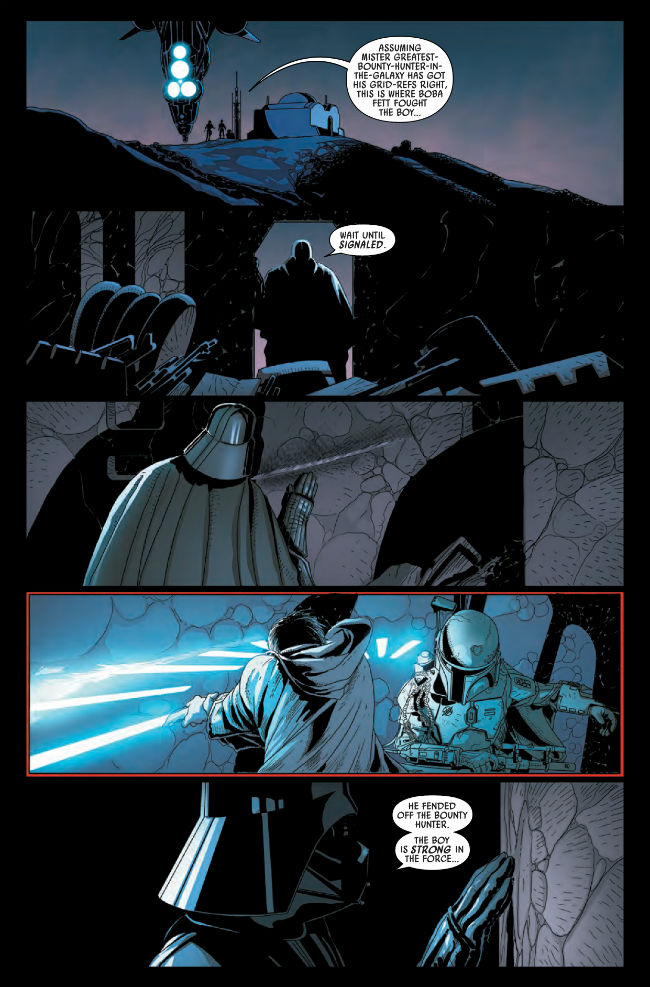 One of the aspects of Larroca’s artwork is the return to form of the original trilogy style of lightsaber fighting. When Vader is wielding his lightsaber, his strikes are deliberate and he doesn’t use fancy acrobatics that have him leaping across the page. This old-school style creates a lot more tension in the fight scenes and makes them much more enjoyable.

After the entertaining fight sequence, Gillen captures the tone and personality we have come to expect of Vader when negotiating with individuals he deems inferior. He is terse, to the point, and makes sure they know to never cross him.

Aside from the battle sequence, the most intriguing aspect of this issue is the introduction of a potential conspiracy against Vader (although I believe it is all part of Vader’s plan). Aphra meets up with long-time Star Wars bounty hunter Bossk and introduces us to three new bounty hunters: IG-90, an assassination droid; Black Krrsantan, a Wookiee; and Beebox, a short humanoid decked out in full Mandalorian gear. She tasks the four with a mission that could be considered an act of treason against the Empire itself!

Larroca’s choice of camera angles is interesting during the bounty hunter sequence. The proportions of the characters are constantly changing depending on the angle and it is hard to get a grasp on their actual height and girth. In one panel he depicts Krrsantan dueling in the ring. He chooses a camera angle from the position of a box seat. The angle gives one the impression Krrsantan’s legs are miniature. However, just two panels later he uses a camera angle looking up at Krrsantan as he raises a fist in victory over his fallen foe. In this panel Krrsantan’s legs appear to be in proportion to the rest of his body.

[easyazon_link identifier=”B00YFWK1VM” locale=”US” tag=”bounintocomi-20″]Darth Vader #7[/easyazon_link] starts off quite slow and the first six pages seem to have no clear purpose other than to reinforce Luke’s strength with the Force. However, the book takes off and becomes quite enjoyable with a raid on a smuggler’s den and then the introduction of the bounty hunters and the conspiracy against the Empire. Larroca’s artwork has some “spit your drink” moments and highlights the old-school lightsaber fighting techniques. However, he struggles with body proportions.