Jim Gordon continues to don the Batsuit as he is faced with an internal dilemma and a super-powered gang leader. Will he be able to confront both and if so how will he do it?

Scott Snyder and Greg Capullo are completely self-aware in [easyazon_link identifier=”B00ZK4D256″ locale=”US” tag=”bounintocomi-20″]Batman#42[/easyazon_link] as they start off the issue with an action figure fight between the new Batsuit and the old Batman to determine which is the real Batman. It can definitely feel like a slap in the face to some readers, but to me it just felt unnecessary and was there just to make a statement. It didn’t really add any value to the story.

The story itself is very hard to follow. It jumps around quite a bit and I found myself flipping to the previous pages quite a bit to check and see if I skipped a page. It didn’t flow very well at all. Case in point, Gordon in his Batsuit is deployed on a mission just after revealing the new Bat-Truck (Yea it is literally Optimus Prime as the Batmobile). You expect Gordon to be in control trucking down the road to confront this new threat, that’s not the case at all. However, we end up getting a long-winded explanation about some kind of “Bat App” that alerts the police that the Batsuit may be in danger.

Snyder eventually gets into Gordon’s internal dilemma as he sits perched above the city (not sure why, he’s got a bad guy to beat) pondering whether or not he can live up to the symbol of Batman. It is an interesting internal thought process as he debates whether or not the system he is fighting for is worth it. 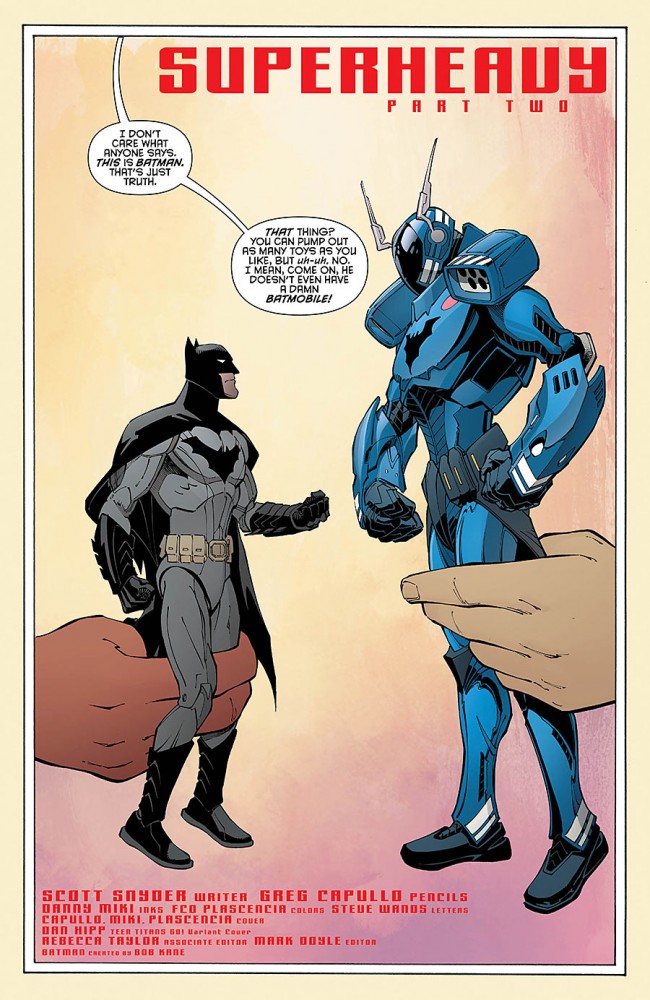 Capullo’s action sequences are exciting. He does a fantastic job revealing the villain. He poses him not only within the panel, but also within a circle of his own power. The mass of bricks and debris encircling him focus your eyes on the villain. It gives off a sense of power as well. This guy is no pushover.

There is an excellent splash page where Capullo brings to life Gordon’s previous thoughts about the city suffering. The fact that the villain’s power is to manipulate building materials further enforces the idea of the hurting, unprotected city. He takes on the form of a twisted, monstrous version of Batman.

After the initial fight sequence there is another poor transition. It appears we are taken back in the past where Gordon is doing some detective work to determine the deaths of four victims. The revelation that his current opponent is part of an on-going investigation puts a huge damper on the beginning of the story when Gordon is just called into action. The character reactions just don’t make sense.

One of the biggest disappointments in this issue is the Bat-Truck. Snyder builds it up calling it a “rolling cave” that costs over $15 million. I want to know what’s inside and what kind of gadgets it is equipped with. Unfortunately, I most likely won’t get to find out because after the big reveal, they decide on scrapping it before it even got going. 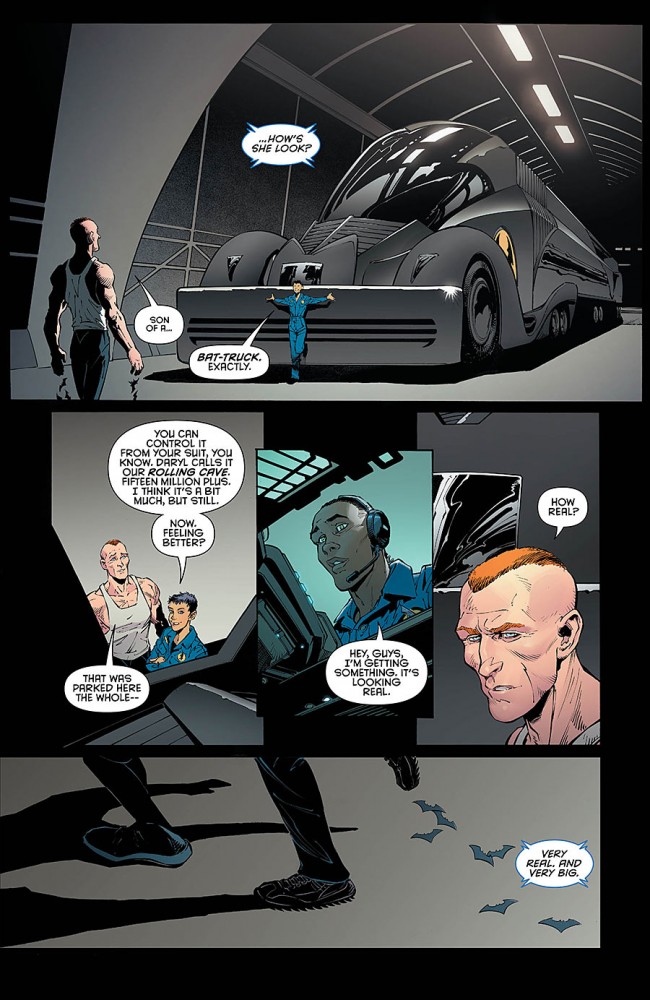 [easyazon_link identifier=”B00ZK4D256″ locale=”US” tag=”bounintocomi-20″]Batman #42[/easyazon_link] jumps around between story points a lot and most of the time they don’t flow together at all. Snyder also uses a ton of exposition to explain the “Bat-App” or why certain individuals now have super powers. The self-awareness was a little much and got old pretty quick, “Bat-Stache Away” should never be seen again. There were some bright spots. I enjoyed the three little pig’s reference and Gordon’s internal struggle on whether or not tying Batman to the government is a good idea.

Capullo’s artwork was good. I enjoyed how he was able to bring Snyder’s discussion of the hurting city to life with the villain’s superpowers and how he reflected a monstrous version of Batman. Danny Miki did an absolute fabulous job with the inking really highlighting the separate pieces of construction material fueling the villain’s power.

Looking for a second point of view? Check out Jordan Richards review over at Adventures in Poor Taste!