Cloud City is a distant dream as [easyazon_link identifier=”B00ZA69334″ locale=”US” tag=”bounintocomi-20″]Lando[/easyazon_link] and his partner Lobot wade through the galactic underground and happen upon the heist of a galaxy. Will they succeed?

The first page is just fantastic and sets the tone for the rest of this book. Alex Maleev perfectly captures Billy Dee Williams’ smile and you just know he is up to his wily ways.

In [easyazon_link identifier=”B0006VIXGQ” locale=”US” tag=”bounintocomi-20″]Star Wars Episode V: The Empire Strikes Back[/easyazon_link] Han Solo refers to Lando as “old smoothie”. He definitely earns that description in the first scene of Lando. Charles Soule uses excellent dialogue to portray Lando’s most distinguishing trait, his ability to persuade. He strategically maneuvers an Imperial Moff to give him what he wants for free. He identifies how Moff Ssaria wants to see herself and uses his gift of gab to make her believe it.

This skill is on display throughout the comic, but my favorite is when Lando is confronted by a creditor who decides to renege on their deal. Maleev expertly shows Calrissian’s brief moment of outrage, but he is able to quickly and calmly compose himself and begin to work the apparent disadvantage into his own advantage. It is brilliant.

Not only is Soule able to adeptly characterize Lando he does an even better job of using Lobot as a foil. Lobot is the conservative, risk-averse, and rational one. He looks at the immediate picture. Lobot’s characteristics highlight Lando’s larger strategic thinking and his risk-taking nature. The back and forth dialogue between the two is a delight to read and shows the strong friendship and trust they have for each other. 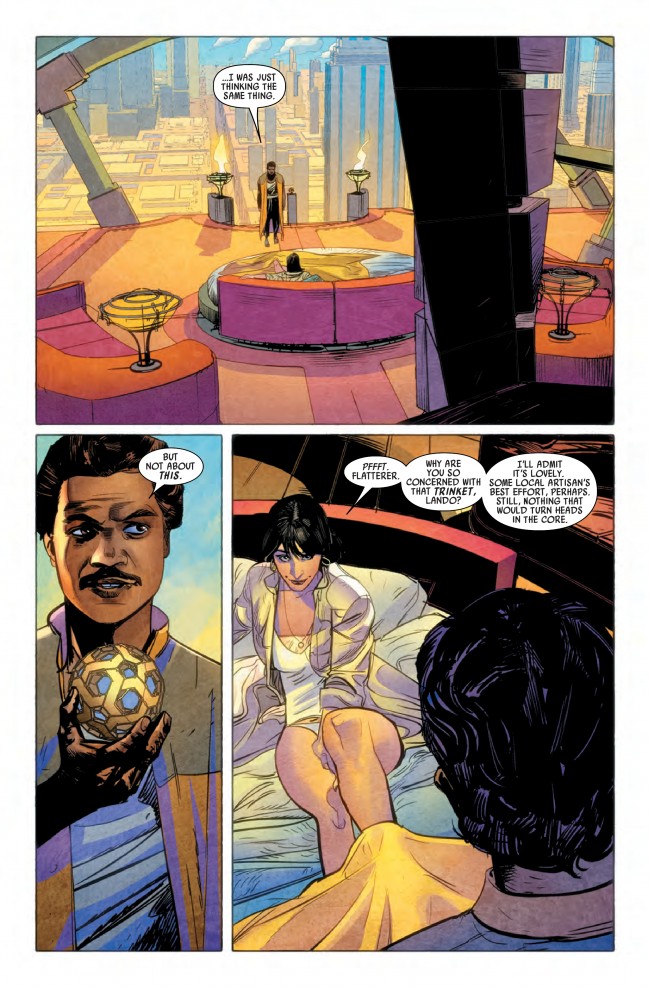 Soule’s writing also reflects one of the best attributes the original trilogy had: a rich history. Leia’s message to Obi-Wan Kenobi hints of a massive war called the Clone Wars. Soule uses a similar technique in [easyazon_link identifier=”B00ZA69334″ locale=”US” tag=”bounintocomi-20″]Lando[/easyazon_link]. The most prominent display is when Lando is recruiting Korin Pers for a mission. It is revealed he was a Sava. It is unclear what a Sava is but hints at a person with great knowledge on antiquities, possibly a subject matter expert. Small mysteries like this one are just the small touches Soule uses to create a wonderful and intriguing story.

My one complaint is the actual heist is shortened to just one side to side spread with only five panels. Due to the shortened nature of the heist and the primary image being a space station, Maleev uses two camera angles from far away and he puts the characters in the same exact suits so it is impossible to tell who is who.

Paul Mounts does an excellent job with the coloring. He uses the right colors in the background to not only highlight emotions, but they also are a steady reminder of the vibrancy of the Star Wars universe. When Lando is under duress by his creditor, Mounts uses a number of oranges and reds to emphasize the tension. During his time with the Moff, Mounts uses yellow backgrounds. It stresses Lando’s nonchalant attitude towards the danger of the situation. 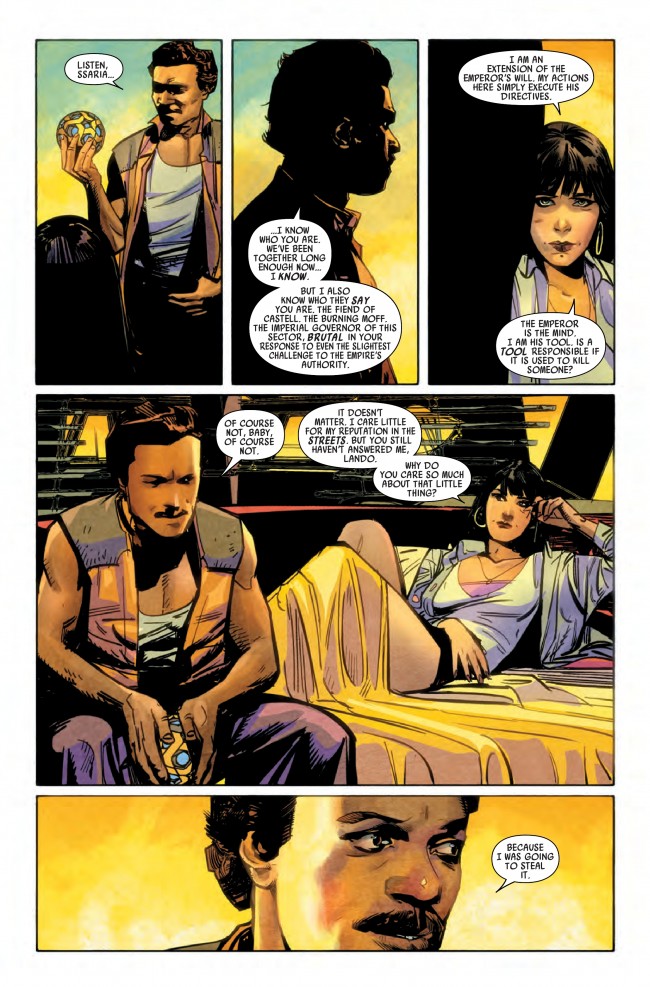 [easyazon_link identifier=”B00ZA69334″ locale=”US” tag=”bounintocomi-20″]Lando[/easyazon_link] is an absolute blast to read! This book makes me want to be Lando. Soule expertly captures his personality while Maleev nails his body language and facial expressions. The dialogue between Lando and Lobot is wonderful and I look forward to the two playing off each other in the upcoming issues. There was even a small nod comparing Lando and Solo as Lando echoes Han’s comments about knowing the odds. My only wish would be for a more drawn out heist scene. There was plenty of build-up to it but the actual action was condensed. One thing is for sure, Lando has gotten himself into trouble he doesn’t even know is coming.

Looking for a second point of view? Check out Dave Brooke’s review over at Adventures in Poor Taste!