Issue five is a major departure from the very funny, charming, high stakes tone of the last issue. Instead, it tries to ask the question: What makes Squirrel Girl…Squirrel Girl?

It all happens when Nancy Whitehead (Squirrel Girl’s roommate in case you forgot) gets trapped with a bunch of strangers in the Statue of Liberty while Mystero…I’m sorry I mean Mysterion wrecks havoc through some sort of holograms attacking Liberty Island.

While Nancy and the other folks are in there they all decide to speculate on who’d save them. Will it be Thor with her amazing abs? How about Tony Stark with the armor practically painted on and…less abs? But apparently he modeled the suit abs after his real abs so…? 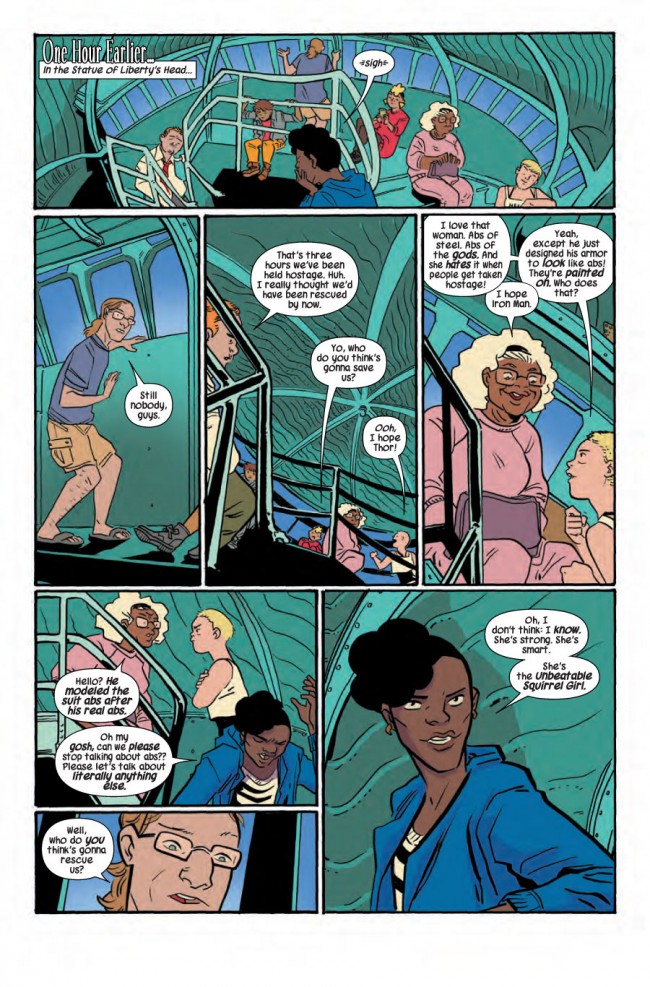 Anyways, after telling them to shut up about abs and literally talk about anything else, Nancy decides to inform everyone that [easyazon_link identifier=”B00W03IKU2″ locale=”US” tag=”bounintocomi-20″]The Unbeatable Squirrel Girl[/easyazon_link] will be the one to save them.

…Upon which everyone has a collective Star-Lord moment and wonders who the hell Nancy is talking about.

But an Old Lady knows! And a Suave White Guy (SWG) knows! And a Little Kid Who Read Stuff on the Internet knows!

And…well you get the point.

Basically the “Tails of Squirrel Girl” issue is just that. The issue amounts to a bunch of people who don’t really know who Squirrel Girl is try to make up stories about who she might be.

But as Nancy points out towards the end that Squirrel Girl is more than the sum of these parts.

The storylines often involve a grain of truth mixed in with wishful thinking, pure speculation and imagination.

So what you’d find on your usual news station, basically.

I’ll say that the Old Lady’s story annoyed me on a political level. It revolves around Doreen teaming up with Captain America and a seeming talking fish head named “Bass Lass” brainwashing him into hating democracy. And apparently the only alternative to that is…fascism? Monarchy? I mean, I get who brainwashed Doreen within the story (which isn’t actually Bass Lass) so I guess it makes sense. But it just seemed too ham-fisted. Like, am I supposed to choose democracy over fascism and then that’s it? No other options?

Sorry, I’m a bit biased as an anarchist I guess. 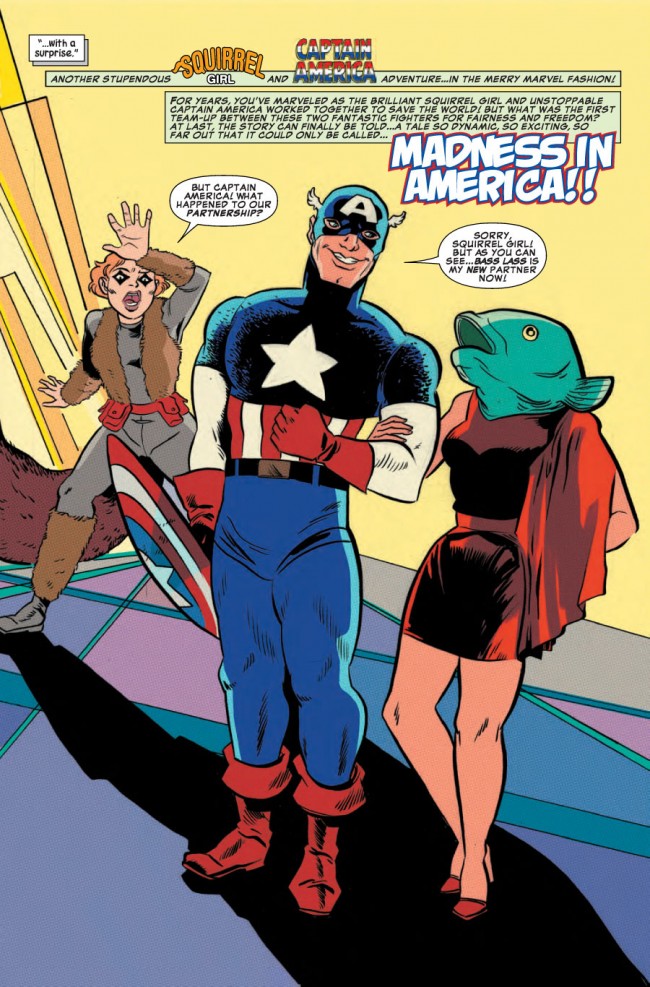 Still, most of the stories are funny and drive home important points about Squirrel Girl’s character. Sure she’s unbeatable but she’s not a time traveler (not yet, anyhow!) and she might satirically have things in common with other superheroes but she isn’t exactly them.

Squirrel Girl has her own sense of unique comedy that makes her stand out. She’s upbeat, sweet and very corny and silly and loves every minute of it. She’s exactly the sort of reaction I think we need to comics sometimes feeling like they need to be gritty and dark.

And look, I love Batman. He’s my second favorite superhero (even though I don’t think he’s a very good one) but I have trouble dealing with people who just blandly imitate his style with no real thought. That’s what led to a lot of the “gritty realism” in the 90s and even today with DC in the movies. I feel like Squirrel Girl and characters like her are a great reaction to these sorts of trends.

Recently, I tried to convince one of my friends that Squirrel Girl was awesome. I’ve batted pretty well both online and off so I was hopeful. Adding to that was that this was the first time I’d be talking about it offline to someone who is really into comics. So I was hopeful that it’d go well. But when I talked about one of Squirrel Girl’s “things” was beating much stronger opponents than her he was basically like, “well that just sounds like every other story to me. ‘Will Squirrel Girl defeat the bad guy?!’ and then of course she does!’ But what does she actually have to do with Squirrels anyways?”

I think part of my problem was that I got too attached to one aspect of her and over-emphasized it instead of trying to more comprehensively explain her character. I just homed in to a consistent trend within her publication history that I thought would be interesting. But sometimes people can miss the tree for the forest and perhaps my explanation didn’t help that.

When trying to get someone into something you like you can’t just think about what you find most interesting. That’s important as well for sure and probably shouldn’t be left out. But you might not want it as your centerpiece either. The guy I was talking to, for example, is really into sci-fi. Maybe if I had explained it to him in more sci-fi terms it would’ve gone better. For example, had I mentioned or focused rather heavily on the Galactus threads in Squirrel Girl, I might have been more able to effectively convince him.

Then again, as someone else told me, “You were blinded by your love of Squirrel Girl.”

To which I responded, “Yeah but how could I be blinded to begin with if it wasn’t so awesome?”

The artwork is much the same as before. There’s fewer huge characters to deal with and there’s some sporadic fun stuff going on in the background at times. So as usual this issue has some re-reading value (I think this was my third re-read!).

The stories from the different characters are, for the most part, fun and inventive. And they serve a pretty crucial function while still doing it in a fun way. Though it seems like a bit of a jolt to go from such high stakes (even if it was being handled so casually) to such minimal and personal circumstances. That said, this issue was probably pretty necessary in some sense. Especially for new readers who aren’t quite sure how one should go about talking about Squirrel Girl.

Nancy is actually really the star of this issue and is used to great effect. I really love Nancy’s character so I honestly didn’t mind having Doreen taking a backseat for once. Not to worry though, there’s still a good amount of Doreen towards the end!
The flavor text at the bottom of the comic is still fairly satisfying and worth checking out for sure. Probably more than once, really.

I guess though, upon further review (get it?) I’d have to say that I don’t find Nancy’s conclusion very satisfying.

Okay, so Squirrel Girl isn’t obsessed with vengeance and she doesn’t pal with Cap “on the regular” as Nancy put it. And sure, she’s not from the future. But okay, when then? Where do we go from there? That she’s not the sum of her parts…but those parts mentioned are still important parts nonetheless?

I guess that’s true but it just don’t strike me as a very satisfying way to conclude this (very silly) investigation of what makes Squirrel Girl…Squirrel Girl.

So although I still really like this issue I’m not convinced it actually accomplished what it set out to do.