[easyazon_link identifier=”B00YUOWPFU” locale=”US” tag=”bounintocomi-20″]Star Wars #7[/easyazon_link]starts off a new arc leaving behind the escapades of Luke, Leia, Han, Chewie, R2, and C-3PO to focus on the exile of Obi-Wan Kenobi and his life on Tattoine after the execution of Order 66. How does Ben Kenobi deal with exile and the outlaw of the Jedi Order?

[easyazon_link identifier=”B00YUOWPFU” locale=”US” tag=”bounintocomi-20″]Star Wars #7[/easyazon_link] does not capture all of Obi Wan’s time on Tattoine, but focuses on one specific point during the Great Drought where even moisture farmers were struggling to stay alive. The story revolves around Obi-Wan attempting to maintain a low profile and resisting the urge to help people who have fallen on tough times. Jabba the Hutt’s ruthless tax collectors have only exacerbated the problem. When Obi-Wan isn’t resisting the urge to help people, he struggles with finding things to do.

This is an unfortunate story to tell because Obi-Wan finds himself bored and looking for things to do (you might be thinking the same thing as you read this issue). It also takes away a lot of the mystery surrounding the character and his time on Tattoine. It devalues Owen Lars’ reference to him, “That wizard is just a crazy old man.” Instead of him being a wizard and a crazy old man, we find out he is depressed and sits around in his hut all day. He isn’t even attempting to communicate with Qui-Gon Jinn, a mission he was tasked with doing by Yoda! It is really hard to make the leap from a confident Master Jedi with full faith in the Force to a depressed exile back to a wise Master Jedi confident in the Force. I don’t buy it and don’t believe Obi-Wan would be faced with depression and looking for a purpose. 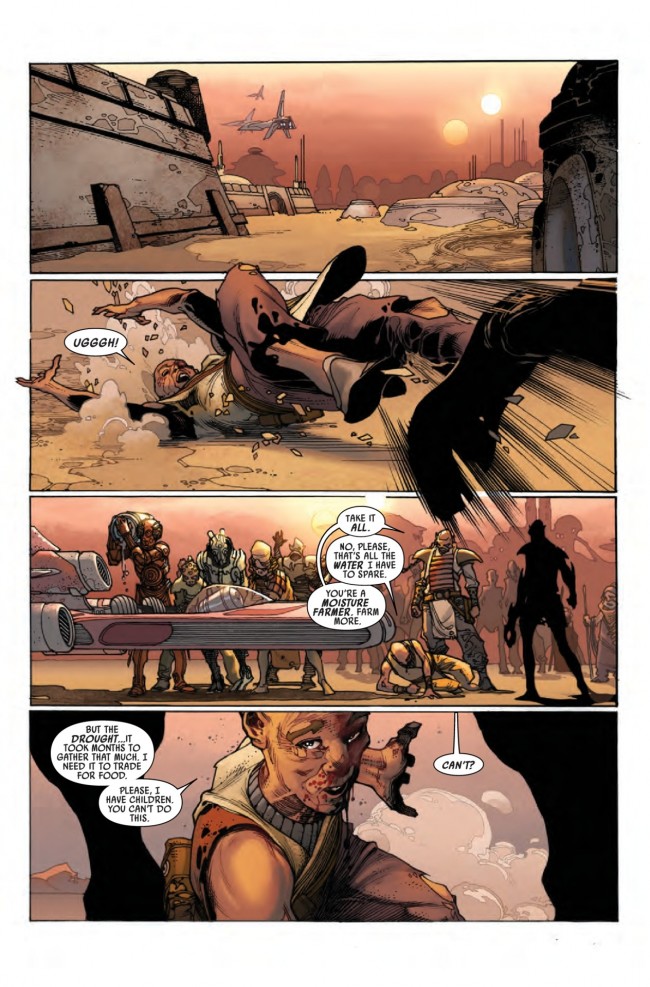 Jason Aaron did craft an interesting action sequence displaying Obi-Wan’s mastery of the Force; however, the dialogue during this scene was a little cheesy and reminiscent of slasher film victims right before they are going to be offed. There were some other mistakes in the dialogue such as Obi-Wan referring to himself as the last of his order when he knows Yoda is still alive.

If you thought the script and writing struggled in this issue, the art was mediocre as well. Simone Bianchi’s pencils, especially his depiction of characters that appear a good distance from the camera, look like they were hit with a frying pan and flattened out. Their faces are extremely distorted and most of their features are eliminated. In many panels the characters blend into the background or the buildings and vehicles they are in.

Bianchi does a much better job at the close-ups. There is a great deal more detail and you can see the emotion in the characters’ faces. The main action sequence is also quite enjoyable, displaying multiple uses of the Force and capturing the essence of sequential art. 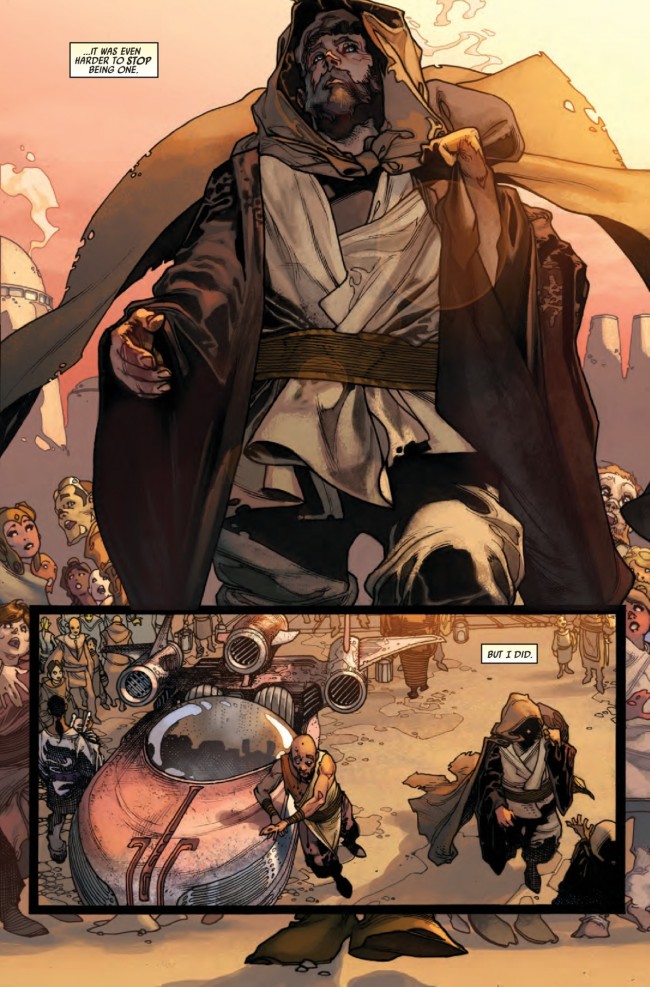 [easyazon_link identifier=”B00YUOWPFU” locale=”US” tag=”bounintocomi-20″]Star Wars #7[/easyazon_link] was a poor showing for one of its most iconic characters. Obi-Wan Kenobi is portrayed as weak and depressed, struggling to find himself as he adapts to exile. The characterization really irks me and doesn’t seem to fit into anything we know about Kenobi from the original to the prequels to the cartoons. Due to this characterization, the writing is very slow and at points boring because Aaron writes from Kenobi’s depressed point of view via journal entries.

The artwork was a struggle as well especially with characters from a distance. They lacked detail and definition and blended in with their surroundings. This may be a coloring problem or a pencil problem; it is hard to tell without seeing the original pencils. However, there were some very powerful close-up shots of Luke and Obi-Wan that really captured their emotions, especially a full-pager of Obi-Wan as he snaps out of his depressed funk.

Be sure to check out David Brooke’s review on Adventures in Poor Taste! for a second opinion.