That’s because it’s all relative and it’s debatable how much of a “return to form” it is to go from “better than great” to “amazing after only being ‘better than great’ that one time”.

Nonetheless, issue six is in some sense better than its previous issue. It concludes on a fairly major note, has a very satisfying introduction, middle and only a slightly lackluster (by comparison) third part.

But enough tap dancing around the issues; let’s break this one down a bit:

Talking hippos, superheroes that can talk to fish and make awesome puns, Nancy screaming at lions and lastly, a squirrel that Squirrel Girl doesn’t trust!

We start off with Nancy and Doreen having an amusing conversation about the squirrel suit that was used back in issue three. If you’re unfamiliar (or if I forgot to mention it because I’m Totally Professional Like That) it’s basically someone enclosing herself with squirrels as some sort of armor.

But Nancy raises a pertinent question, what if she’s punching squirrels to punch at bad guys?

Doreen, of course, recoils at this suggestion and figures there must be a different way that makes it operate.

Luckily a better way is theorized by Nancy and then confirmed by Tippy-Toe but it’s too good to spoil.

Instead, I’ll spoil one of my favorite scenes in not only this book but perhaps the series. Honestly, if this wasn’t included in the issue I might not be as fond about it as I am. But it is so I am.

Anyways, the scene in question concerns a super villain named Hippo the Hippo (because of course) who has been forced to evolve into an “adult quasi-human” at some point. And so now he’s decided to steal from the bank that Nancy and Squirrel Girl are protecting.

But even with the help of some New Friends (you can pick two out of the fifteen on the cover but the answer will still be inside) Hippo still seems like he’s not going to be easy to take down.

So, much like with Kraven, Squirrel Girl manages to figure out a way to stop Hippo without actually having to fight him. It’s pretty ingenious and addresses a real problem that seems to come from villainy whether real or imagined: The costs of life.

I’ll bring up Batman again just to highlight this point.

Batman seems to think that beating up villains is going to solve Gotham’s problems. But how many times has Wayne Enterprises thrown money at the city and very little has actually changed? How many times has Batman put Joker in Arkham only for him to get out within a few months and start killing again?

The point is, these methods of “solving” crime are hardly long-lasting and effective but Squirrel Girl’s actually are. Batman’s methods tend to build up resentment and loathing within these villains. But Squirrel Girl tends to develop some sort of meaningful relationship with those she fights.

Squirrel Girl has made Kraven able to fulfill his goals in a much more challenging way. She’s made good friends with Galactus and given him a much longer-lasting planet to munch on from time to time. In this issue she helps (or tries to help) Hippo find a job with a demolition company (which should totally be called, “What’s Up, We Hate Buildings Too” as the flavor text suggests). She’s doing all of these things not out of some misguided notion of “vengeance” but out of real love and joy for what she does.

And sure, she hasn’t done this all of the time. Whiplash may come back…after he’s recovered from his now pretty likely fear of squirrels. And maybe those bank robbers will get out of jail-once they discover how out of fashion domino masks are.

But on the whole, Squirrel Girl has done a lot more to fight crime than I think Batman on average does.

I think what she does here is actually seeing a bigger picture that involves peoples aspirations, motives and so on. Batman doesn’t get that. He doesn’t really do empathy a lot of the time. He just sees these people who he needs to stop because his parents need to be constantly avenged.

But in the end, all this seems to do is hurt himself, those around him, and of course, it damages Gotham more than it helps.

As one of my favorite characters Anarky said about Batman, “He fights the results of crime, but not the causes. He takes on individuals cases … but he fails to see the bigger picture!” 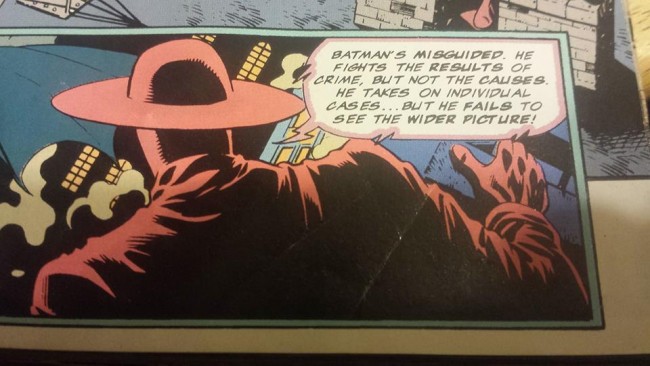 And that’s why; Squirrel Girl is a real superhero.

The visual style, the Twitter introduction to what happened in the last issue and the flavor text remain as solid as ever…for the most part.

Henderson still seems to be having trouble keeping a consistent art style when she draws much bigger things. And as usual the (if you’ll excuse the pun) draw distance of characters makes it seem not as striking as they do up close. I’m not sure why Marvel editors keep having artists go with this style (or is this just a thing that’s been around and I didn’t know?) but it’s a little distracting here and there.

Overall though this issue is very wildly funny and I haven’t even mentioned the squirrel that even Squirrel Girl won’t trust. It’s a cute concept as is the one that comes before it involving Nancy and a zoo. But it feels wildly overpowered by the first part of the comic because it just works so well and hits all the right spots in the best of ways.

Still, there isn’t much to really complain about in this issue. I can’t say the concept in the third part is bad. It just doesn’t compare well to the other things in the book. It’s a clear case of (perhaps) misplaced jealousy and some genuine suspicion about something that may or may not be going on.

Also, the narrator gives up towards the end, which was pretty funny.

Plus the city is on fire.

And that seemed kind of important too, I guess.