As far as a crossover goes, writer Mark Rahner hits all the notes you would expect in the second issue of [easyazon_link identifier=”B013PUME2I” locale=”US” tag=”bounintocomi-20″]Vampirella / Army of Darkness[/easyazon_link]. Ash says one-line wisecracks, something-something deadites, and Vampirella runs around without much clothing on.

And that’s really about it. It’s too bad, because Vampirella, out of all the other Army of Darkness crossovers Dynamite is putting out these days, has a lot of potential. Sure, the others are pretty outlandish by comparison, and outlandishness works well for something like this. But Vampirella feels like she really could be a character in an Evil Dead movie.

The first thing a reader sees when picking this issue up is the terribly disappointing cover. Vampirella stands ready to rip Ash a new one, meanwhile he stares back at the reader. Above his head is a fourth-wall breaking one liner, and not even a funny one.

For some reason, every panel on the next three pages that features Vampirella uses roughly the same shade of red she is inked in for the background as well. So while at first everything in the castle is dark-red, as soon as she is taken out of the panels they are back to a more typical gray-blue.

I get that this is a comic-book about a weird vampire lady and a guy with a medieval-robot hand, and I shouldn’t expect realistic art work. There are artistic reason to play with color palette and change how things look from one panel to the next. But the inking in the first pages is just plain bland, and I can’t find a good reason why one would make a conscious decision to color them that way. 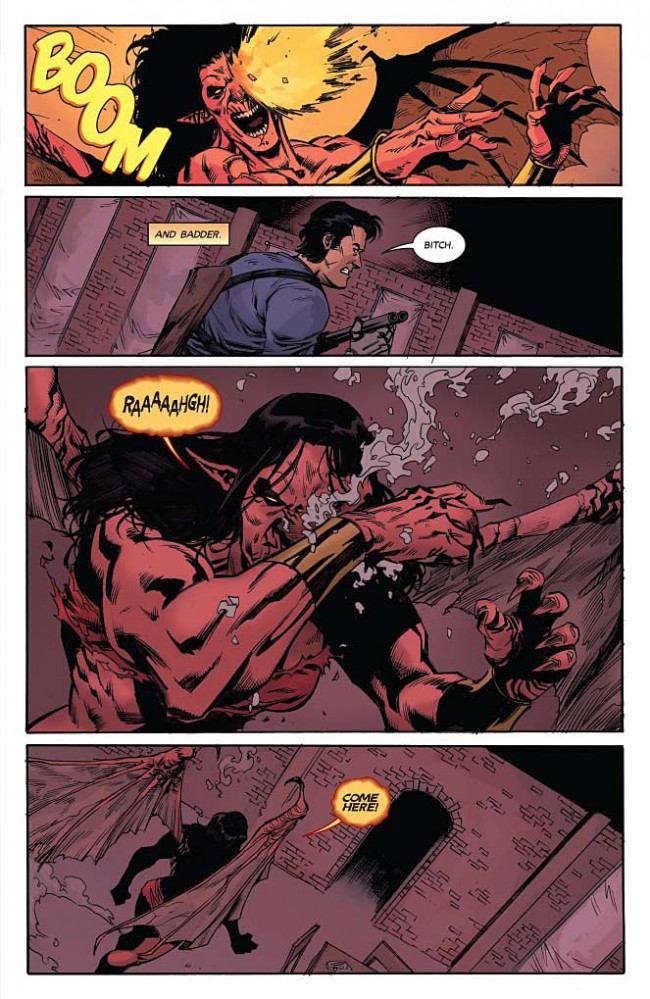 Thankfully, the art gets better overall from there. The rest of it is perfectly serviceable, and a few of the panels are pretty impressive. Despite the lazy start, Jethro Morales and Morgan Hickman deftly adapt Vampirella to the world of Army of Darkness.

The story is exactly what the ending of the last issue promised – Ash and Vampi fight each other. Up until the last few pages, an uninspired fight scene plays out, in which Ash runs around talking about how screwed he is, and Vampirella brags about how unfair the fight is. It’s a chance for witty dialogue, but unfortunately all we get is matter of fact, straight forward dialogue.

The characterization here is true to the source material. Both are represented accurately, but don’t reach their potential.

I’m not that big a fan of Army of Darkness, but I got really excited when I heard about a crossover with Vampirella. It seemed like the perfect medium for some humorous interaction between otherwise played-out characters. So far, the series is largely disappointing. Fortunately, there is still plenty of room for improvement, and it will be interesting to see if the next issues manage to deliver what fans want out of the series.

[easyazon_link identifier=”B013PUME2I” locale=”US” tag=”bounintocomi-20″]Vampirella / Army of Darkness #2[/easyazon_link] is an uninspired romp through the Evil Dead universe. Questionable art decisions and poorly written dialogue fumble what could have been a grand-slam of interesting interaction between two beloved, but well worn characters. Luckily, there’s still plenty of room for the series to redeem itself.