Jim Gordon visits Bruce Wayne seeking advice on being Batman, but Bruce is unable to give any. Alfred relays the reasoning to a certain Man of Steel all the while Mr. Bloom continues to threaten Gotham, even taking down some of its finest criminals. Will the new Batman be able to stop him?

Snyder picks up right where the previous issue left off with Gordon confronting Bruce Wayne. He asks him for advice on how to improve the suit and remove the monitoring devices Powers has placed in it and even appeals to him to get back in the game!

The dialogue does a decent job of characterizing the new Bruce although there are lingering doubts in the back of my mind on whether or not Bruce is telling the truth. Snyder also adds too many explicit details such as defining who Lucius Fox is or explaining that Bruce is working in the Narrows. It really bogs down the pace of the beginning of the book.

In an attempt to hammer home Bruce is a changed man, Snyder transitions the story to a lengthy conversation between Alfred and a member of the Justice League. (You will have to read to find out who!) It boils down to lengthy exposition in order to explain how Bruce is alive. There are some bright spots during this sequence especially concerning Alfred. You can almost feel Alfred’s love and heartache for Bruce pouring off the pages.

After spending half of the issue dealing with Bruce Wayne, Snyder switches gears, returning to Jim Gordon as he begins to take on the mantle of the World’s Greatest Detective. Snyder adds in some fun dialogue that continues to build the rapport and strengthen the bond between Gordon and Julia. Although it is nowhere near Alfred and Bruce levels, it is still enjoyable to see it progress. There was one major flub during their dialogue where Snyder attempts to make light of Spiderman. It just seemed out of place and something Gordon would never say. Unfortunately, Snyder makes this mistake again when he references Robocop. 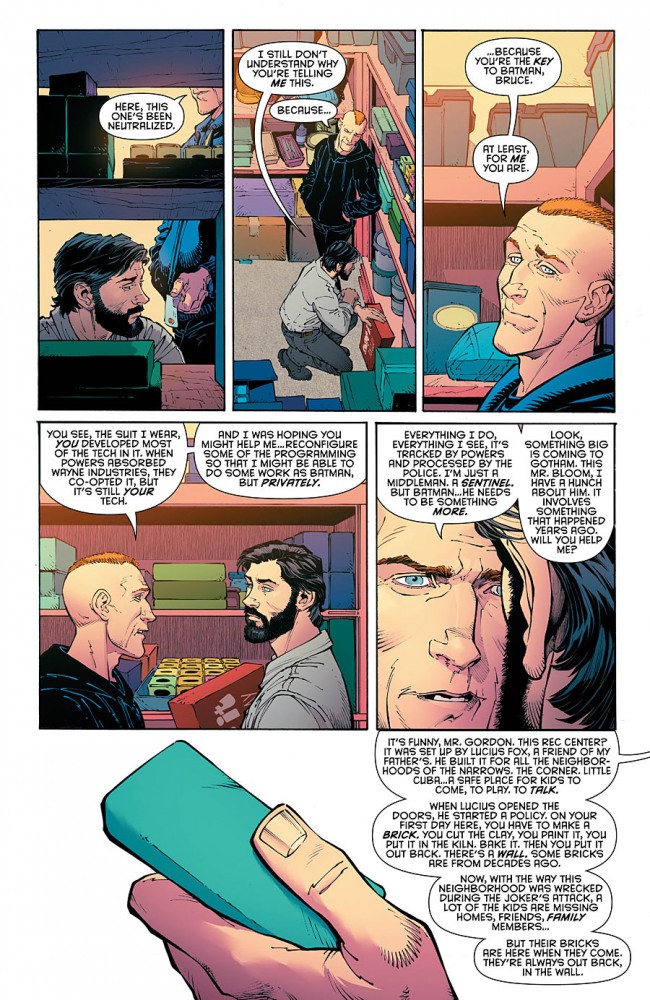 Snyder’s best piece of dialogue comes towards the end of the issue in a conversation between Mr. Bloom and Penguin. Both characters are straight to the point. Snyder has excised the extra details and gone straight for the meat. It makes it quite entertaining as the two verbally spar with each other.

Capullo’s artwork for the most part is good. The action scene at the end of the issue is particularly exciting, especially his diversity of panels. He makes excellent use of the full page spread, depicting a gun fight with profile shots of both of the gunmen as they fire at each other. He transitions this to an almost panoramic shot of the entire room as water comes rushing in. Finally, he lines up five panels across the bottom with all different viewpoints and artistic styles to depict Jim Gordon taking down the last-standing gang member. Oh, I almost forgot there is a great image of Gordon lighting one up in the Batsuit.

However, there were some issues with Capullo’s artwork. The panel following this epic full page spread depicts Gordon in a completely different location and it is rather unclear how he managed to get there and took me a number of read-throughs to finally get what was happening. 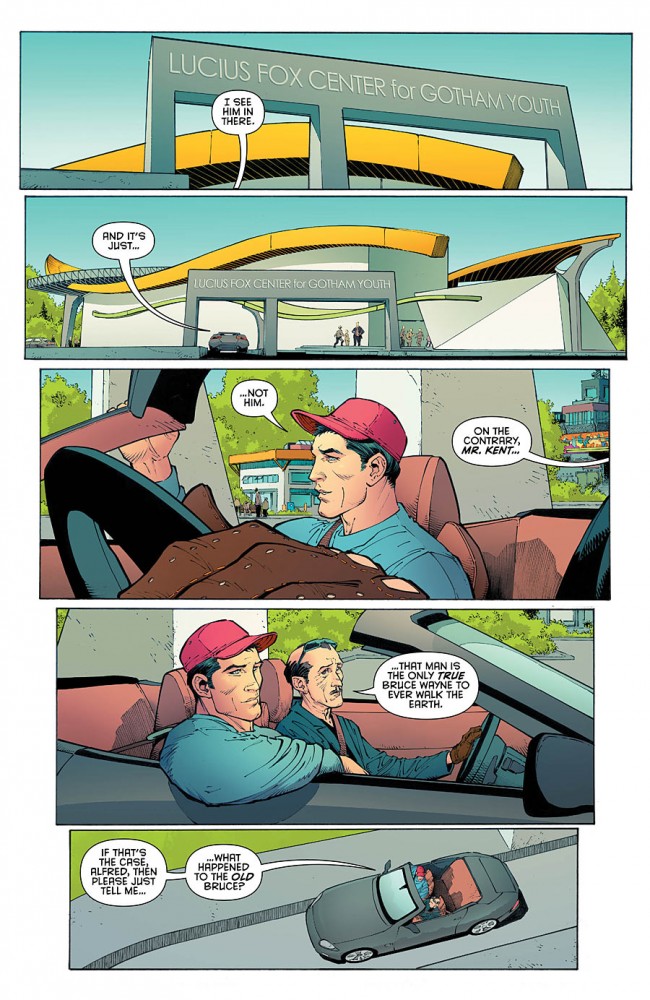 Danny Miki does a good job inking. He creates clear facial features which really aid in displaying the levels of emotion Alfred has towards Bruce.

The clear stand-out in this issue is FCO Plascenia. The colors are absolutely gorgeous and he uses a number of filters to depict a reflection into the past or a vision into the future. It is easy to tell this is happening without Snyder having to make a note. He also does an excellent job of contrasting the colors during the fight sequence, using the red of a gun fire blast to offset the blues and greens of the aquarium.

[easyazon_link identifier=”B010RD10V2″ locale=”US” tag=”bounintocomi-20″]Batman #43[/easyazon_link] starts off very slow as Snyder uses a lot of dialogue, much of it unnecessary, to characterize the new Bruce. He then provides a reason for why Bruce is the way he is now. There were some great moments pertaining to Alfred’s characterization and the final conversation between Mr. Bloom and the Penguin. Capullo’s artwork was generally good, minus the few scenes that were a little difficult to tell what exactly was happening. FCO Plascenia’s colors were absolutely stunning and were the highlight of the book from the differing filters to the contrast in colors. It was excellently done.