I don’t mean that in just the sense that this is another solid comic. I mean in that much obviously less important sense.

Trust me, there are bigger things to spoil in this comic than just that.
Let’s also look at this as part of a larger phenomenon though. Lots of people seem to be upset because they don’t like that this is Squirrel Girl’s “thing”. This issue probably gets the most ridiculous and obvious in terms of Squirrel Girl being “unbeatable”. So if one example of it isn’t going to work, it’s probably going to be this one.

In this situation the Avengers (just like most of the population besides Doreen, Nancy, Koi Boi, Chipmunk Hunk and a few others) are made up of non-super powered and aging Steve Rogers, the still learning Falcon/Captain America, two humans in the shape of Hawkeye and Black Widow. The only superhero here (as far as I’m aware) is Spider-Man.

So defeating the Avengers (not to take anything away from Doreen here) isn’t really as big of a stretch as some might feel at first. Remember, Doreen has superhuman strength and is a mutant. So she can easily over power any of the people without super-powers. So the only one you might have trouble believing is, realistically, Spider-Man.

But realism isn’t the point here. And I think people either forget that or purposefully ignore it so they can complain. Squirrel Girl is a response to the “realism” that’s become all of the rage in comics these days. She can talk to squirrels! Why? Because she was born like that. She can jump as high as a squirrel! Why? Well, mutated squirrel genes or something.

So, if you think that this situation is “unrealistic”, I’m sorry to say you’re just missing the point.

Anyways, this issue is more generally about the city in chaos. People are fighting everywhere, teachers are calling their students “self-absorbed millennials,” and some people are literally fighting about which is better: pancakes or waffles?

…Which is ridiculous because we all know that French toast is better than either. 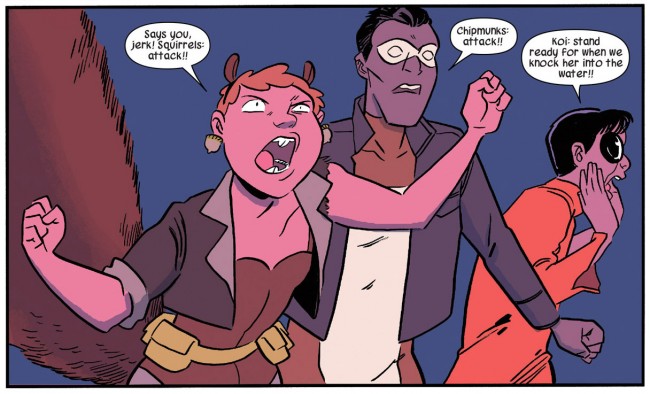 On another topic, I’ll say that while I appreciate Koi Boi and Chipmunk Hunk being a part of Doreen and Nancy’s posse they don’t really seem to be there to do much. Honestly, I enjoyed Nancy and Doreen’s shenanigans enough without them. That said, they’re not bad in any way and they hardly do any harm. Koi Boi often makes ridiculous statements and Chipmunk Hunk can’t stop himself from saying laughably macho things.

So it works, but it also feels unnecessary.

The issue starts off as a bit of a non-mystery. It’s mostly a mystery to the characters what’s going on but probably not the reader. We know who is behind the recent fights and once more context is given we also know why. The characters, to their credit, quickly pick up on it. So it’s not a big deal.

Squirrel Girl also says at one point: “…can I just say that it’s really satisfying to find out that someone you didn’t like for kinda no reason might’ve been secretly evil all along?”

We all know that feeling. 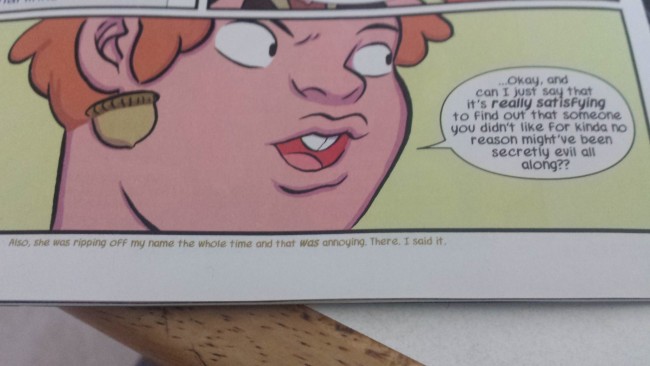 The artwork is a bit more varied here than usual. We have a few different sequences where Henderson and crew really kicks up the colors. There are other sequences where the art style is totally different yet completely gorgeous and works wonderfully. Later on in this issue we’re treated to some wonderful and vibrant colors that are sometimes subtle and sometimes not so subtle.

Props especially go to Rico Renzi as the color artist and VC’s Clayton Cowles for the lettering in this issue.

Otherwise the artwork is mostly standard fair. It was sometimes inconsistent with background characters or if we’re zooming away from our main characters. But that’s usual at this point and doesn’t seem to be changing. It’s also a minor nitpick, so it doesn’t count against this issue much.

More generally the plot involves turning something Squirrel Girl normally loves into something she must learn to really dislike. That’s a good lesson to teach but it also seems to come unnaturally fast to her. I understand part of that is lampshaded throughout the last issue and this one does much the same. But it still feels weird that Doreen would switch this fast even if it turns out to be justified in the end.

At the end of the day though these are all nitpicks. Squirrel Girl continues to be a fantastic, hilarious, well-written and typically beautifully drawn and colored comic. It combines the best things about what has made a lot of the Marvel movies work (their fun) with what makes Squirrel Girl work (her happy-go-lucky nature) and turned it into something for the 21st century.

This series has so far been a crowning achievement for Marvel as far as I’m concerned.

And it deserves to be celebrated.