It’d be easy to characterize Jeremy Massie’s All My Ghosts as another venture in Gonzo Journalism, but how does it fare?

The main character, Joe Hale, is an editor at a failing newspaper and has his writing go from as objective as possible to non-objective and personal. He goes to car pile ups with a cynical sense of; “at least it’s a story” mixed with the general disgust at big corporations, inefficient bureaucracy and crippling self-doubt. All of that certainly seems to fit the mold.

But Hale is neither as politically aware nor as extreme as either Jerusalem or Hunter S. Thompson, the inspiration of at least Jerusalem.

I bring up these comparisons not to downplay the creative elements of this comic. Because they are certainly there and waiting to be tapped into. This story is much more of a personal story than Transmetropolitan. Transmetropolitan, while personal at times for sure, was also a very political story. To me it mostly came off as a great story for folks who consider themselves distrustful of authority.

[easyazon_link identifier=”B00QLZ463K” locale=”US” tag=”bounintocomi-20″]AMG[/easyazon_link] is much more of a story between the conflict of tradition and our dreams.

As it happens Hale wants to actually write comics.

But when has that ever resulted in anything? Ahem. 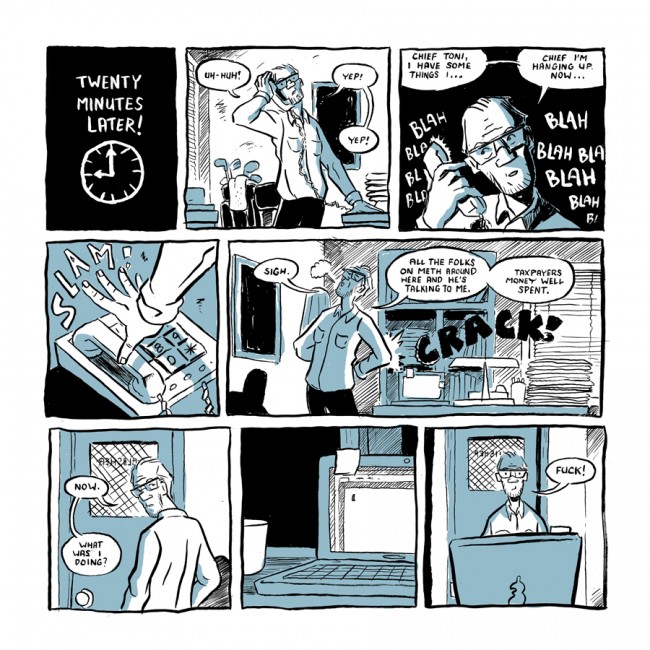 I want to start off with some good things about this comic first. It’s got a great and timeless premise. As I mentioned before it’s the conflict between the sense of duty one feels from family and tradition and doing what you want to do. That’s an excellent subject and one that could always use more thought and spilled ink (digital or not) about it.

It’s worth mentioning that Hale’s daughter has this conflict too but the story isn’t really about her as she resolves it mostly off-screen and only struggles with it for a few panels while she tells her (soon to be overjoyed) father about her unwillingness to run the company for him.

The real center of the conflict within Joe himself: Will he sell the newspaper that’s been handed down from generation to generation? What will happen to the people involved? Can he really give it over to a big corporation he doesn’t like or trust?

The story spends some amount of time on these conflicts. But it’s also about Hale’s personal journey throughout this decision. He decides to get hammered for the first time in a long time, hooking up with a woman far younger than he is and finally writing what he wants to write.

As a writer myself, I definitely felt a bit of comradeship in Hale’s struggle with writer’s block. Though my writer’s block is usually in just where to start and not once I’ve already got it going. But for Hale he can’t think of anything to write and as we find out that’s because of this conflict he has between doing what he wants to do and what is good for the paper. 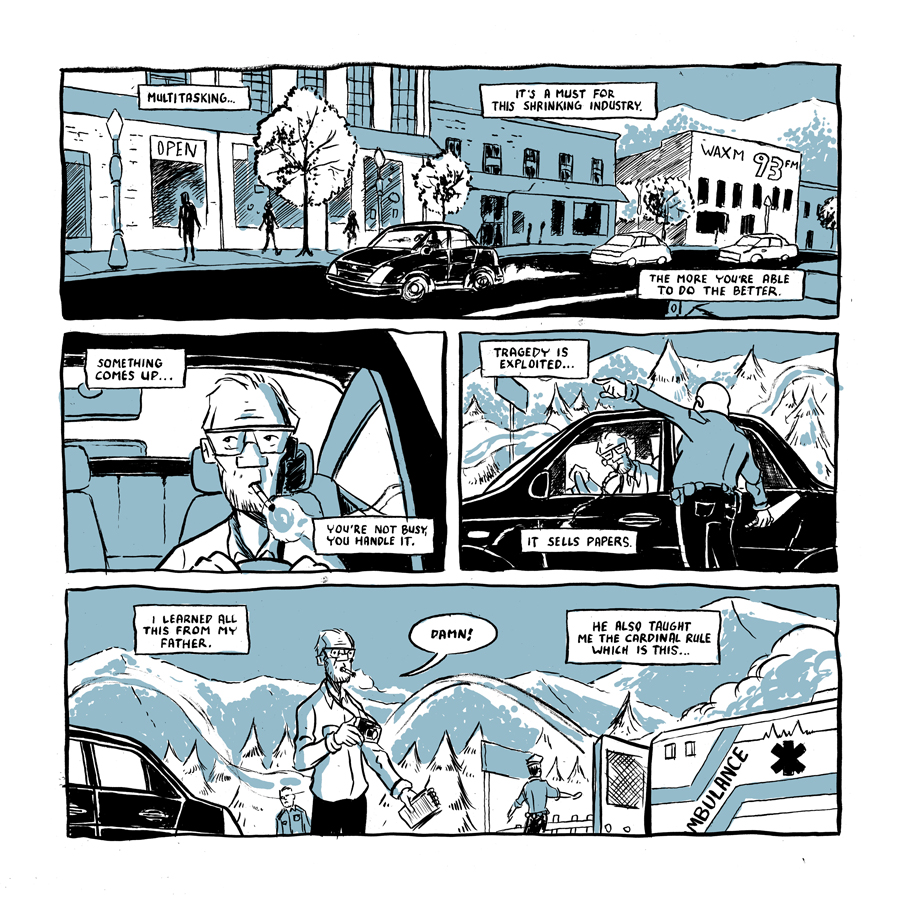 The backdrop of this story is a small town that is down on its luck. A lot of the people in the town aren’t buying the newspaper anymore and some may not even have the money to spare from what it sounds like. Of course it doesn’t help that it’s the age of the internet and so newspapers are largely out style both in the real world and in this story. So that part of the story certainly still rings true in 2015.

But what really hurts this comic is its length. I wish it was at least 20 pages longer because as it stands the ending is just too rushed. The reactions based on Hale’s decisions make him come off as, to be frank, a dick that never actually cared about the people at the newspaper firm. And maybe that was the case but it certainly didn’t seem like that with the speech he gives towards the end. Maybe his carefree attitude and wrecking the newspaper was who he was to begin with but then maybe the message of “be yourself” is not as applicable as it might otherwise be if who you are sucks.

It would’ve been interesting to see more from Hale’s brother, his ex-wife and his daughter. I understand that it’s fundamentally Joe Hale’s story and so it should be majorly centered on it. But his brother just shows up for a few panels, his ex-wife is nothing more than a panel or two and his daughter is hardly existent. There are no scenes of his daughter being his Jiminy Cricket.

Worst of all Hale keeps a big decision from the other people who work at the newspaper with him, a decision that would impact their lives and their jobs. He does this right up until almost the end. It really made me dislike the character, especially since he claimed the people in the newspaper in the firm were his family. Again, maybe I’m missing the point maybe Hale is a bad guy and I just want him to be a better person.

But this ambiguity in his moral goodness isn’t what I think I should be reading about. 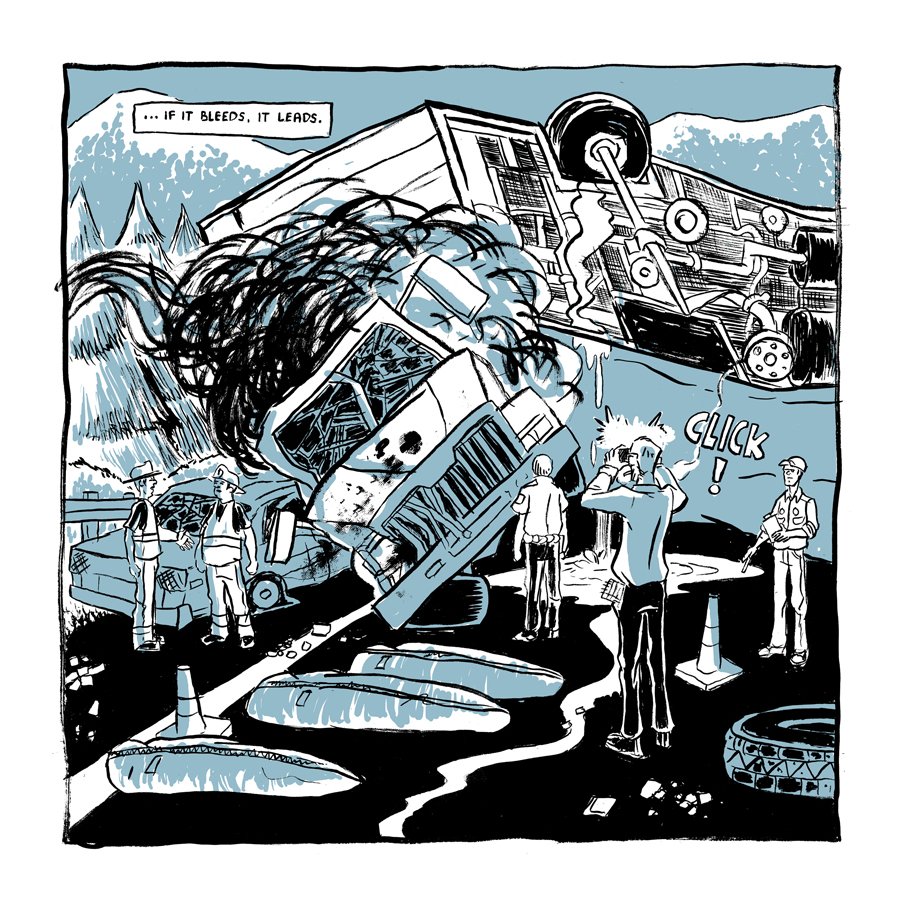 To return to the good parts, I want to say that the artwork, while very simple is also very well done. It’s got a nostalgic cartoon style that’s mostly black and white and heavily stenciled and lined. It may be simple but it’s also wonderfully expressive and often relays the emotions of the character. Though, on the other hand, it can sometimes do it too quickly. Sometimes the motions of the characters go from one motion to the other a bit too quickly.

There’s another aspect of Hale in that you can also identify with his total sense of burnout. That if he doesn’t do something about this situation that he’ll just end up not being able to write at all and keep living doing a job he doesn’t have any passion for anymore. It’s not an uncommon situation and I don’t think he deserves no sympathy just because he was a liar.

Then again, there are smaller ways that he’s unlikable. He uses one of his so-called friends, Billy Buchanan in the newspaper to go get hammered. Billy isn’t really that interested at first but Hale uses (and we know this because he says it to himself) Billy’s “Catholic guilt” against him and apparently has been doing so for years. This isn’t something that Hale decided to do this one time because he’s feeling like shit but apparently something he’s been doing for a while now.

You may also notice while reading the book that it has an abundance of swearing. Maybe I’m not one to talk here but it just seems a little unnecessary at times to swear in a lot of the panels. I mean, I can see some swearing happening here and there. But do people really swear as much as the people do in this comic? It’s a small thing but it’s something I noticed that bothered me. Just because your characters can swear without being uncensored doesn’t mean they need to. 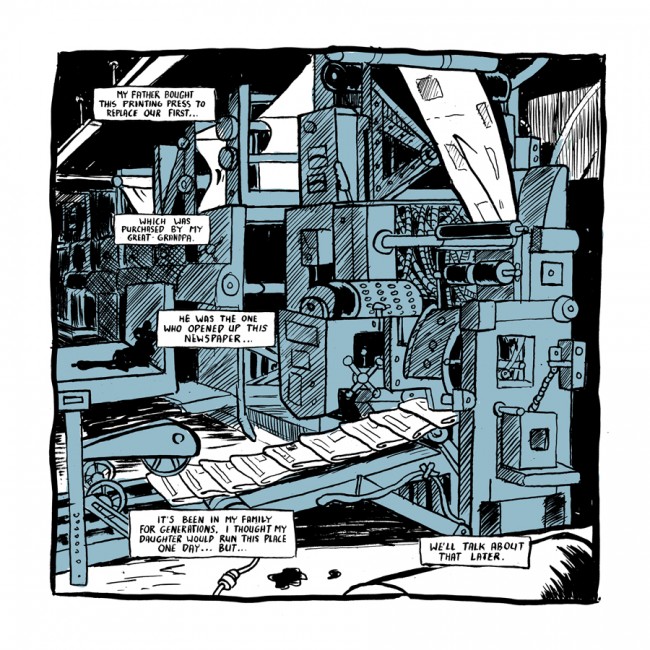 Honestly, all of the small problems pale in comparison to the delivery of the ending though.

It feels so rushed that I had to go back and read it a few times to make sure I hadn’t missed something.

But the only thing you really miss out on is the story. I just didn’t feel like the side characters had enough room to be interesting and in the end I found Hale a generally unlikable character whose conflicts ended up hurting more people than it helped. He just comes off as a selfish, petty and an uncaring person.

And again, it’s not that it’s impossible that [easyazon_link identifier=”B00WJAW0OS” locale=”US” tag=”bounintocomi-20″]All My Ghosts[/easyazon_link] was going for this. But if it was then I’m not so sure I should feel this ambiguous about its intent to begin with.

Oh, and there’s supposedly something about ghosts in this story. But it’s unclear what direction we’re supposed to see it as. Is it supposed to be literal or metaphorical? Either way too little time was spent on it and didn’t accomplish its emotional intentions for me.

The story’s not bad but it’s handling a timeless conflict that’s been done a million times before. That doesn’t mean it shouldn’t have been done but just that when it’s not done interesting it can’t really be recommended when there are so many other ones out there that do it better.

Still, you can get it for under $10 and if you’re really hankering for some rude characters, interesting premises and lots of swearing, well it’s not a bad buy I suppose.