The horror/political thriller series, The Eighth Seal is a fantastically unique and well-executed series that IDW Publishing is proud to bring to print this December.

James Tynion IV, writer of TMNT/Batman, also available in December, scribes a story about a woman whose visceral nightmares about transforming into a demonic monster start to bleed into reality. But this woman isn’t just any woman; she is the First Lady of the United States, and this is all happening under an intense political spotlight. As she struggles with the loss of her civilian lifestyle, she is also seemingly losing grasp on her mind…or do these visions hold some darker truth?

“This story is like the TV show ‘The West Wing,’ with a little of the horror classic ‘Rosemary’s Baby,’ and some ‘Nightmare on Elm Street’ all rolled in to one. It’s got political intrigue, shadowy figures, and of course a terrifying demon to scare you in all different ways,” said Comic Spectrum.

“The Eighth Seal is the purest work of horror I’ve tackled in my career, and I’m thrilled to see it come to life again in print,” said series writer, Tynion IV. “There’s nothing more frightening than the distinct feeling that you’re going insane, that something in you has twisted and is pulling you towards your darkest instincts… It’s the fear that something inside of you can destroy everything you love. And when you’re the First Lady of the United States, the stakes are only that much higher.”

“I’ve been a huge fan of James and Jeremy’s work on The Eighth Seal since I first saw it, and it makes me very happy to see this series come to IDW,” said series editor, Michael Benedetto. “The atmosphere here is horror at its finest, and I’m sure many will agree after picking up the first issue. The political and psychological elements are blended perfectly and lead to an ending that does not disappoint!”

“Eighth Seal is a unique take on both a political drama with a demonic possession horror story. The writing is solid and art goes above and beyond what we normally see in a horror comic. Try out this comic and you’ll be so freaked out that you’ll just have to come back to find out more.” – Comic Spectrum 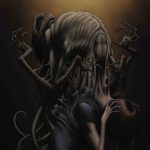 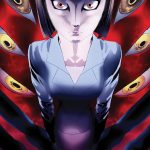