Atomic Robo has gone missing and what is left of the Action Scientists has gone into hiding, but now they are teaming up to find and rescue Atomic Robo. However, he is deep within the territory of the secret police, Ultra. Meanwhile, giant sea monsters known as Biomegas are threatening to attack. How does it fare?

If you are new to Atomic Robo like I am, this will be somewhat of a steep learning curve to figure out what is happening, especially if you decide to skip the one paragraph introduction laying out some necessary back story. Writer Brian Clevinger begins [easyazon_link identifier=”B01429UTAA” locale=”US” tag=”bounintocomi-20″]Atomic Robo: The Ring of Fire[/easyazon_link] hinting at the looming enemy that is Ultra while also noting that the title character has gone missing. After this brief exposition, he jumps into some good character introductions as one of the apparent Action Scientists is drinking his problems away at a bar in Mexico while another attempts to pull him out of his depression and bring their team back together.

The drunk, Bernard, doesn’t take too much convincing and Clevinger takes him to the team’s secret base where he introduces the rest of the crew, although the only one who gets a name is the intern, Foley. After the brief introductions, Clevinger lays on the exposition, explaining what happened to Atomic Robo. It can get very geeky which gives the book some character and makes the exposition entertaining, although it may turn some people off. Nevertheless, I enjoyed the discussion about the Fifth Cardinal Direction Zorth.

Interspersed between the Action Scientists’ adventures are Ultra’s forces in Japan as they attempt to figure out how to operate a Titan in order to combat the Biomega threat. It is a little unclear what the Biomega threat is and if you didn’t read the introduction paragraph you might think the Biomegas are related to Atomic Robo. The dialogue during these scenarios is well done with a hard-ass commander whose only mission is to get the job done and isn’t afraid to get her hands a little dirty. 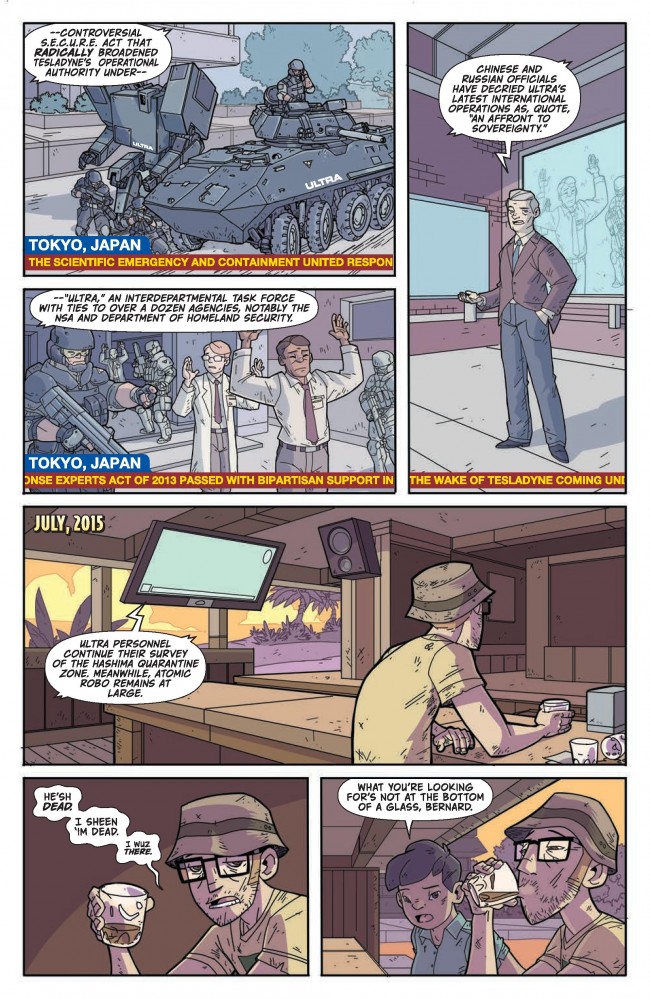 The Action Scientists’ rescue mission is a lot of fun and full of suspense and action. They have to use their technology to avoid detection by Ultra and if that fails they have to use their wits. This action scene shows how well the team meshes together and their trust and faith in each other as they communicate very well.

Scott Wegener’s artwork does the job well. The chase scene in the van was definitely the highlight as the van whips around a quiet suburban neighborhood in Colorado Springs. He does an excellent job of depicting the intensity as Ultra forces race after them. He uses a number of motion lines both on the pavement and in the sky to capture the essence of a high speed chase.

However, he depicts a missile striking in the middle of a park as a somewhat minor explosion, only having two or three trees on fire. Background details are very plain and standard and at times even spartan-like. There was one panel where a computer screen had multiple windows open, but they were just blank rectangles with nothing actually on them.
Anthony Clark’s coloring was decent. It matches the austere nature of the artwork with uninspiring browns and grays. He even colors an exotic swimming pool a brownish-yellow. I don’t know how any of the patrons can stand being in it! 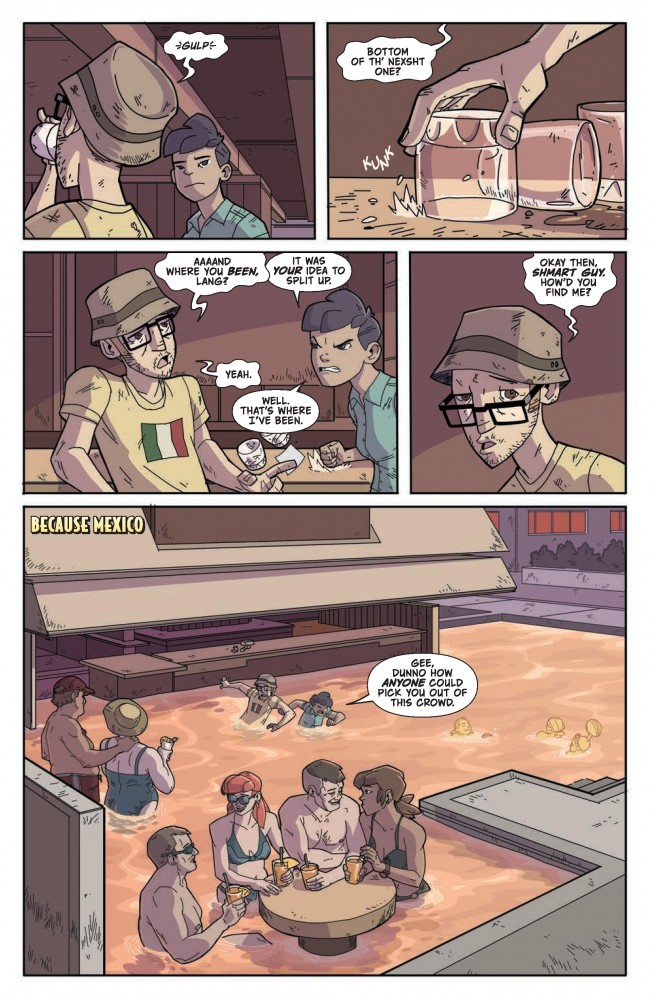 [easyazon_link identifier=”B01429UTAA” locale=”US” tag=”bounintocomi-20″]Atomic Robo: The Ring of Fire[/easyazon_link] can be a tough jumping on point if you haven’t read any previous installments. However, it tells a gripping story with some interesting characters in a compelling world. The team chemistry is on top display here, but it can be overshadowed by the scenes in Tokyo which were hard to figure out, especially since Biomegas are never defined in this issue. In addition, it is unclear whether or not the military there are actual villains, heroes, or something in between.