When you crack open a crossover comic book about Ash and Vampirella, you know what to expect. You know what kind of things are going to happen to the characters, the kind of dialogue you’ll read, and so forth. The only question is to the quality and presentation of the story.

So far, the Vampirella/Army of Darkness series has disappointed in that regard. But issue #3 has taken things up a few notches.

Issue #2 teased Vampirella’s trial for being a witch amidst the preparations for the approaching undead hordes that will soon besiege the castle. That means that we have to deal with an entire issue before we get to see the only 20 minutes of the movie I actually enjoyed portrayed in the comics, albeit this time with a scantily-clad vampire lady helping the defenders.

So while I expected to be frustrated with this issue, I actually found it to be a pleasant diversion leading up to the real action. The interaction between Vampi and Ash is far better than last time, despite an unbelievable sudden loyalty having developed between the two. Ash’s dialogue feels very much like what his movie character would say in these situations. 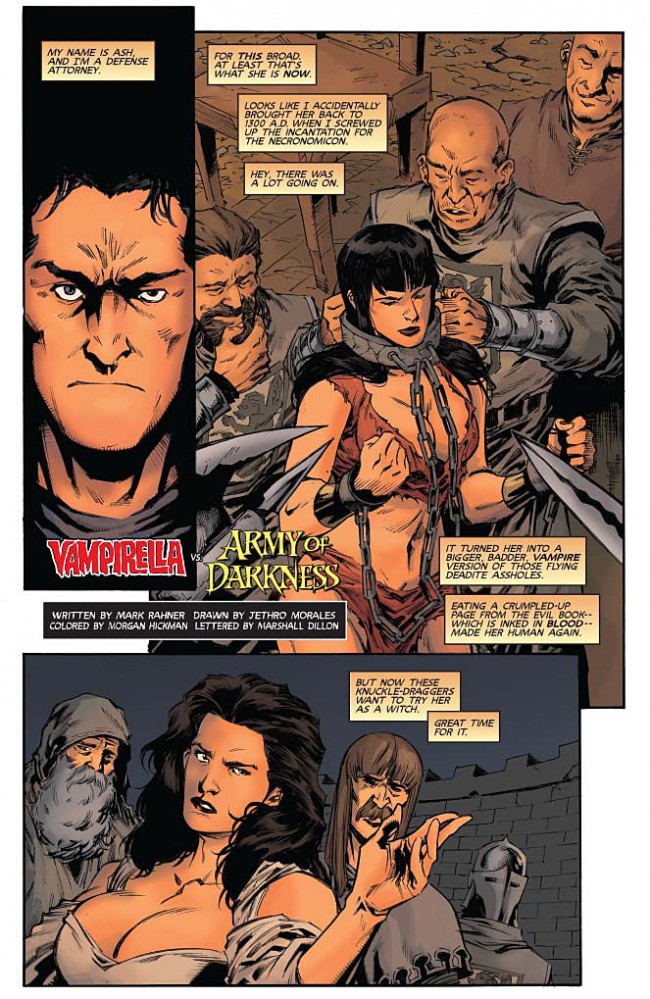 The dry humor actually got a few slight chuckles from me. Given that Ash didn’t really do much but talk in this installment, I’m looking forward to writer Mark Rahner applying this wit to some one-liners when the action starts.

Another nice touch is the introduction of an additional threat at the end. It counterbalances Vampirella’s presumed presence in the clash to come.

However, there were a few moments in the story that felt a bit off. For instance, I had a hard time believing that Ash would be so ignorant of history that Vampi’s trial being a sham came as a surprise to him. Later on, Vampirella challenged her accusers with information that doesn’t seem likely she would have.

Morgan Hickman’s colors are vastly improved over the previous outing. There’s no getting around the fact that the entire issue takes place in one location. However, artist Jethro Morales takes advantage of varying angles and perspectives, allowing Hickman to introduce the kind of variety that was sorely lacking last time around. Overall, everything is well portrayed and stylish. 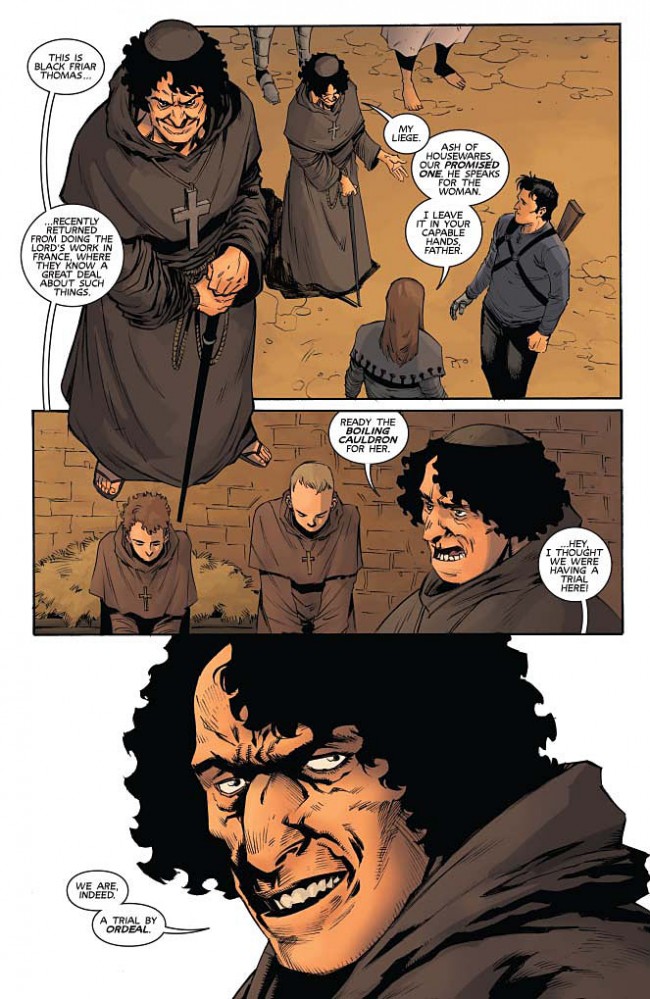 In the end, [easyazon_link identifier=”B014E21N1Y” locale=”US” tag=”bounintocomi-20″]Vampirella / Army of Darkness #3[/easyazon_link] feels very much like a filler issue, occupying the requisite “#3” before we get to the real reason we’re all here. Given that there’s virtually no action this time around, and the character development is unsurprising and uninspired, fans of either Vampirella or Evil Dead could easily just skip this one and read the next issue without missing much.

In the meantime, you could check out Aliens / Vamiprella #1. John says it’s pretty good.