Bruce Wayne is back under the cowl as the Mr. Bloom storyline is put on hold to flash back to a case just after Zero Year. Batman attempts to solve the murder of Peter Duggio. How does it fare?

[easyazon_link identifier=”B014LNB3YS” locale=”US” tag=”bounintocomi-20″]Batman #44[/easyazon_link] takes Batman through an array of Gotham’s underworld as he follows the evidence and the word of the criminals he interrogates. Scott Snyder teams up with Brian Azzarello in this issue and the two predominantly use a narrative to tell the story, but it is unclear who exactly is narrating. It definitely isn’t Batman. The use of the narrative allows artist Jock to kind of free wheel with the artwork. As an example, Snyder and Azzarello detail Penguin’s business dealings as he builds his own empire; however, the artwork doesn’t depict this at all. Instead, it shows Batman cutting through the Penguin’s goons until he finally gets to the man himself.

The main gist of the story attempts to mirror current events, characterizing Peter Duggio as a down-on-his-luck African American whose Dad is in the hospital and his small sandwich shop lies vacant with three competitors trying to get access to it: Penguin’s gang, the local Four Fives gang, and the bank.

Instead of negotiating with the bank, Peter turns to crime and the Penguin, where he ends up getting on the bad end of a business deal and a known criminal screws him over. Apparently, Peter tries to reach out to the GCPD Gang Unit, but Jock never portrays this and it only comes from Tano, the head of the Four Fives Gang.

This is one of the major problems in this issue. Batman acquires almost all of his information through interrogation. He doesn’t actually look at any of the evidence; instead, relying on threat of physical harm to acquire any leads. The story also lacks any clarity for sympathy towards Duggio. There is a scene with a police shooting, but it is only after Duggio took to crime and committed apparent arson to his own sandwich shop. To make matters worse, he goes and makes a deal with Mr. Bloom which ends up leading to his death. 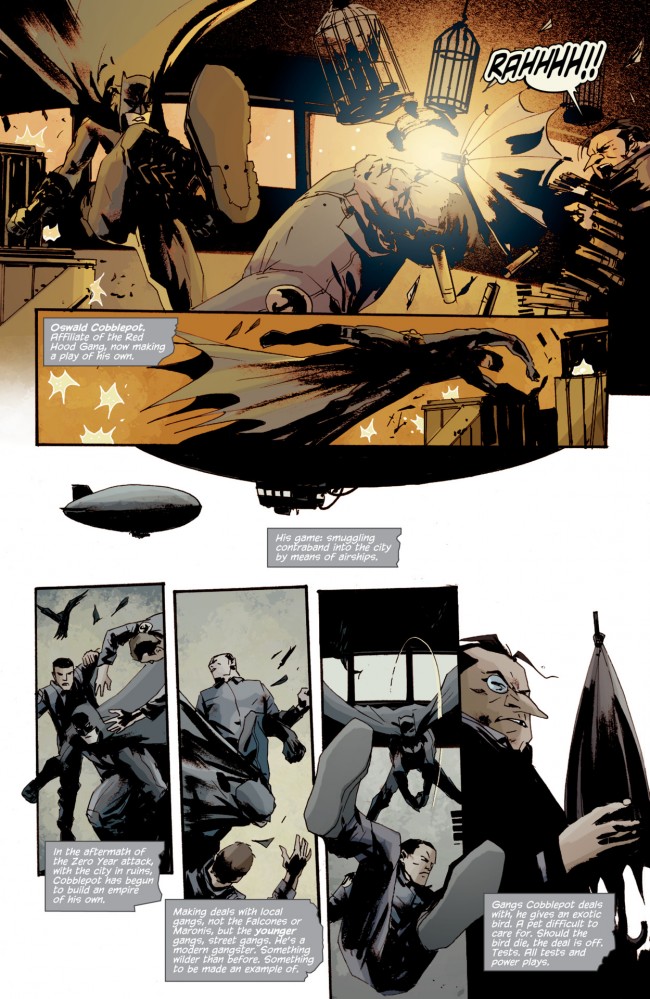 Snyder and Azzarello not only use the narrative, but at times it is quite excessive. There is an entire page dedicated to Batman’s notion of being a part of the city. Snyder and Azzarello describe a game where Bruce would attempt to listen to the city; it then transitions into a recounting of how well in tune with the city he is; to a sentence that just throws it all away noting, “But above all, he knows what matters is stopping who killed Peter.” Why include this if you are going to just shrug it off as an after-thought at the end of the page?

Jock’s artwork is decent, but as mentioned before it doesn’t always line up with the script. Some of the combat sequences are also a little hard to follow. There is one sequence where it appears Batman takes off his cape and uses it to combat the Four Fives. It is difficult to tell what is actually happening and in one panel Batman looks like he is throwing out his cape like a beach towel.

After this initial skirmish, Batman finds himself with two guns pointed right at him. It is unclear how he gets out of this predicament because when Jock returns to this scene a bird gets its neck chopped off and Batman seems to be questioning someone via his radio. It is rather confusing.

There are some very cool depictions though. A panel with Batman having electricity running through his suit is especially awesome to look at as well as depicting Penguin captured in a bird cage. 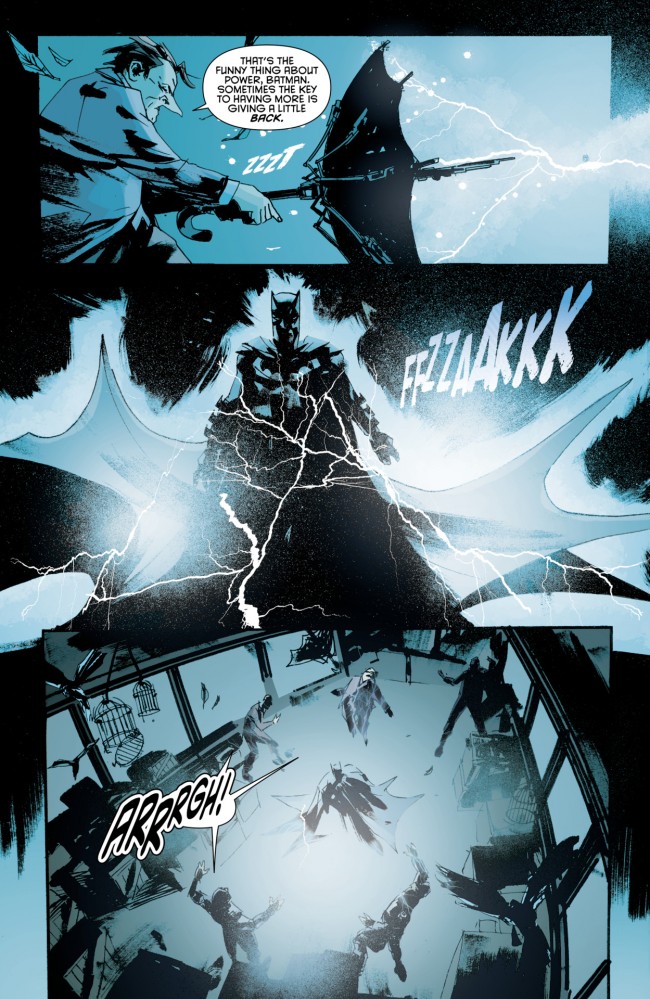 Making Jock’s artwork even more difficult to comprehend is Lee Loughridge’s colors. Much of these battle sequences use a lot of grey, black, and white. The greys and blacks blend together, making it hard to differentiate what is happening.

Loughridge does do a good job when depicting Blossom Row with its colorful, yet dark greens giving off a dangerous jungle atmosphere. He also does a decent job of creating an overall grim atmosphere through the Corners and Gotham in general. It feels like Gotham.

[easyazon_link identifier=”B014LNB3YS” locale=”US” tag=”bounintocomi-20″]Batman #44[/easyazon_link] struggles with lengthy narration and an antagonist who Snyder and Azzarello attempt to get you to care for, but his own choices and actions really leave no sympathy for him. They also attempt to use current events in the story and it can feel a little too obvious in that sense. The artwork had its shining moments, but also its difficulties. There were some cool scenes with Batman and lightning, but the combat sequences were almost impossible to tell what exactly was happening. Not helping the combat sequences were Lee Loughridge’s colors, although he did excel at capturing the feel of Gotham.