The most nominated publisher of the 2015 Harvey Awards will be going all out as they head to the Baltimore Comic-Con beginning on Friday, September 25th and running through Sunday, September 27th.

They will be bringing their cross-country 25th anniversary convention tour to the Baltimore Comic-Con 2015. You will be able to find Valiant at Booth #2008 where they will have a wide selection of trade paperbacks and deluxe hardcovers for their nominated titles including Archer & Armstrong, Armor Hunters, The Death-Defying Dr. Mirage, Quantum and Woody, Rai, The Valiant and many more.

They will also be debuting the Book of Death: The Fall of Ninjak #1 Baltimore Comic-Con Exclusive Variant created by multiple Eisner Award nominee and Emmy Award-winning artist Dean Haspiel. 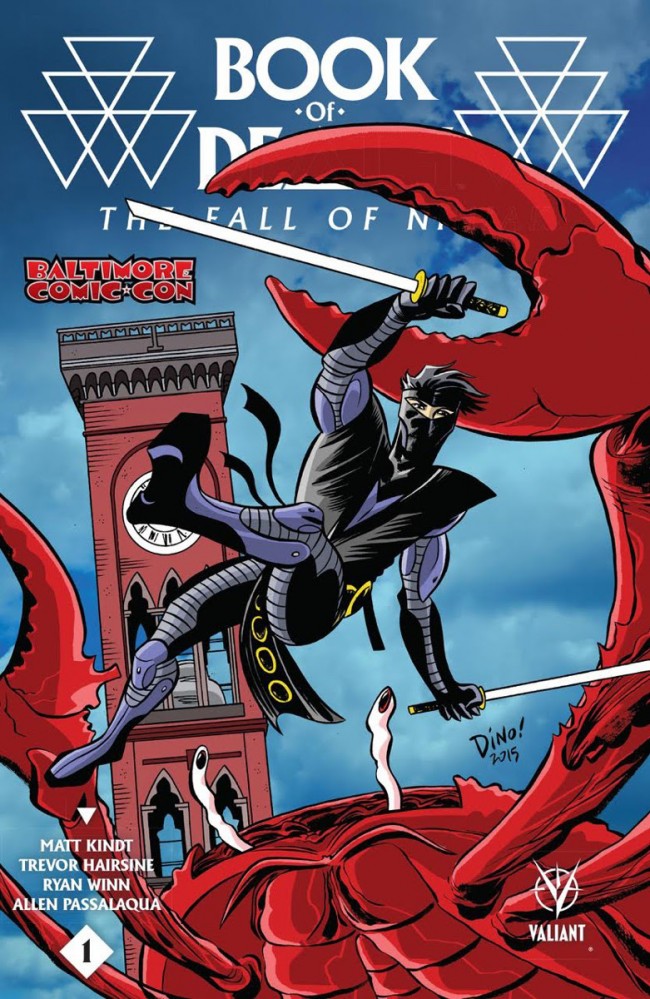 There will also be two Valiant panels. The first will be on Friday, September 25th at 2:30 pm ET in Panel Room #343-344. The topic will be Valiant 101: New Fans Start Here and will be a concise and fun-filled introduction to Valiant’s biggest, most memorable characters. If you are looking for where to start this is the panel for you.

The second panel will be on Saturday, September 26th at 12:15 pm ET in Panel Room #343-344 discussing 25 Years of Valiant: Book of Death And Beyond. This panel will spotlight the next earth-shaking changes coming to Valiant’s biggest heroes with artist Clayton Henry, writer Matt Kindt, writer Robert Venditti, Valiant Editor-in-Chief Warren Simons, and Valiant CEO & Chief Creative Officer Dinesh Shamdasani. They will be discussing everything from the events of Book of Death and Wrath of the Eternal Warrior to the huge changes for X-O Manowar, Bloodshot Reborn, The Death-Defying Dr. Mirage, and Divinity among others.