No question about it, I was going to buy this issue. Spider-Man 2099 (Miguel O’Hara) is one of my favorite characters. His original debut and run came as I was just getting in to comics. This was early 1992, and the comics industry bubble was inflating every quarter, seemingly with no end on sight.

I was 10 years old, and mostly read Marvel comics, Spider-Man being my favorite. The character was celebrating his 30th birthday and Marvel was pulling out all the stops: gatefold-foil covers with holographic cards and posters, extra content, and in the case of Amazing #365, a five page sneak peak at the Spider-Man of the future! And without really understanding how daunting it was to collect comics in any meaningful way, here came this new extension of the Marvel Universe and I was getting in at the ground level. I did yard work, collected cans, and walked dogs so that every two weeks, I could go to the comics shop and buy some comics.

I own every appearance. I own the action figure. I have a custom Spidey 2099 hoodie.

Now I don’t say this just to highlight my personal bias, though it’s there. I say this to underscore my original statement: I was going to buy this book. No question about it. But was I going to like it? 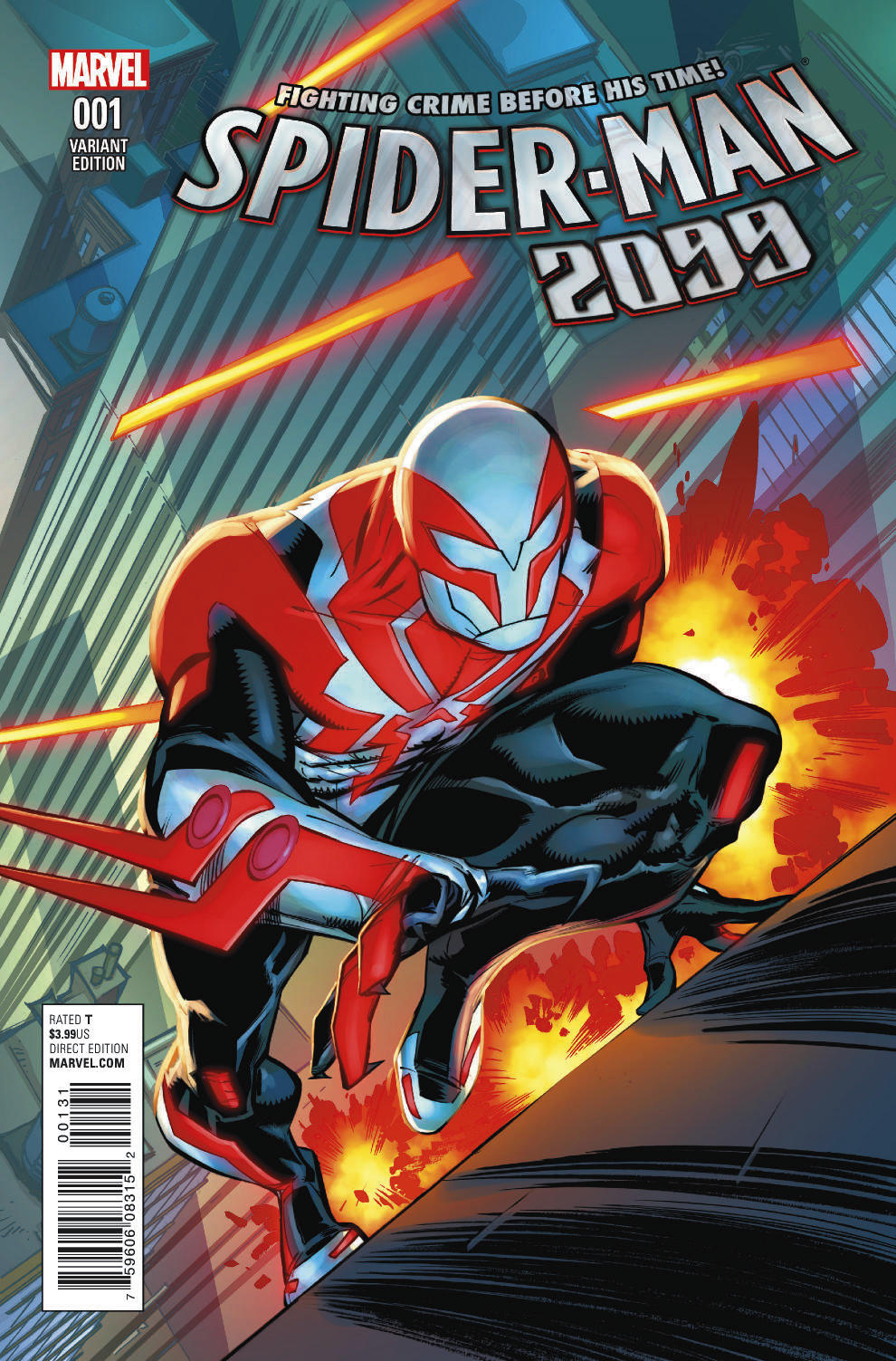 I wasn’t hugely impressed with the series that began last year. Half of it’s 12 issue run was spent wrapped up in the Spider-verse mess. And while I never really cared for the man out of time elements in the present day, there were some really good moments set in 2099 involving Strange and the Maestro- The Hulk in the future (not to be confused with future Hulk 2099). But all that came to an end for last summer’s Secret Wars/Battleworld crossover. Yet Miguel O’Hara wasn’t gone, he was back in an alternate universe, running his father’s company (ruthlessly), and bankrolling and controlling an all new version of the Avengers 2099! And it was fun! But now that has come to an end for something “all new and all different” with Miguel once again returning to the present and hoping to prevent the destruction of his home. The future.

So, how is the new issue?

[easyazon_link identifier=”B015NSFSC8″ locale=”US” tag=”bounintocomi-20″]Spider-Man 2099 #1[/easyazon_link] opens up with Miguel giving a very public display of his physical abilities in a mock up of American Ninja Warrior. We see he is back with Tempest, a romantic interest who had previously turned into a giant killer wasp creature and tried to kill him… but apparently, she is better. Peter Parker, now head of the multi-national Parker Industries, and O’hara’s boss, gives him a well earned dressing down for appearing in a compromising fashion on broadcast television, and in a bit of foreshadowing, bemoans Tempest’s influence on him. Miguel assures him that as Head of R&D for Parker Industries, and having found love, he no longer has the desire to don the mask anymore. 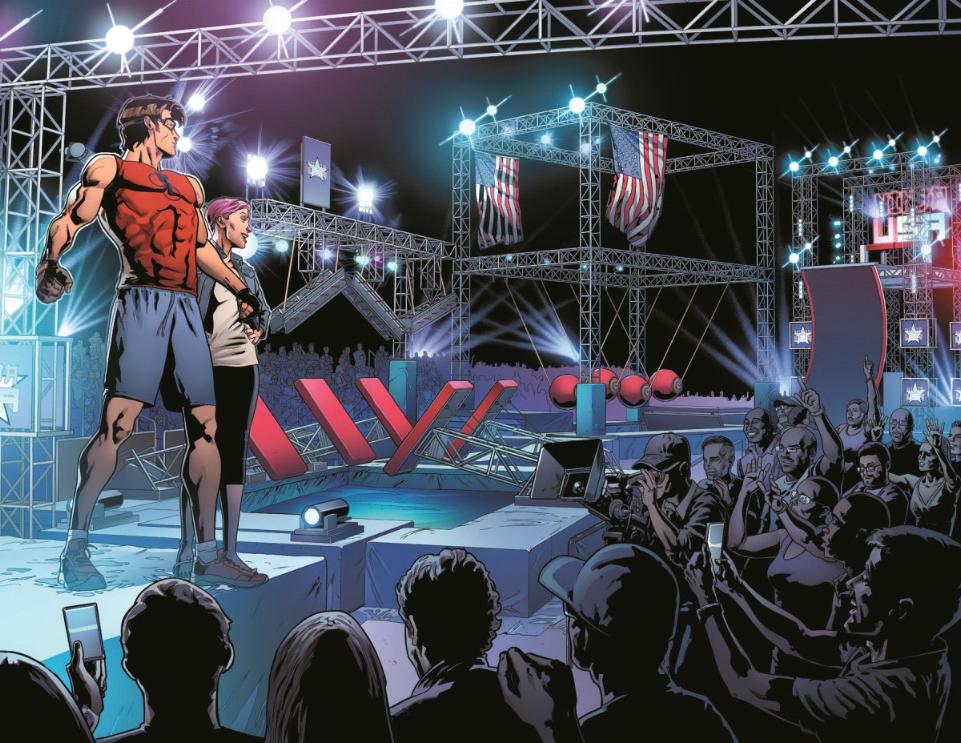 We then meet his assistant Raul, and in a humorous exchange, Raul’s assistant Jasmine, and then HER assistant Roberta Mendez (whom astute readers will recognize as someone from the cast of the Avengers in Secret Wars 2099), and Miguel learns that his grandfather’s upstart company Alchemax has lost the prison funding he had been seeking. Taking over is a company called Empire Unlimited. However, a quick trip in a time machine is enough to show our hero that the future still needs saving. A few other shoes drop before this issue wraps, which I won’t spoil, including further details of Alchemax’s current situation, and at least one significant emotional moment, setting up the threads for the next few issues. 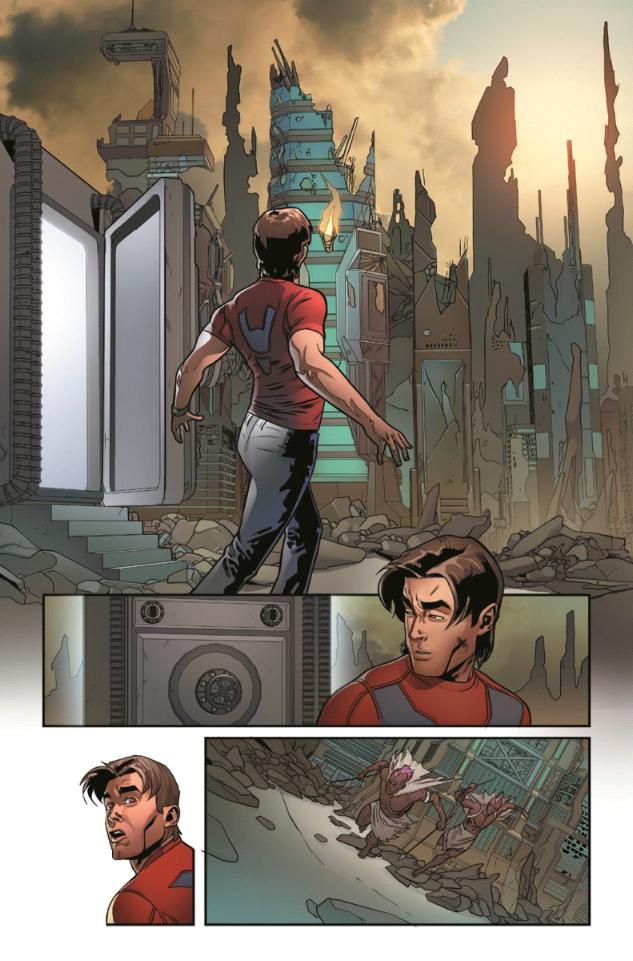 It seems like Peter David actually has an interesting story to tell, and isn’t afraid to have a little fun along the way. David is a master of using dialogue to drive the narrative instead of internal monologue. This has always been in contrast with Peter Parker who seems to spend half his time thinking and worrying. The connections to both the previous Secret Wars and the prior series before that give it solid grounding and the emotional beats are well written and leave the reader wanting more.

William Sliney is finally starting to get a hold out how to draw Miguel in action. He will still probably never fill the shoes of Rick Leonardi (variant cover above) though. In my opinion, his style for the character and ability to successfully express a full range of facial emotions is superb. The backgrounds look especially nice, and each change in setting starts after a page turn, which allows for a smooth flow of the story. All in all though, I liked it quite a bit. I will definitely be picking up the next issue. Then again, that wasn’t really in question. till next time, happy reading!