IDW brings us more 1980’s nostalgia filled fun, not only taking advantage of the adult market surge that is driving comics sales, but also some mighty timely synergy with the release date being the future date in which most of Back to the Future II infamously takes place. Adding to the mix, Bob Gale, the screenwriter of the films, is back to take the helm writing.

So what do you get for your $3.99 in [easyazon_link identifier=”B015EVKMN4″ locale=”US” tag=”bounintocomi-20″]Back to the Future #1[/easyazon_link]? Two stories that deal with the history of the characters. (That’s $2 per story, folks!) First we get the answer to the question I’ve been wondering for years in “When Marty Met Emmet”, while the followup, “Looking for a Few Good Scientists” explores Doc Brown’s younger days as a professor.

“When Marty Met Emmet” is warm with the glow of memory. Doc Brown is living in 1885 and tells his boys Jules and Verne about how he met his young time traveling friend. Kelly Fitzpatrick’s colors really shine here, and it feels like stepping out of a Delorean a few years before the events of the first film in 1982, as Marty is in his garage wailing away on his guitar, when Needles and his flunkies approach him and demand they “borrow” his amp’s interocitor tubes (a sly reference to the sci fi schlock classic “This Island Earth”) for a gig later that night. The tube breaks and Needles threatens to beat Marty up if he doesn’t procure a working one before the gig. This leads young McFly to the home of one Dr. Emmet “Doc” Brown where, through luck and the help of a Rube Goldberg machine, the two meet and strike up a friendship that will span decades… and beyond!

In the second half of the book we get a bit of a truncated tale from 1943, as Doc discovers that many apt pupils and faculty members from the California Institute of Technology have been recruited for a top secret project relating to the war effort. There are a number of humorous moments as young Doc Brown succeeds despite his own missteps. Dan Schoenig’s art work here is particularly effective at giving Brown the sort of animated characteristics that Christopher Lloyd’s likeness hasn’t enjoyed since “Who Framed Roger Rabbit.” 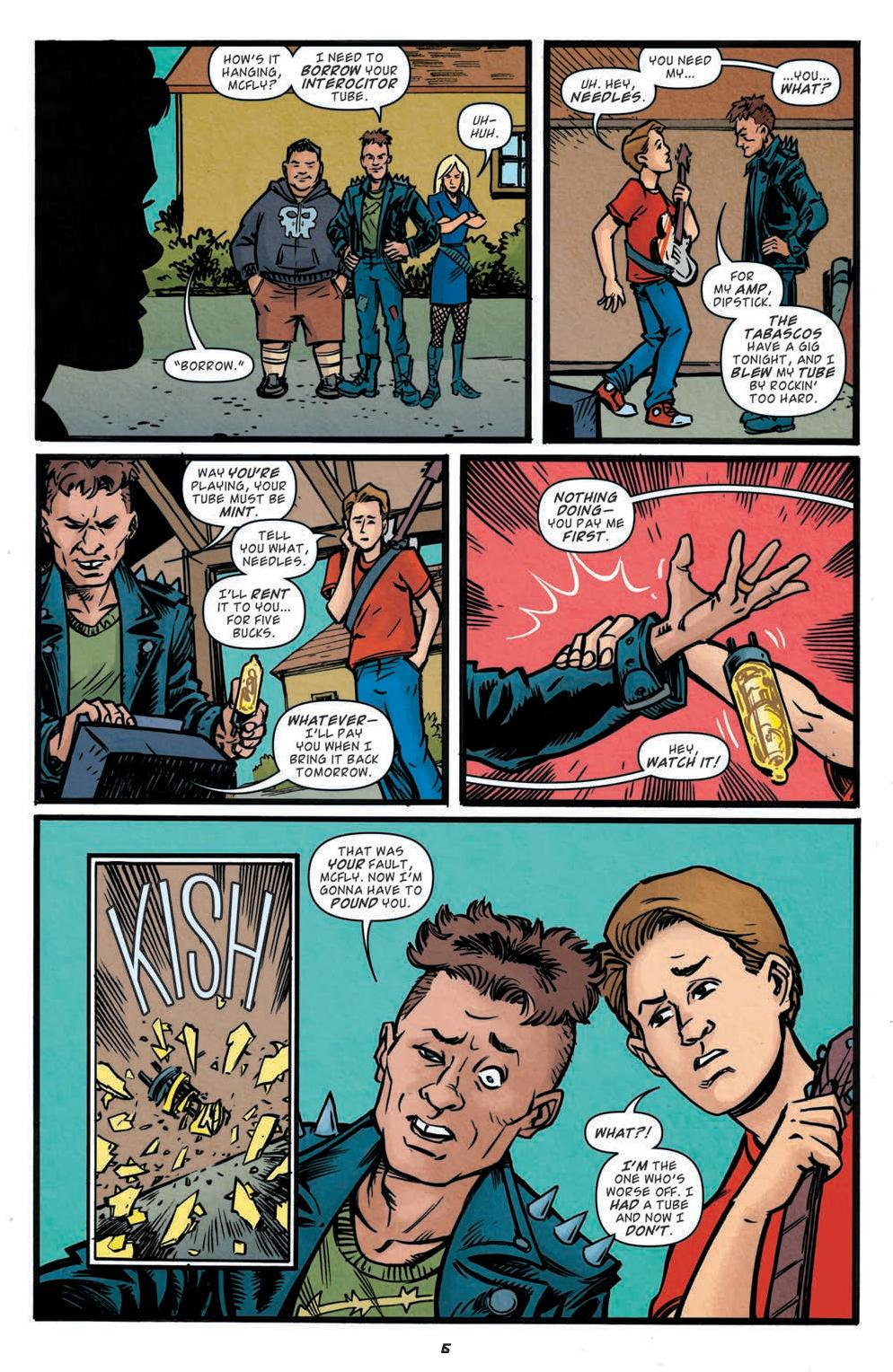 Much like the films, Gale delivers a story that is fun for all ages in [easyazon_link identifier=”B015EVKMN4″ locale=”US” tag=”bounintocomi-20″]Back to the Future #1[/easyazon_link]. But the antics and plot don’t quite make for a fully formed narrative. It’s quite likely that these stories may be fleshed out a little more over the five issue run of this miniseries. It doesn’t quite hit 88 miles per hour, but lightning doesn’t always strike the same clock tower, and it’s just enough to get to spend time with these characters again. Hopefully we’ll get some better development in the following issues. It’s only a slightly rocky start, but where we’re going we don’t need roads. Happy reading!