We had the pleasure of talking to Jeremy Hauck about his upcoming project No Wonder as well as ask him how he handles social commentary in his writing and manages to inspire our inner child’s curiosity while still writing for a mature audience.

BiC: Hey Jeremy, thanks for taking some time to talk with us about No Wonder. The main character is Turner Lane, who has grown up in a world where everyone is connected to each other and the information around them. Can you tell us a little bit more about this world? Is it somewhat like The Matrix?

Jeremy: Of course, and thank you for being interested in our book!

The mystery of our world I think is what makes it special. I can’t dive too much into this world without ruining it for our readers, but what I can talk about is the thought-process behind it. If there was a device that gave everyone immediate access to all of the knowledge we cultivated as a society, as well as connecting us to each other, how would that impact our society as a whole? What would the ramifications be? There wouldn’t be any point in schools, right? What about the economy? What happens to our creativity if we theoretically know everything the person next door does? I knew I had to answer most, if not all of these questions in order for our audience to buy the concept.

The Matrix was definitely an inspiration in some ways, absolutely, but we tackle the idea of connection at a much different angle as well as focus on mystery a bit more. No Wonder, to me, is “Lost meets The Matrix,” with a dash of Firefly in tone. 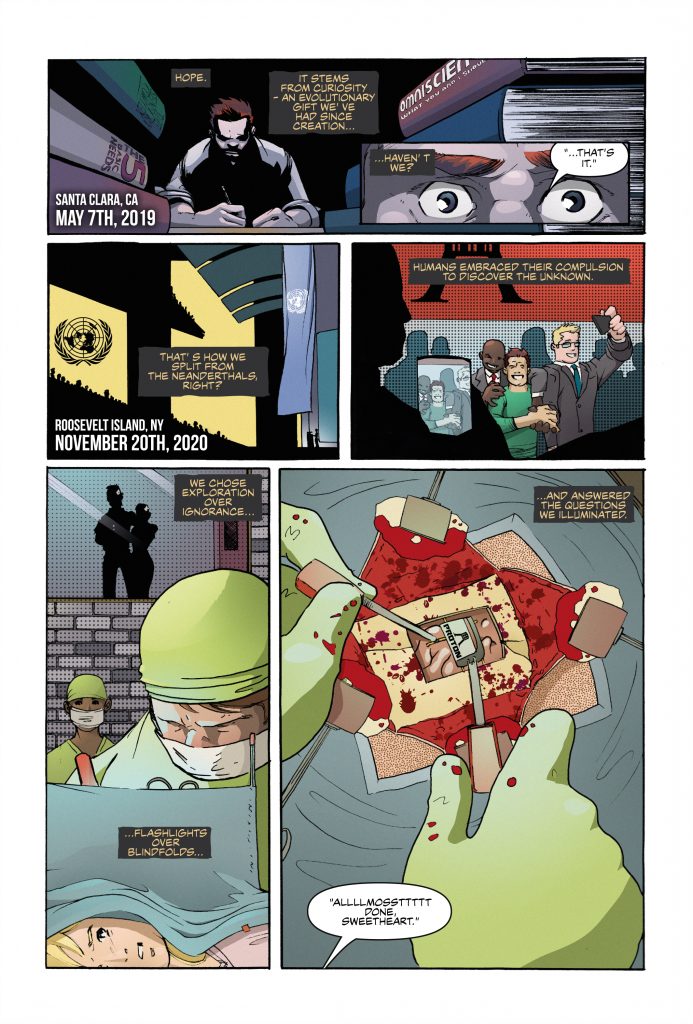 BiC: Once Turner becomes disconnected he discovers the world is really stagnant. What can we expect to see in this stagnant world? Buildings crumbling and falling apart or is it more nothing new or imaginative is being produced?

Jeremy: A little bit of both, actually. Turner’s story – the story we’re telling in our first arc – takes place in Vancouver BC, Canada, so I can’t speak on the entire world’s situation right now without spoiling too much, but I’ll describe what Turner will wake up to.

The buildings are decrepit and dirty. Hanging above them are advertisements, dated and showing their age with dust and tear. And yet, through the dark grays and browns that mask the cityscape, the streets below are filled with healthy crops, lit by colossal lights above, jerry-rigged and poorly constructed. Turner will explore this mysterious city in our first issue.

BiC: What are some of the struggles or challenges Turner might face in his search of something wondrous?

Jeremy: I think I need to be a bit cryptic to answer this one without spoiling too much.

In a world where certainty is a necessity, anything outside of that isn’t. Turner, falling into the second category, will encounter people that support the first and will do whatever they can to protect it.

Fortunately for Turner, he’ll have a supporting cast that will help him through those challenges he’ll face and I can’t wait to introduce them in sequential issues.

BiC: The inventor of the technology that has connected everyone is Calvin Tice, can you give us any details on what kind of role he will play in Turner’s journey?

Jeremy: Around the time Turner was born, Tice introduced a device to the world that would forever change it. He literally built the last tool our world considered we’d ever need as a species. Our story focuses on the aftermath of that launch 16 years ago.

Turner will definitely cross paths with Calvin down the road and how he fits into the existing world, but right now, I can’t say how that interaction will play out. 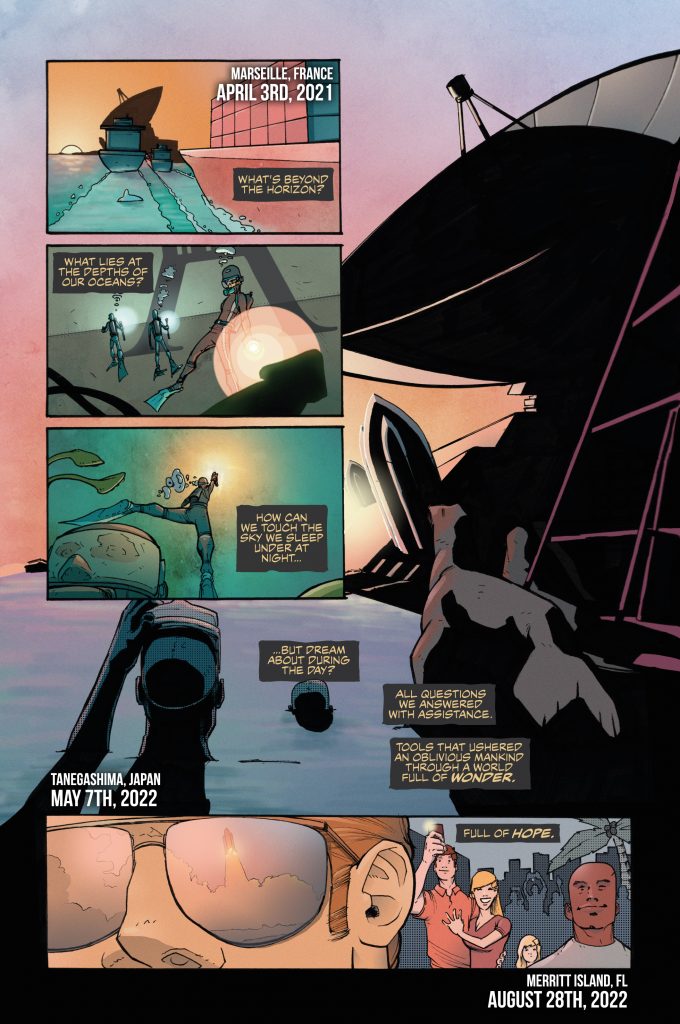 BiC: You have described it as a love-letter to our younger, more curious selves, but are targeting a mature audience. How do you strike that balance?

Jeremy: Within the mature language and violence that’s shown in our story, there is also some innocence that shines through. Even when things look depressing or gloomy in our story, I want Turner to be a reminder of the a time when we asked questions with an optimistic outlook, no matter how blind or ignorant it may have been.

BiC: The book is heavily centered around technology much like our own world, does the book plan to comment on our own society’s use of technology?

Jeremy: Absolutely. It’s not exactly our core message, per se, but there is definitely some subtext in there about our “constantly-connected” society and how damaging that can be to social behavior if it reaches an abnormal level. I want our story to focus on the mystery of the unknown and how we should embrace the feeling of curiosity, rather than fear the possibility of not being up-to-date.

BiC: There has been quite a bit of controversy surrounding Captain America: Sam Wilson #1 and writers interjecting their political beliefs into the stories they tell, how do you make sure your social commentary doesn’t come off as heavy-handed or do you not worry about this?

Jeremy: Luckily, I don’t think our story is tackling that controversial of a subject. We’re all aware of the positives and negatives technology imbues in our culture and the social behavior that derives from it.

But hey, let’s just say someone finds our message to be controversial, or feels personally offended. I’d probably apologize – since that was never my intention to offend anyone – but I’d also say it’s the story I wanted to tell. Whether or not you agree with the team behind Sam Wilson #1, it’s the story they wanted to tell for that character. We’re not news anchors, we’re storytellers – our books don’t have to be objective, they just have to be entertaining.

BiC: Your working with Ellis Ray III on this project, how did you guys meet and what caught your eye about his work?

Jeremy: After looking for months for the right artist, I found a post Ellis made in the subreddit, r/comicbookcollabs, and how he was available for work. I dug through his portfolio and his style was unique enough to get my attention. 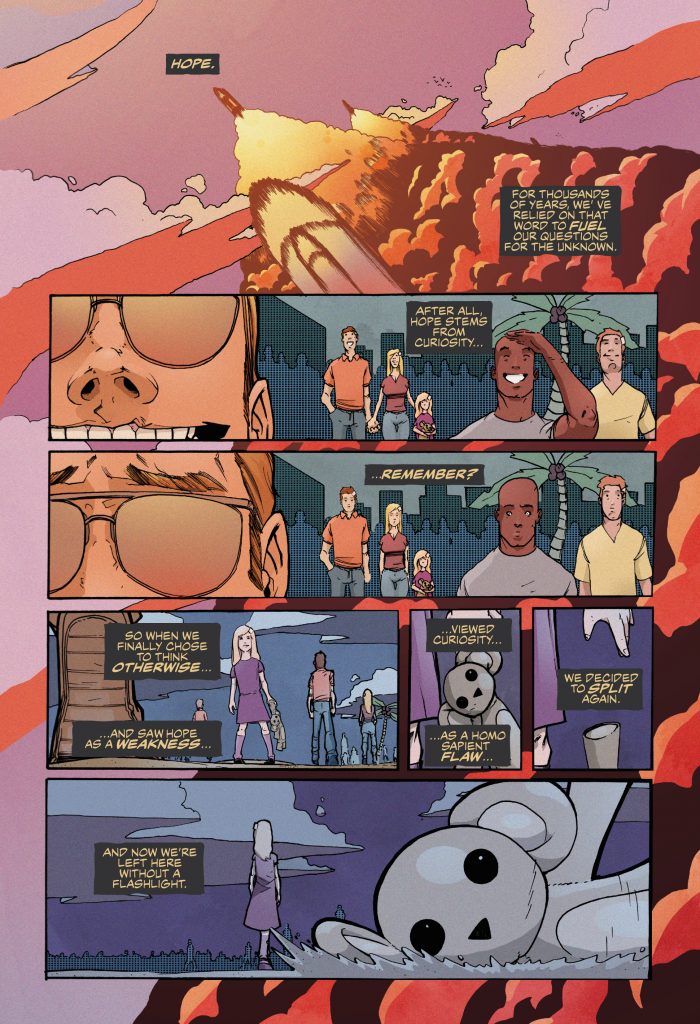 BiC: What is your process like? Do you let him take some creative liabilities with the script?

Jeremy: As a director of any project, you need to make sure that influences from those working on the project – as well as others looking in – doesn’t affect the central/core idea. You will never be able to please everyone; make sure your original concept doesn’t lose its integrity.

However, if you’re a good director, you’ll know when to let the right ideas come in and improve the overall project. Fortunately for me, Ellis has many of them. After he’s read the script and we’ve gone over the layouts for each page, he brings my words to life with his inks. There are times when he suggests a better “angle” to the story to give it more emotion, and I welcome it every time he does!

But I think the biggest influence he has in No Wonder is the flair and intricate details you’ll see in our pages. The smallest details can go unnoticed when writing the script, but Ellis remedies that with the little touches he puts into the background.

BiC: Finally, how do we get our hands on No Wonder?

Jeremy: I’d say the easiest way is to preorder a copy through our Kickstarter, which launched November 5th. If we hit our goal, the digital copy of our first issue will be sent out before the year ends!