We chatted with Australian N. S Kane about her upcoming project Seamstress involving two estranged sisters who craft the best outfits for the superheroes and villains. We also got to touch on what the comic world looks like Down Under. Hope you enjoy reading this as much as I did asking the questions!

BiC: Hey, thanks for taking the time to chat with us today about Seamstress. Could you tell us a little bit about Seamstress? It’s about a pair of sisters who make clothes for both super-powered heroes and villains?

N. S Kane: Yes, Cassi and Polli are two seamstresses’ that work for either ends of the super scale, creating the super suits that the titans of the modern age are adorned in. The estranged sisters start to form a relationship after Polli and Cassi are exposed to the public. Uncovering the hidden truth, a power struggle ensues to see whose costumed champion reigns supreme but the temporary peace which concludes is at the terrible cost of Cassi’s eyes. Cassi only wants her family while Polli claws for fame and glory and when the secrets of the past creep up, the truth about their abilities forces the girls to face a horde of other creators. Testing the costume magicians in their skills, these troops reveal more about their manufactured history. With heated hairdressers, tactful tattoo artists, crazy cobblers and malicious milliners at every turn, the girls have no choice but to join forces and finally become their own champions.

BiC: This is an awesome idea and it reminds me of Edna Mode from the Incredibles a little bit. Where did the inspiration for this comic come from?

N. S Kane: Hahaha I get that a lot! And my reply is always NO CAPES! Unless they are made by Polli. Yes it is very similar but unlike one person doing all the work, the girls are knee deep in a world where there are so many others that serve the heroes and villains behind the curtains making sure that they are perfection to the public eye.

The inspiration came from my partner as she is the actual seamstress. When I was sitting in my lounge with a friend, he turned around while watching her run back and forth carrying cups of coffee and said “you are a human sewing machine that runs on coffee.” At that moment I bolted to the computer and started writing, two years later Polli and Cassi were born.

BiC: Speaking of Edna Mode will there be capes?

N. S Kane: HA! Yes many many capes!!! There is one point where Polli is at a fashion show and every model is wearing a cape! The result is hilariously wrong. 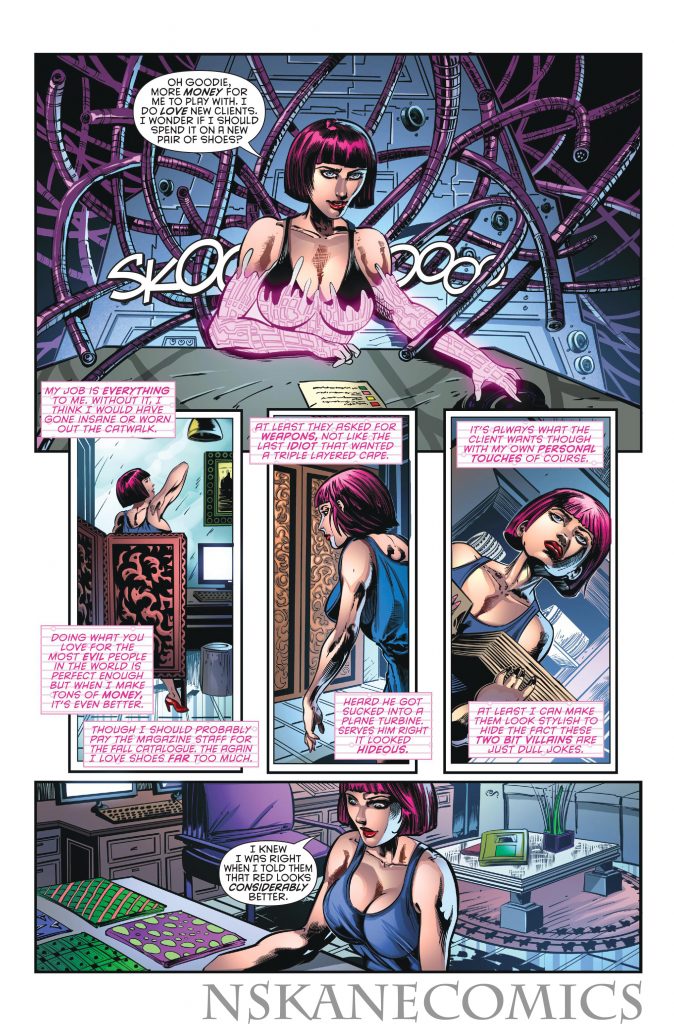 BiC: What can you tell us about the sisters, Polli and Cassi? Will there be some cat fights or is everything all lovey-dovey on the home front?

N. S Kane: God no! Polli hates the idea she has a “lesser” seamstress that she is now being compared too, not to mention that she finds out they are related. Unfortunately Cassi wants to connect with what’s left of her family and tries desperately to connect but that cost comes with a terrible price.

BiC: If they are such key assets to the heroes and villains of this world, how do they manage to protect themselves if say a villain wants to destroy their arch-nemesis’ special suit?

N. S Kane: Ah that was a question I had come across when writing. Polli is really the only one that deals with villains as either side thinks that only one seamstress existed. Cassi was never in any danger until she was exposed. Polli holds her own though as at the end of issue one, a client dares to call her work that of a “Fashionista” and she shoots him point blank for it. There is however, someone higher than the two girls but I won’t give all the surprises away.

N. S Kane: Again Polli doesn’t play well with other children. She picks huge fights in public with the hairdressers; she finds the cobblers creepy and backstabs the milliners at any chance. She’s very much in the game for herself unlike Cassi who is shy and prefers to communicate with her compatriots via email rather than in person. She’s polite and tries to keep the peace with others as she knows she needs them to complete her work. Though the real random piece in this chess game of life, is the Tattooist. He’s the middle man on neutral ground and his relationship with the girls will be the most interesting of all so I can’t wait for readers to meet him. 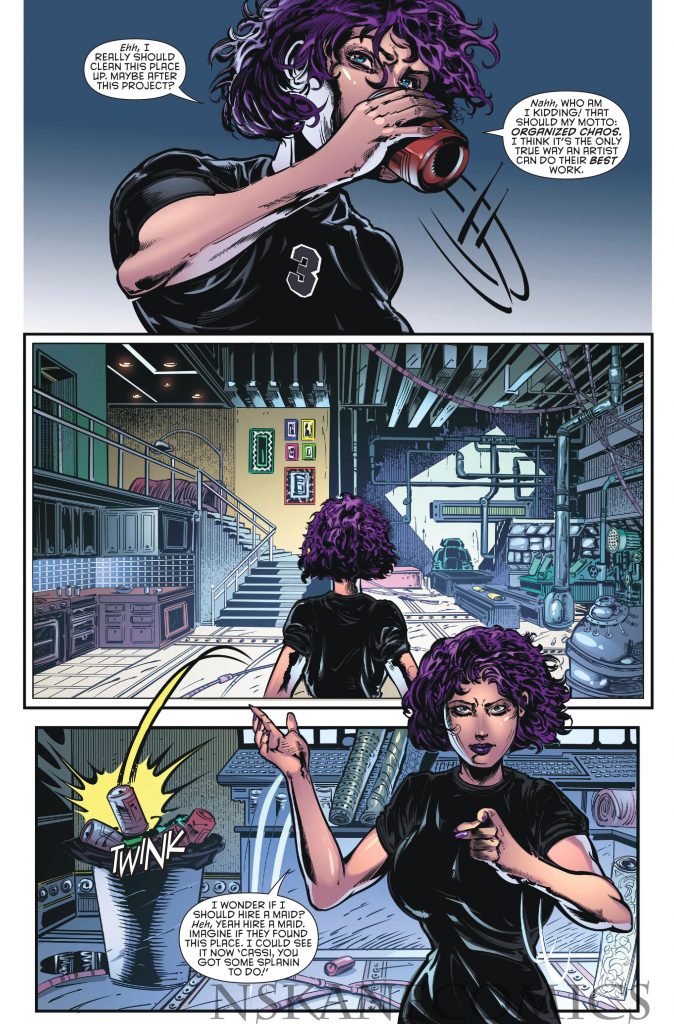 BiC: Let’s switch gears a bit. Federico Zumel, who is absolutely fantastic, is doing the pencils. What is it like working with him? Are there any specific processes you have in place?

N. S Kane: Dear god he’s been incredible as has my entire team. He’s like lightening with a pencil and as soon as I hand him the script, he just plucks the images straight from my head. I gave him a lot of artistic licence with the work and when each page is done he sends them over straight away for me to approve. I couldn’t imagine anyone else bringing Seamstress to life the way he has.

BiC: Can you tell us a little about yourself? How did you get started in comics?

N. S Kane: Oh this is a funny story; believe it or not I have only been into comics for a few years. I started writing novels when I was about 15 but as I was told I wasn’t good enough to be an author, the works never really went anywhere. Then in my 20’s I was a nationally ranked cosplayer down here in Australia but after politics and bad sportsmanship got the better of me I wanted to cosplay for fun and not for glory. So my partner had been sitting in front of the computer one night looking for something that was black and red to cosplay for fun. That’s when we stumbled upon Batwoman. From that moment on my life changed, I couldn’t eat up enough of the story and then when she showed me what comic scripts looked like, I said hey I can do that, I can write like that. And that was it; I sat down started messing with formats, doing my research in comics writing, the history behind it, the structure and the passion. From there, I have never looked back and I know without a doubt that this is what I want to be doing for the rest of my life.

BiC: For us here stateside comic books have gone mainstream in pop culture, what is it like in Australia? Are they still a niche industry?

N. S Kane: Ha no! We have almost nothing down here for comic aspirers. Sure, there are the usual stars at conventions but in Sydney alone there are only 4 comic book stores in total, plus the one we regularly visit in Newcastle. But we have only one publisher here who refuses to take new works on board and that’s all. It’s almost non-existent and with people like me trying to break in we have no choice but to cross the ocean and see our friends in the north. I think this only makes us stronger to prove that we do have the talent and given the opportunity we can be a driving force in the comic community. 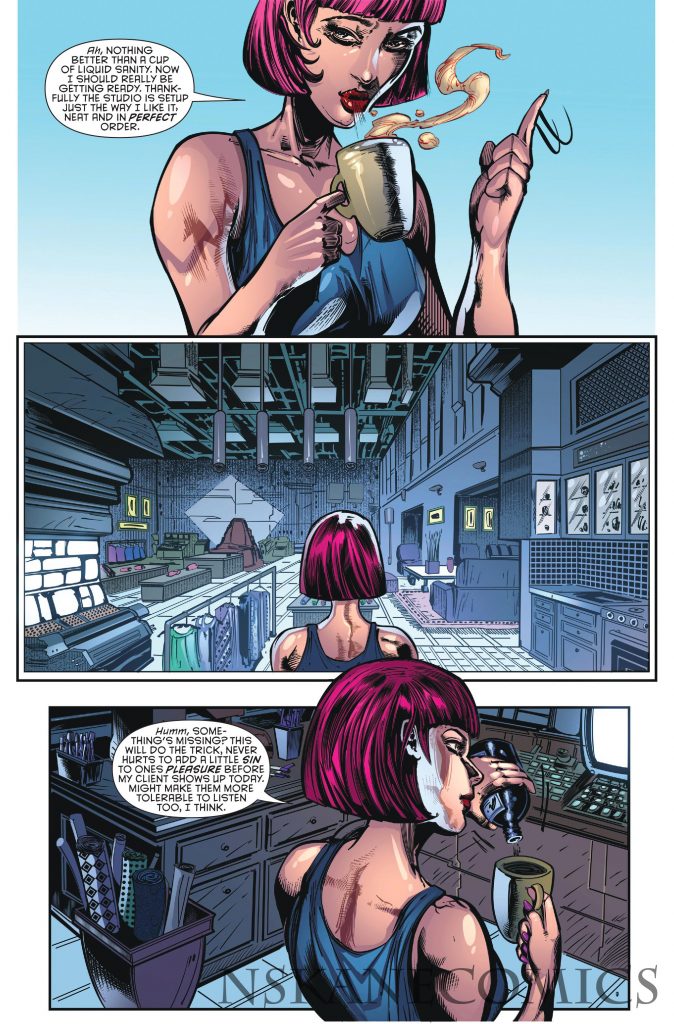 BiC: Two more questions! How do we get our hands on Seamstress?

BiC: And lastly, if we want our own superhero suit how can we get one of those? Are Cassi and Polli taking orders?

N. S Kane: Well the Seamstress herself Kate Candy Kane does make custom outfits so you are more than welcome to ping her online and make an order for anything from Batsuits to dresses to tailcoats and yes even you’re very own cape! She will even put your very own Seamstress tag on the garment of your choice.