After a strong second issue, Brian Haberlin’s sci-fi story is beginning to find it’s rhythm. The crew is still being menaced by the tendrils that had followed them off the newly discovered planet Ouroborous. The crew is literally in the dark in the first page, as the dark entity has encircled them. How does it fare?

Through evasive maneuvers they discover that the tendrils are feeding off the heat from the ships engines. So the new science officer comes up with a plan to pull the old bait and switch. What keeps it all interesting is the political/bureaucratic intrigue that plays out during the rest of the action. The captain is called away in the middle of the chase to speak with commanding officers on Earth. This is where we get teased about all the mysteries left in store as the captain is torn between sharing mission knowledge with the crew, and his orders to compartmentalize the classified info on a need to know basis.

Haberlin’s illustrations are more than a competent match for his story telling. Although facework and expressions seem a little strained, his consistency makes it easy to distinguish the many different crew-members. Though, it would be really helpful if we could get a roster or character page. But it is Haberlin’s foregrounds and backgrounds along with Dan and David Kemp’s colors that make this series truly a beauty to behold. From the expanses of space to the confines of the cockpit, each rendered set piece has a hyper-realism that makes it easy to stay engaged. 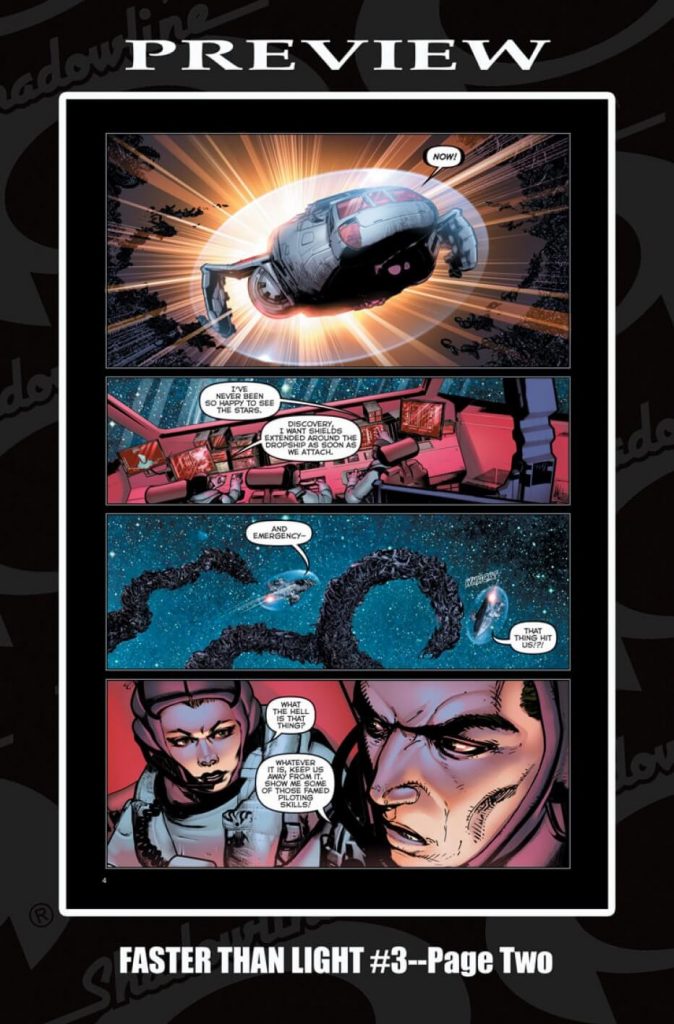 But what I really want to examine is the amazing Augmented Reality experience. I had bypassed this feature entirely when I read the first two issues. I chocked it up to gimmickry, and the few times I’d tried something similar in a Marvel book had been unsuccessful. But before reviewing this issue I figured I should at least give it a shot. So I downloaded the free app from iTunes (also available on Google Play) and tested it out. It’s easy to use, and self-explanatory. Just allow it access to the camera, select the issue you’re reading, find one of the enhanced pages and point your phone, and voila! Magic.

The cover of issue #3 pulls up an 8-bit side-scrolling game in which you fly the landing craft through the mines depicted in the previous issue. Most of the pages pull up a holographic figure that appears to hover right above the page. There are equipment specs, character bios, interactive weapons checks, and captain’s log entries that add context to the story line. One of my favorite aspects was the menu soundtrack, which is perfectly creepy. 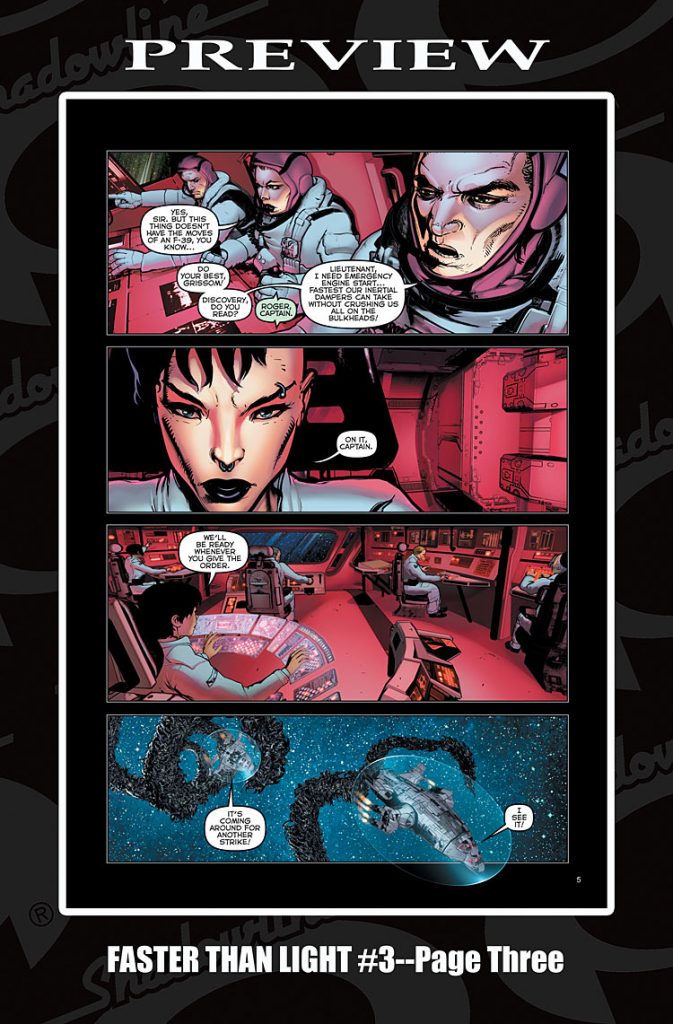 [easyazon_link identifier=”B016X09FUQ” locale=”US” tag=”bounintocomi-20″]Faster Than Light[/easyazon_link] is worth checking out for the AR experience and art alone. But it has real potential to explore many of the same tropes of the sci-fi horror genre that makes us fear the unknown in the cold and the dark, and all the ways that we can die in space.