We got the chance to sit down with 44Flood and Victorie City creator Keith Carmack to chat about his upcoming title Victorie City, the challenges of an upstart publisher, and an update on Ben Templesmith’s Dagon.

BiC: Hey Keith, thanks for taking the time to chat with us about your upcoming project Victorie City. It caught my eye when I was putting up the IDW solicitations for January. It’s a crime noir with mystery, horror, and a supernatural twist?

Keith: Thanks for having me! Yeah, it starts off with the classic noir detective story tone but then we add a supernatural element a little later on. I was really thinking about Elektra: Assassin. It starts off with Frank Miller’s brooding inner-monologue and you think you know what this story is. Pretty soon, things start getting weird and the whole thing explodes! That’s what I was hoping to achieve with Victorie City.

BiC: The solicitation images from both Ben Templesmith and Vincent Nappi depict an extremely dark city, that may even rival Gotham with its grim tone. What can you tell us about the city itself?

Keith: It’s a corrupt city. When you look at Ben’s cover you see Brahm Allvar, our villain, looking right at home in it while Hektor seems to be surrounded by it. I guess instead of the people being a product of their environment, the environment is a product of all the wrong going on with the people. 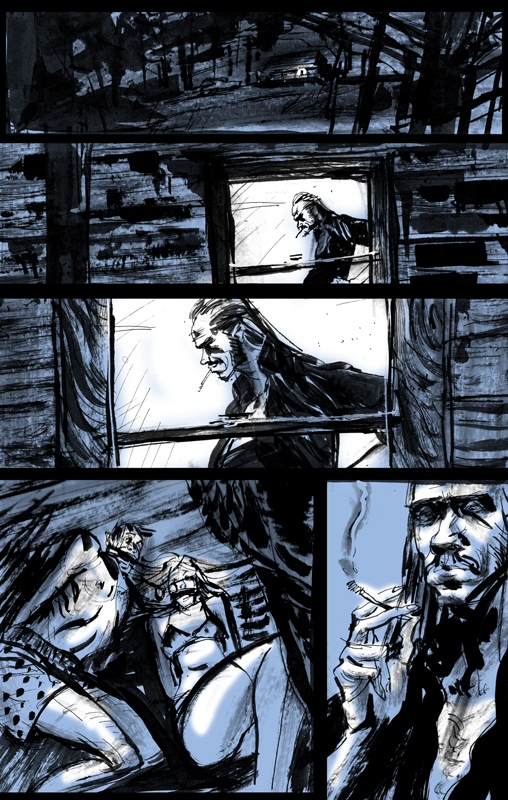 BiC: If the city is a product of the wrong going on with people, will we also see some of that wrong inside Detective Ness? Is he a flawed character?

Keith: Definitely. He is put in a really tough situation and has to blur the lines of the law but, ultimately, it’s for good reasons. He’s fairly similar to how Jim Gordon is portrayed in Gotham. Gordon has had to do some questionable things there, but it’s for a greater cause.

Keith: Whoa! I never noticed that. When we were coming up with the look of the character, I saw a younger Daniel Craig but Vincent saw Steve Mcqueen so he tried to meet those two somewhere in the middle. By the way, Steve Mcqueen the director is NOT Steve Mcqueen the actor. In fact, they may be complete opposites in every way including the part where one of them is dead.

BiC: So which Steve McQueen is it? The actor or the director? 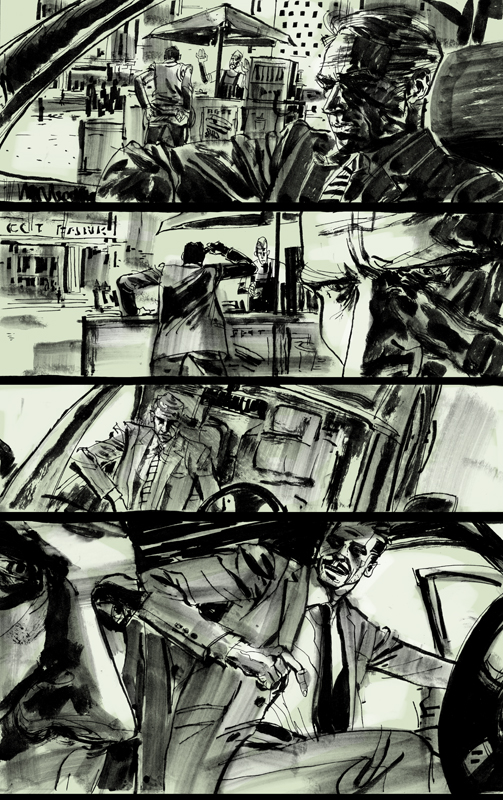 BiC: Currently the book is slated as a four issue mini-series if the book sells well do you have further stories planned in Victorie City or about Detective Ness?

Keith: AND the entire book is already illustrated so there’s no chance of a delay. I have a trilogy of Victorie City stories mapped out that I hope IDW will let me do. There’s no cliffhanger at the end of this one, though. It’s a self-contained story. It’s just hard to do all this world building and not want to go back there. While I was writing this one I kept coming up with more ideas but no room to pack them all in so I came up with a plan on how to do additional volumes.

BiC: Victorie City is also a 44Flood book being published by IDW. For those who don’t know can you tell us who 44Flood is and how the relationship with IDW works?

Keith: 44FLOOD is Ben Templesmith, menton3, Kasra Ghanbari, and myself. We’re an artist collective and publisher. We’ve made some art books, some comic books, put on some gallery shows, things like that. We’ve been able to use Kickstarter to make our projects happen, after some successful launches we were able to strike up a deal with IDW to distribute some of our books. 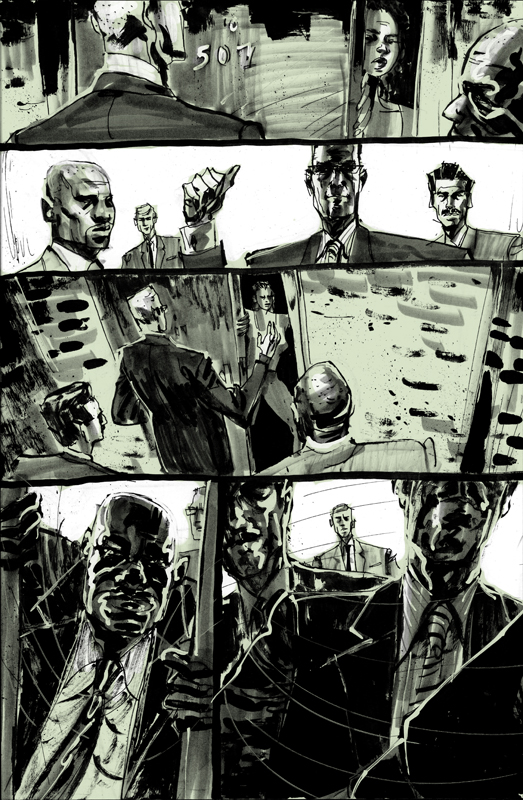 BiC: Not only are you publishing your book through 44Flood, but you also are employed there. What are some of the most difficult challenges you face in bringing a comic to market?

Keith: Finding an artist was tough. I didn’t know who was going to illustrate Victorie City until I went on a trip for 44FLOOD to meet with George Pratt about getting him back in the game. (SIDENOTE: If you don’t know who George Pratt is, he has hero status among artists. He does these paintings with rollers that are like a religious experience.) George likes to teach and had this student he wanted to introduce us to and it ended up being Vincent. He showed us these fashion illustrations he was doing that were real sexy and European. He said he was hungry to do some comics so I asked him to do mine. I got lucky. If i hadn’t met him I might still be looking for an artist.

BiC: 44Flood is also working on a new Ben Templesmith project, Dagon, that was successfully KickStarted earlier this year. Do you have an update on when we can expect to get our hands on it?

Keith: Totally. It’s super-close to being shipped, I signed off on the first round of proofing myself. Now we just have to look at a copy of the finished product, they’ll do the print run, and send the books out. The art is amazing on this one. It’s some of Ben’s best stuff. I don’t know how he does it, he keeps getting better and better.

BiC: Aside from Dagon and Victorie City, what other books can we expect to see come out of 44Flood in the next year?

Keith: We’ve got SALEM. That’s an art book with Damien Echols, menton3, and David Stoupakis. I believe an anthology book from George Pratt, one of the projects we talked about on that trip, is almost ready. And right now Kasra is Kickstarting an art book with his longtime friend Scott Radke which will show his art over his entire career up to now. 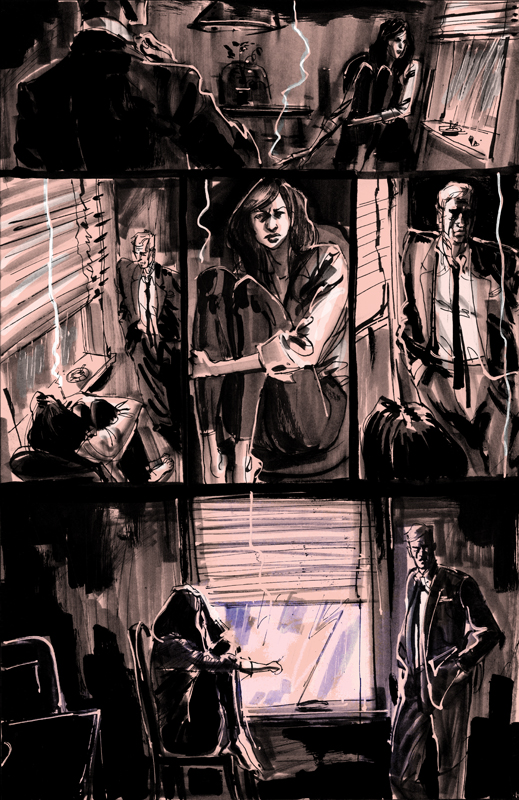 BiC: Lastly, if we want to stay in touch with you or find out more about 44Flood and Victorie City what are the best places to reach you?

Keith: Victoriecity.com has more details on the book and you can find me on Facebook and Twitter at /keithchaos

BiC: Thanks Keith for chatting with us! It has been a real pleasure and I can’t wait to pick up Victorie City in January!

Keith: Thanks much! …get both covers!