The witch Haggar has returned to Arus with not only a new army of Robeasts, but a well-trained conquering army as well. With the return of this threat, the Monastic Order of the Lion chooses their new Voltron Team. Will they be able to stop Haggar and her new allies? How does it fare?

Voltron: From the Ashes #3 is really two separate stories at this point. Cullen Bunn weaves in flashbacks to the last battle Voltron had against Haggar and her Robeasts with the present-day story of Haggar returning to take her vengeance.

The flashback story is where all of the action is and has been occurring for most of the series. Voltron combats Haggar’s Robeasts and is pushed to its limit. However, Voltron being on the edge of defeat for three issues in a row can become a little repetitive. What makes this even worse is the apparent damage taken in the preceding issues is not apparent in this one and only the damage suffered in this issue shows up. When Bunn writes, “We’re bleeding fuel!” or “We’ve got reactor leaks!” I want to see that type of damage on the page. Instead, Voltron looks in tip-top shape; even the paint job doesn’t look like they have been fighting for their life.

In the present time line, the chosen Voltron Team psyches themselves up about their mission, but also keep a level head understanding Voltron hasn’t even budged in years. One interesting development is Bunn’s characterization of the Black Team’s leader, Jayce. Bunn had been building him up in a certain direction but, due to the return of the Robeasts, he has become enlightened and understands his faults and has some deep regrets. What makes this characterization really stand out is how his team reacts around him. You can finally start to see some chemistry! Although, he has some awkward dialogue when they start telling each other personal stories and some of the team doesn’t participate. I mean, “I don’t have a story to tell. Sorry.” just comes off as forced and absolutely unnecessary. 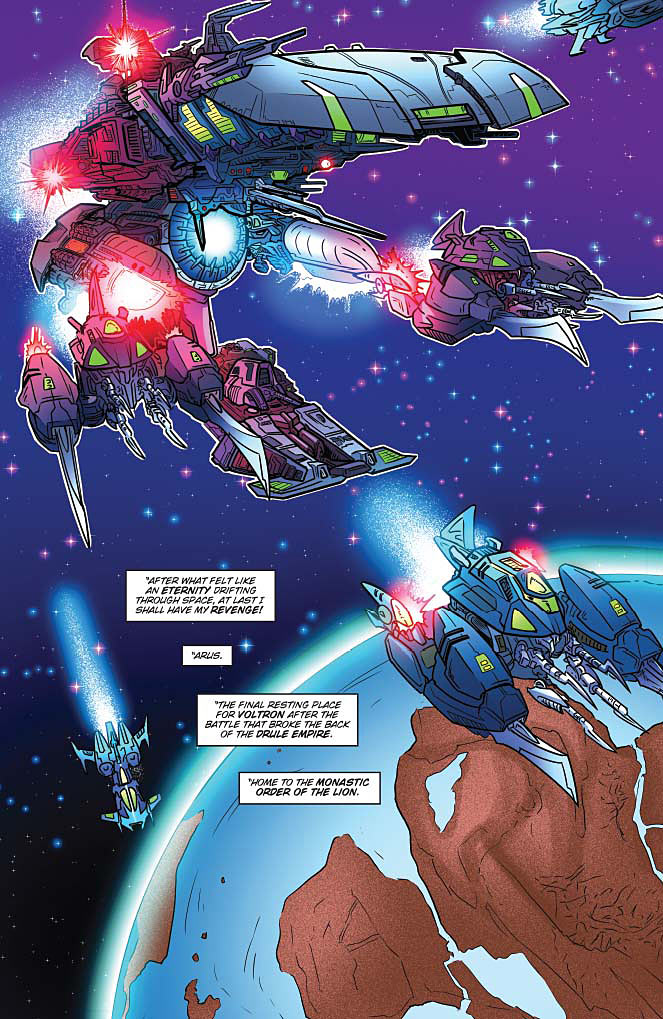 In addition to this poor dialogue, there are also some plot holes where you have to imagine what happened to the Red Team. They go from preparing in the sanctum, to somehow appearing on the field of battle, and then miraculously showing up outside the Academy before the approaching enemy troops. It is a little too much to believe.

Blacky Shepherd’s artwork was an improvement over the last installment despite the lack of damage seen on Voltron and the team members. The combat sequences were chaotic, as they should be, but it was clear what the Voltron Team was doing and how they were combating the Robeasts. I was disappointed he didn’t include a panel of the separate Lion units coming together to form Voltron, but hopefully we get to see that in an upcoming issue.

The character scenes were well done. You could feel the emotion rolling off Jayce and his team as well as the steady focus coming from the Red Team as they prepared for the upcoming battle. The last page was very well done, depicting the sun in the background rising above a statue of Voltron with Jayce standing looking out in the distance. It just evokes hope and a coming dawn, but the challenge ahead is vast and the responsibility on his shoulders enormous. 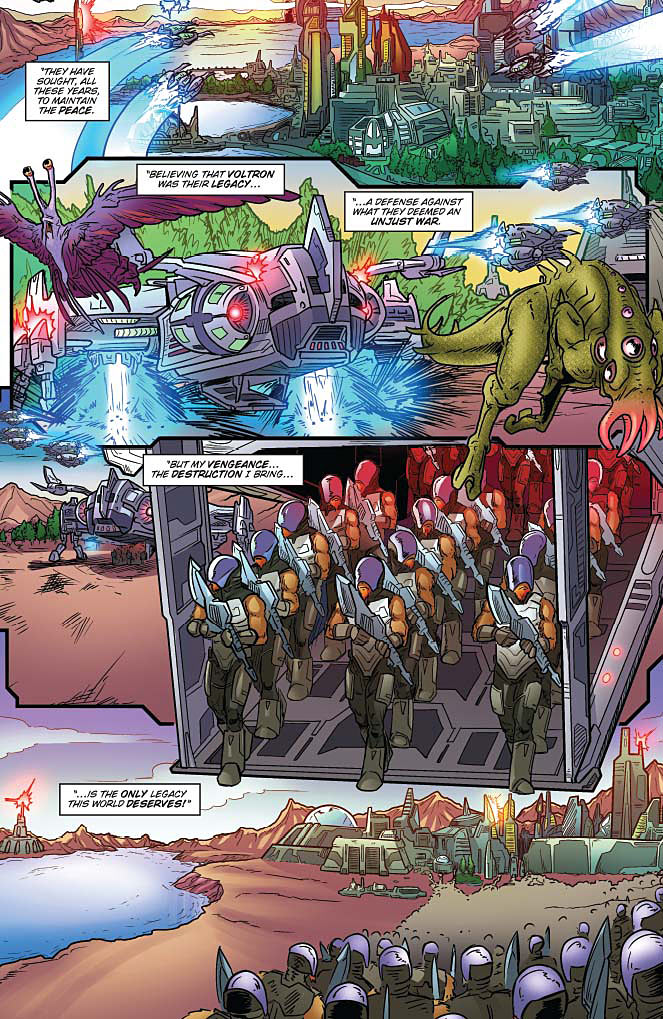 Voltron: From the Ashes #3 is a very rough transitional issue where the conflict that has been building up has finally arrived even though no action has been taken against this foe yet. There are a number of plot holes and some poor dialogue. Bunn’s characterization of Jayce and his team is decent, but not enough to make this book worth purchasing. Blacky Shepherd’s panels are improved from the previous issue with easily discernible battle sequences and some strong emotional scenes with Jayce and his team.