Thor has returned to Asgard, but unbeknownst to him he is stalked by Regn and his daughter Drifa, who aim to end Odinson for good. Meanwhile, Surtr’s forces gather in order to accomplish the same goal, while the Lord of the Dead makes his own plans. Will Thor be able to survive? How does it fare?

[easyazon_link identifier=”B019NTU6GQ” locale=”US” tag=”bounintocomi-20″]Ragnarok #7[/easyazon_link] not only sets up the beginning of this new story arc, “The Games of the Gods” by introducing new characters and plot elements, but Walter Simonson also throws a shocking twist into the story that will catch you completely off guard.

The book doesn’t start off very well. On the second page, Simonson lays out the page so Thor looks as if he discovers the two dark elves, but the following pages and panels completely disregard his apparent discovery. It is quite baffling; the entire page feels completely out of place.

Fortunately after this mishap, Simonson lays out a story that flows very nicely. It is such a quick read. I was still trying to flip the page when I got to the end. Making it such a quick read was Simonson’s dialogue. In some instances he is able to subtly incorporate some humor, but for the most part it is very terse and to the point. While this can make for a quick read, it can also leave you in the dark on a number of plot details. You are also left pondering why Thor makes certain decisions that seem to go against his character or are, at this point, unclear. 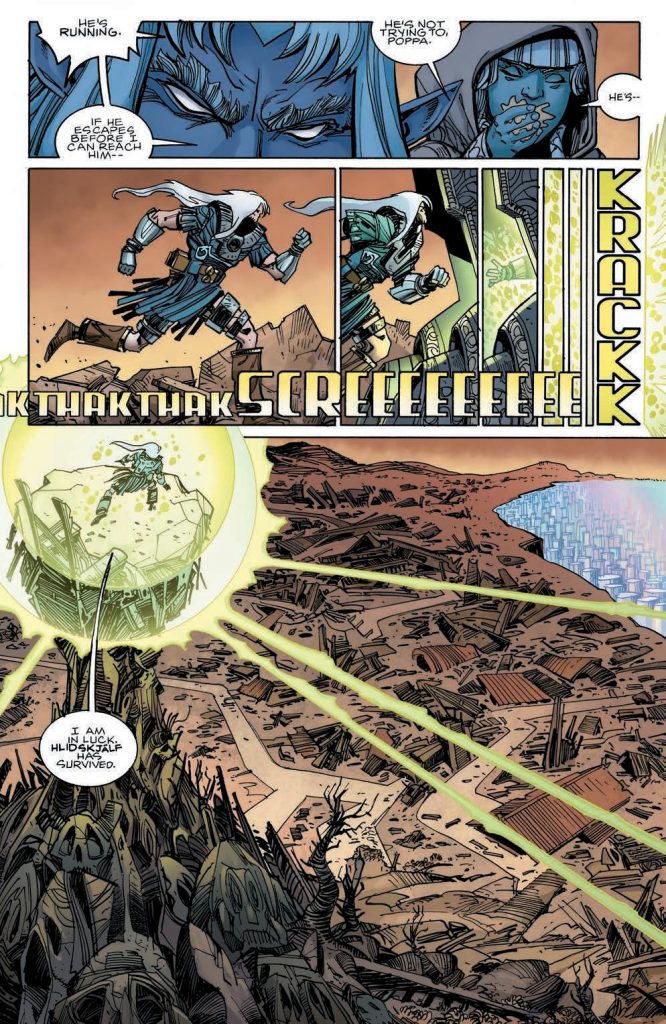 Simonson does attempt to explain Thor’s actions through some exposition detailing the history of a certain object, but the parable was really unclear and didn’t truly explain the curse applied to the object. It really needed to be clarified because it is integral to understanding the decision Thor makes.

Aside from Thor, Regn, and Drifa, Simonson also introduces a new character, Rungnar, who appears to be taking on the role of a new rival or villain for Thor. We only get a couple pages introducing him, but the introduction is impressive as he easily dispatches draugr as quickly as Thor.

Simonson’s artwork is what we have come to expect, very rough, mimicking the desolate and brutal post-Ragnarok world he has created. There was one panel depicting Thor running that was pretty awkward. His legs appear to be in a straight line rather than having hips that separate them. The action scenes were a lot of fun; I especially enjoyed watching Regn slice through a bunch of draugr. Simonson highlights his speed and quickness with a number of slice marks through the air. 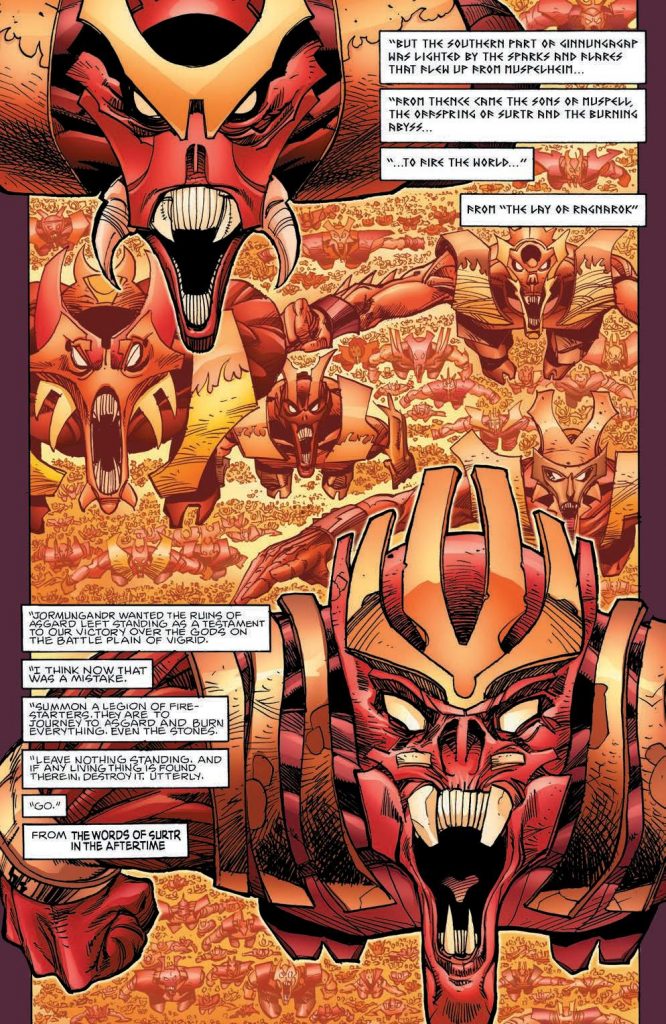 John Workman’s lettering was for the most part spot on. I enjoyed his large “KRACKTT” when Thor is teleporting within Asgard or the “BOOAUM!s” when Thor attacks with Mjölnir. However, during the battle sequence with Regn, he decides to add the sound effects on top of a white background instead of on the artwork. It is extremely odd because in adjacent panels he has the sounds effects on the art. It really drops you out of the action and distracts you from the combat.

[easyazon_link identifier=”B019NTU6GQ” locale=”US” tag=”bounintocomi-20″]Ragnarok #7[/easyazon_link] begins the new story arc in decent fashion, introducing a potential new villain, an impending massive conflict, and a shocking revelation. However, the execution is not up to par from poor lettering decisions that drop you out of the action to poorly explained exposition leading up to the shocking revelation. It adds up to a book that just isn’t that good.