[easyazon_link identifier=”163215546X” locale=”US” tag=”bounintocomi-20″]Starve Vol.1[/easyazon_link] hits the shelves January 13 and the sixth issue will be available just about a month later on February 17. We had the opportunity to talk with the comic’s creators, Brian Wood and Danijel Zezelj about Starve, what their inspiration for the story was, and what we can expect in the next arc!

BiC: First of all I should say using cooking reality TV as a medium for a dystopian story is really unexpected. What is the genesis of such a book?

Brian: It goes back a few years, and my desire to find a topic that I love (TV cooking shows) and that I could do a lot of research for. I was pretty into the whole “research to an inch of its life” thing, just having completed DMZ and Northlanders at Vertigo and seeing cooking as my next frontier. Over the years from then to now, I shifted the focus away from a very process-oriented story to one that really centers itself on this one character – Gavin Cruikshank – and the redemption he so desperately needs to find.

As far as my co-creators go, I had the pitch sort of gathering dust on my shelf when Danijel Zezelj asked if we could maybe do a new book together, and of the half dozen ideas I suggested, this was the one he wanted. Both he and I have worked with Dave Stewart before, so that was an easy call to make. It all came together really smoothly, and with all of us equal owners of the book, its very democratic.

BiC: Let’s talk about Gavin. Great character, I enjoyed the fact that he hates being a part of this but he LOVES doing what he’s doing. What struck me the most though is that his coming out is mentioned as the reason for his divorce but there never was a need to touch that side of the character any further. It was smart I think to make it just “one of many features” while many comics can be very pandering about their LGBT characters. Was that a conscious decision? Are there plans to explore that side of him further in the future?

Brian: There’s not a need to fixate on that one aspect of his personality beyond what we’ve done already (pertaining to his relationship with his wife), and I don’t really see it as a ‘feature’ of the book in the way you mention. I mean, not one in Starve has kissed, or fucked, or really done anything like that beyond some dorky flirting, so its not like I’m avoiding it either. Starve hasn’t really caught a lot of attention in the comics media for having an gay lead character as a result. That said, its not going to be completely absent from the book – we’ll pick up a few times with it in the next arc. 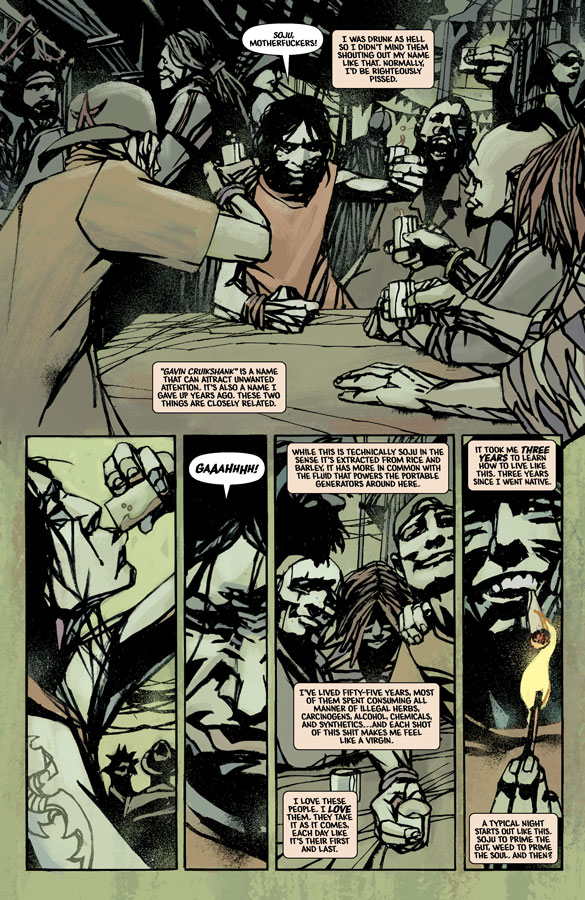 BiC: You’ve mentioned before (in Rebels) that you were a graphic designer before getting into comics, and that it played a part in the design and “packaging” of Rebels. Did something similar happened here in Starve?

Brian: With most of my projects I take a lead with the design, creating the logo, often art directing the cover illustrations, and setting the tone for the general look and feel of the book’s packaging. But since Danijel has such a unique and powerful visual style, I got out of the way and let his identity define the look of things, from the logo to the choice of cover and so on. I hired an outside designer to package the trade paperbacks for that same reason, so it didn’t have that stink of me on it. In terms of design, haha.

BiC: Danijel, I want to start by saying your style is a great fit for the book and the kind of universe it’s building. How did you came to be part of the creative team?

Danijel: For a long time Brian and I wanted to create an original series together, Brian came up with few proposals and I really liked the Starve plot and characters. A dense overcrowded urban metropolis is visually, a very inspiring setup for me, and especially with a plot dealing with social issues and inequality, reality television and celebrity chefs in a deeply divided society.

BiC: Some scenes can be fairly gruesome, and some recipes pretty outlandish, did you have to do a lot of research in order to bring all of this to the page?

Danijel: It is quite easy to do any kind of research now with the internet and YouTube. However there are things you cannot research online. When I was a kid growing up in Balkans, I witnessed butchering of pigs and sheep. It is gruesome, cruel, bloody business, and its smell and noise is a unique experience, way beyond anything you see on video channels.

BiC: Were there any particular influences or visual cues that helped you build the visual universe of Starve?

Danijel: As mentioned before, post-industrial urban decay is my favorite visual setting, and I already have quite an archive of visual references as well as years of life spent in New York and Brooklyn.

The atmosphere of the story with its darkness and shadows, resembles noir movies of 50ties, as well as earlier silent movies (German and Russian) from 1920ties. 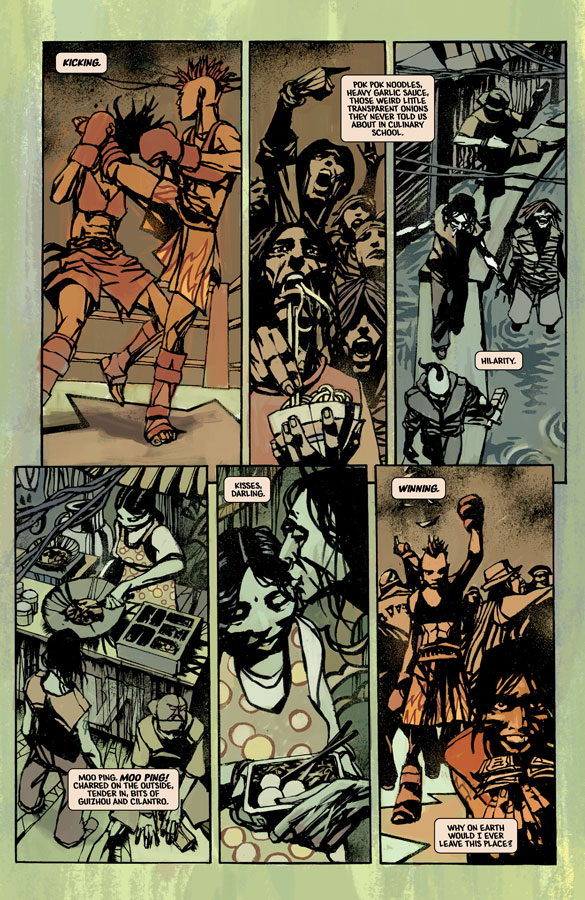 BiC: Brian, can you give us a tease on what’s next for Cruikshank? Do you have a release date for the next issue? Can you tell us what else you are working on at the moment and what’s coming up for you?

Brian: The first trade is out the middle of January, and we start back up monthly in the middle of February. I have a very blurb-y way to describe the next arc, which is that Gavin takes his food revolution from the soundstage to the streets. What that means in detail is instead of trying to subvert his own TV show – which is having limited results and he fears falling back into the trap of his own fame – he decides to affect change by going directly to the people who need it most: low income areas of the city, people living in “food deserts”, and so on. There’s story progression with him and Greer, with Angie – who becomes a big part of the next arc – and even his arch nemesis Roman.

BiC: Similar question for you Danijel, can you tell us more about what else you are working on and what is coming up from you in the future?

Danijel: My focus is still on the last episodes of [easyazon_link identifier=”163215546X” locale=”US” tag=”bounintocomi-20″]Starve[/easyazon_link]. I’m also working on a short animation movie based on my graphic novel Chaperon Rouge (Red Riding Hood) which I hope to complete in next 4 months.

And there is a couple of additional projects: a graphic novel about Franz Kafka in New York, and another original 4-6 issue mini-series.