Today, we got to talk with Justin Jordan and Jen Hickman about their latest issue of Spread, rape culture, and looking yourself up on Comixology.

BiC: Molly was introduced in the very first issue and she plays a very key element in the story but has always been shrouded in mystery. Did you always know Molly’s backstory or did that come later on?

Justin: I’ve always known the broad strokes (and that’s also true for No, The Preacher, Jack, Ravello, and some other character we haven’t met yet) but some of it comes in the writing. John and Raven weren’t there in the beginning. And actually, Rachel/Noseless came up because Kyle drew Noseless in one of the early issues and I liked the design so much I built the character around her. Even then, she wasn’t intended to be worked into Molly’s story, but she fit a role that needed filling in a way that felt right. 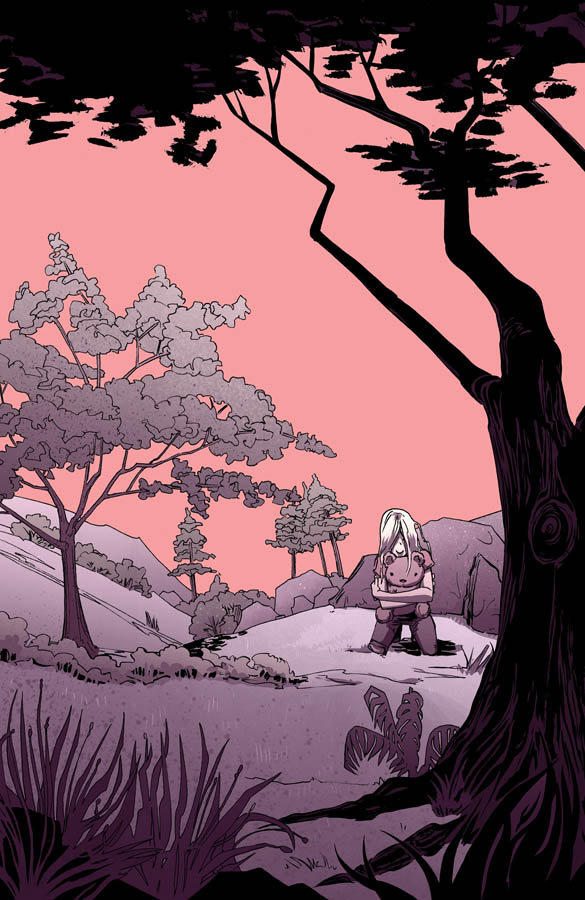 BiC: This issue deals with all the tragic things that happened in Molly’s past, including *spoiler* being offered to and raped by another big Spread character. This explains a lot about her mental state when No crosses her path. Was it a difficult decision to include this in her backstory considering the recent talks about “rape culture” and the recent controversies (I’m thinking for example about Game of Throne’s last season or the recent Batgirl cover incident)? Are you concerned about receiving backlash?

Justin: Yes. Very much so.

I mean, it’s hard not to be aware of it, and that’s a good thing. I generally dislike the entire rape as backstory thing, so when I decided to do exactly that, I needed to do so with some kind of self awareness of how that’s handled (mishandled, mostly, in fiction) and that I was writing from the perspective of a straight white guy. Which means I won’t ever experience the dynamics that go into it.

But I did it anyway. And I’m not sure what will come of that and whether or not it’s the right
decision, even now.

I am aware that it’s ultimately a selfish decision. It felt like the right thing for the story, and so I went with it, but I imagine that’s what every person who uses rape and sex assault as a plot point thinks. I hope I did it in a way that’s not explotitative, but, fuck, I don’t know.

I will say that the issue was one of the very few things I’ve ever written that was difficult to write. Genuinely emotionally taxing, which is really, really not how writing usually is for me. I don’t know if that means anything or if the product will have that affect on the audience.

One thing I hope that’s clear is that the rape and abuse by the character isn’t what broke Molly. It was the world that did that, and what she accidentally did in the end was the tipping point. But it felt real for the world.

BiC: What makes you attracted to the kind of stories you write? They are usually heavy on violence
and blood, and filled with shocking cruelty. When you are writing, what kind of experience do you want to give your readers?

Stephen King has said, and I’m paraphrasing, he was just built with a love for things that go bump in the night. I think that’s probably at least partly true, that a full answer requires self insight that I just don’t have.

But you know, I am fascinated by violence. I had a bad temper, when I was young, which I got a handle on when I was a teenager. But still, twenty years later, when someone does piss me off or when they do something shitty (both, usually) some part of me wants to punch them in the mouth and knows it would feel good.

The rest of me knows that’s fucked up. So there’s a simultaneous attraction to and repulsion from violence that tends to be present in my work. Luther Strode is pretty explicitly thematically about that, but it gets into other stuff too. 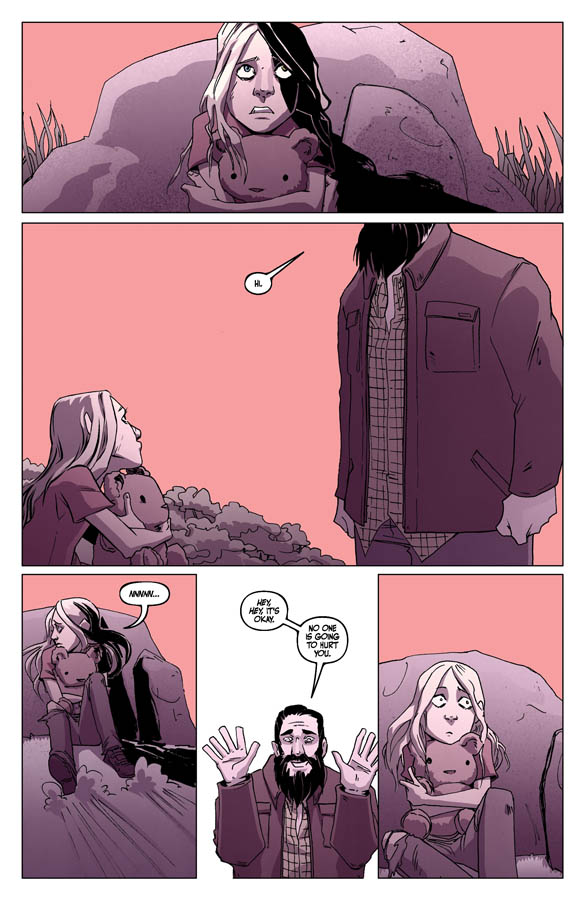 BiC: Jen, can you tell us about how you got started in comics and how you ended up working on Spread?

Jen: I studied comics at the Savannah College of Art and Design, and it was actually through the people I met there that I met Justin Jordan at a convention. Baltimore Comic Con? Or maybe Heroes. Either way, I was a fan of his work and Spread was one of the few series I was actually keeping up with as it was released, so it was really exciting that he asked if I wanted to do an issue of it.

BiC: Spread is a very gory and visually explicit universe, what was your approach to the more violent moments in the story?

Jen: Not that much different from how I think about any other type of storytelling, actually. I’m really thinking about clarity of action these days, so that was definitely a goal. I did have to spend a minute thinking about what, erm, a certain violent mutilation would look like (I actually ended up skimming a segment of Hellraiser for that one- ten points if you can guess which segment) but aside from the technical “what would that even look like?” violent actions don’t really get special treatment. They still have to make sense, move the story along, and get an emotional reaction from the reader.

BiC: So… on Comixology you’re credited for working on the indie comic book Hero Cats even though you have never heard of it, have you finally put on your superhero cape and discovered who’s that Jen Hickman impersonator?

Jen: Oh my goodness, just because of this question I went and googled them, got no satisfaction on any impersonator, and you know what? I dig the mystery and the misinformation. I’m not going to contact them and ask what happened. I’m just going to let this one be. In fact, if any other ComiXology creators would like to add me onto their books, by all means, go for it! That would be fun! 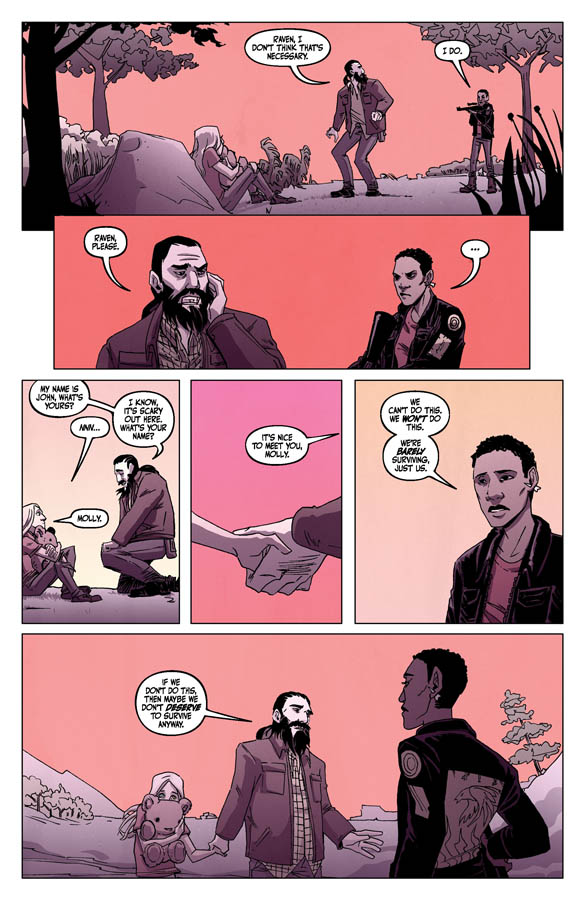 BiC: What other projects are you working on? Do you have any upcoming projects?

Jen: I’m juggling a small number of projects, some in comics and some in illustration. I guess the one I’m most excited about is Horizon 2, which will be the second installment of a themed anthology. The theme this time around is “grimoires” and we’re going to be kickstarting the project sometime this spring. So keep an eye out for it!

Justin: My book from Aftershock Comics, Strayer, starts later this month. That’s a kind of fantasy book with Juan Gedeon and Tamra Bonvillian.

Other than that, I’ve three unannounced projects coming out sometime in 2016, and a whole bunch of stuff being pitched. I like to keep busy.

BiC: If we want to learn more about your upcoming projects, where is the best place to do so?

Jen: I try to be active on tumblr, at umicorms.tumblr.com, but I am only somewhat successful in remembering to post about upcoming projects. For 2016 I’m trying to be better about that, so give a follow for project information, sketches, and convention announcements.

Justin: My Facebook, probably. I am trying to get a web presence going that’s not FB, but so far I am failing.