War and conflict are rampant. In order to find a solution, politicians and scientists collude to develop a new chemical weapon, DVO-8, that removes the belief in God. However, the chemical agent has a massive side effect, devolving organic material. Now, a young woman, Raja, sets out to save humanity. How does it fare?

Rick Remender, Jonathan Wayshak, and Jordan Boyd make some strong political statements in Devolution #1, while also introducing us to a strong, compelling protagonist in Raja and building a dark, dangerous world that she inhabits.

[easyazon_link identifier=”B018W46JD2″ locale=”US” tag=”bounintocomi-20″]Devolution #1[/easyazon_link] will feel very familiar, but it is also something new and unique. The gist of the story has a lot of zombie apocalypse story roots, but Remender also branches out to touch on a number of other different subjects seen in more traditional dystopias such as political systems and economics. However, where Remender really makes this book stand out is its focus on religion and how the entire story is based on the idea that the belief in God can be eradicated.

Remender breaks the story up into five main segments. In the first segment he exposes us to Raja and introduces us to who she is while also showing us the extreme danger the world now presents to her. He also gives us clues to her mission, but doesn’t quite reveal the full details. It provides enough intrigue to keep you reading, not to mention the gory and violent action scenes created by Jonathan Wayshak. 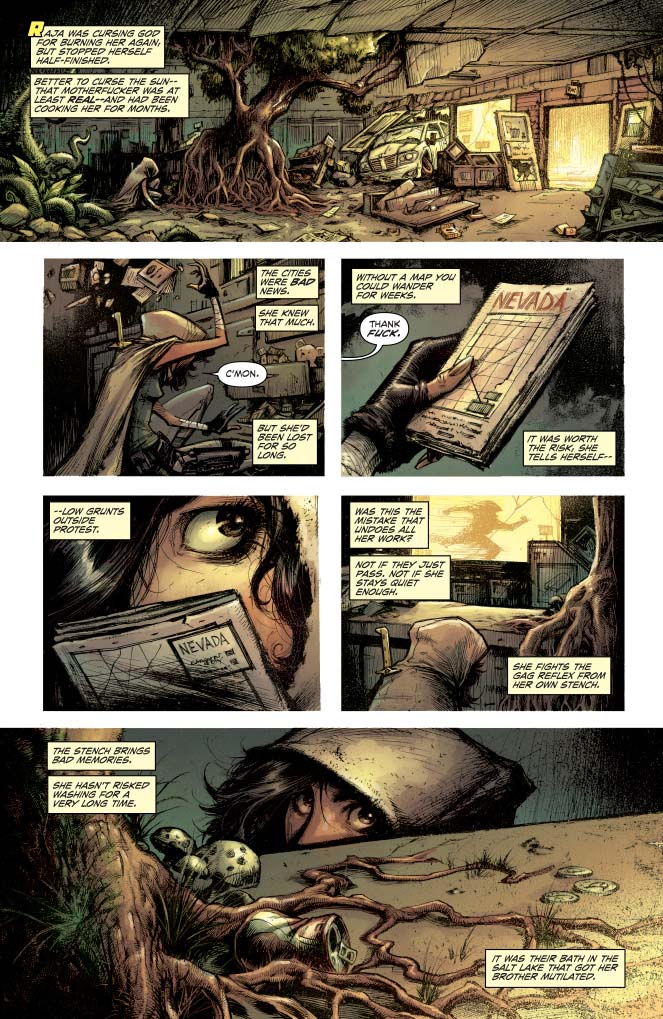 The second segment changes up the pace quite a bit and it might get a little slow for some as Remender is heavy on the exposition, detailing what caused the world to end up this way. This is where he makes some strong political statements about war, religion, politics, and the Western lifestyle; his narrative is pretty damning.

The transition to the third segment was a little rough. Instead of taking us back to Raja, he introduces us to a whole new set of characters. This allows him and Wayshak to continue to show us just how brutal this world is, but it also allows them to continue their critique of modern Western culture. Wayshak expertly uses a stop sign in multiple panels to get the point across. It actually ends up being quite comical.

The fourth segment also has a rough transition and forces you to fill in the blanks, but this segment continues to introduce us to the world, showing us a completely different scenario with a fortified town. It also shows people (although they aren’t sapiens) working together in an organized society. Remender and Wayshak introduce us to a number of colorful characters and continue to explore the absolute brutality of this world. I can’t emphasize enough just how brutal and violent this world is. The dialogue in this scene is fantastic. The interaction between the characters is believable and you can almost feel their tones coming through the page whether it is extreme anger or a sly wryness. It also shows the vastly different levels of intelligence among these individuals.

The final sequence is probably the most bizarre. Remender and Wayshak introduce a whole different layer to the story, but within this sequence they capture the heartbreaking emotion of loss. They introduce two characters and in just a few pages deliver a gut-wrenching scene that will have you on the verge of tears. 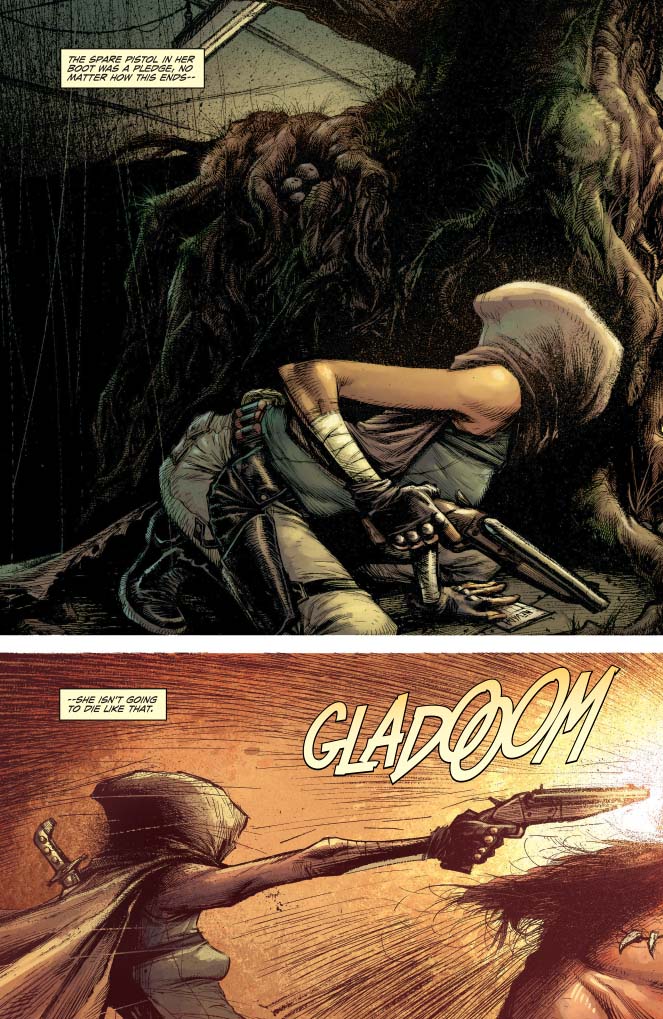 If you didn’t get the hint before now, Wayshak’s artwork is extremely brutal. There is violence and gore abound in this book that is truly horrific. He also includes a ton of symbols in his artwork from the aforementioned stop sign to certain tattoos on characters. There are so many different symbols it will probably take a couple of read throughs to notice most of them. I even think there are references to recent controversies within the comic book community. My only real complaint is a very small panel in the last sequence that zooms in on one of the character’s faces. Wayshak gives the character an odd lip job that makes his reaction feel unrealistic to how the sequence is playing out. Fortunately, it is a very small panel and you can quickly glance over it.

Wayshak does a great job of providing a ton of different camera angles. This allows you to really take in everything that is happening. He does a great job of mixing in close-up, personal panels showing a character’s rage bulging in their neck to shots further away detailing an entire camp.

Jordan Boyd uses a lot of earth tones to give the book its dark, rough, and violent tone. He also does a great job depicting gunshot impacts. He begins the explosion with an almost white center and slowly adds in yellows, oranges, and reds the further from impact the blood spray is. In addition, he makes a clear difference between the scenes involving Raja and the final scene. He uses very bright colors contrasted with dark backgrounds as opposed to the earth tones. He is also able to subtly evoke emotions using a light purple during a passionate scene in the jungle. 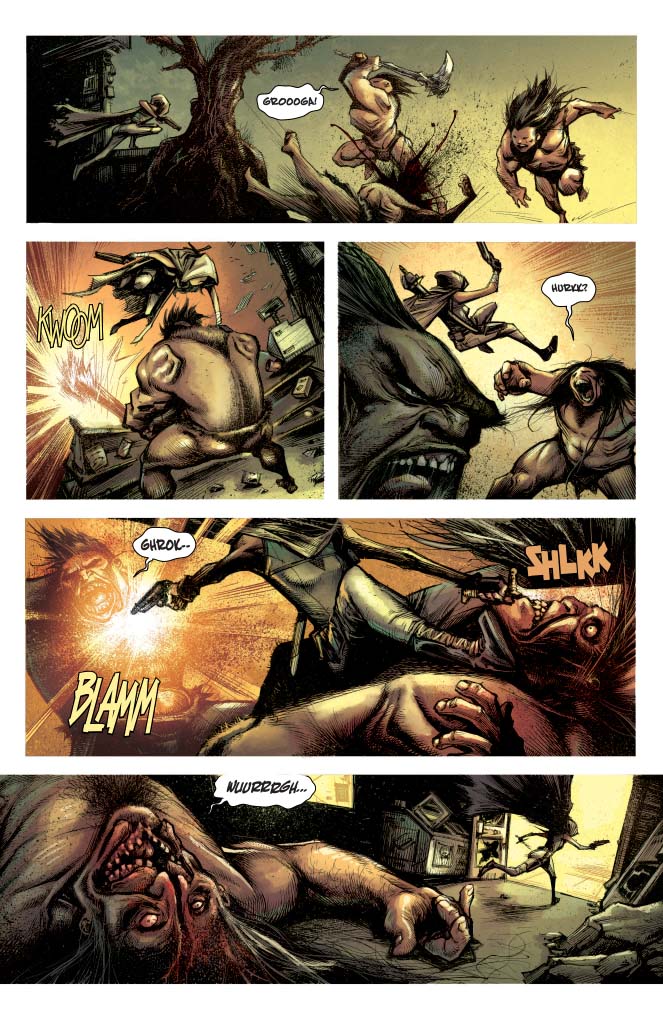 [easyazon_link identifier=”B018W46JD2″ locale=”US” tag=”bounintocomi-20″]Devolution #1[/easyazon_link] is absolutely brilliant. Rick Remender and Jonathan Wayshak create compelling characters, a brutal and violent world, and an intriguing story. They are also able to make some strong political and cultural statements through both the narrative and the artwork. The only faults are some transition issues and some folks might not like the heavy exposition in the second sequence. This book is familiar yet radically different and unique. This is a must buy. Go get it now.