This past Saturday, we had the pleasure of attending the first of three VA COMICON’s this year and our first stop was with writer, illustrator, and self-publisher Dan Nokes. We chatted with Dan about his involvement with the VA COMICON and the current projects he is working on including his webcomic, Impossible Space Tales of The Last Pit Stop.

BiC: We just got to VA COMICON and we’re talking to Dan Nokes. Do you want to introduce yourself Dan?

Dan: I’m Dan Nokes, Lord and Master of all that I survey, Devourer of Worlds. I also work for the VA COMICON as well as put out my own comics though 21st Century Sandshark Studios.

BiC: Can you tell us a little bit about the Con? How long has it been around?

Dan: This will be the 30th Anniversary of the show. It started back in 1986. Started by Guy Rose. I came into the picture as a vendor roughly around 2006, but I was asked to start doing vendor and small press stuff around 2010.

BiC: You guys do about three shows a year now?

Dan: It usually ranges between three and five, they are doing three for this year. The one we are at right now, one in June, and our two day show will be October 29th and 30th if I’m not mistaken.

BiC: You also publish your own comics through 21st Century Sandshark Studios. Can you tell us a little bit about that?

Dan: It’s a self-publishing vehicle that I started back in 2002. I did book a called the Reptile and Mr. Amazing. I’ve gone to do other books such as The Paranormals, The Pistoleers, Adam and Eve: The Bizarre Love Triangle and the Zombie Apocalypse, and my current webcomic called Impossible Space Tales of The Last Pit Stop. Basically, what if Area 51 were in fact a convenient store for aliens.

BiC: That’s pretty cool. Do you want to tell us a little bit more about that one?

Dan: First of all it’s online.

BiC: Where is it?

Dan: 21sandshark.com and it’s free. It’s free people. It means you have to spend nothing but your time and mental energy in order to enjoy the comic.

BiC: You said that it is at 21sandshark.com?

BiC: How often do you update?

Dan: Basically, it’s one of those processes where I put up a new issue when I get a new issue out. I’m working at issue 10. There are nine issues out that are totally available to read. We are trying to finish up the entire series by the end of the year, which is three more issues. I’m working on ten. I’m looking for an early March release on that one followed by issue 11 and probably a big double-sized issue 12 to wrap the series up.

BiC: When you are saying issues are those full 25 page issues?

Dan: Anywhere between as little as 16 as many as 25-26 pages. I don’t really do too much of ads other than right at the beginning and right at the end. Those are mostly for Sandshark Studios themselves. It’s like 24 or 25 full pages worth of work. 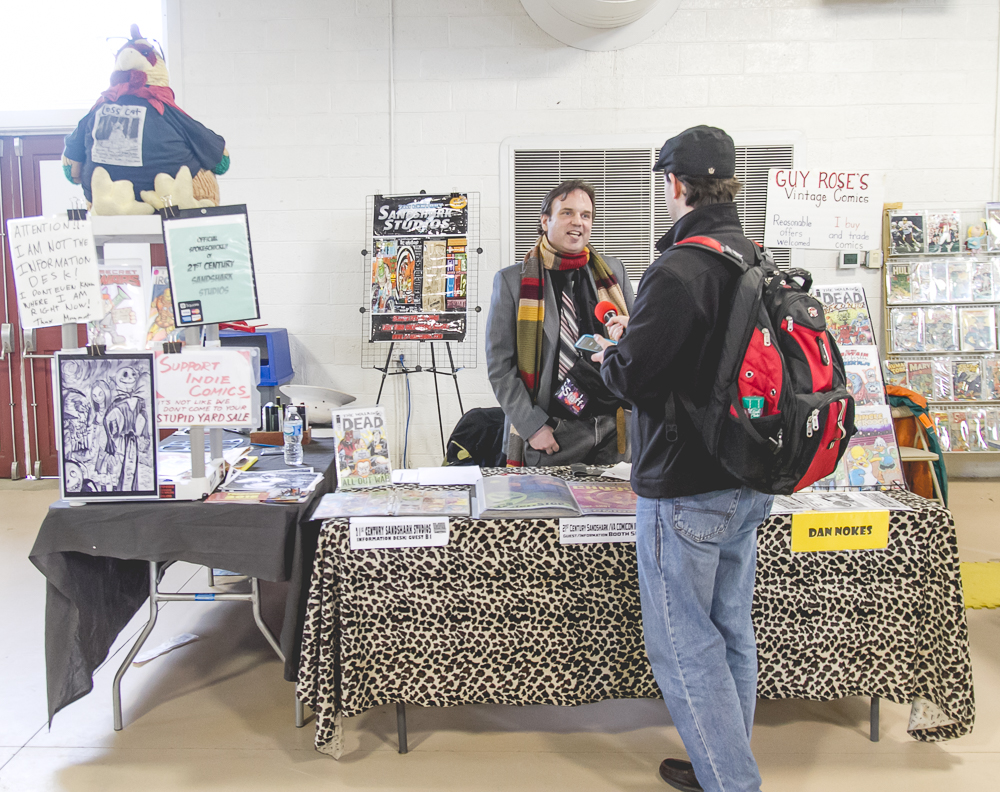 BiC: You mentioned The Pistoleers was your Western, do you want to tell us a little bit about that one?

Dan: It was made between 2008 and 2010. It was a three issue series. I had done a superhero series and a Vertigo-esque fantasy, modern myth, Tolkien-esque type deal.

Dan: Yea, kind of like Fables, a little bit of Buffy, a little bit of Neil Gaiman. It was called The Paranormals. By the time I got to the end of that, I just wanted something that was a lot more grounded in reality. I had become a Western fan over the last four or five years. I love stuff like Silverado, Young Guns 2, the John Ford movies, a little bit of the spaghetti westerns here and there. I wanted the chance to do a Western but more from a non-Anglo point of view.

You have characters like an ex-slave, two immigrants both from China. One of them is named Abraham Lincoln Quan. His family came here in the early 1860s and they were in a new country and they wanted to give him a name that was powerful. Who was the most powerful man in 1861? Abraham Lincoln. So his name was Abraham Lincoln Quan. You also have a trick shot. She is a mix between Annie Oakley and Calamity Jane. Annie Oakley’s natural skills and Calamity Jane’s self-destruction. Her name is Dee O’Hallahan. I also have a Native American named Nakachile. He is a Chirakawa Apache.

I have little sub-themes. I’m a big fan of the idea that history is a big game of telephone. What people don’t popularly conceive is the way things actually happened. One of my sub-plots centers around Nakachile and the situation of the Native Americans at that time. The main drag of the story takes place around late July and early August of 1876. This is a matter of about a month after the Battle of Little Big Horn. The way people thought of Native Americans at that point was kind of very similar to the way Muslim Americans are thought of now. All kind of grouped into one situation. Especially after 9/11. There was a rallying cry instead of trying to see it as a holistic situation. Everbody from that group ranges the gamut. That character exemplifies the situation at the time.

BiC: How much research do you do when you are writing a historical fiction?

Dan: I wanted to do enough to where other history nerds would not call me out. To date I have only been called out once and that was when a guy looked through the book and looked at one of the six-shot and he said,” that looks like a seven shot and there is no such thing.” I think that was the only time I was ever called out on any kind of historical accuracy. I try very much to not get caught doing something that is inaccurate or I didn’t do enough research. 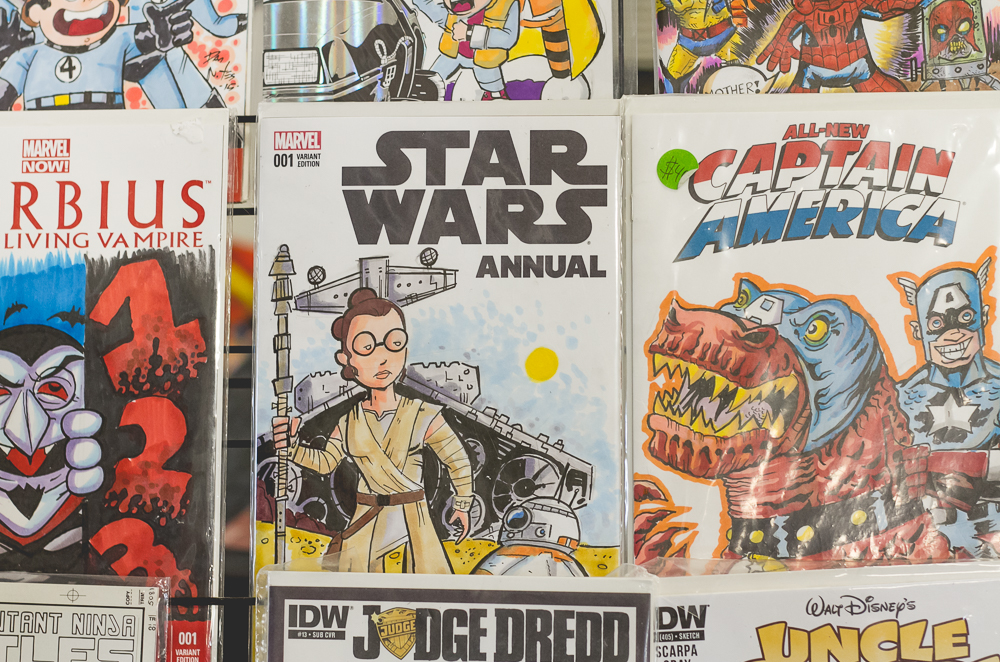 BiC: Do you both write and illustrate?

Dan: Yes. I write. I illustrate. I self-publish. I do some work-for-hire stuff as well. My two big non-self-published stuff is Teddy Bear Tales. It’s a series of children books created by Nick Davis. I designed a large section of the characters. It follows this guy Tristan. He goes around fighting the monsters under the bed with a lot of his different allies. In fact, there is a picture of him down there. It’s more of an all-ages children book, fantasy tale. I did a couple of submissions for the Fubar series. In By The Sword, a six-page story. And I did a six page story in American History Z. On top of that, I did a couple sets of Star Wars for Topps.

BiC: What was it like to work with Alterna?

Dan: I work more for Fubar. It’s nice to be able to say I have a credit for a company that is nationally recognized. I didn’t really interact with Alterna directly. Fubar contracts all of the artists and writers and we work with them. Jeff McComsey and the head honchos of Fubar submit their stuff to Alterna for distribution. It’s me working for Fubar and just happen to have the luxury of having a large company distribute stuff I’ve put out.

BiC: When you come to a Con what is your biggest goal?

BiC: What do you have here at your booth that you are trying to sell?

Dan: Right now, I don’t have a whole lot of books in stock, but I will be taking care of that within the next couple of weeks. Mostly sketch cards, I do commissions, I do prints. I’m trying push my webcomic out, Impossible Space Tales. Some sketch covers that type of stuff.

BiC: We can find that all on your website?

BiC: Thank you very much Dan. Appreciate it.