Revival, one of Image’s top comics, recently started a new arc of their series about a small Wisconsin town that sees their dead ones return to life. We took this opportunity to chat with creators Mike Norton and Tim Seeley about what’s in store for the future of [easyazon_link identifier=”1607066599″ locale=”US” tag=”bounintocomi-20″]Revival[/easyazon_link].

BiC: Issue 36 marks the beginning of a new story arc. After almost a thousand pages into Revival, do you find it difficult to keep surprising your audience? Do you expect to explore new territory and themes with this arc?

TIM: It’s not difficult to surprise the ones that are reading, really. Getting people to talk about the series, and keep getting the good buzz without resorting to a relaunch…that’s the tough part. I could write this story and these characters forever! But getting jaded comic reader eyes is the hard part.
And yeah, every new arc of REVIVAL deals with new themes, and I think one of the strengths of the book is that we don’t have to dwell on the same ol, same ol’. It’s an ever-evolving story and cast.

BiC: When you first started Revival how much of the story did you have planned? Do you know when and how you want the story to end?

TIM: Yeah, we had the ending planned, and a lot of the “big beats” mapped out from the very beginning. But we also had plenty of room to explore based on our whims or audience reaction too.

BiC: Recently a sort of controversy regarding your DC series Grayson happened regarding sexual objectification. You said you wanted to “challenge and explore objectification”. Would you say the interaction between Lester and Bonnie is a continuation of that?

TIM: Hm. Nah, I don’t think so. It’s just a story about two people trying to find an intimate human connection in a crazy stressful world. I think Lester’s entire life is about the pursuit of what he thinks is perfection, and he’s just so resistant to changing his standards, that he’d rather be alone and unhappy. I think that’s more of a metaphor for romance than any kind of condemnation of objectification. 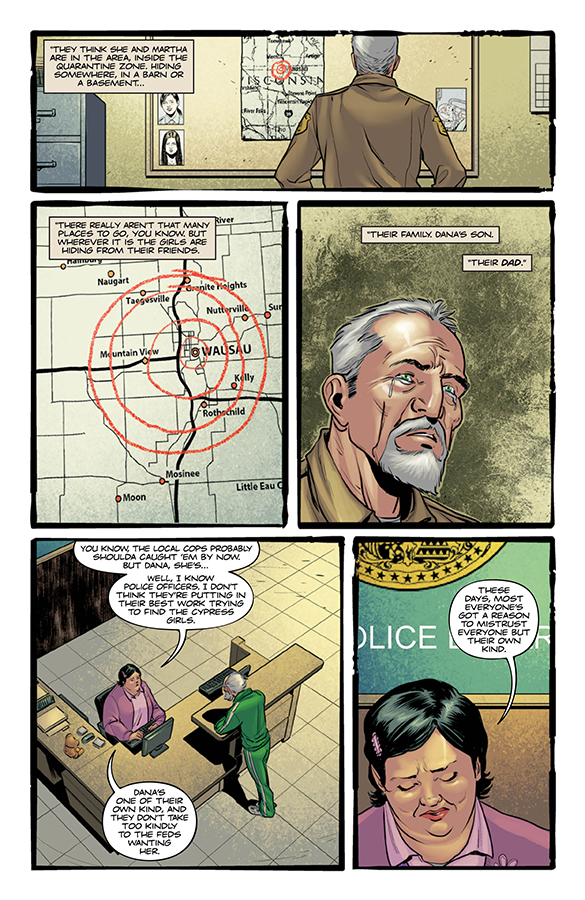 BiC: You’ve managed to make a small town in Wisconsin feel completely familiar and realistic, to the point where I feel I’ve been there myself. Do you know these parts well, do you have a special attachment to the area?

TIM: Oh yeah, I grew up in Wausau. I spent 19 years there, and I go back there to see my family often. I like writing “places” and I felt like my affection for the area, along with my occasional dislike of it, would help ground a pretty fantastical story.

MIKE: I’m from a similarly small place back in West Tennessee. Small towns have a vibe.

BiC: It must be an interesting exercise to draw the same scenery, the same small town, over the course of now 36 issues, do you have the whole town mapped out? Do you get tired of this snowy Wisconsin town?

MIKE: I absolutely DO NOT have Wausau mapped out! It’s funny because when I do signings there, people talk about how dead on the locations are and I’m thinking, “Wow, because I’m making a fair amount of that up!” I’ve been there a lot, so I do have a feel for it. As for if I’m sick of it, I wouldn’t say that. I’ll miss it when the book is over.

BIC: In this issue, you’ve tackled the subjects of feminism and body positivity. In a previous one, a character stated the younger generation will see the last of the bigots die and that soon homophobic or sexist ideas will be a thing of the past. Do you believe that yourself, isn’t it a bit too optimistic?

TIM: I dunno. On my good days I believe it. I think the bigger question is “Does General Cale, who spoke those lines, believe it?” That’s the stuff that’ll play into the story over the next 10 issues.

MIKE: I do and I don’t. I think culture definitely wants to go that way. But human beings… 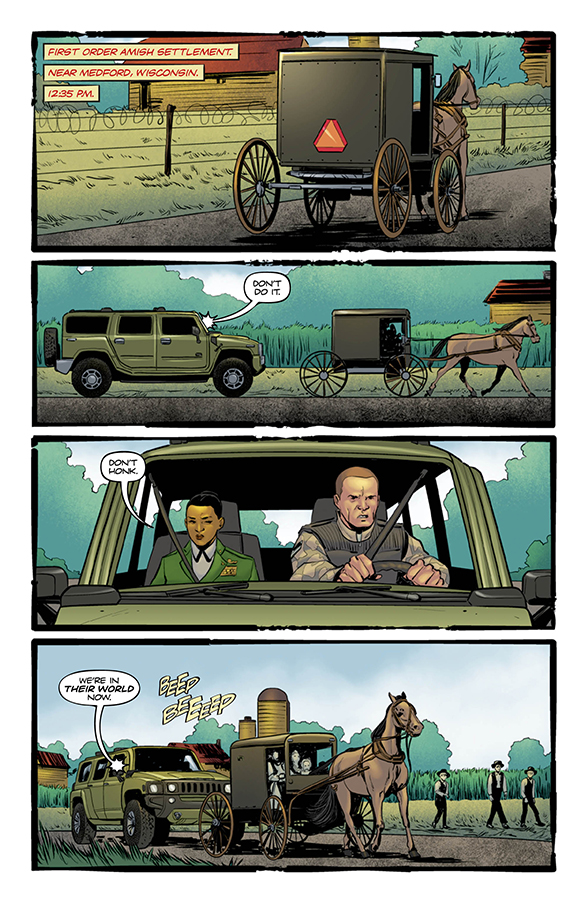 BiC: Is there any update on the Blade series that was announced last year at SDCC?

BiC: Can you tell us about your other projects and what we can look forward to from you in the future? Where should we go if we want to follow you in the social media world?

TIM: I’m on Twitter as hackintimseeley. I’m working on some superhero stuff for DC, a new creator-owned sci-fi book, and a fun little indie comic series based on a favorite cult film. I’m guessing all of that stuff will get the proper company-approved announcement in the next few weeks.

MIKE: I’m on Twitter @themikenorton. I’m drawing Revival mainly, but am still about 15 pages away from the completion of my web series, BATTLEPUG. I’m also working on an arc of a well known comic from Dark Horse at the moment. You’ll see!