We stopped by the Archvillain Comics booth at VA COMICON to talk with Brad Stafford about what books are selling down in Blacksburg and what he sees as the trend in the industry moving forward.

BiC: We are here at Archvillain Comics, do you want to tell us a little bit about who you are and your store?

Brad: Yea, my name is Brad Stafford. I’ve got a shop. I sell comics out of a store called Fun N Games in Blacksburg, Virginia.

BiC: That’s awesome. At your Fun N Games, you sell everything?

Brad: It’s a game store. I’ve partnered with them to sell comics when the local comic dealer went out of business. We partnered up and I sell comics out of their shop. We sell comics, games, that kind of thing. We are actually having our own show in April.

Brad: I sell mostly new comics. I would love to get into more old comics, but its just not going that direction right now.

BiC: What’s the market like down there in Blacksburg, what are your top-selling books?

Brad: It’s driven by college students. A lot of newer characters, a lot of female characters, Spider-Gwen is really popular. Ms. Marvel stuff like that. It’s dropped off a little bit since they did the Marvel relaunch and DC did their convergence. Market’s slowing down a little bit, but not too bad.

BiC: Have you heard the rumors about DC’s Rebirth? What are your thoughts?

Brad: I don’t know I’ve heard that for a long time they were going to do another relaunch. Is that confirmed is that actually going to happen?

BiC: I don’t think it has been confirmed what its going to be. They have confirmed there is going to be something called Rebirth whether that is an event comic, don’t really know what it is. Bleeding Cool has been leading the way saying it is pretty much a reboot of their line. (Editor’s Note: DC has revealed the first details on Rebirth).

Brad: They just did New 52. At least DC has the balls to do a full reboot. Marvel does not. There is that. They’ll sell well. I’m sure the Batman #1 will sell well.

BiC: You talked about Ms. Marvel and Spider-Gwen are you seeing those sales do a little bit better in trade versions?

BiC: Do you primarily do DC and Marvel or do you branch out to smaller publishers?

BiC: Yea, they got the Turtles.

BiC: Larry Hama is over here with G.I. JOE 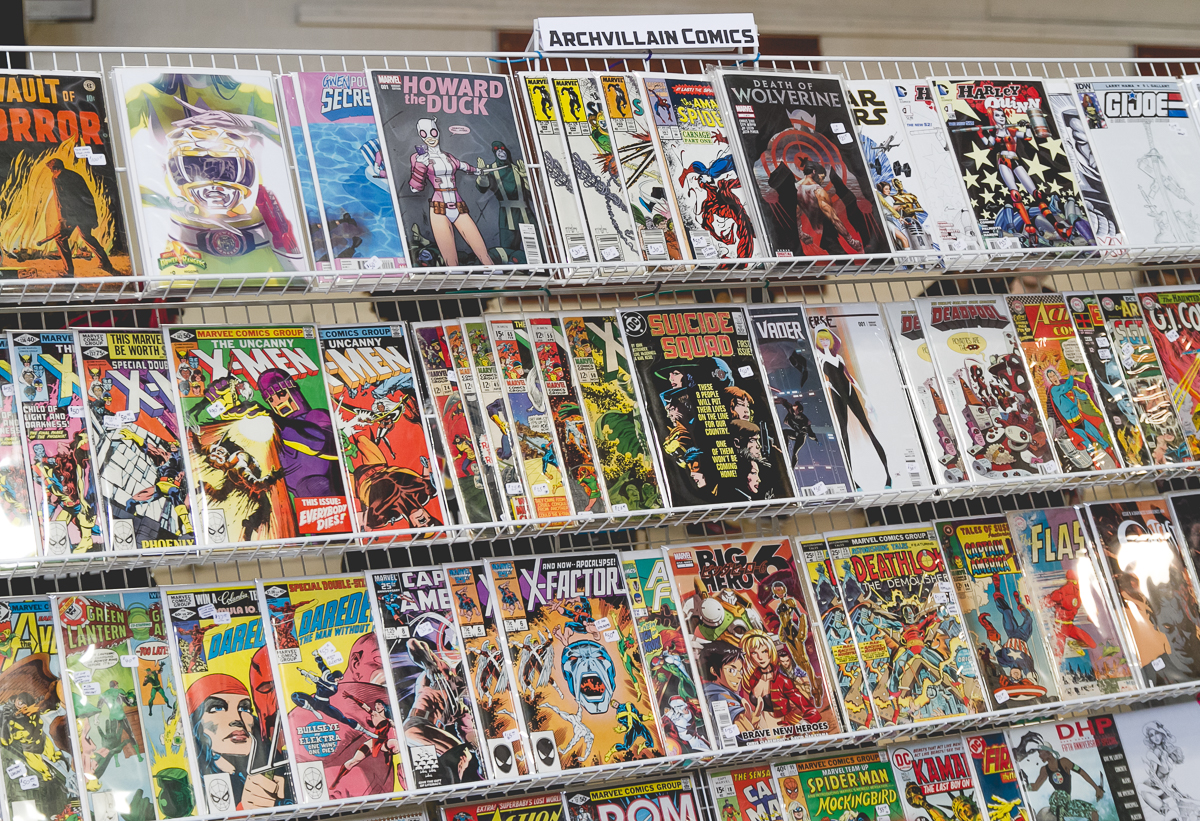 Brad: Image has some really hot creator owned books. I’m not going to go as far to say it’s doing better because Saga is huge, Walking Dead has been huge.

BiC: What about some of their more lesser-known creator owned books?

Brad: It’s hard for me to carry a lot of those titles because there is so much stuff coming out right now. It’s hard to carry the titles. I usually get a lot of the #1s.

BiC: What makes it so difficult?

Brad: It is. Diamond is at least a little bit helpful with saying this is featured. We expect this to do well. That helps a little bit. Usually if they have the little Gem of the Month thing next to it, I’ll be more likely to carry the title.

BiC: Do you have a lot of creators come to your store to try and sell their books to you?

Brad: I have a few that do indie comics that we have tried to sell it. Some people seem to want to get the most independent thing they can find. But otherwise not a lot of sales of local independent books.

BiC: What about less local, but still creator-owned doing their own Image books or Dark Horse?

Brad: I’m too far away from the big cities. We don’t really have that in Blacksburg.

BiC: Do you think that is something that happens throughout the comic industry?

Brad: I see them going to different stores here and there. The creators doing signings for free comic book day or events like that. We are too far with travel. I’m having trouble with the convention, we can’t really find a top tier artist.

BiC: How would you sell a creator-owned compared to DC or Marvel?

Brad: The creator-owned books I’ve sold, I do more on consignment. If its a small independent thing, they just want somewhere where somebody can buy the book. They can say ok you can go to the store and buy it. It makes the customer feel likes it more of a mainstream thing if they can go to somebody else and buy it. That’s happened before. There is a guy who does a comic called Metal Cult Comics. He’s in a metal band, he also does his own comic. It’s pretty awesome and he’s a frequent guest at any of my events. He’s pretty popular. Got a plug in for that guy.

BiC: Thank you very much. I’m actually a Hokie grad so we’ll probably come down there.