The world has become driven by ratings as people perform horrible actions to attain those ratings. Worse yet is the techno-addiction driving those ratings, completely consuming individuals and detaching them from reality. However, there is still hope. The island of Tokyo has created its own society separate from technology-driven Los Angeles, but will the tech lord of LA allow it to exist? How does it fare?

[easyazon_link identifier=”1632156636″ locale=”US” tag=”bounintocomi-20″]Tokyo Ghost Vol. 1: The Atomic Garden[/easyazon_link] begins with an action-packed chase sequence and corresponding narrative providing key exposition to build the world and introduce us to the different characters. It is a little bit confusing trying to figure out whose voice the narrative is coming from and takes most of the first issue before writer Rick Remender makes it clear. The narrative can be a little preachy at some points especially in the beginning half of the story, but this seems to be Remender’s M.O. as he uses a similar technique in Low and Devolution.

The world Remender and artist Sean Murphy create takes the idea of new video content to the extreme. They literally turn the world into a giant video game and it feels like it. They have death races, first person shooters, hack and slash, and you name it’s in there. They want you to think it is turned into a video game as well. One of the characters has an old school Nintendo controller built into his arm with joystick attachments. There are even stimpaks that can boost characters making them unstoppable.

The problem is Remender is a little pontifical in describing the world. He beats you over the head with how awful it is. He does switch away from this as he progresses and he really turns the narrative into the voice of the character. He does this with an interesting narrative form, using pretty large white spaces next to Sean Murphy’s panels to provide an almost journal-like entry for the character’s thoughts on what she is experiencing. It is very Frank Miller-esque. 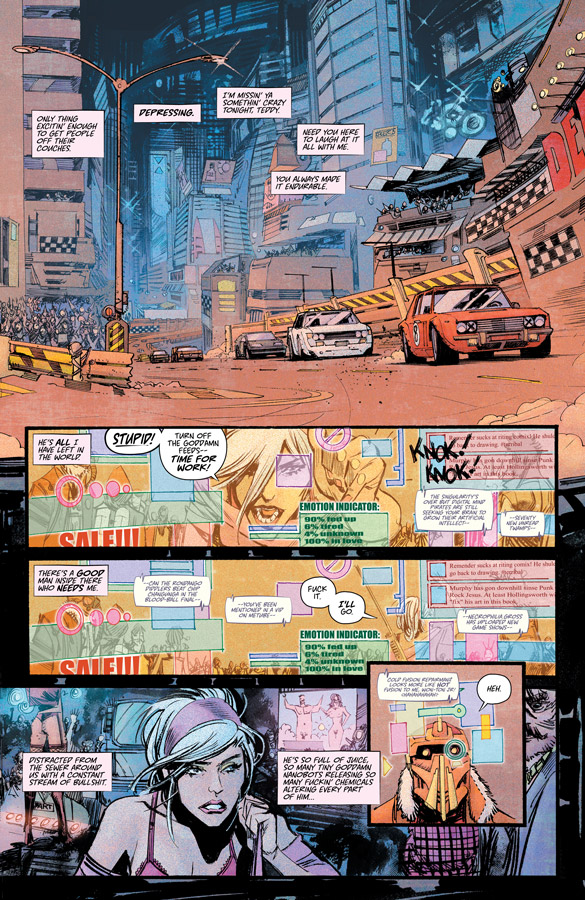 The best aspect of this story is the relationship Remender builds between the two main characters, Led Dent and Debbie Decay. He introduces us to them in the opening of the story, but really builds on it in the middle issues. You feel connected and invested in them. You are rooting and cheering for them. The third issue really shows how much they care for each other.

The story, especially once it hits the midway point, flows flawlessly. The decisions characters make feel real and at times feel like the only ones they can make. Even when a plot point seems a touch forced, Remender provides an excellent narrative inclusion to explain why it perfectly makes sense and even ties it back to the beginning of the story. He really does a good job of weaving and connecting it all together. 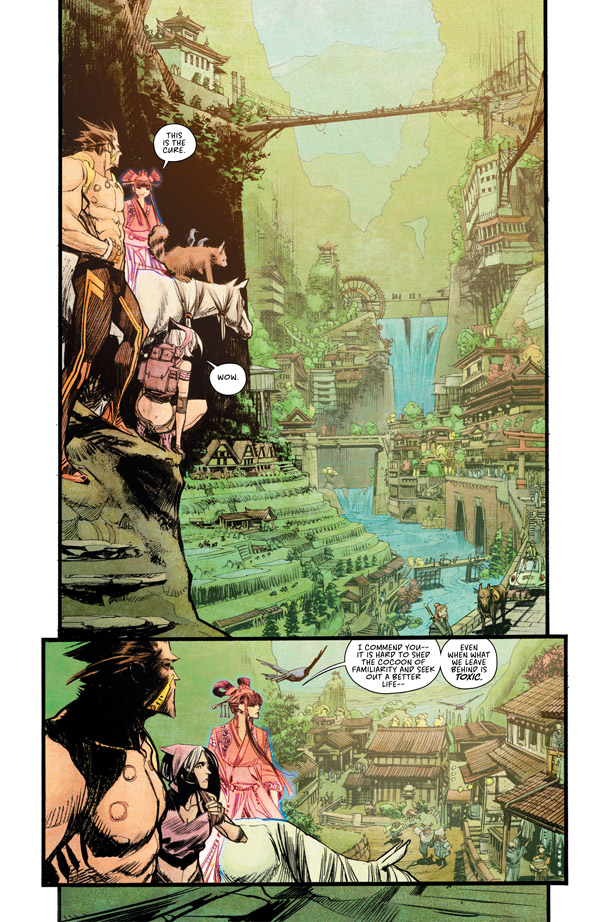 Sean Murphy’s art is exquisite. He is able to seamlessly create two different future societies that sit within the same world. The first one has an almost retro-vibe to it. This is seen with a character design incorporating a Nintendo controller. In addition, there is a Death Race with classic rally cars that have a real Speed Racer vibe. He meshes these retro-vibes with enhanced technology, multiple digital screens, and cybernetic implants. In contrast to this first society, the second society is lush and full of nature. There are buildings, however, the Earth has overgrown them with tree roots and vines crawling up and down them. There is peace and harmony. These two different societies also capture the battle being waged within Led Dent’s and Debbie Decay’s relationship. It’s truly powerful how the art reflects their relationship.

The action scenes are exciting, but also extremely violent. The things Murphy depicts Led Dent doing with his motorcycle are absolutely grotesque, but amazing at the same time. He also uses some unique panel layouts. On one page he uses an 18-panel spread with two normal horizontal panels bookending sixteen smaller panels of varying sizes. It does an excellent job of depicting memory shock, giving us small glimpses into Led Dent’s past. He also makes great use of inset panels to quicken the pace and heighten action scenes or provide added details to heighten the dramatic tension. 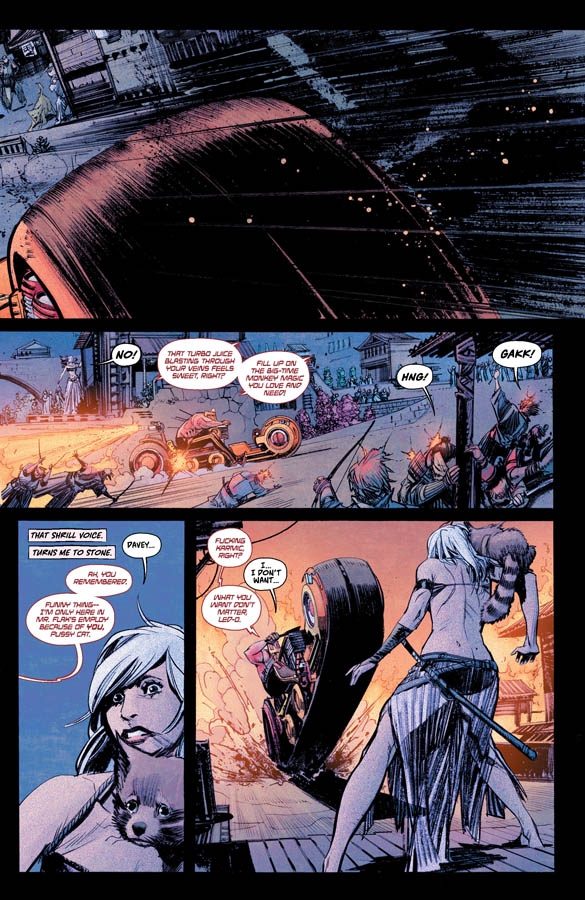 Letterer Rus Wooton also does a commendable job. He is able to capture certain character’s nature by changing the font color. It allows you to imagine a completely different accent. There are also some nice little sound effects he adds that are so subtle you might miss them, but they just add to the detail of the book and help immerse you in the story. He also does an excellent job with the big sound effects too. There is one scene where a scooter becomes a deadly weapon as an attached buzzsaw begins tearing people apart. He has the corresponding sound effect for the buzzsaw move in a circular fashion with the object, making it appear as if the object is actually emitting sound.

[easyazon_link identifier=”1632156636″ locale=”US” tag=”bounintocomi-20″]Tokyo Ghost Vol. 1: The Atomic Garden[/easyazon_link] is an intelligent, beautiful, post-apocalyptic story. It starts off a little slow and a tad too preachy, but about halfway through the second issue the book really takes off, delving into the relationship between Led Dent and Debbie Decay. The dialogue is wonderful and the story is exciting, peaceful, hopeful, and tragic all wrapped in one. Sean Murphy’s art is absolutely gorgeous; he is able to be creative with innovative page layouts and an excellent use of inset panels. You should definitely pick up Tokyo Ghost Vol. 1: The Atomic Garden; you will not regret it.