Beware of Spoilers for Batman #32, Ye Who Enter Here

USA Today released the final two panels from Batman #32, in which Catwoman says YES. Finally, the Bat and Cat are now engaged thanks to Tom King. Beginning with incredible violence and ending emotionally, King’s most recent arc concludes in this issue. Bookending the “War of Jokes and Riddles” with this incredible romance was an inspired decision. His work on Batman was captivating from the first pages, but now he’s furthering his status as one of the greats. 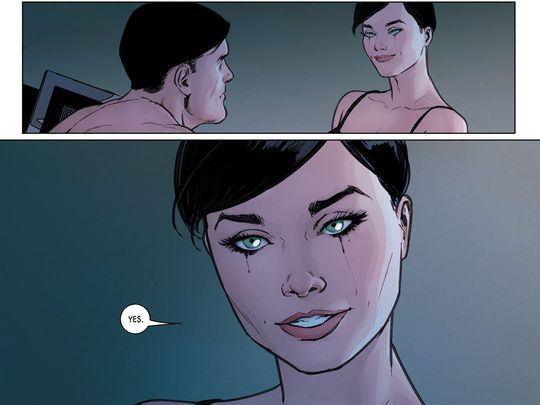 Surprisingly, the two heroes have been together for nearly a year now. King’s work on both Batman and Catwoman has been noteworthy. He’s fleshed out the Batfamily just as well as Bruce himself. King’s work on The War of Jokes and Riddles has been truly something to behold.

Our review of the comic comes out tomorrow. But here’s a minor and obvious preview: Batman #32 is comic bliss. Catwoman’s answer is merely the cap to an incredible end to the “War of Jokes and Riddles.” Mikel Janin and Tom King have solidified their run as a need-to-read for any comic fan.

Tom King plans to remain on Batman for 100 issues. Accordingly, that would make this the end of his first act. Both Batman and Catwoman have suffered greatly in the previous 31 issues. Batman has been pummeled; Catwoman has been shot and tortured. Together, the two have overcome some of comics’ greatest psychopaths to find love amongst heroes. Ironically, though they may be clad in dark, their hearts are earnest and true.

Tom King elaborated on why their romance works, “they’re two broken people, and because they’re broken, they have the edges that fit together.” But he was quick to add that opening up emotionally especially expressing feelings of love is truly frightening to Batman, “That to me is what true love is. It’s showing who you truly are to someone. It’s letting someone know deep down who you are and that’s horribly frightening and it scares Batman as much as anything ever has.”

Catwoman was a villain in the past. She’s famous for her Robin Hood sensibilities, willing to take from the rich to give to…mostly herself. Not anymore. She’s one of Batman’s greatest allies in the New 52 and Rebirth. Like Alfred or Dick, Selina Kyle has aided Bruce quite a bit recently. An endearing expression of the feelings she has for her beau.

Unsurprisingly, the emotional growth between the two is wonderful. It’s been a while since Bruce’s had a reason to smile. The last, happy addition to the Batman canon was Damian. Grant Morrison’s creation of Batman’s biological son was first met with animosity. But over time, and an incredible run on Batman and Robin, we came to love the adorable assassin. Now, Bruce can find even more happiness in the hands of a lover. Could we see another biological child in Batman’s future?

How Long Will It Last?

One question comes to mind about Batman’s impending happiness. How long can it last? Comic readers know that Batman’s character is a tragic character. He was born by the barrel of a lone gunman. Can he be allowed to have some happiness? The greatest artist in modern comics, J.H. Williams III famously left the Batwoman title, since DC was unwilling to let Kate Kane marry her beloved. However, DC told a different story.

The publisher said the Batfamily were all meant to be tragic characters, and as such are unable to have happy endings. Is that a sign that Tom King’s orchestration is destined to fall apart? Probably not. It’s more likely the executives at DC were trying to justify their decision regarding marriage equality, a hot-button issue.

Bruce Wayne deserves peace and Selina Kyle deserves love. Let the two be wed, and let us all rejoice. The darkest knight is getting a little brighter.