Imagine having to work on a project with someone who doesn’t like you. That’s an experience most of us can remember back in school. For Jim Carrey that was the environment with his co-star Tommy Lee Jones.

Carrey and Jones co-starred in the 1995 film Batman Forever where Jones played Two-Face and Jim Carrey played Riddler, the two main villains of the film. Jim Carrey talked about his time with Tommy Lee Jones on the set during Norm Macdonald Live, “I was the star and that was the problem… He’s a phenomenal actor, though. I still love him” 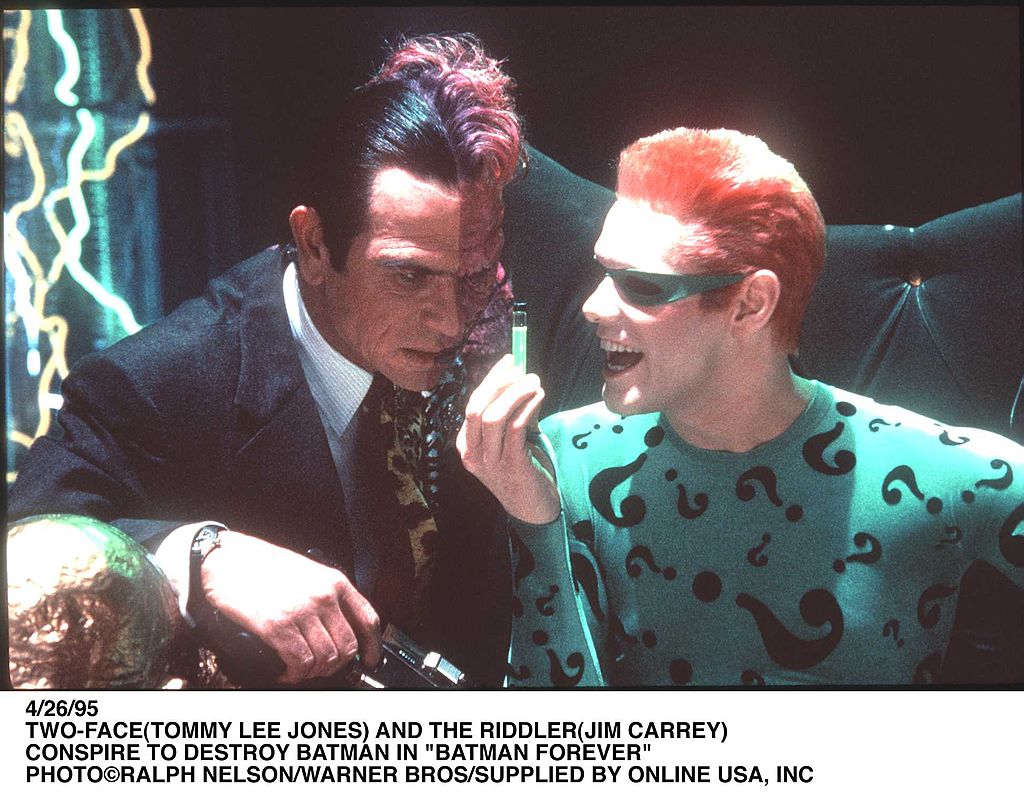 According to Jim Carrey, Tommy Lee Jones made it very clear he wasn’t enjoying his time on set. He recalled an evening right before the two actors had their “biggest scene together.” Carrey happened to show up to the same restaurant where Tommy Lee Jones was currently eating. He goes into detail about the encounter:

The maitre said, ‘Oh, I hear you’re working with Tommy Lee Jones. He’s over in the corner having dinner.’ I went over and I said, ‘Hey Tommy, how are you doing?’ and the blood just drained from his face,” Carrey said. “And he got up shaking — he must have been in mid kill me fantasy or something like that. And he went to hug me and he said, ‘I hate you. I really don’t like you.’ And I said, ‘What’s the problem?’ and pulled up a chair, which probably wasn’t smart. And he said, ‘I cannot sanction your buffoonery.’

Norm Macdonald theorized Jones must have been jealous or didn’t like Carrey’s quick rise to stardom. Carrey, on the other hand, had a different theory, “He might have been uncomfortable doing that work, too…That’s not really his style of stuff.”

If you want to see the part about Jones it starts around the 1:08:30 mark. The entire program is great and I suggest you enjoy the whole thing. What do you think, is Jim Carrey exaggerating what happened? Or are the rumors of Tommy Lee Jones being difficult to work with true? Let us know what you think!