“I was only 8 years old when my war began, with a shot fired in a Gotham City alley…began with an oath that what happened to me could never happen again.”

The most talented creative team to tackle a Dark Nights: Metal tie-in create a knockout blockbuster in Batman: The Merciless #1. Peter Tomasi and Francis Manapul are two of comic’s best. They’ve been party to some of the greatest DC stories told in recent memory. Together they help their Bruce Wayne give true meaning to the title “Merciless.” The destruction and mayhem in these pages are glorious to behold. With a patient and surprising story from one of the best writers out there, the Dark Nights: Metal event is actually living up to the hype. 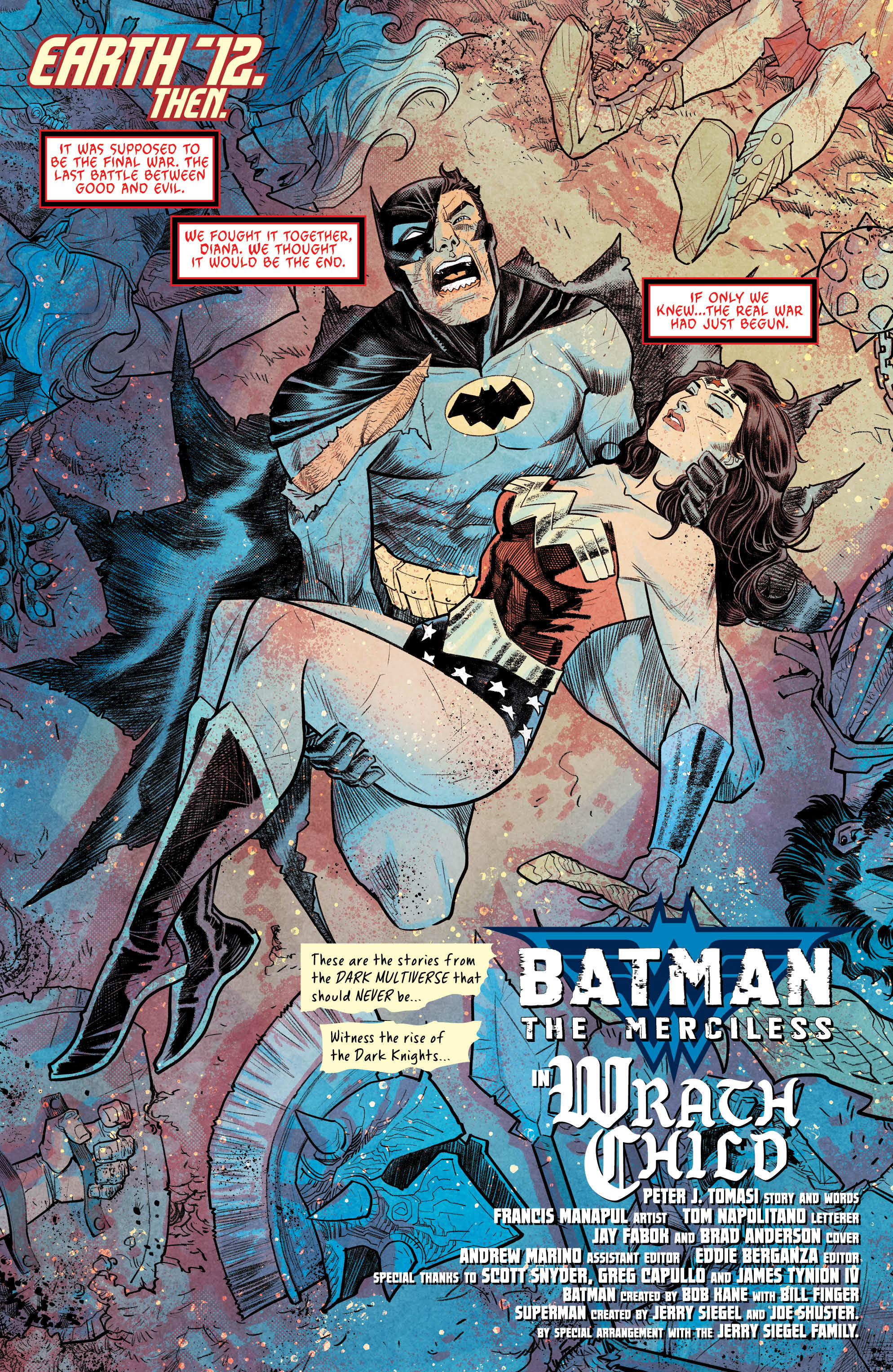 Manapul is one of the greatest artists of all time. There are many amazing artists working today. Independent titles are numerous and plentiful, giving wonderful careers to a plethora of new talents. However, there’s something to the work of a veteran. Manapul’s work creates a wondrous dream with his striking pencils and vivid colors. Batman: The Merciless #1 is another must have for any DC fan.

A Princess and her Dark Knight

Earth -12 has fallen. The God of War, Ares, has created a helm of great power. Diana and Bruce fought valiantly together against darkness, but there was ultimately some sacrifices. It took a god’s life to remove it from him. It took a hero’s life to don it and avenge the world. Peter Tomasi’s Bruce Wayne succumbs to the power of conflict and wields Ares’ helmet to give the world the protector its’ always needed. The problem is that Bruce needs his Justice League. Batman’s flaws have led him to unexpected lengths, thus leading to the Dark Knights. This Bruce’s world falls a bit too quickly, but the joyride is utterly encapsulating. 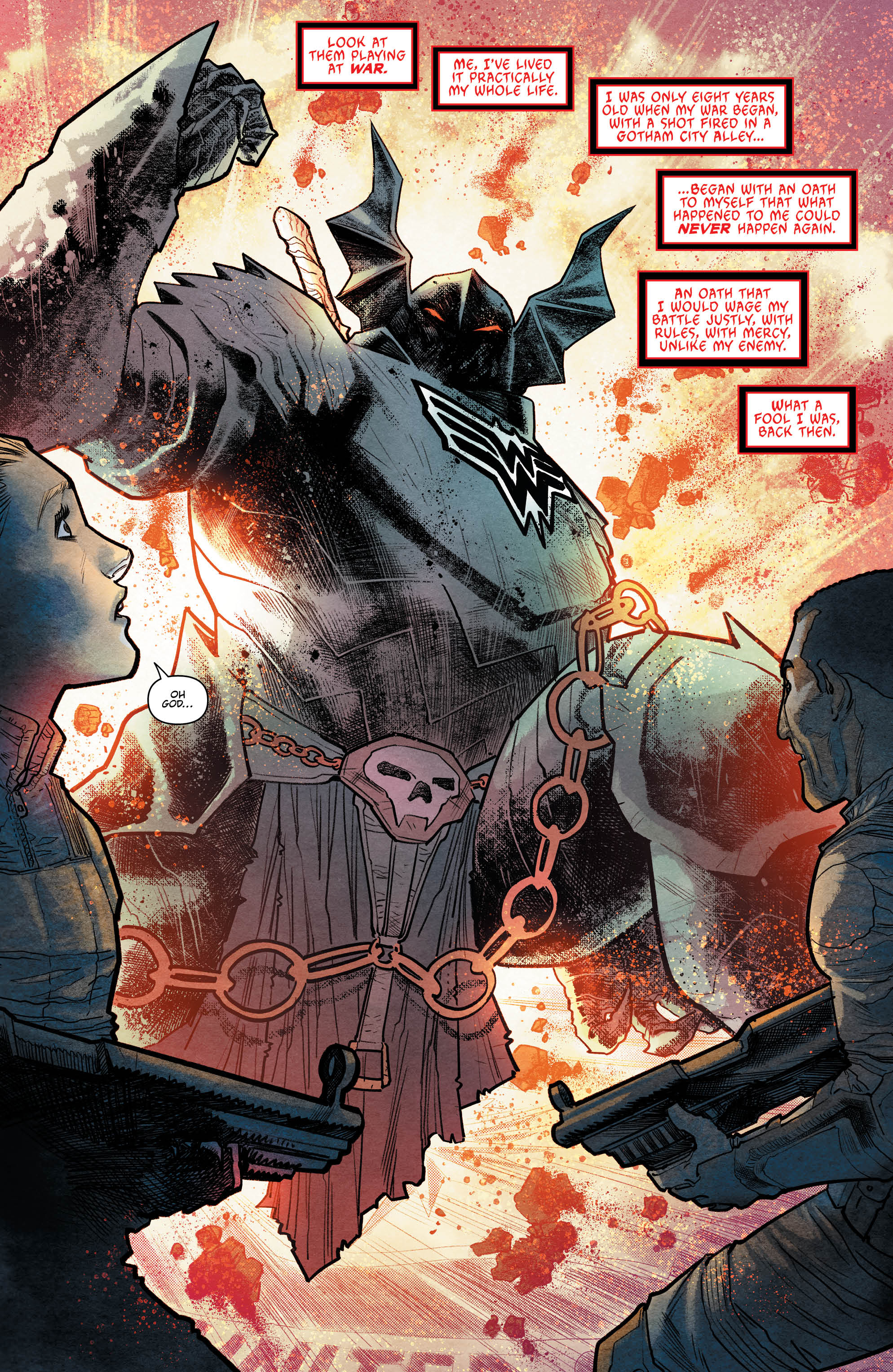 Tomasi adds more depth to the Dark Nights story. Steve Trevor is an underutilized part of the DC Universe. He’s a great addition here as Earth’s most powerful men and women meet to discuss this worldwide threat. As the Merciless Batman confronts and confounds them, Tomasi creates a mix of gripping action and horrifying violence.

A Knight in Shining Armor

Francis Manapul is remarkable. His work is the highlight of anything he puts his name on. Once again, he takes the cake as his work is nothing short of fantastic. His colors are a mix of faded pastels and 80’s band posters. It gives every page its own identity and makes any image worthy of a poster. 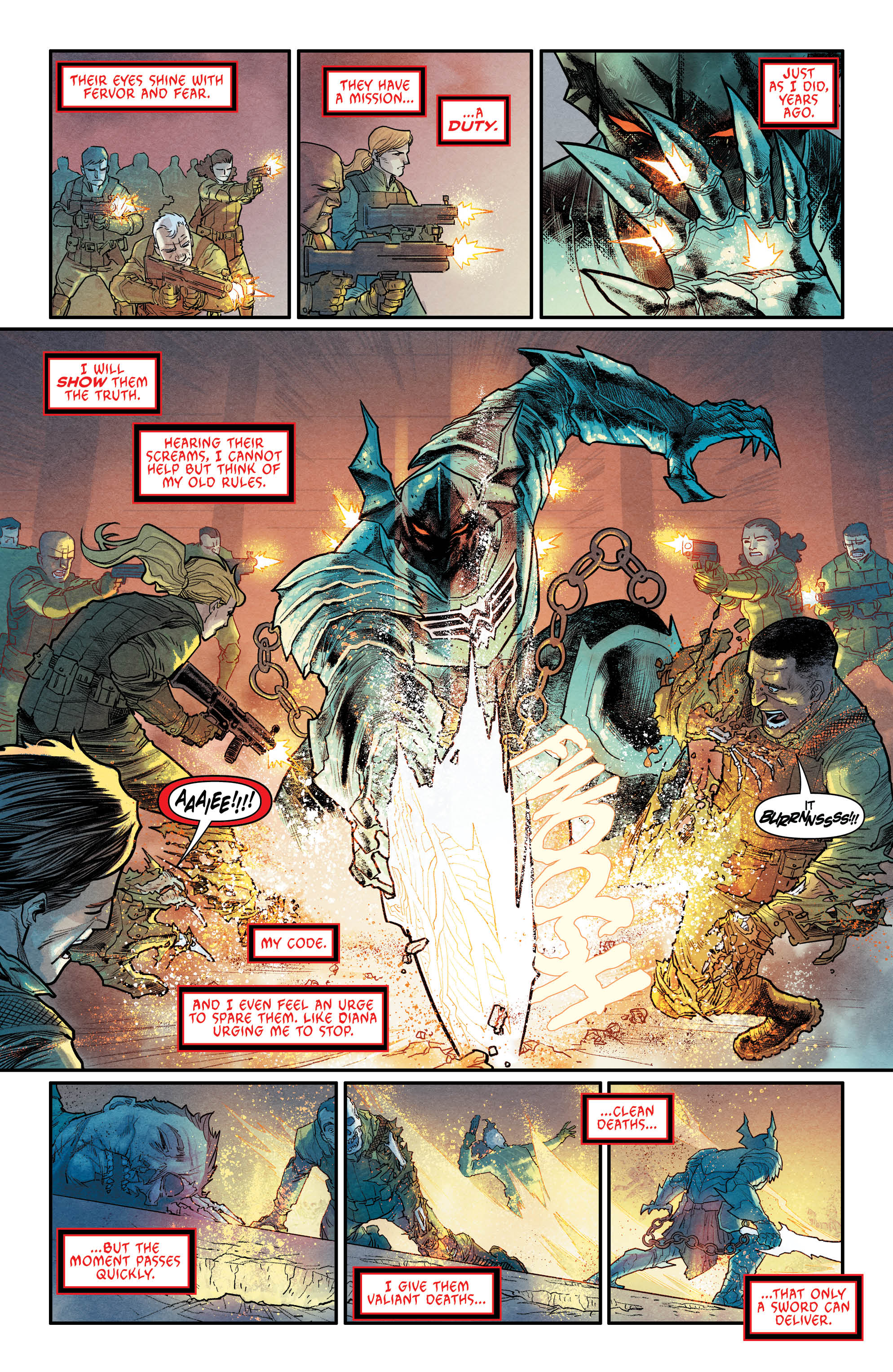 It’s difficult to discern what will eventually become a classic when reading it. But anything drawn by the hand of Francis Manapul will likely become one. The Dark Nights: Metal event has already been a successful one. The main series is incredible and all of the tie-ins have been great. But Manapul takes it to a whole ‘nother level in the pages and panels of Batman: The Merciless #1.

Batman is a popular character these days. He’s been comic’s most successful superhero for a few years, and his numerous titles reflect that. He’s been lucky enough to have the best names in comics write his adventures. As readers were just as lucky to have those stories. Another one comes in the form of Batman: The Merciless #1. It’s a destructive deconstruction of one of the more corrupted Batmen of the Dark Multiverse.

One of the Batman Who Laugh’s Robins was holding a copy of Grant Morrison’s brilliant Multiversity. In it, he tells a universe-spanning adventure that shows readers some of the smaller parts of the DC Universe. It’s a great Easter egg here, as this is another great addition to the mythology of DC’s many worlds. The incredible story by Peter Tomasi and Francis Manapul reveals the fall of an entire world at the hands of a Batman lost to the will of war.