Talia Al Ghul and Selina Kyle fighting in ancient, sandstone ruins with massive scimitars. A battle that serves as both wish fulfillment and the conclusion to The Rules of Engagement arc in Batman #35. While this would imply the action is the main focus of the issue that couldn’t be further from the truth. This entire arc is about family. Increasing the size of the Batfamily, and what that could mean for all of its members. Damian and Dick wait patiently for Batman to emerge, unaware of the situation taking place. Because in an innovative and fun way, writer Tom King has realized it’s time to tell the kids Dad’s dating again.

Joelle Jones once again joins Tom King for the issue as its’ incredible artist. Her work adds an allure and classic touch to the character that make them leap off the page. With Jordie Bellaire’s incredible colors giving further life to the pages this is another “can’t miss” issue of Batman. 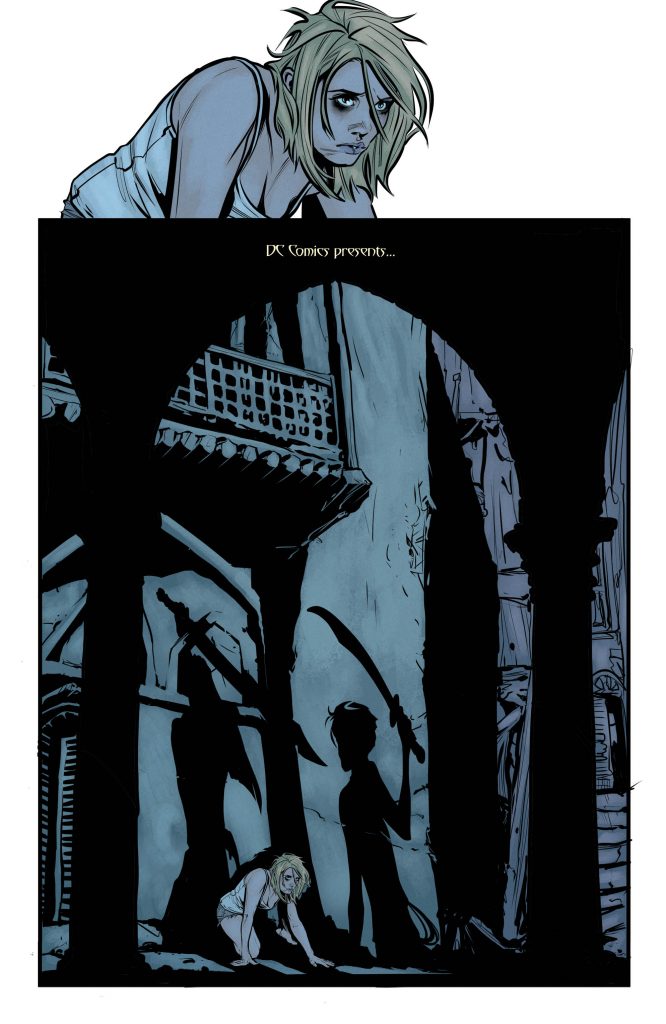 Tom King knows Batman. He has more than displayed an incredible understanding for the mind of comics’ greatest, “normal” human. But to know Batman is to know the Batfamily. The word Robin belongs after the word Batman. It’s not just a character trope, it’s a family heritage that’s passed down between brothers as they learn from their collective Father. Dick and Damian are the first and the last of that line. Here, they help to usher in a new age of Batman by being his first kids to hear the news that a new person has entered his life. And he may, may be happy.

The emotion and care within the issue is almost as important as the emotion and care that was used to create it. To give Batman hardships is a difficult thing. To give Batman emotional growth, to give him a chance at something more. Giving him new life. Now, that’s difficult. But that’s exactly what Tom King is doing. He’s giving more depth and more of an identity to one of the most prolific characters in fiction. 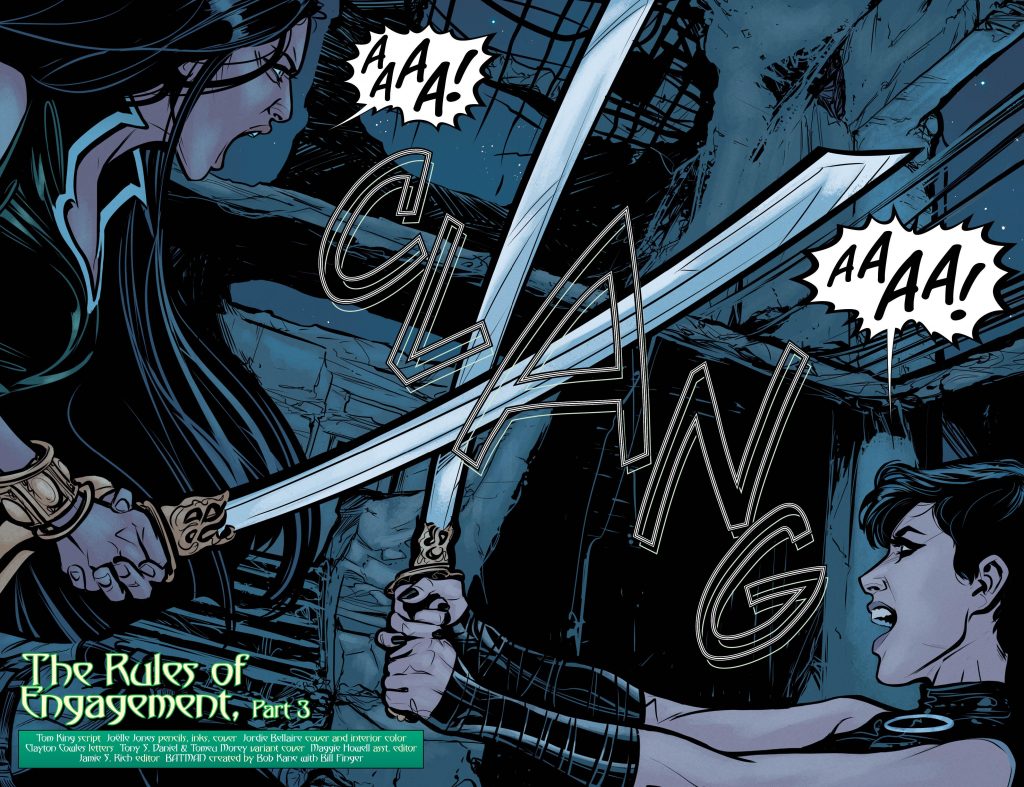 Two of comics best artists happen to be behind the look of this issue: Joelle Jones and Jordie Bellaire. Two amazing women help to bring to life an amazing, emotionally-charged battle between two of comics’ most famous femme fatales. The work is incredible. Tom King’s story only has one setting, and yet this entire arc has managed to be a gorgeous and vibrant look at an exotic desert and land not usually explored by the Dark Knight.

Along for the ride are two of his most famous Robins. Jones perfectly captures the look of every character. The subtle differences between Selina and Talia. Talia with a higher nose, better posture. Selina with small, cat-like features and a natural crouch. Jones almost perfectly translates Patrick Gleason’s nose for Damian, a perfect kid-nose for the best brat in DC Comics. They’re small touches, but ones that manage to elevate the art and establish a much more refined look for all of the characters involved.

“The Rules of Engagement” part 3 is a phenomenal finale in Tom King’s Batman #35. Batman and Catwoman are looking to move forward. They have plans; they have family. To move into the future they unfortunately need to deal with Selina’s past. While attempting to do that, they encounter Batman’s past in the form of Talia. The Mother of his Child then takes to the sword to show Batman the futility of choosing an inferior lover. Little did she know…Tom King’s Catwoman was more than enough to handle.

A clever play on a simple set-up by the ever-clever Tom King. King is already making strides and changing the status quo with his Batman run. He’s introduced new characters, altered old ones, and possibly changed some of Batman’s relationships for all time. There are some monumental moments in his run and Batman #35 continues that success. With two of comics best working artists bringing his vision to life, Tom King is one lucky writer that readers are lucky to have.